Lebanon is today marking the one-year anniversary of the port blast which devastated the capital Beirut – killing 214, leaving thousands wounded, and accelerating a near-total collapse of its economy and government.

Banks, businesses and government offices have all shut for what is officially a day of mourning, but mass protests are also planned amid anger that nobody in power has been held to account for the explosion, even 12 months on.

Large parts of the city – once known as the Paris of the Middle East – still lie in ruins after the blast, which was triggered when a fire at a port warehouse ignited tons of highly explosive ammonium nitrate fertiliser that had been haphazardly stored alongside fireworks and rolls of detonating chord.

Many fled rather than try to rebuild, such is the scale of Lebanon’s problems: A currency in freefall, rampant corruption, shortages of medicine, fuel and clean water, and ruled by a political class which has left the country without a functioning government for a year while also claiming immunity from prosecution over the explosion.

‘We are done with routine and peaceful demonstrations,’ Ibrahim Hoteit, a spokesman for families of blast victims, said ahead of today’s marches while warning they are ready to ‘break bones’. ‘Beware of our anger,’ he added.

Beirut, the capital of Lebanon and once known as the Paris of the Middle East, still largely lies in ruins a year on from the devastating blast at the city’s port 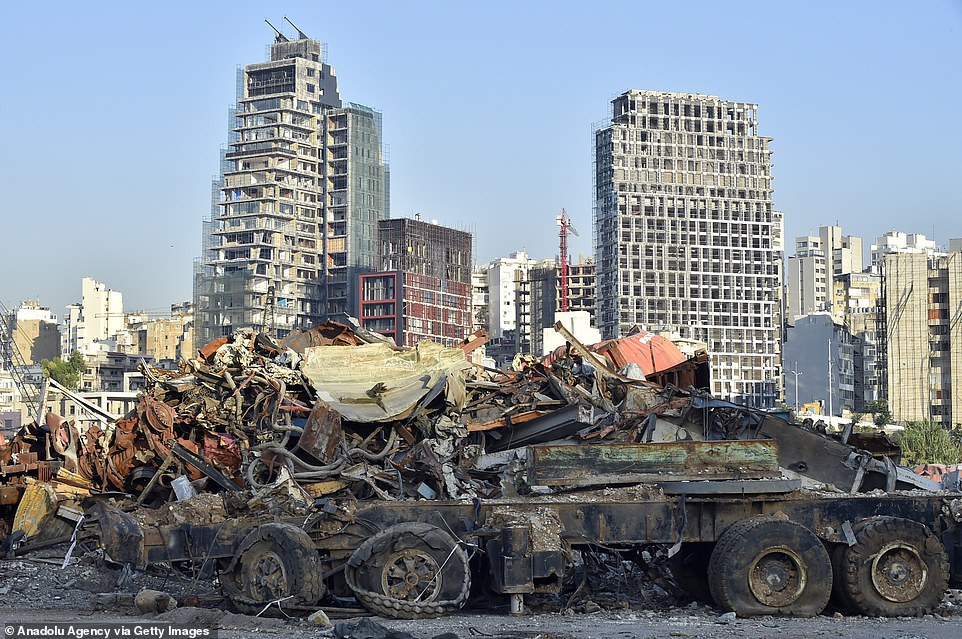 The explosion, one of the largest non-nuclear blasts ever, all-but destroyed the city’s port while the shockwave shattered windows across the city – killing 214 and wounding thousands 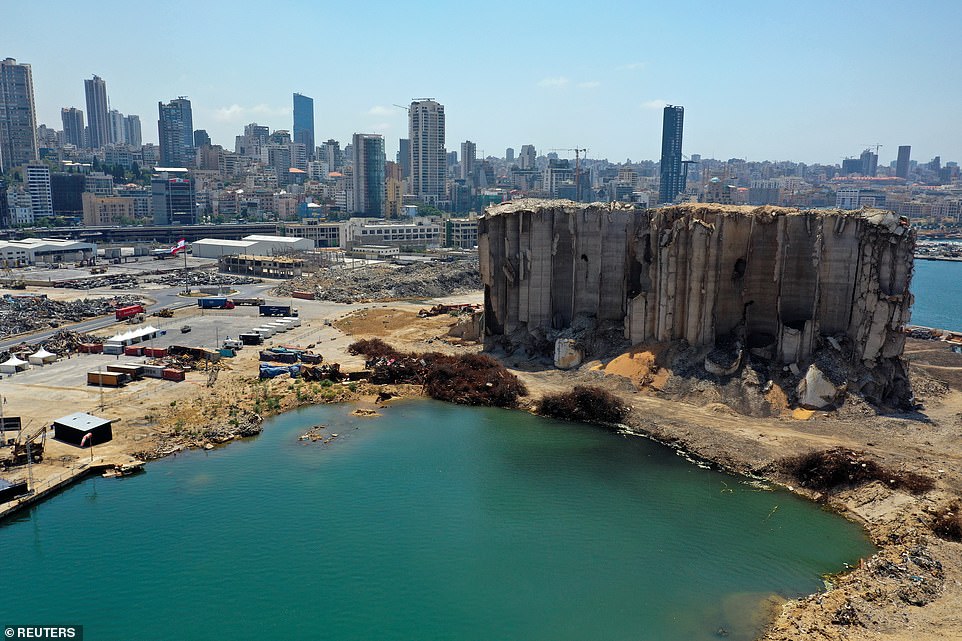 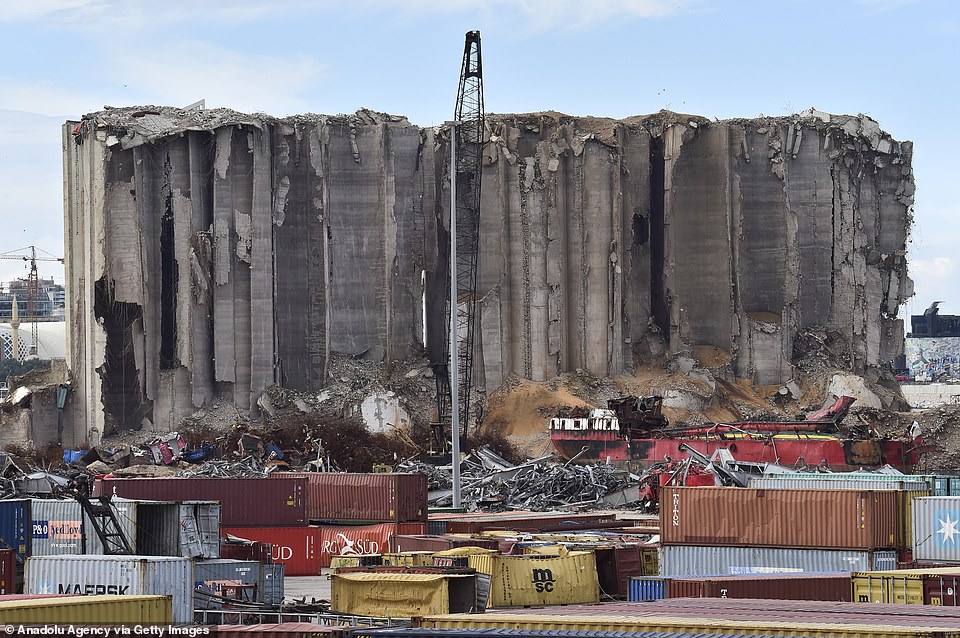 The explosion blow apart concrete grain silos at the port, which remain completely destroyed a year on from the explosion 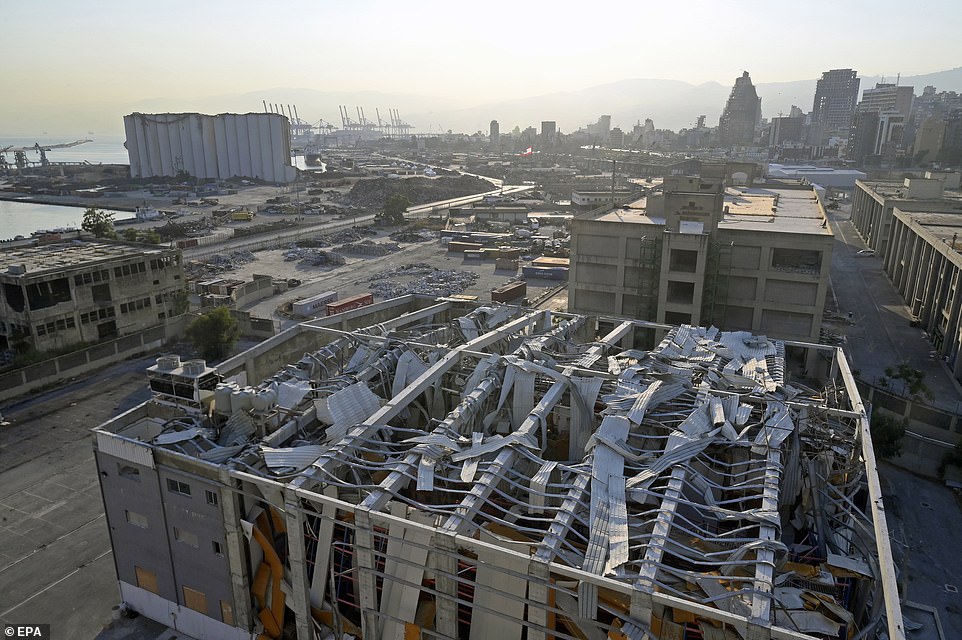 The blast has accelerated Lebanon’s economic decline, already branded one of the worst of the last 150 years by the World Bank, causing shortages of fuel, medicines and fresh water 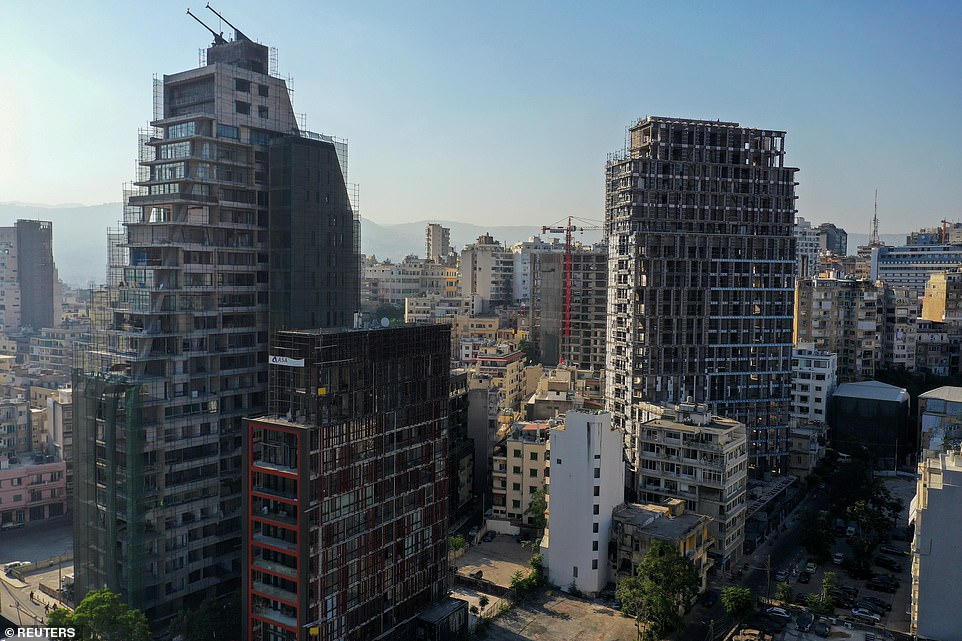 Many thousands of people have fled Lebanon rather than try to rebuild, such is the scale of the crisis facing the country which has been without a functioning government for over a year 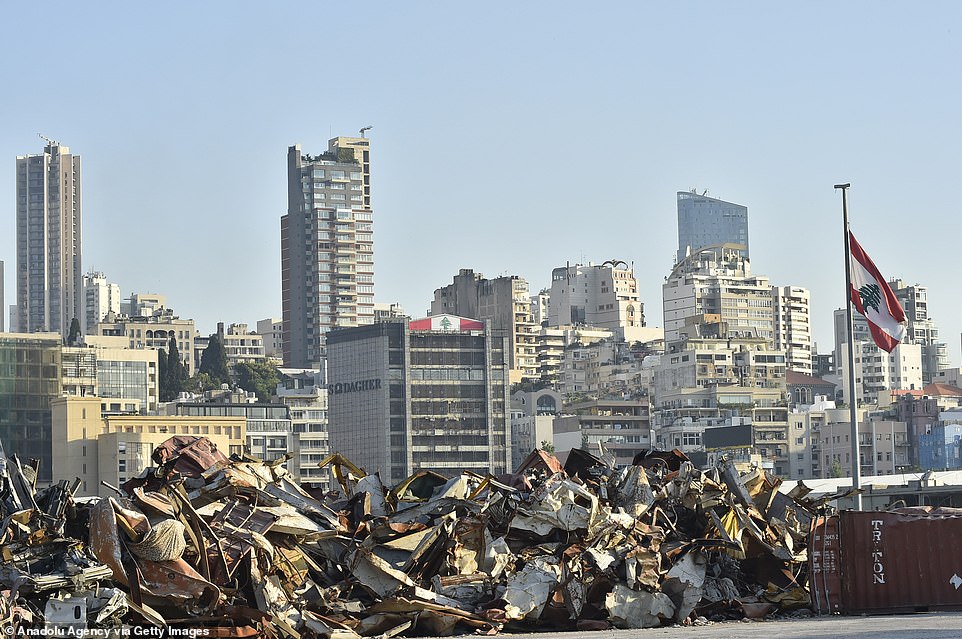 Piles of rubble are seen at Beirut’s port against a backdrop of damaged skyscrapers as the country struggles to restore a sense of normality, even a year on from the explosion

The Beirut blast, one of the world’s largest non-nuclear explosions, stuck around 6pm on August 4 2020 as commuters were making their way home from work.

Smoke already hung over the city’s port after welding work at one of the warehouses sparked a fire which emergency crews had been trying to put out.

A stream of black smoke drifting over the port suddenly turned grey and thickened, rising straight up into the air and attracting the attention of residents – some of whom trained their cameras on the plume.

Moments later, a huge explosion sent a visible shockwave racing across the city – crumpling warehouses and ships in the port, shattering the windows of nearby skyscrapers, and knocking people off their feet.

The explosion was so large that it could be felt in Cyprus, 180 miles away across the Mediterranean.

It soon emerged in documents that the highly combustible nitrates had been haphazardly stored at the port since 2014 and that multiple high-level officials over the years knew of its presence and did nothing.

A year later, there has been no accountability, and the investigation has yet to answer questions such as who ordered the shipment of the chemicals and why officials ignored repeated internal warnings of their danger.

In an extensive investigative report about the blast, Human Rights Watch on Tuesday called for an international probe, accusing Lebanese authorities of trying to thwart the investigation.

The country’s already reviled political class has hidden behind its proclaimed immunity to avoid prosecution, stalling the lead investigating judge’s work at every turn.

In a press conference on Monday, relatives of blast victims called on authorities to lift immunity within three days, warning that they are willing to ‘break bones’ in upcoming protests. 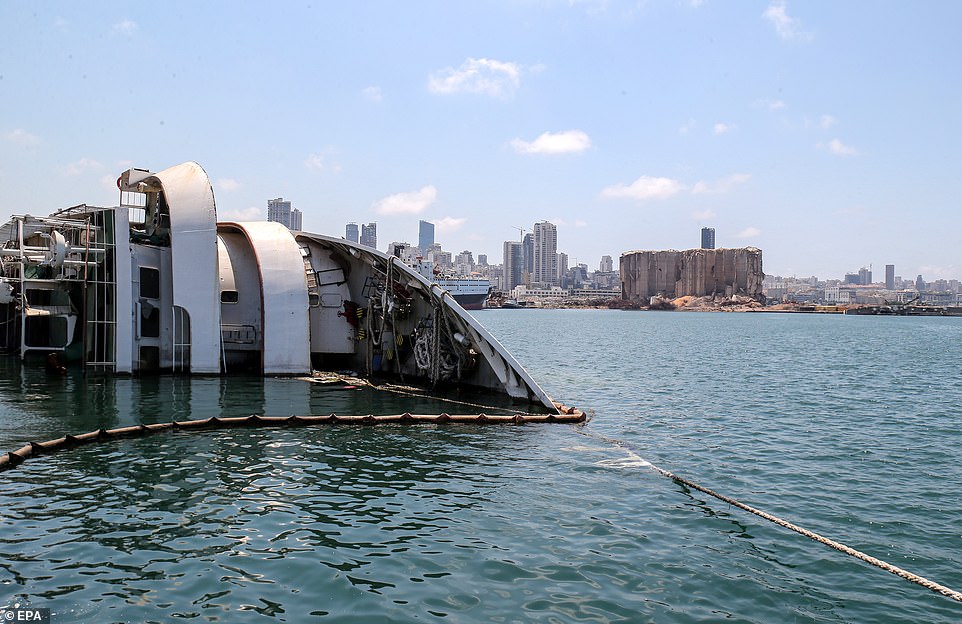 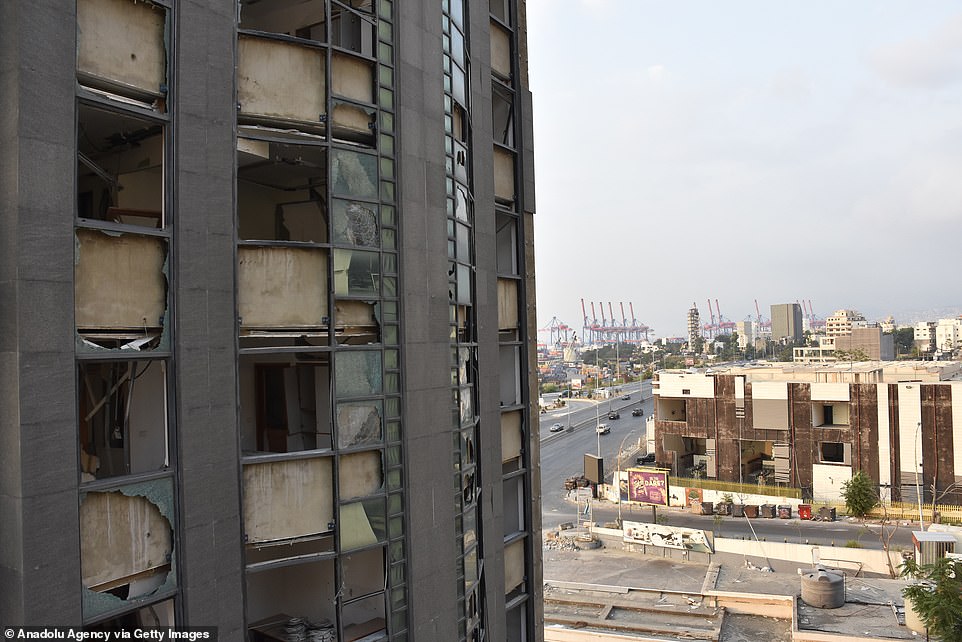 Lebanon is officially marking a day of mourning today, but protests are also planned which could turn violent 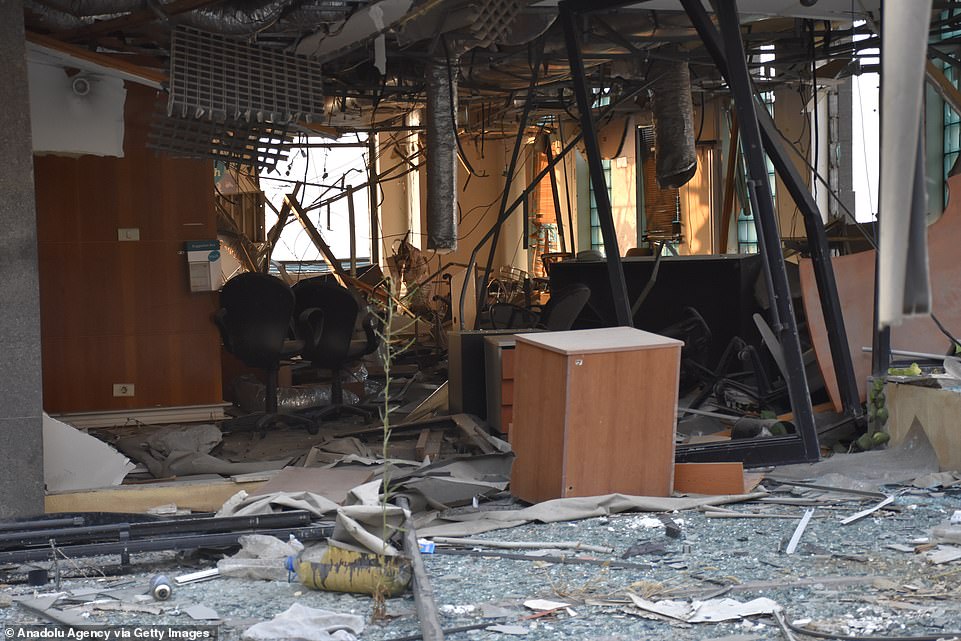 Buildings in the Gemmayzeh neighbourhood, one of Beirut’s most-popular before the explosion, are almost totally wrecked even one year on from the disaster 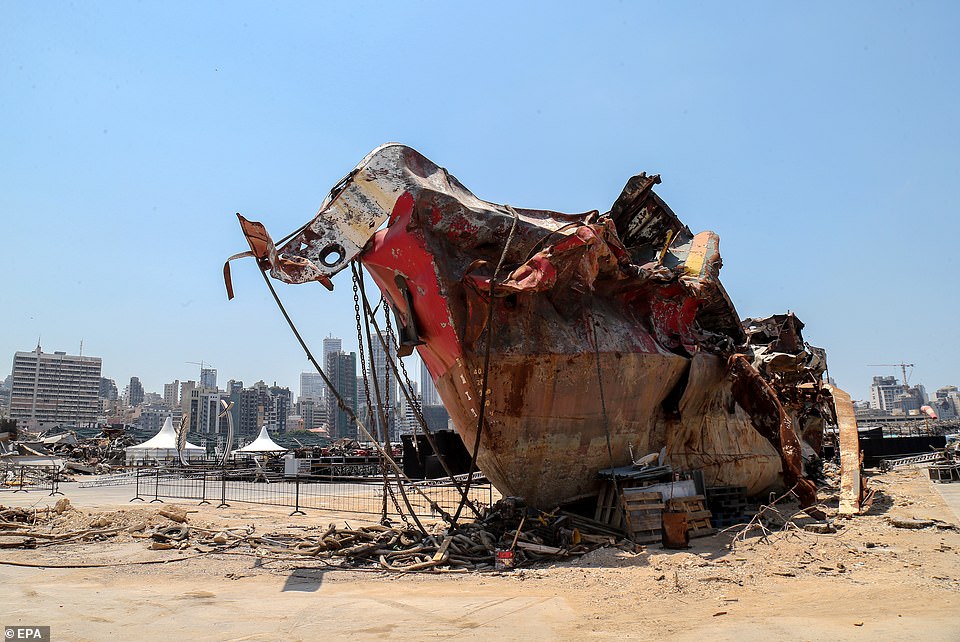 The sheer force of the explosion can been seen in the remains of this ship, which was bent and buckled out of shape 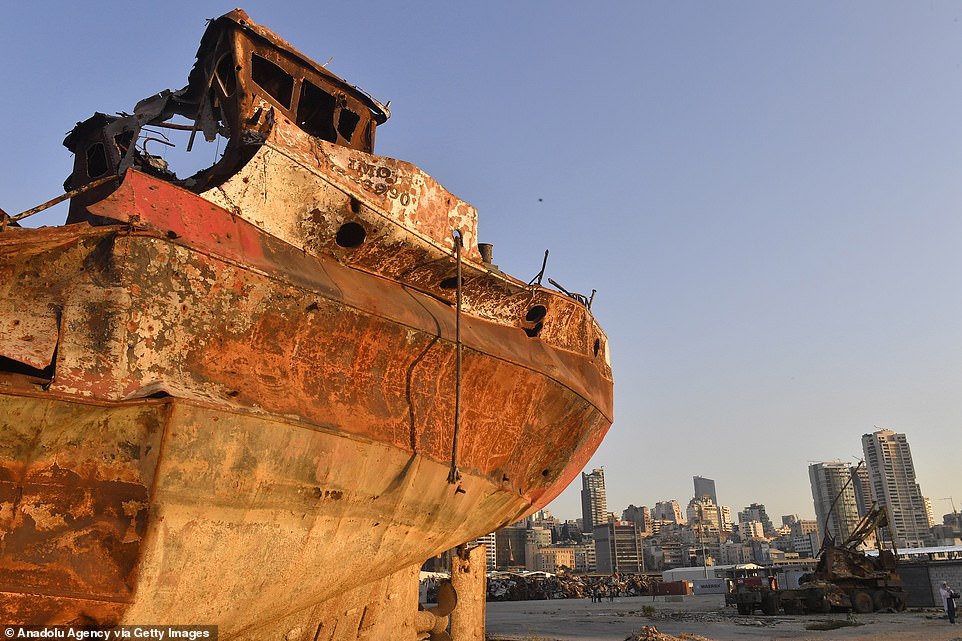 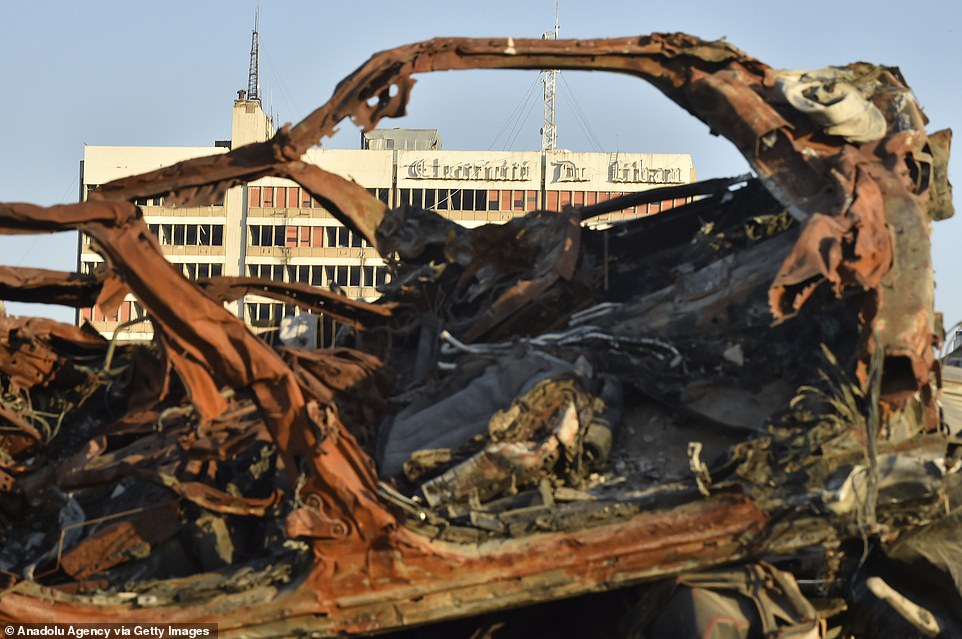 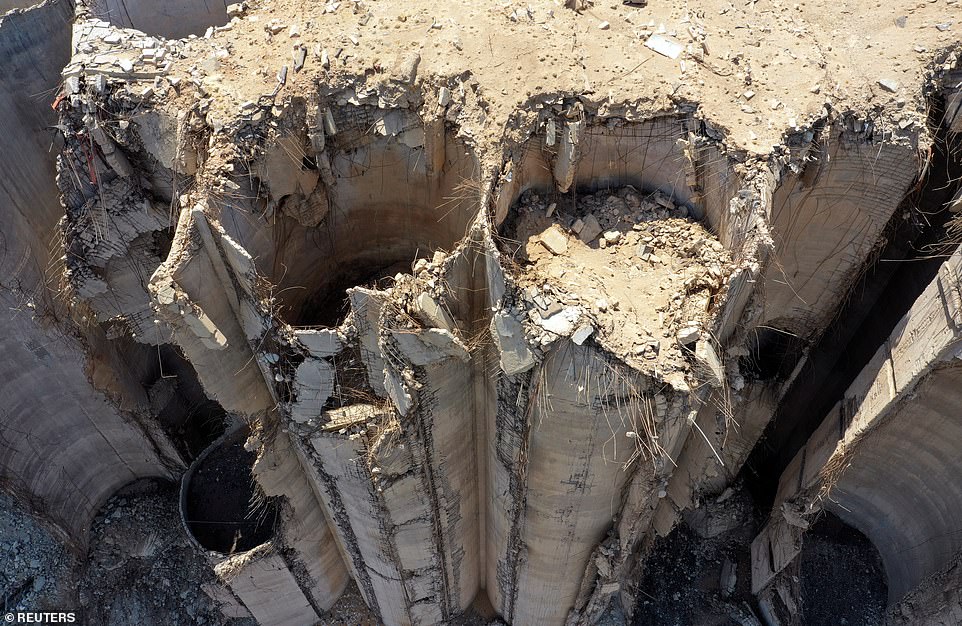 One protest is due to wind up in front of parliament, where no move has been taken towards accepting accountability.

Lebanon’s parliamentarians – some of whom have been nicknamed the ‘nitrate deputies’ on social media – are ignoring intense international pressure and threats of sanctions.

They have yet to agree on a government lineup despite being given a mid-September deadline last year by Paris, which has spearheaded an aid drive conditioned on reform.

A first donor conference for Lebanon in the immediate aftermath of the blast collected $330million.

Emmanuel Macron, who has been leading fundraising efforts for the former French colonial territory, will push for more aid at another international conference co-hosted by the UN today, hoping to gather another $350 million.

Pope Francis, speaking today at his first general audience since he underwent intestinal surgery a month ago wished Mr Macron success with his fundraising efforts while adding that he has a ‘great’ desire to visit Lebanon.

Francis said many in the country, which is facing a grave economic crisis, had lost the will to live. Donors should help Lebanon ‘on a path of resurrection’, he said.

Lebanon’s descent into chaos had already started before the port blast, with a bankrupt state trapping people’s savings in banks and the national currency nosediving on the black market.

The country is now facing medicine, fuel and clean water shortages that are compounding the national post-blast trauma, crippling a health sector facing a new wave of Covid infections.

The crisis has led to a dramatic currency crash and hyperinflation, plunging more than half the country’s population below the poverty line with the World Bank describing Lebanon’s collapse as one of the most dramatic in the last 150 years. 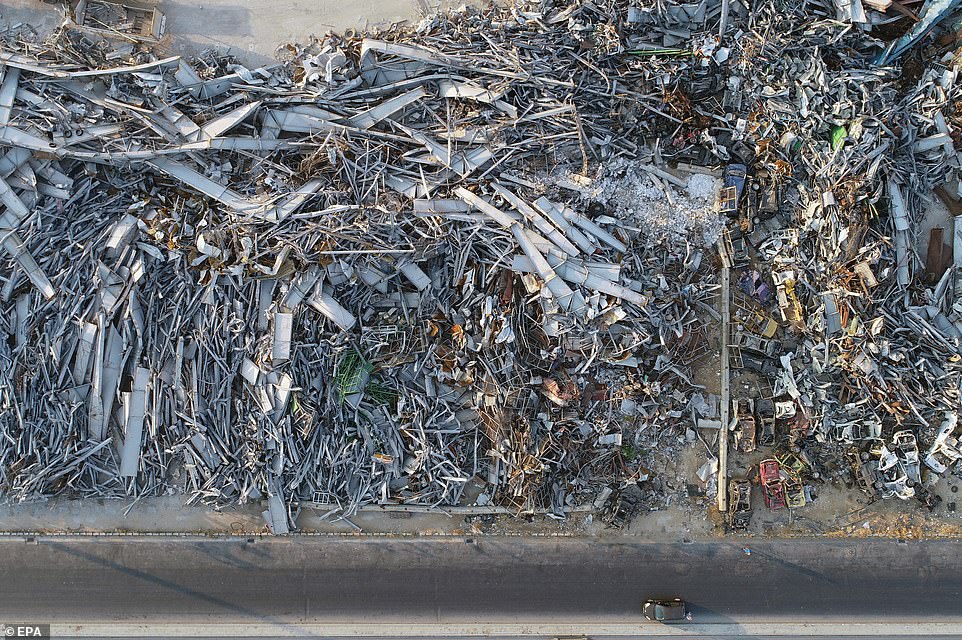 Heaps of twisted metal are seen piled up at the city’s port, which is still largely out of action 12 months on from the explosion 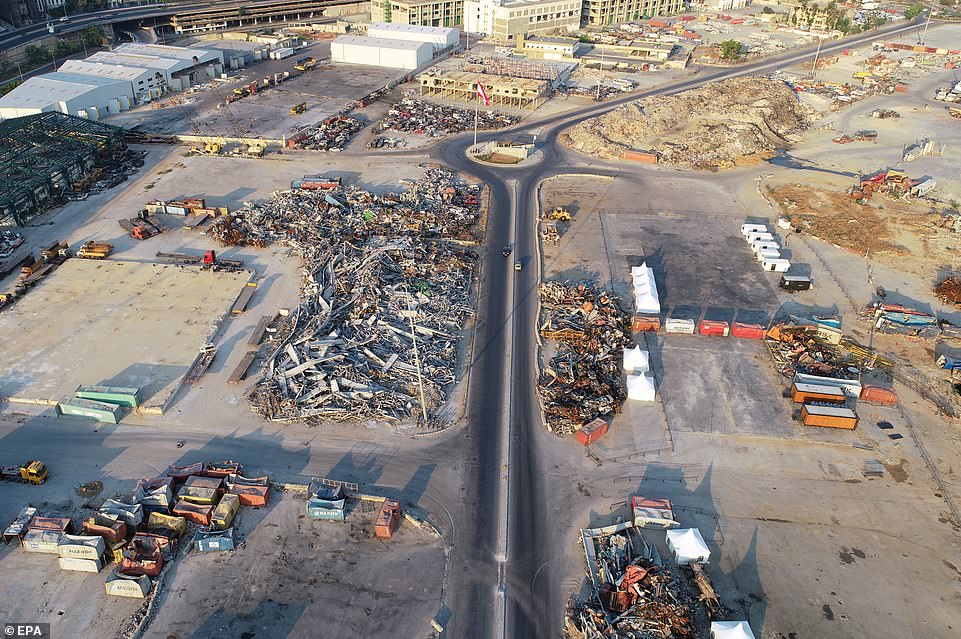 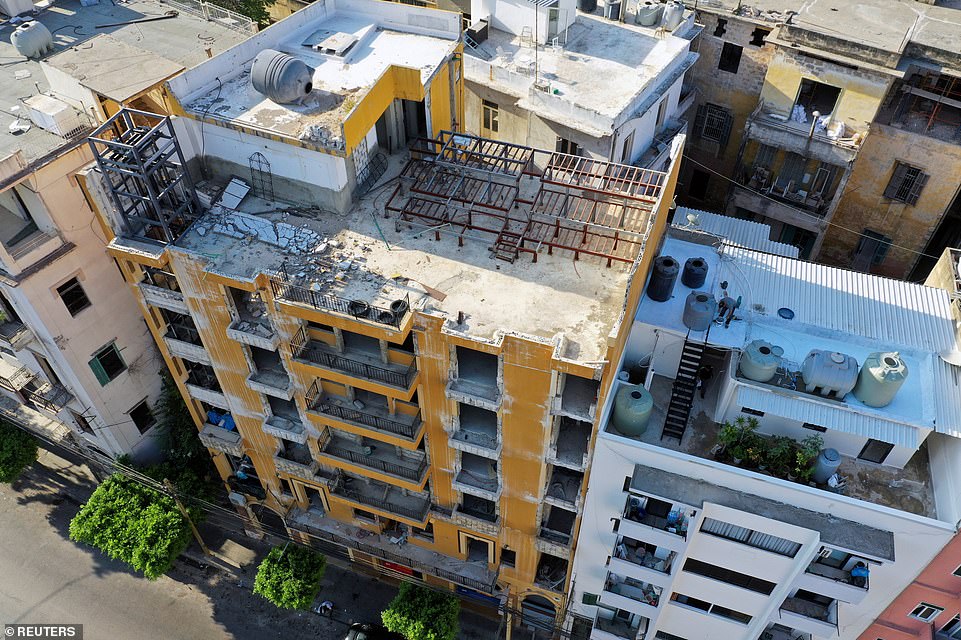 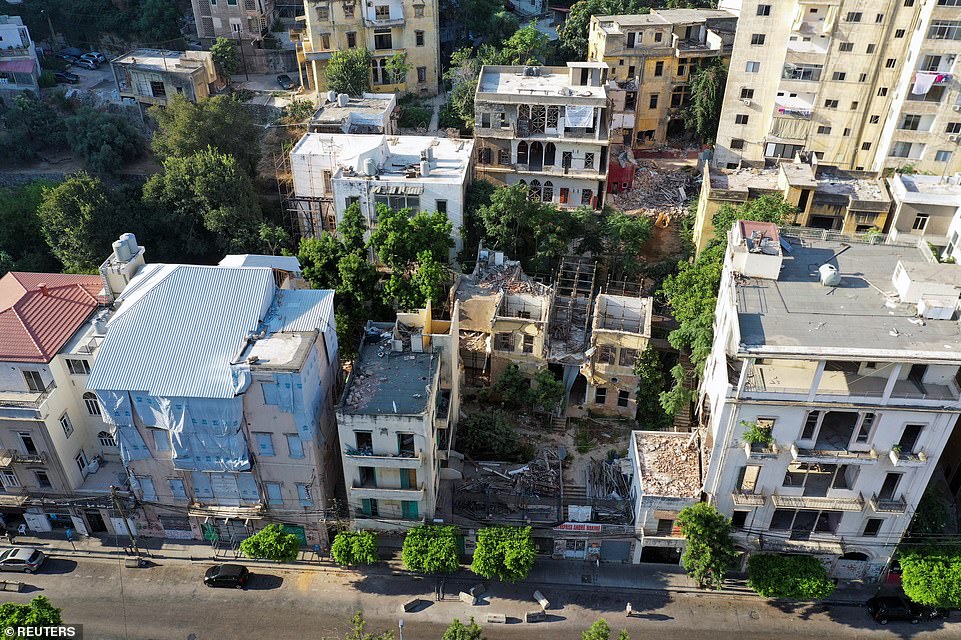 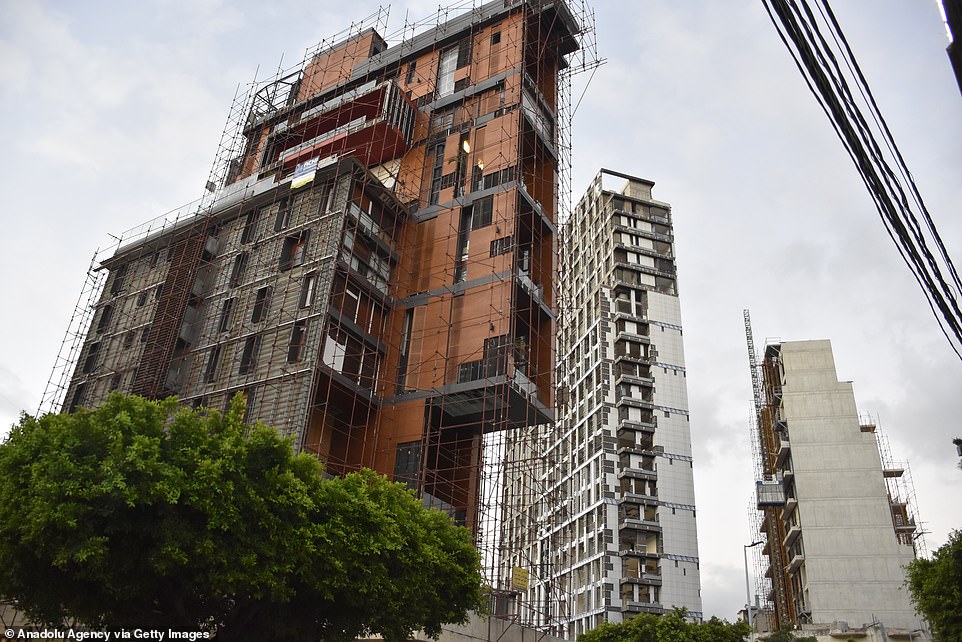 Repair works are carried out on a building in Gemmayzeh, one of Beirut’s most-popular neighbourhoods 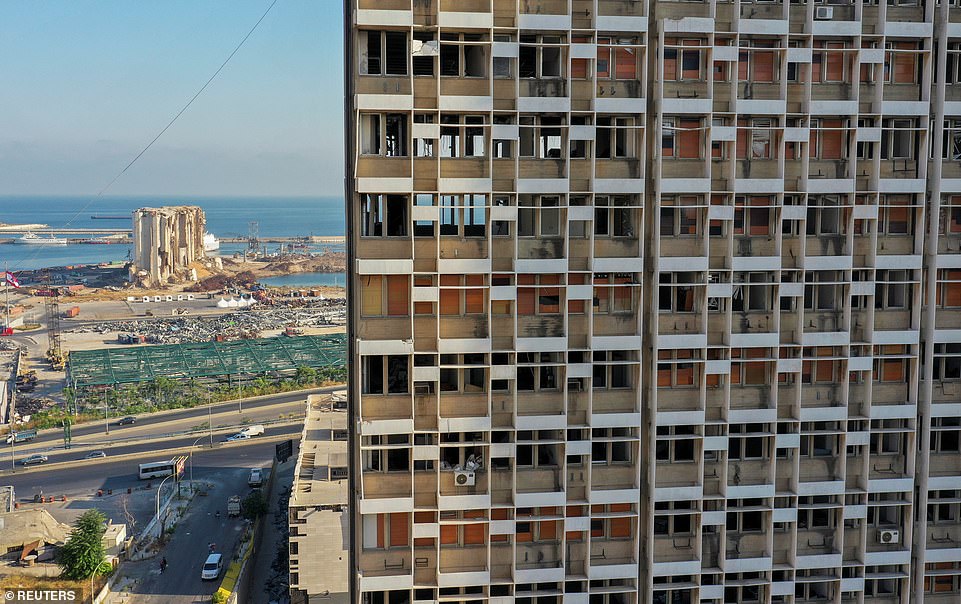 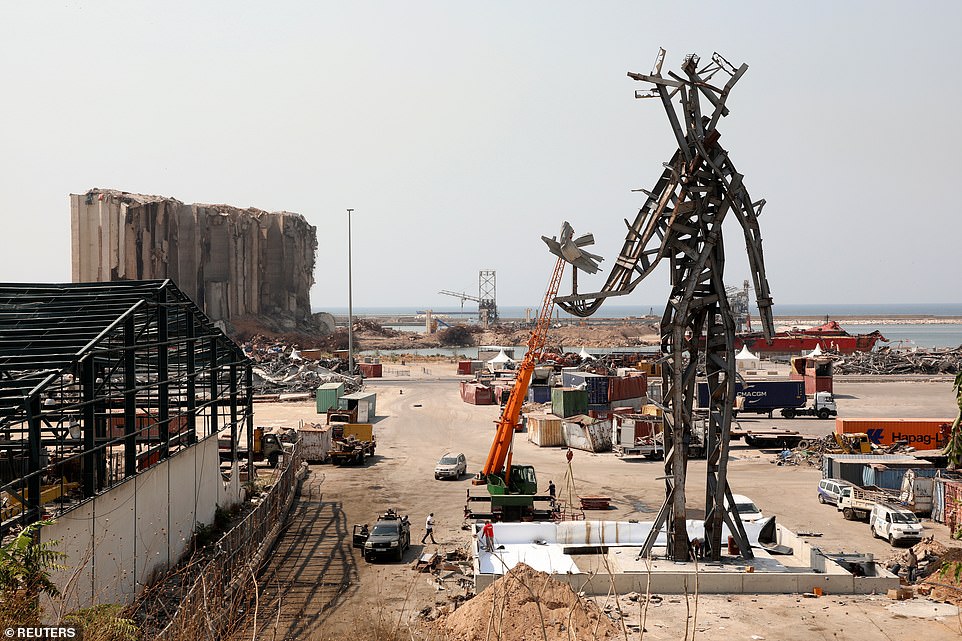 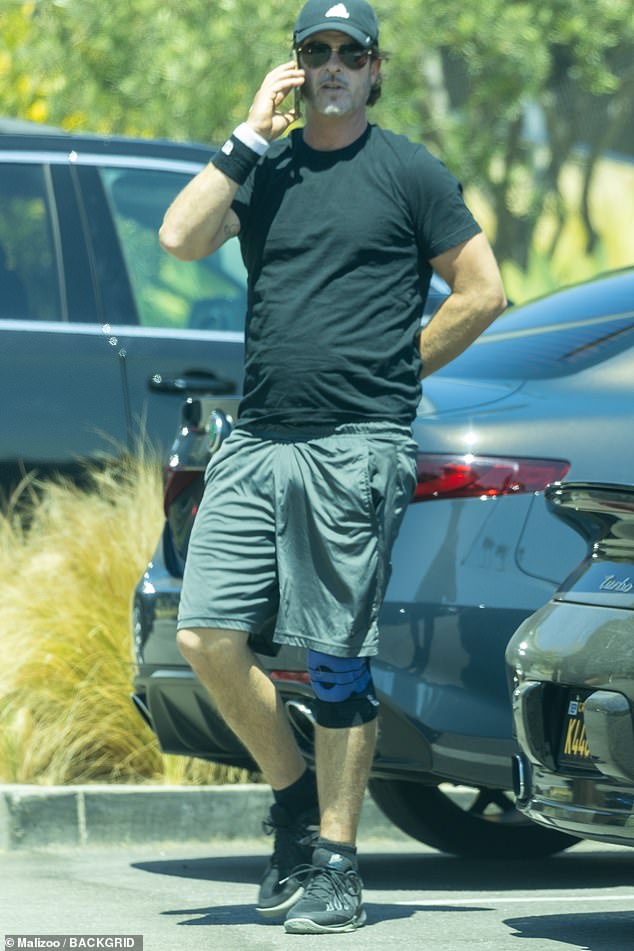 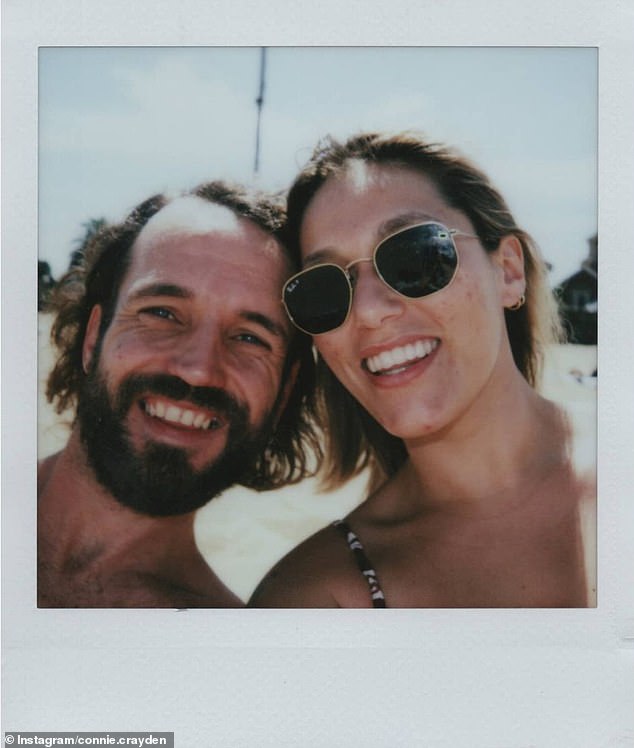 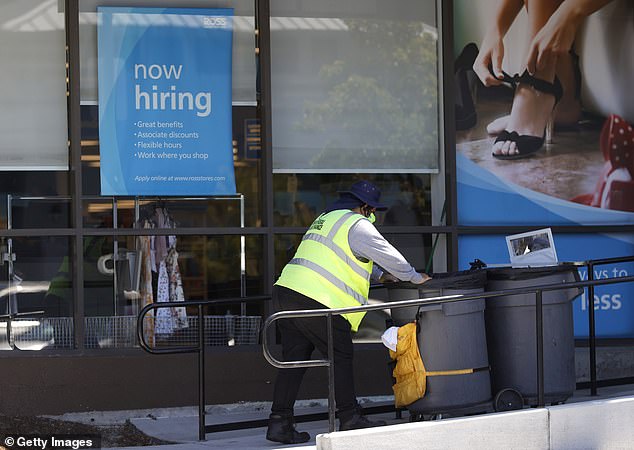 Half of all COVID unemployment relief was stolen, experts claim 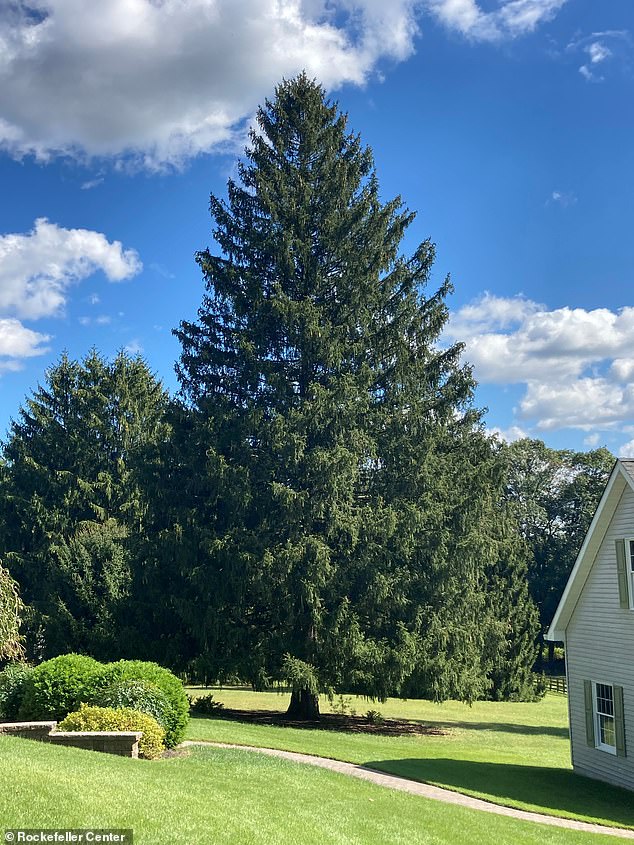