After a long winter, Las Vegas’ famous pool parties are back – though anyone going to one of the bashes on the Strip this spring can expect a scaled down, socially distanced version.

Several of the city’s largest swimming pools are opening up beginning on Monday while others are allowing guests later in March.

Normally, Vegas pool parties are notorious for their alcohol-fueled, dance club-like atmospheres in which swimmers are packed into the water like sardines with hardly any room to move.

The image above shows a pool party at Park MGM Casino and Resort in Las Vegas in April 2019. The venue will open this Monday for the start of pool party season, though coronavirus restrictions will limit attendance to 35 per cent capacity 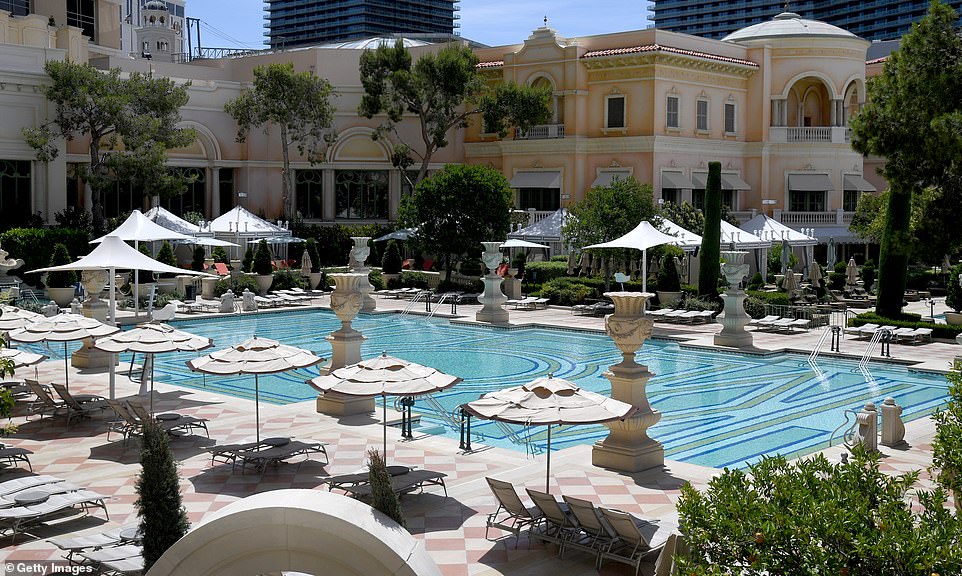 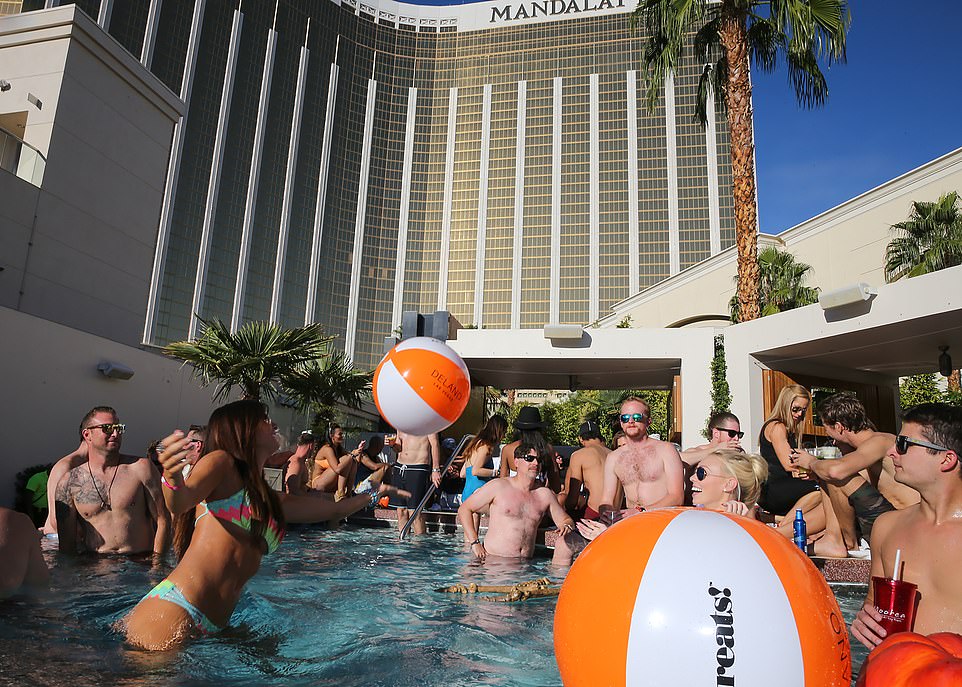 Revelers enjoy themselves at the pool at the Delano hotel in Las Vegas in this 2015 file photo. The Delano Beach Club will be open at 10am on Monday 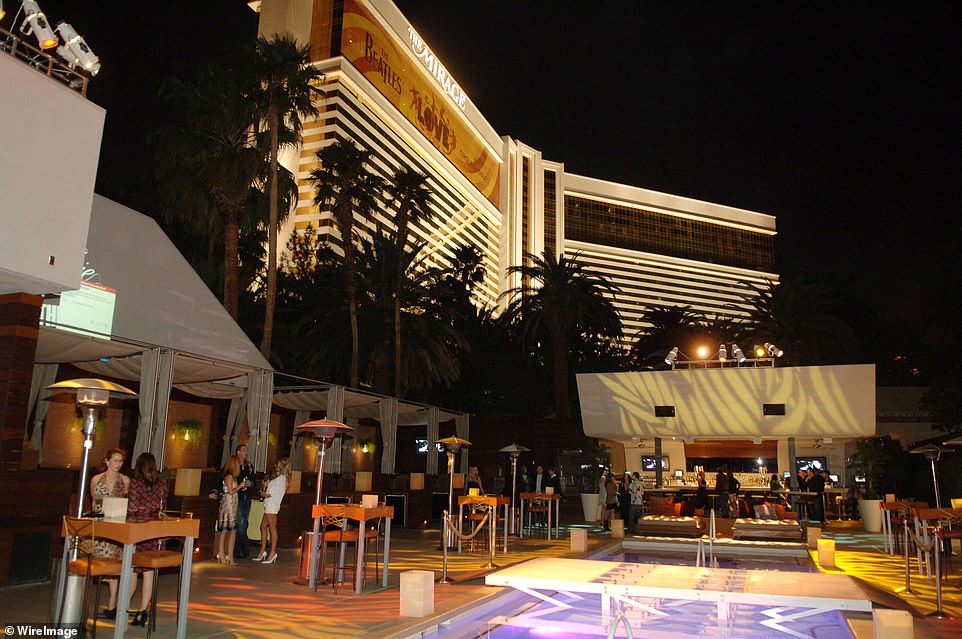 The file photo above shows the Bare Pool Lounge at The Mirage Hotel and Casino Resort. The Bare Pool will also open this coming Monday

But the coronavirus pandemic forced the state to impose restrictions on businesses, including casinos and resorts that are vital to Nevada’s tourism industry.

The resorts are requiring guests to wear masks while limiting capacity at the pools to 35 per cent. On March, 15, capacity will be lifted to 50 per cent – just in time for several more venues to open up their doors.

The Stadium Swim pool at Circa is even allowing guests ages 21 and over into the facility now, according to the Las Vegas Review-Journal.

The Cosmopolitan of Las Vegas Pool District is also open to the public. The Boulevard Pool is open Mondays through Sunday from 9am to 5pm.

The Cosmopolitan is also offering ‘dive-in movies’ at the Boulevard Pool. The films will be screened on 65ft-high digital marquees. 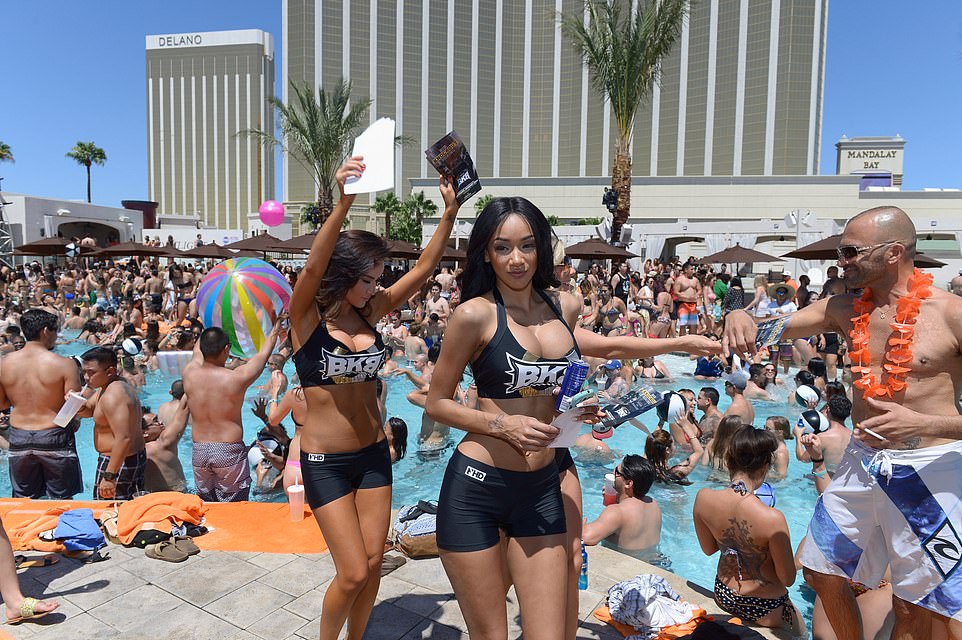 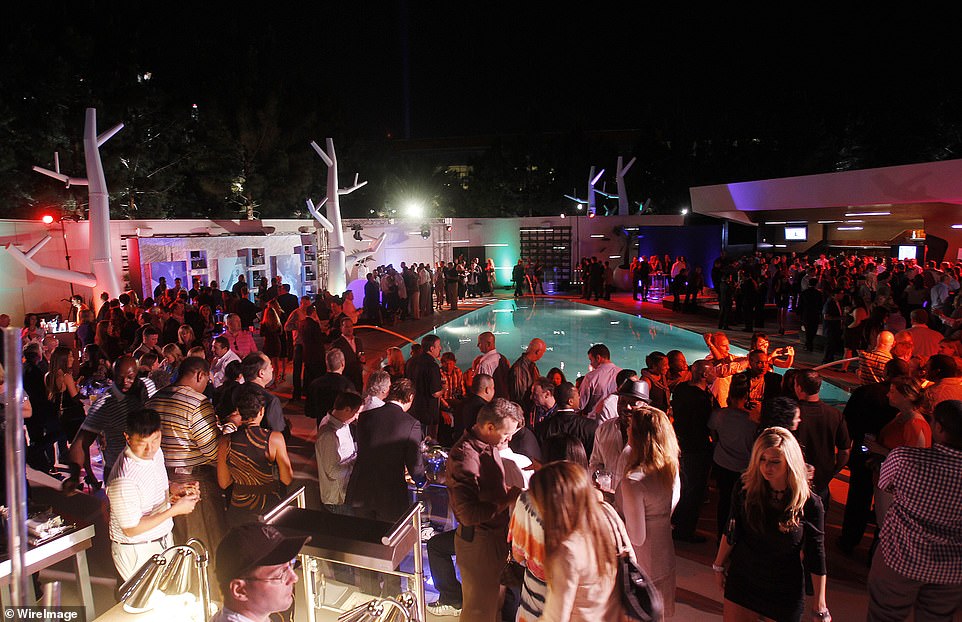 The Bellagio, the Delano, the Mirage, and Park MGM are all making their swimming pools open to the public beginning on Monday morning.

The Mediterranean Pool at the Bellagio and the Delano Beach Club will be open at 10am on Monday. Guests at both venues must be at least 14 years of age or accompanied by a parent of at least 18 years.

The Bare Pool Lounge at the Mirage also opens on Monday starting at 10am. Guests must be at least 21 years of age.

Park MGM has placed no age restrictions for its pool. It opens on Monday at 9am.

Mandalay Bay’s Daylight Beach will be open starting next Friday, though the pool will only be available from Fridays through Sundays. Guests must be 21 and over.

The MGM Grand’s West Republic Ultra Pool will open its doors next Friday starting at 11am. The pool will be open throughout the spring and summer from Thursdays through Sunday. Ages 21 and over are welcome.

The Encore Beach Club at Wynn Las Vegas opens next Friday at 11am. Its pool operates Fridays through Sundays.

Chelsea Pool opens its doors on March 12. It will expand its hours of operation to 8am – 6pm daily beginning on March 22. 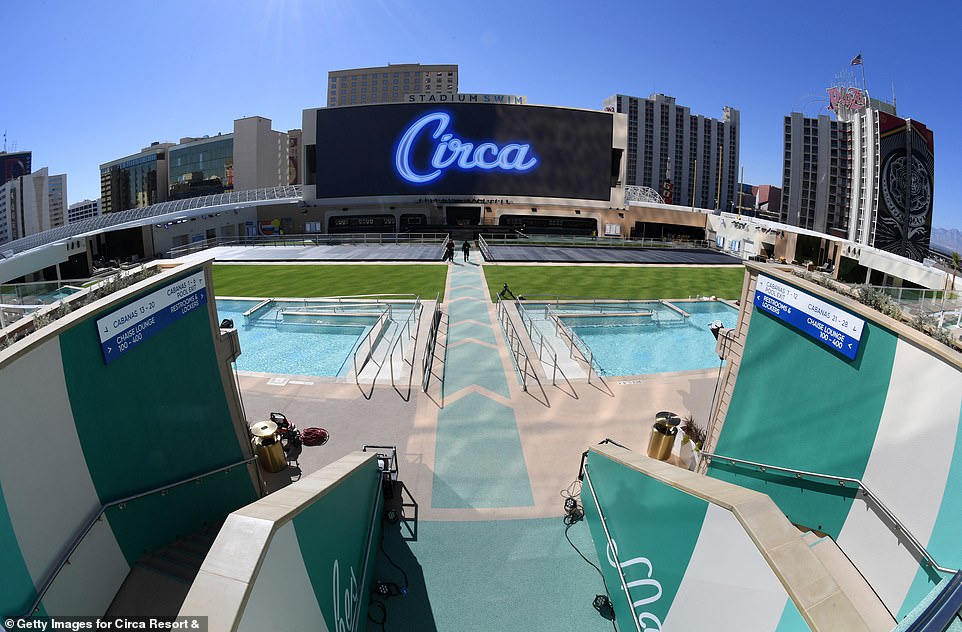 The Stadium Swim rooftop pool complex is shown before the grand opening of Circa Resort & Casino on October 27. Stadium Swim is currently open to the public 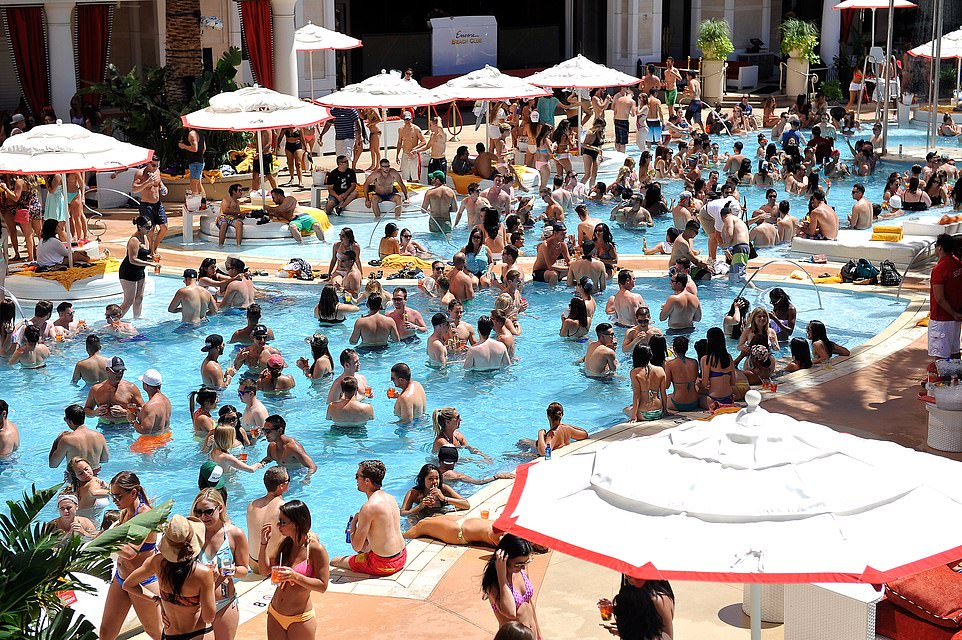 The Encore Beach Club (seen in the above 2014 file photo) at Wynn Las Vegas opens next Friday at 11am. Its pool operates Fridays through Sundays

Las Vegas and other towns in Nevada that rely on tourism have been battered financially by the pandemic.

Las Vegas Strip casinos are continuing to suffer effects, according to a monthly report from state regulators, but northern Nevada and parts of the state that attract local and drive-in gamblers are showing signs of recovery.

The Nevada Gaming Control Board reported on Thursday that casinos statewide took in almost $762million in January, down 26.6 per cent compared with the same month a year ago.

House winnings at Strip properties were down almost 44 per cent in January compared with a year ago.

That was before the pandemic prompted closures and stopped a stretch of three months when casinos won more than $1billion. 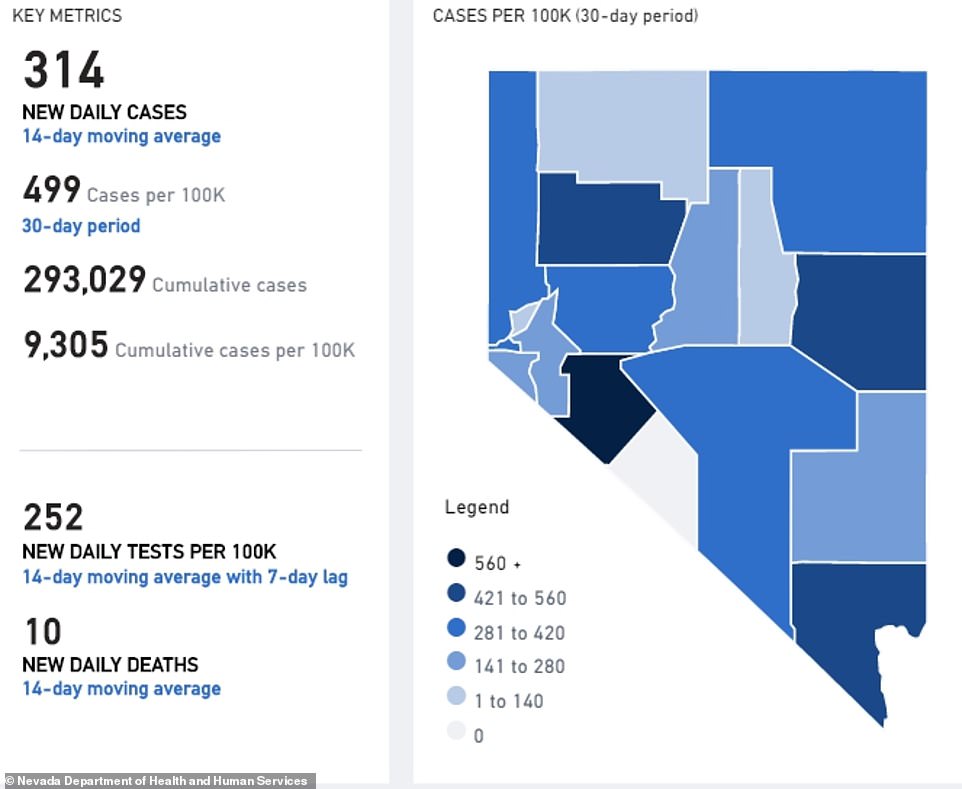 Since the start of the pandemic, more than 293,000 residents of Nevada have tested positive for COVID-19 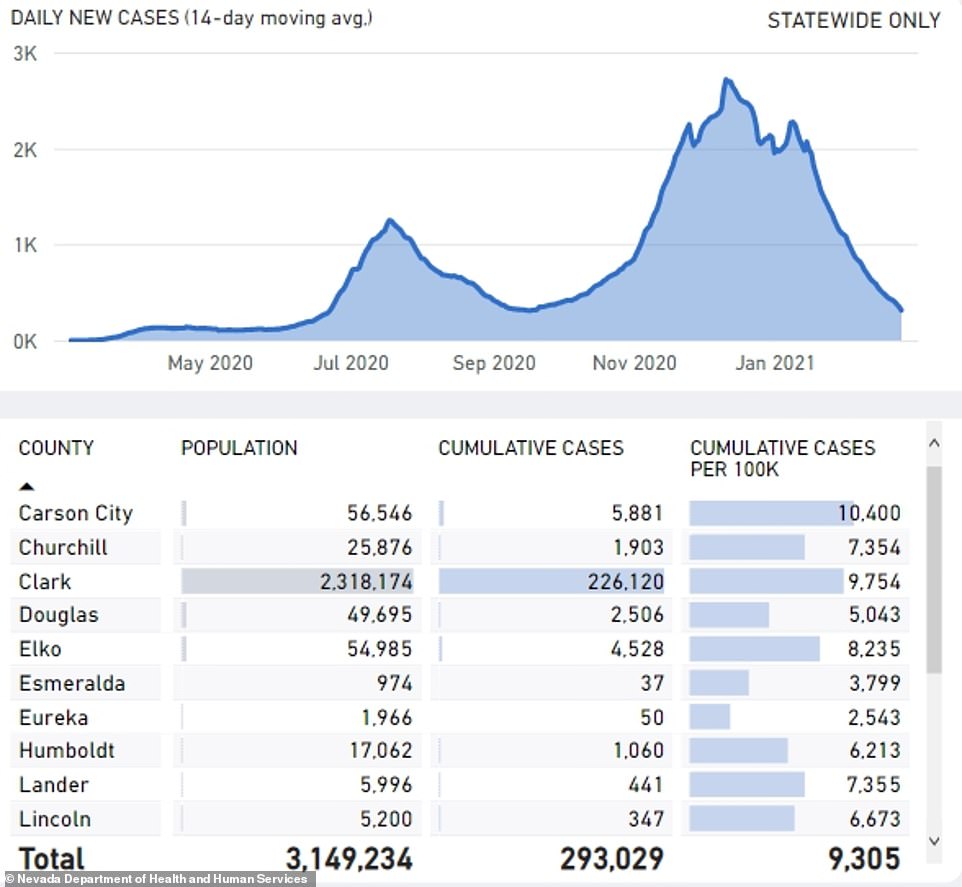 Similar to the overall trend in the rest of the United States, officials in Nevada report a decrease in the number of positive tests 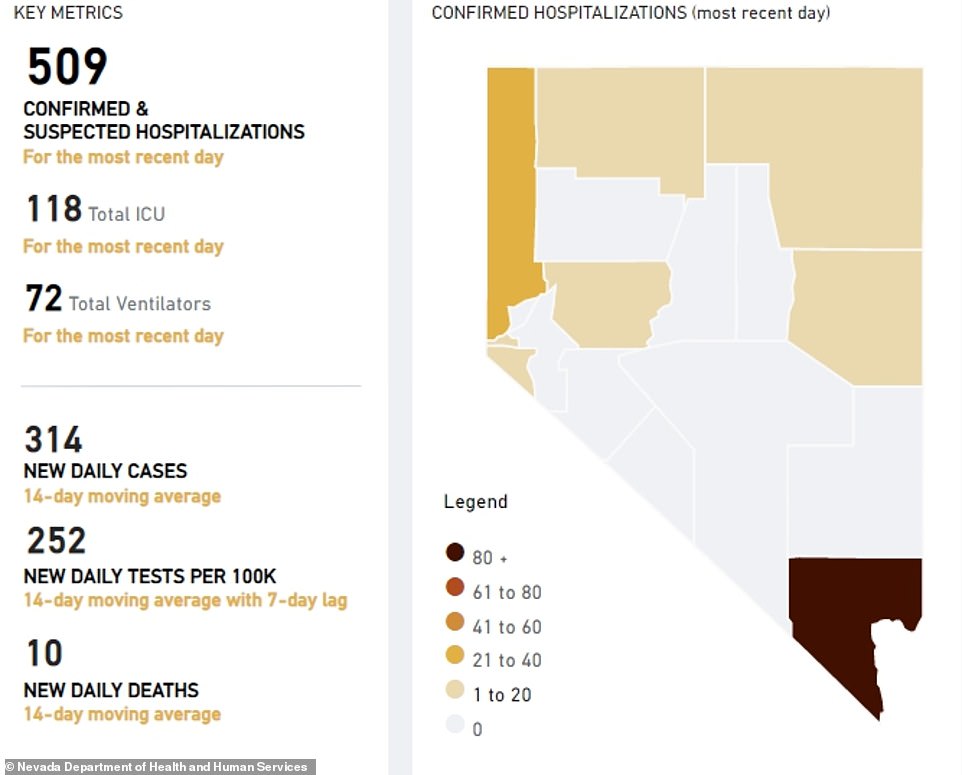 As of Friday, there were 509 hospitalized people who were either confirmed to have been infected with COVID-19 or suspected to have the disease 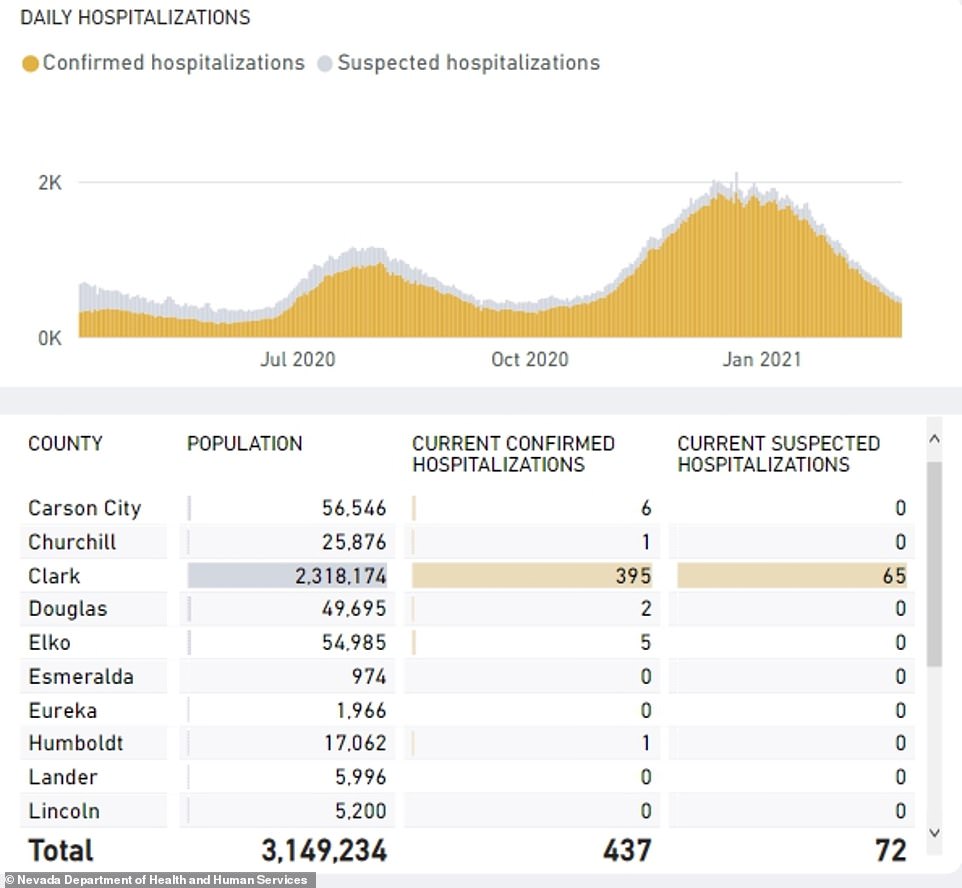 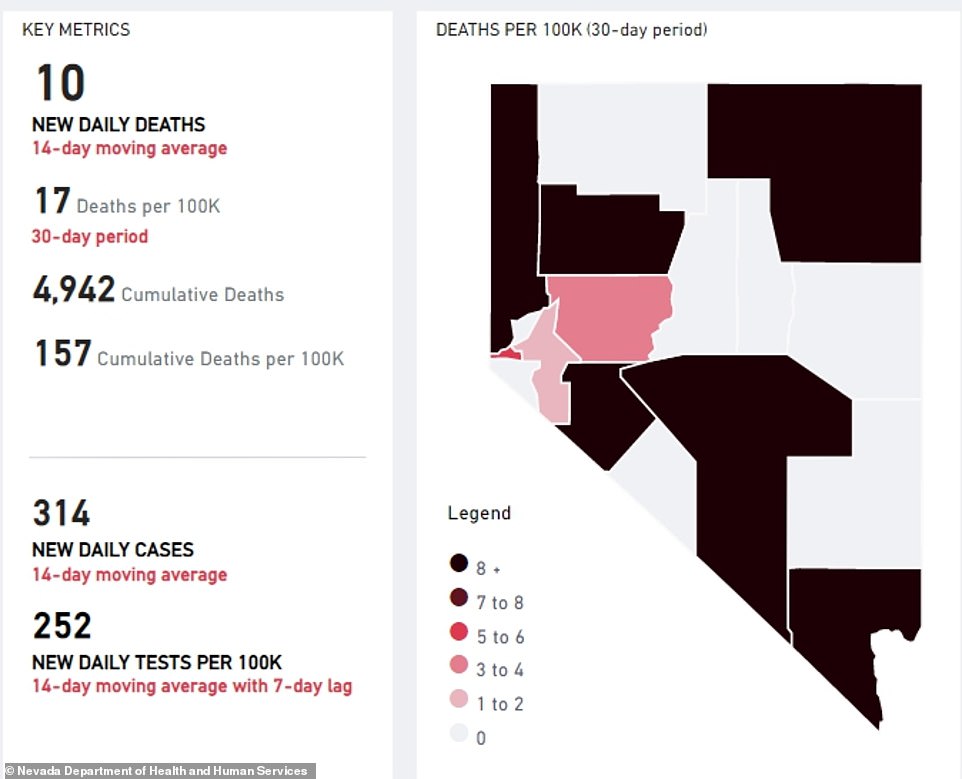 Since the start of the pandemic, 4,942 people in Nevada have died of COVID-19, according to state health officials 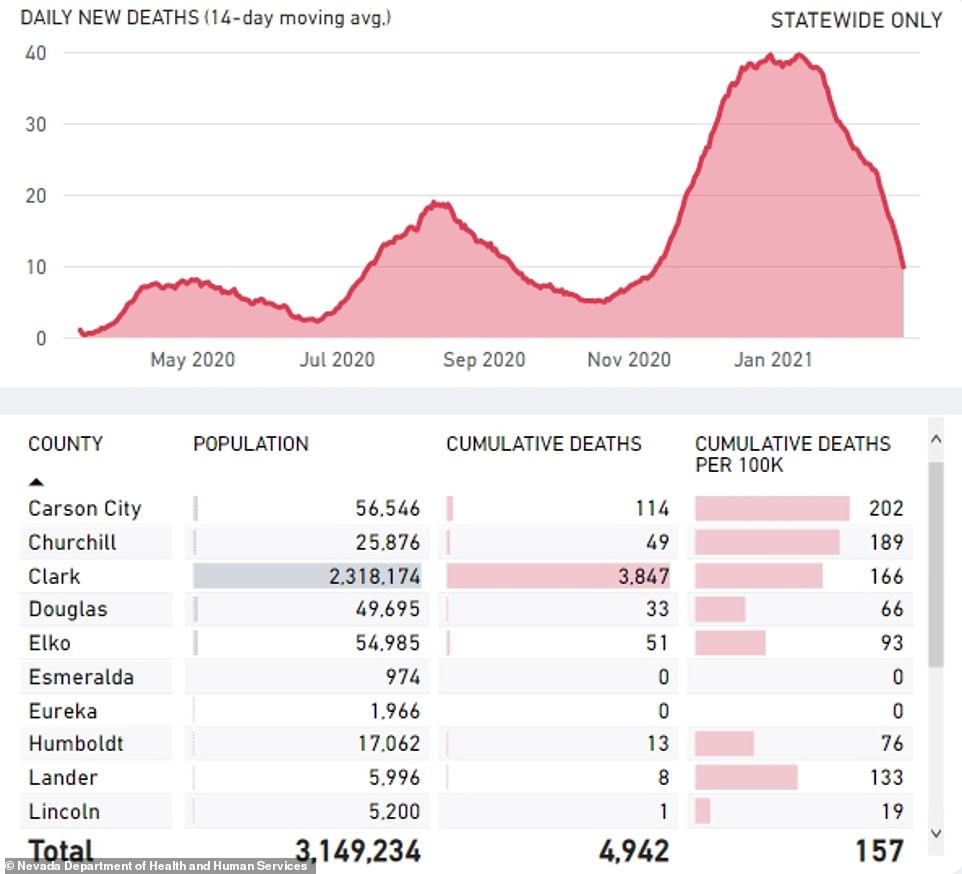 The number of statewide deaths has been on a downward trajectory in recent weeks, according to figures

Lawton called a slump in baccarat play, down 74.3 per cent on the Strip, a significant contributor to statewide results. Other game and table winnings were down 50 per cent compared with January 2020.

Las Vegas resorts rely on air travelers, and McCarran International Airport reported Wednesday that just 1.5 million passengers came and went in January — down nearly 64 per cent from a year ago.

Casinos in Washoe County, including Reno and North Lake Tahoe, and in Elko County reported winnings were up in January compared with a year ago.

‘Several markets in the state, primarily in northern Nevada which rely on locals and in drive-in domestic play, are recording increases,’ Lawton said.

He added that those areas also benefited from a calendar that provided two additional weekend days compared with a year ago.

Lawton noted that sports betting statewide was strong, with casino wagering pools winning $52.4million. That was up 160 per cent from a year ago.

More than half of sports wagers were made on mobile apps, and casinos won $23.1million on $363.5million in bets, he said.

Football wagering benefited from an additional week of NFL games in January 2021 compared with 2020.

The state collected $46.3million in percentage fees based on the January figures, down more than 36 per cent compared with a year ago.

Casino winnings are a key indicator of state fiscal health.

Casino taxes are second to sales taxes as a percentage of Nevada’s annual budget. The state has no personal income tax. 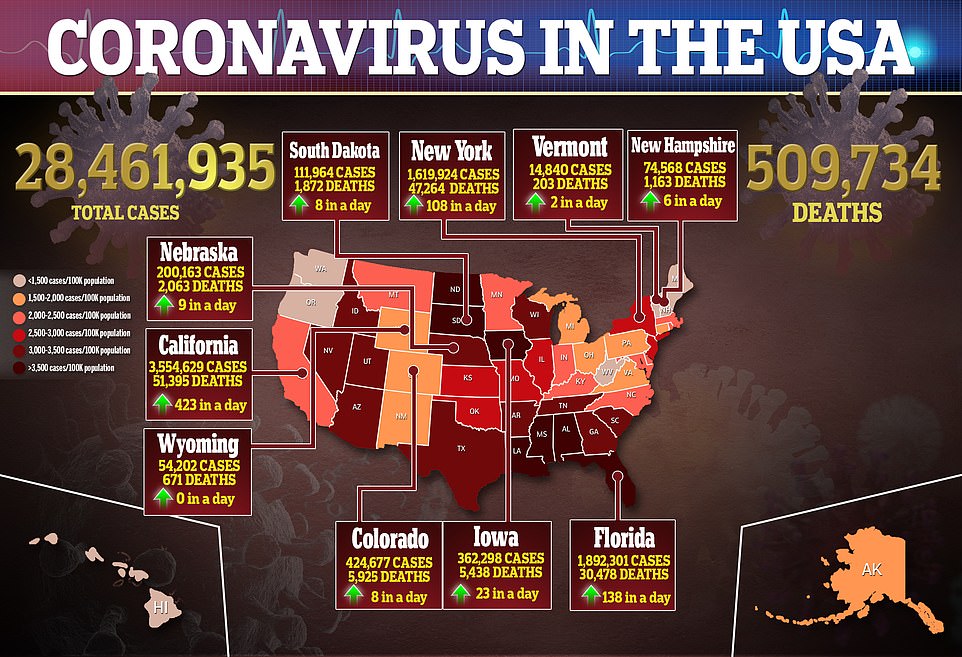 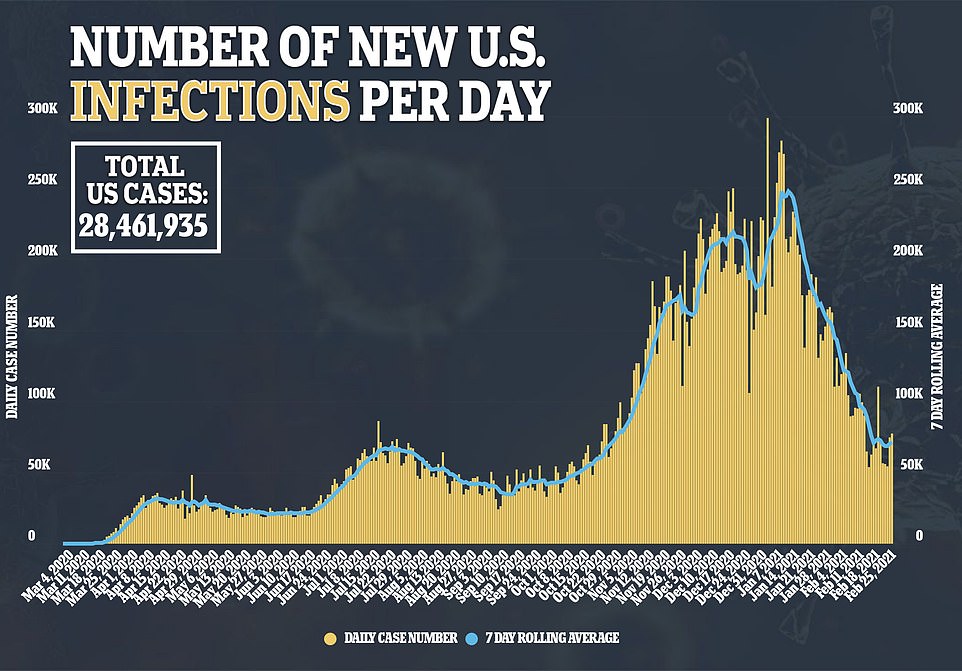 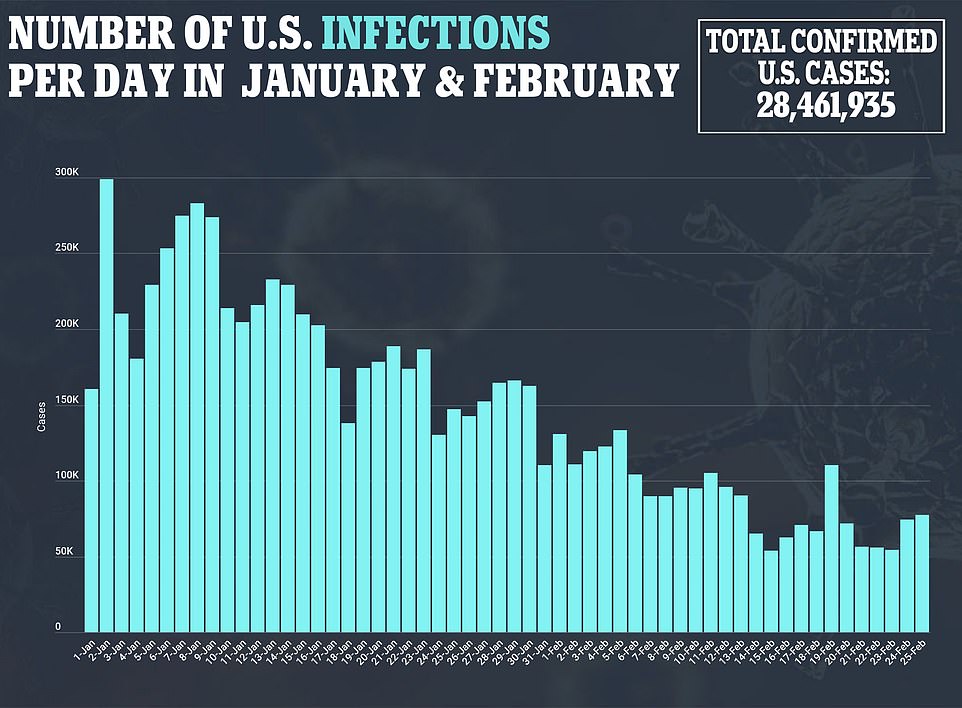 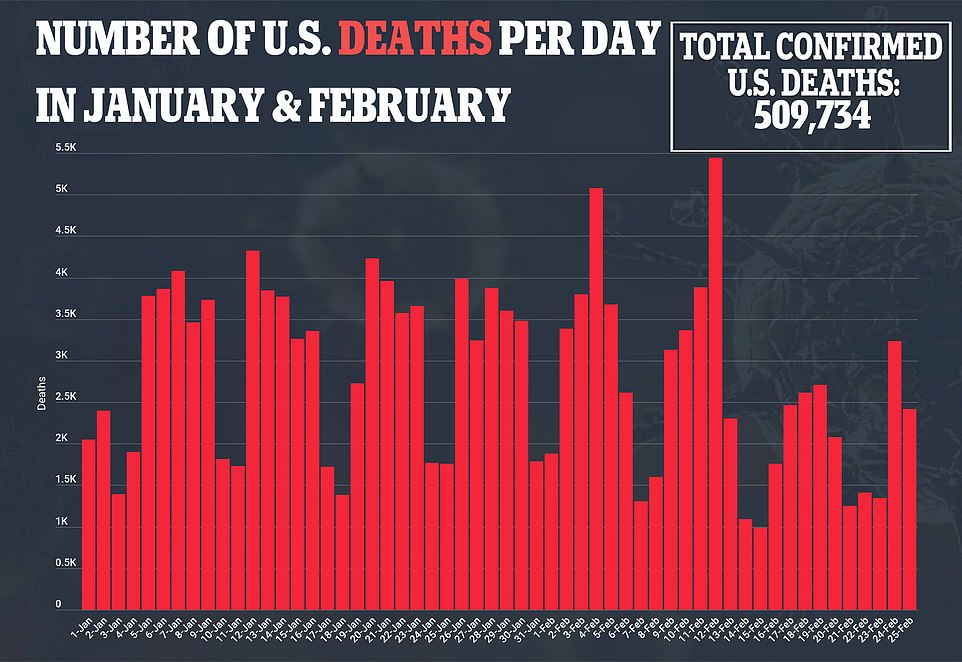 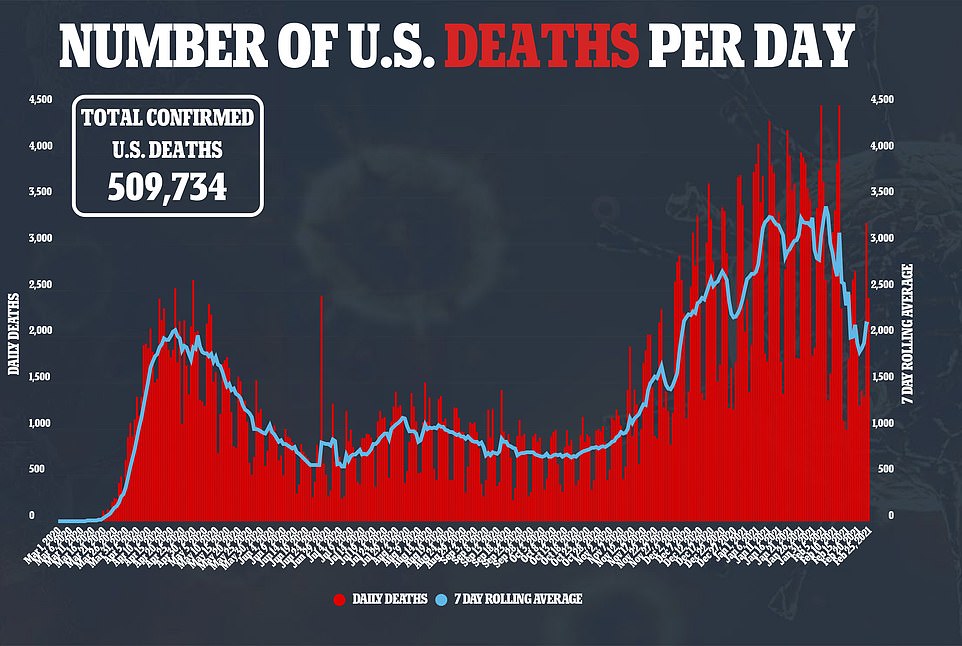 There does appear to be good news on the horizon. State health officials in Nevada reported fewer than 400 new cases of COVID-19 on Friday.

The state’s test positivity rate has also fallen to 8.3 per cent.

As of Friday, there were fewer than 600 COVID-19 patients hospitalized throughout Nevada.

Since the start of the pandemic, 4,942 Nevadans have died of COVID-19. 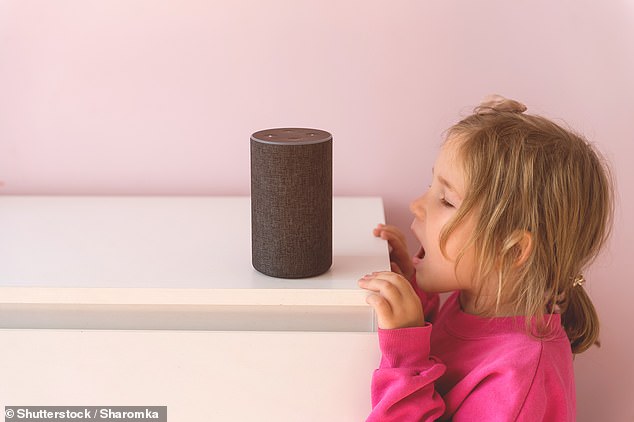 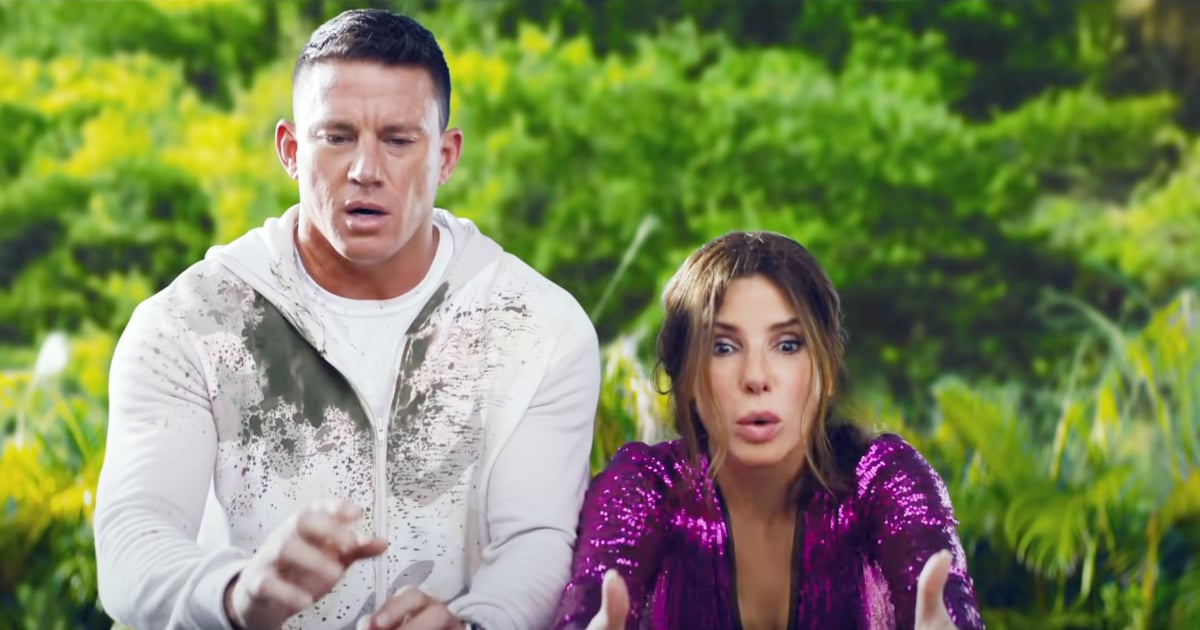 “The Lost City” Will Be Available to Stream — Just Not Yet 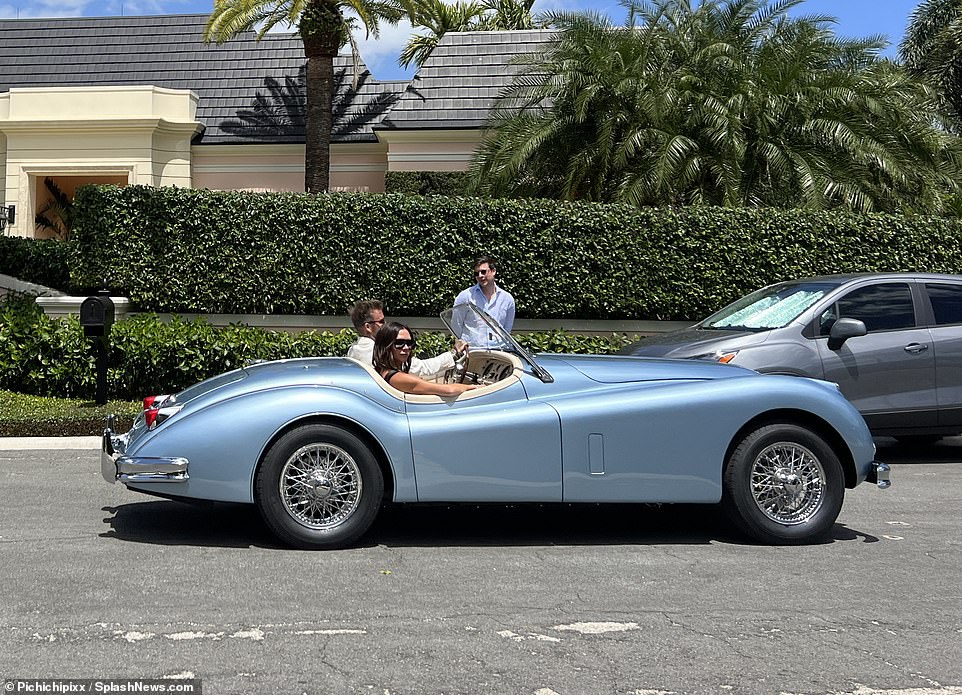 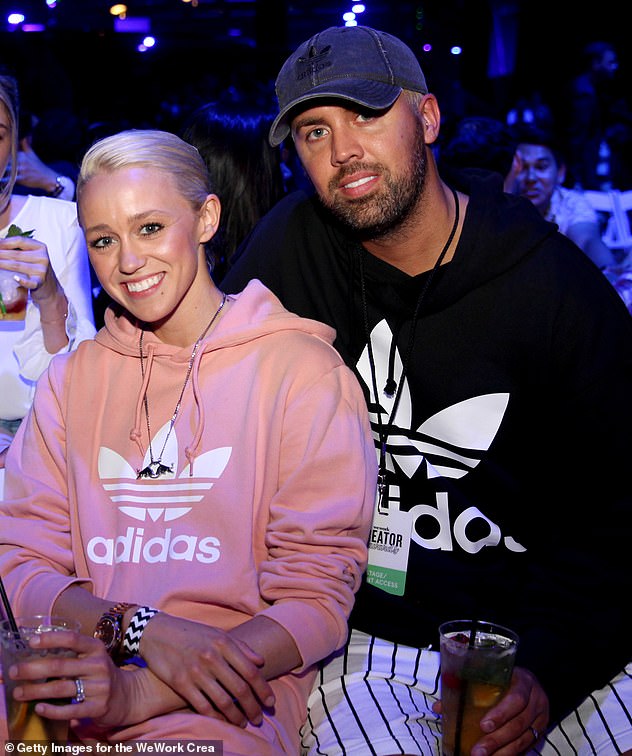