Kate Middleton has received her first dose of Covid vaccine at London’s Science Museum and thanked ‘everyone who is playing a part in the rollout’.

The Duchess of Cambridge wore a blue face covering with a short-sleeved cream top and light blue jeans as a medic jabbed her in the arm at the South Kensington site yesterday.

It came just ten days after her husband Prince William had his first shot from NHS medical staff at the same location.

The 38-year-old posted a picture of himself wearing a mask with his sleeve rolled up and a needle in his arm as he received the jab near where he lives with Kate and their three children.

Kate said today: ‘Yesterday I received my first dose of the Covid-19 vaccine at London‘s Science Museum. I’m hugely grateful to everyone who is playing a part in the rollout – thank you for everything you are doing.’

The post was accompanied by a photograph of the masked duchess wearing the short-sleeved top receiving the injection from a staff member who has not been named.

Prince William said on May 20 he had his vaccine shot on May 18 and followed his father Prince Charles and grandmother the Queen in revealing he had been jabbed.

Kensington Palace has not said which vaccine was given to the royal couple, but they will have been entitled to the Pfizer/BioNTech or Oxford-AstraZeneca jab, because they are under 40.

A message from the 39-year-old on the Kensington Palace Twitter account said: ‘Yesterday I received my first dose of the Covid-19 vaccine at London’s Science Museum’ 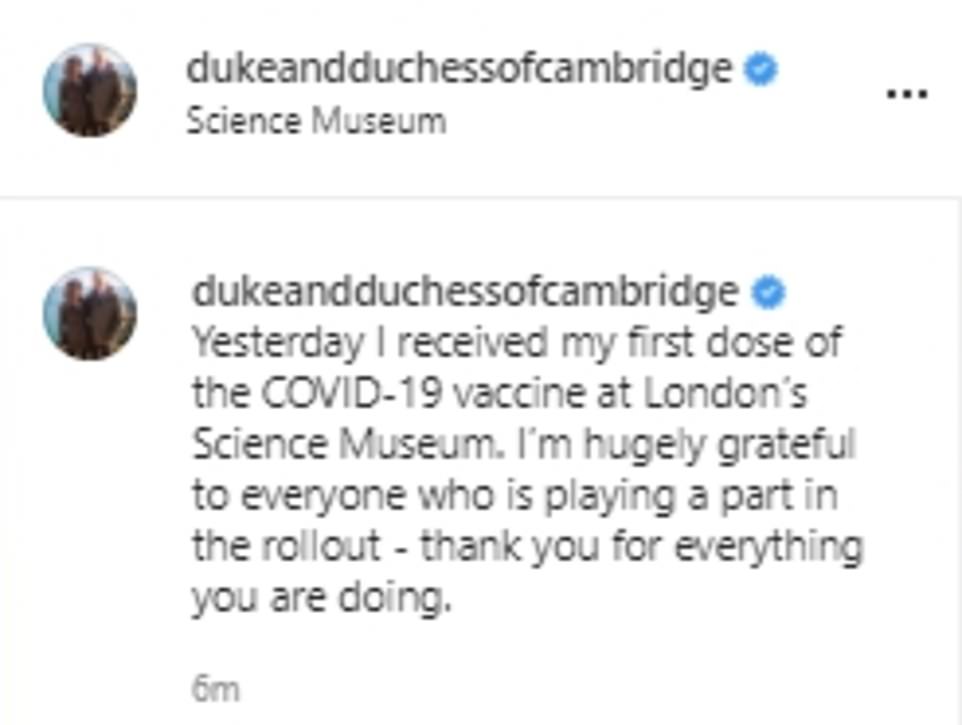 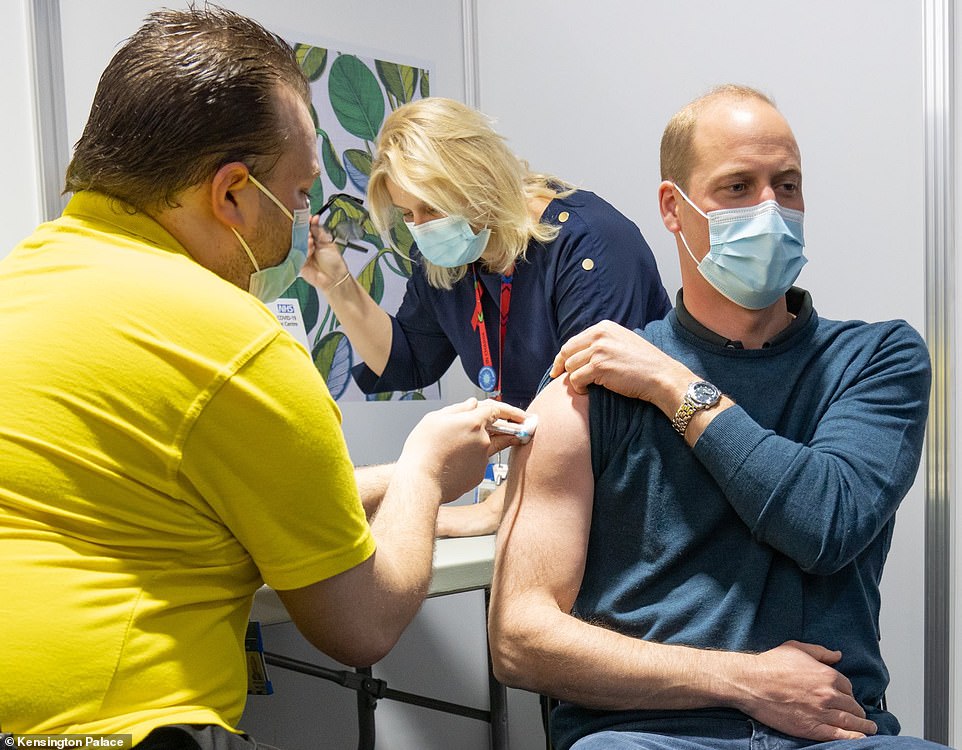 Prince William was struck down by coronavirus in April 2020 and ‘struggled to breathe’ during his battle with the virus. But the public only found out later because the Royal did not want to alarm them.

He is understood to have caught it just days after his father Prince Charles announced he had Covid and shortly after Boris Johnson was struck down by it.

The royal was forced to self isolate at Anmer Hall in Norfolk as he shook off the virus as doctors helped him through it.

Despite fighting the debilitating illness, the Prince still managed to pull off 14 telephone and video call engagements in April.

A source told the Sun: ‘William was hit pretty hard by the virus – it really knocked him for six. At one stage he was struggling to breathe, so obviously everyone around him was pretty panicked.

‘After seeing medics and testing positive – which was obviously quite a shock given how fit and healthy he is – William was determined it should be business as usual though. He was determined to fulfil his engagements.’

William also spoke out against misinformation over the coronavirus and vaccines on social media and online. In February he urged people get jabbed so ‘younger generations’ will feel ‘it’s really important for them to have it’.

Speaking to two clinically vulnerable women, he said: ‘Catherine and I are not medical experts by any means but we can wholeheartedly support having vaccinations.

‘We’ve spoken to a lot of people about it and the uptake has been amazing so far. We’ve got to keep it going so the younger generations also feel that it’s really important for them to have it. Social media is awash with misinformation so we have to be a bit careful who we believe.’

Yesterday William and Kate issued a personalised thank you card dedicated to the people who made their return to Scotland ‘so special’.

The thoughtful note featured a sketch of St Andrews – the university town where the couple met while both studying – which Kate drew in 2002.

It shows a view of the town from West Sands beach, with the Duchess seemingly using a splash of blue watercolour paint to bring out the sky.

The message read: ‘To the people, communities and organisations we visited and heard from; and those who stopped to wave and make our return to Scotland so special – thank you! William and Catherine.’ 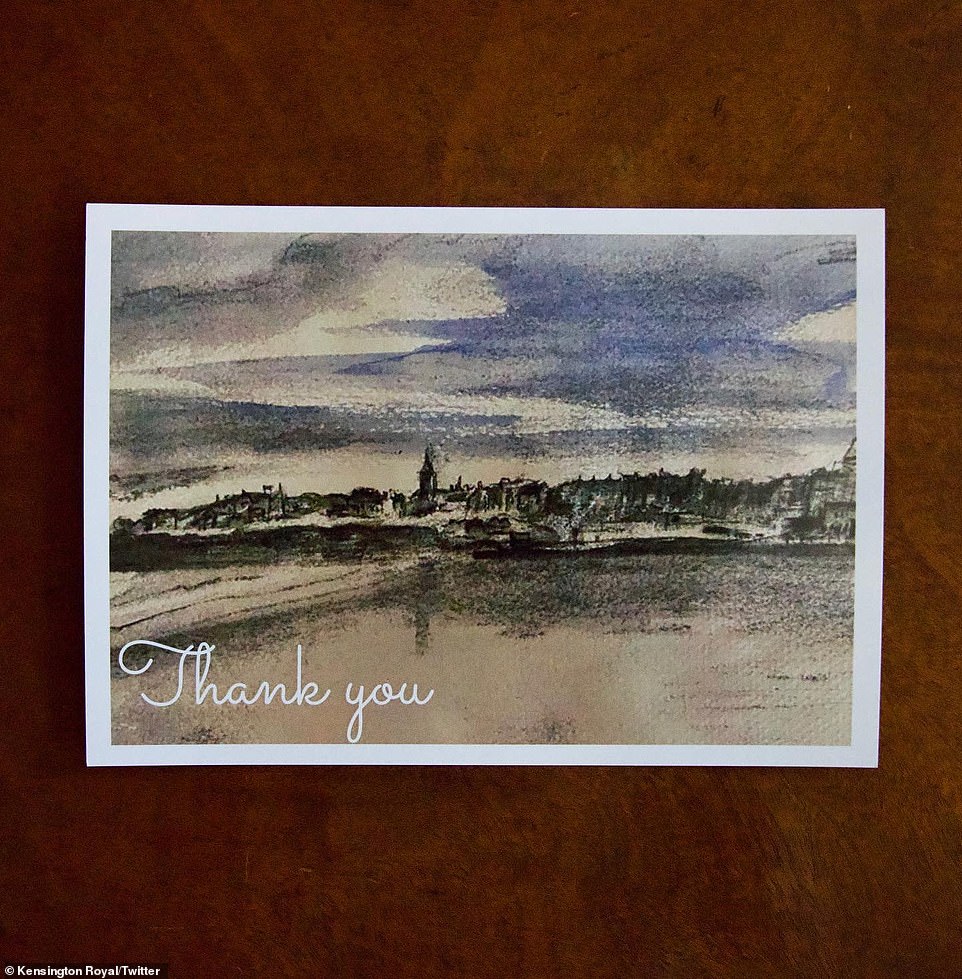 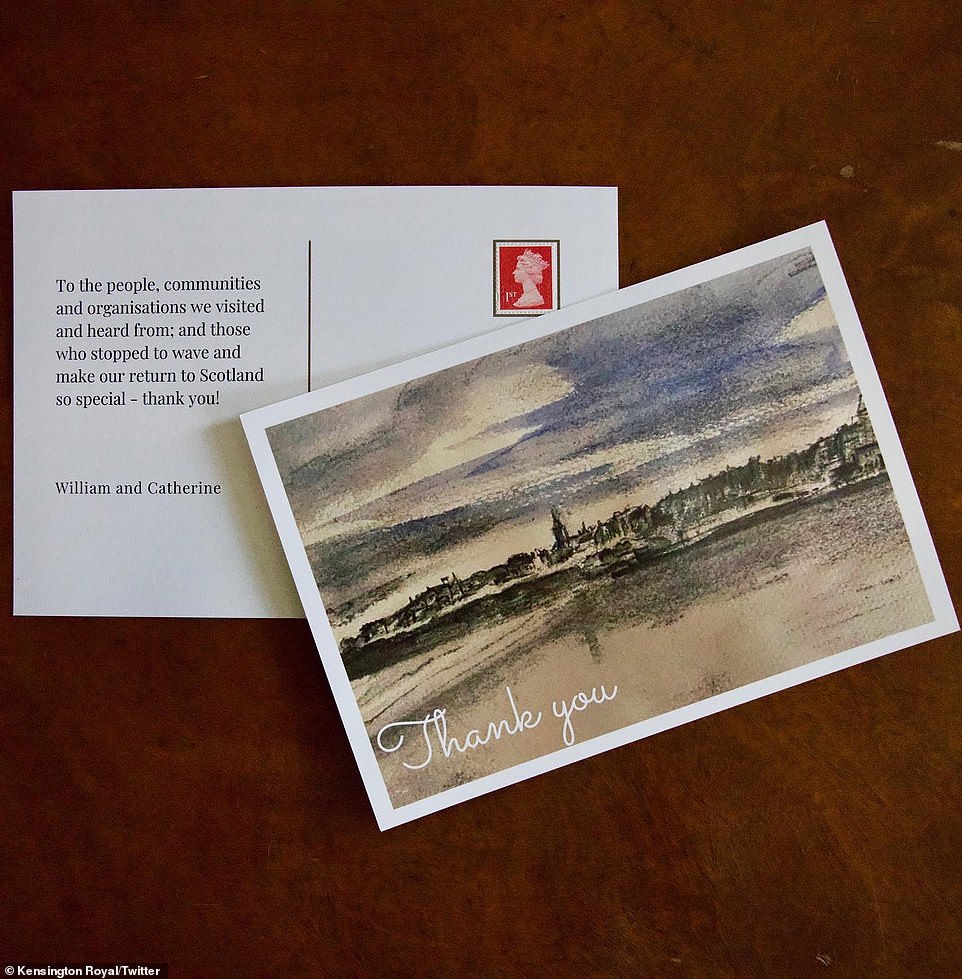 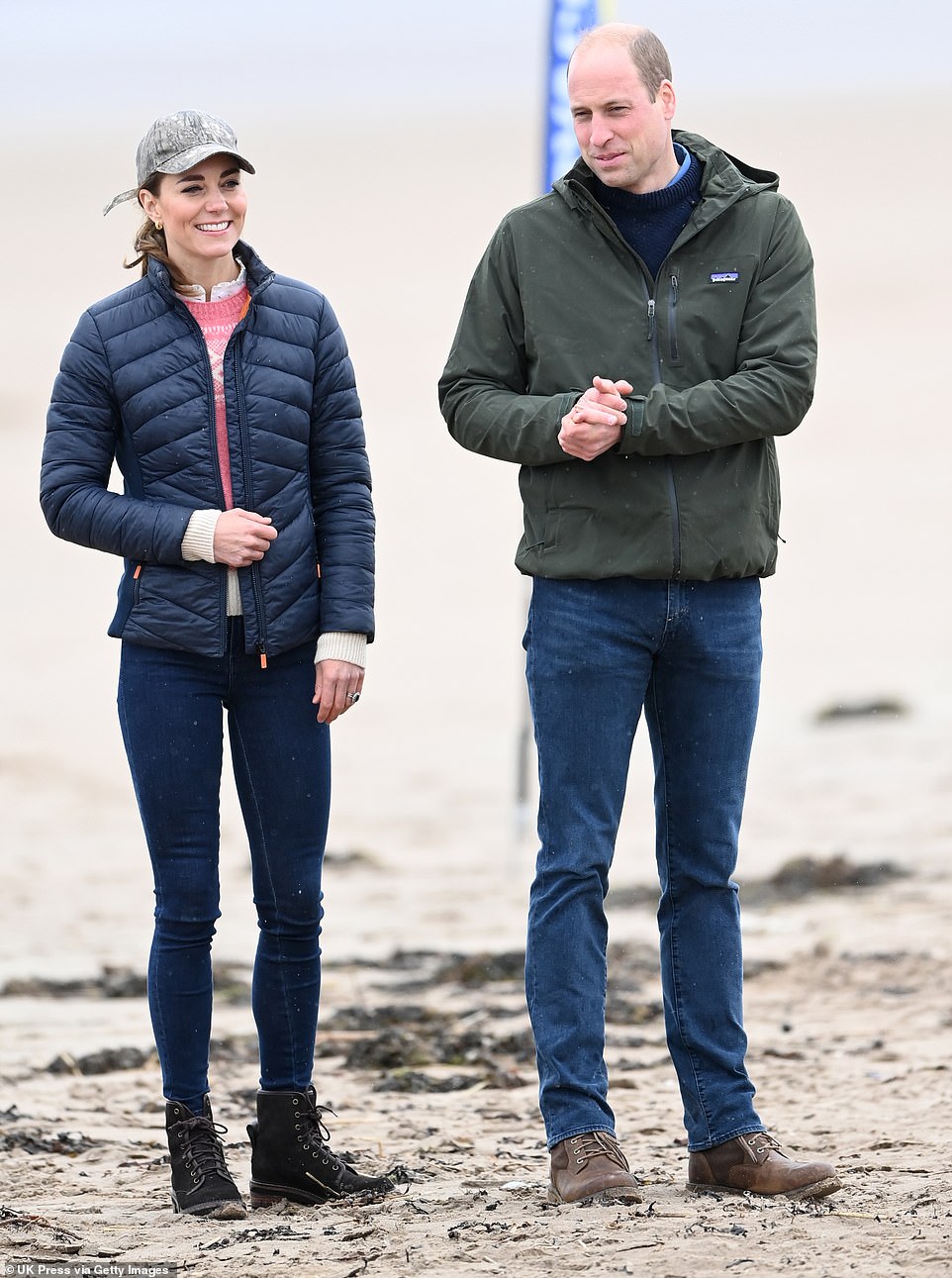 During their week-long tour of Scotland – dubbed a royal charm offensive to help persuade the country to resist the demands of nationalists for independence – the couple enjoyed a trip down memory lane, visiting the town where they fell in love (pictured in St Andrews last week)

Kate studied history of art at St Andrews and graduated in 2005 with an MA, graded at a 2:1. Having started university on the same course as Kate, William later switched to geography.

During their week-long tour of Scotland – dubbed a royal charm offensive to help persuade the country to resist the demands of nationalists for independence – the couple enjoyed a trip down memory lane, visiting the town where they fell in love.

The Cambridges arrived in St Andrews on Tuesday night, the day before their engagements, and enjoyed a private ‘date night’ dinner at Forgan’s restaurant where they were seated in a ‘secluded’ corner table.

After staying locally, rather than at the Queen’s Edinburgh residence of Holyroodhouse, the couple enjoyed a morning of land yacht racing on a St Andrews beach.

Later William and Kate met students and staff at St Andrews to hear about how their lives have been affected by the pandemic, and stopped off at St Salvator’s halls, where they first met.

They then made a short drive to the coastal village of Pittenweem to meet local fishermen and their families, and at the end of a busy day of engagements they stopped off for a takeaway fish supper at their favourite chippy, the award-winning Anstruther Fish Bar, in the coastal town of Anstruther, where they were ‘regular customers’ while students 20 years ago.

During the tour the couple also hosted a drive-in cinema night at the Palace of Holyroodhouse for NHS staff, opened a hospital in Orkney and played tennis with local schoolchildren in Edinburgh.

Kate also made good on a promise to meet five-year-old cancer patient Mila Sneddon, and wore her favourite colour when she welcomed the youngster to Holyroodhouse.

The couple concluded their trip with the Closing Ceremony of the General Assembly of the Church of Scotland, followed by a Beating the Retreat ceremony back at the Palace.

William delivered two emotional speeches in his role as Lord High Commissioner at the General Assembly of the Church of Scotland, stressing his deep connection to the nation and its people.

He emphasised Scotland is ‘so important’ to him and his wife in a very personal address, adding: ‘I am shaped by this place.

‘The abiding affection I feel for it is rooted in my experience of its everyday life – in people, relationships, and its ethic of neighbourliness.’

Meanwhile a business run by Kate’s parents has recorded losses of more than £1million after it was hit by the coronavirus pandemic.

Party Pieces Holdings’ directors, which include the Duchess of Cambridge’s parents Carole and Michael, claimed losses were ‘forecast’ and blamed the shortfall on major restructuring.

The Middletons teamed up with new investors to develop their party business – which they have run since Kate was a young girl.

Despite the coronavirus pandemic, the firm’s directors claim to be ‘wholly optimistic’ about the future of the company. 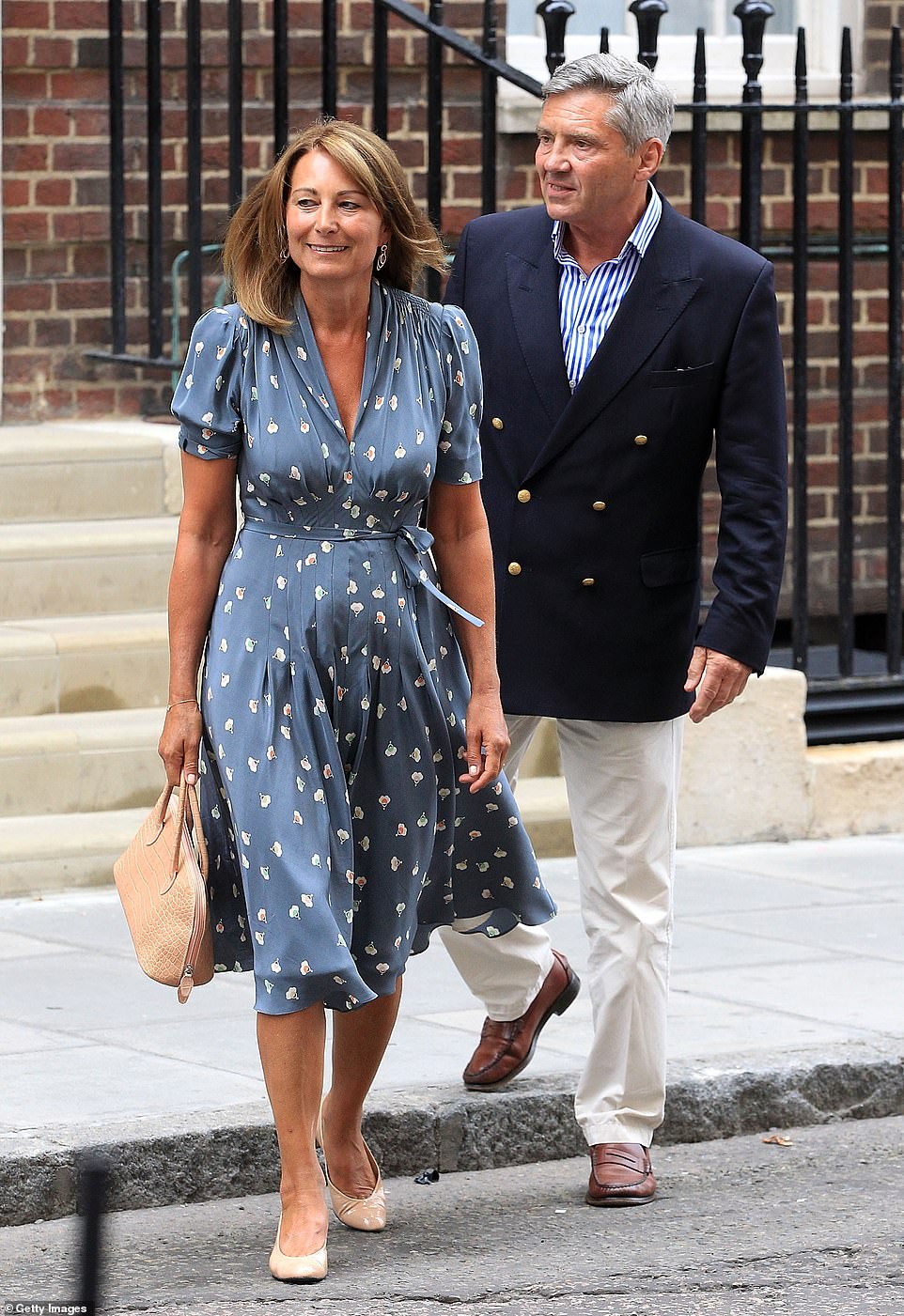 The directors, who include Kate Middleton’s mother and father Carole and Michael (pictured together) said losses were ‘forecast’ and part of a major restructuring of the business 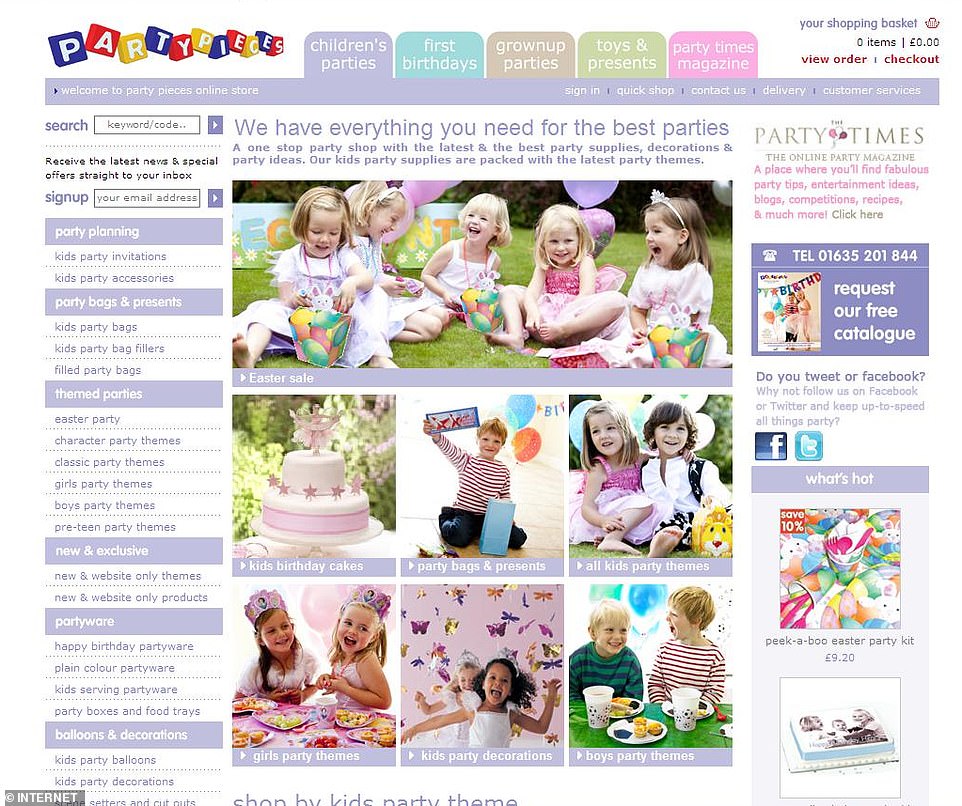 Its accounts read: ‘The company began trading in September 2019 to expand and develop the existing ‘Party Pieces’ brand. Loan capital investments of £1.2million were made by the directors to finance four key areas.’

But a ‘number of challenges’ surfaced during lockdown, it added, when parties and large gatherings were banned to stem the spread of coronavirus.

‘The company faced a number of challenges during the pandemic and the associated lockdowns in respect of product availability and logistical problems, however was able to trade throughout,’ it said.

The accounts revealed the party company has not been negatively impacted by Britain leaving the European Union.

It said: ‘During the year the company was preparing for the end of the transition period and UK’s exit from the single market.

‘The trade deal that has been agreed has brought new processes in the import and export of goods, however the company has felt no significant impact.’

The first four product ranges in the Party Pieces own-brand collection will be launched this summer, it revealed.

‘The first four product ranges with over 50 lines are being launched in the summer of 2021 with 2 new ranges to follow in the autumn. It remains a priority of the business to introduce new ranges continually.

‘The losses in the year were forecasted and present the foundations that have been put down to trade successfully into 2021.

‘The directors are wholly optimistic with the future forecast for the business to remain on plan in the year ahead.’

Party Pieces Holdings employed 21 people during the period of the accounts September 5, 2019 to the end of December 2020. 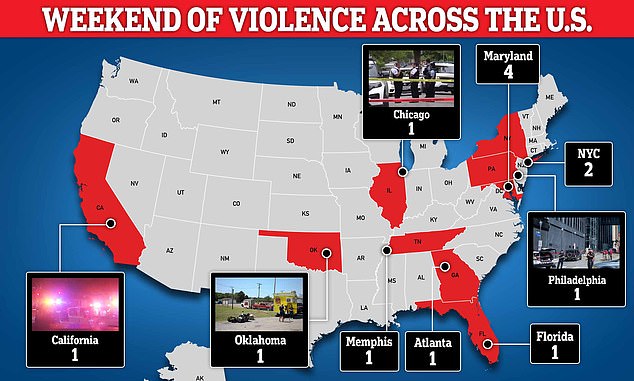 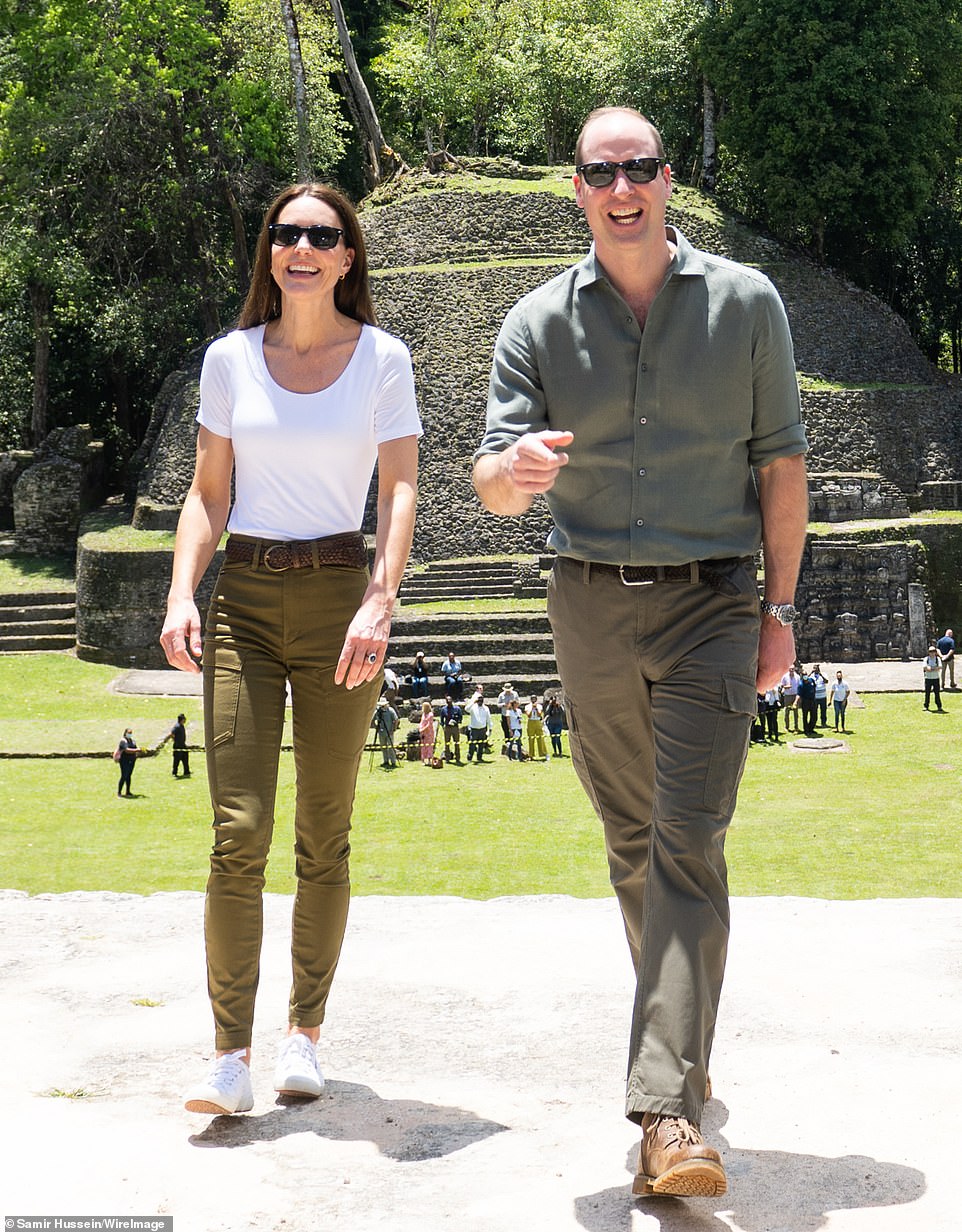 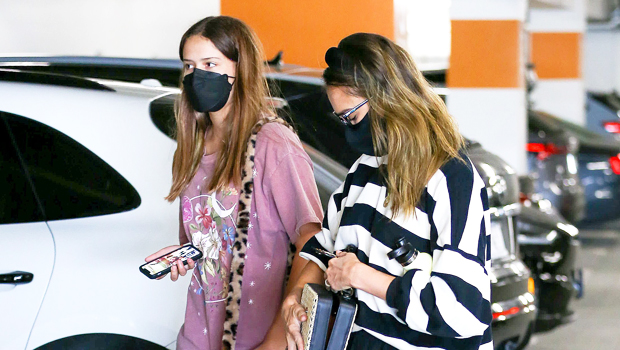 Jessica Alba’s Lookalike Daughter Honor, 12, Towers Over Her While Shopping In LA — Pics 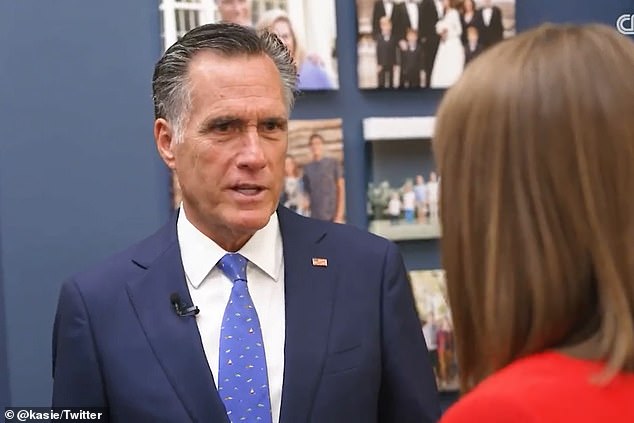