He was the death-wish killer who pleaded to be allowed to face a firing squad – and his final words before he was shot inspired one of the world’s best-known marketing slogans.

Gary Gilmore was executed in Utah state prison on this day in 1977 after being sentenced to death in October 1976 for the murder of a motel clerk.

Unlike most death row inmates, Gilmore had famously demanded to be killed as soon as possible. In the seconds before he got his wish, his final words were: ‘Let’s do it’.

In 2015, advertising executive Dan Wieden said that Gilmore’s words had inspired him to dream up sportswear giant Nike’s famous ‘Just Do It’ slogan.

He recalled how, in 1988 just before a crunch marketing campaign meeting with Nike bosses, he decided to suggest a slightly altered version of Gilmore’s words as the firm’s tag line.

Just Do It, which is still Nike’s slogan, was first used in adverts that same year and has since been described as one of the best taglines of the 20th century.

Gilmore’s case was also notable because the death penalty had been controversially reinstated in the US in 1976 and the 36-year-old became the first to be executed under the new law.

His final words were also printed on T-shirts, whilst his corneas – which were donated within hours of his death – inspired the hit song ‘Gary Gilmore’s Eyes’.

Gilmore had spent much of his early life in prison after getting into trouble with the law following the death of his father.

In 1964, he was given a 15-year sentence as a repeat offender after facing assault and armed robbery charges.

On July 19, 1976, after being paroled in April that year, the killer robbed and murdered gas station employee Max Jensen, in Orem, Utah.

The next evening, he murdered motel manager Bennie Bushnell. He forced Bushnell to lie down before shooting him through head.

Gilmore committed his heinous crimes even though both men had complied with his demands.

Whilst the first killing never went to trial, in October 1976 Gilmore was sentenced to death for the second murder.

Gilmore’s fate became part of a political tug of war because the four-year legal moratorium on the death penalty in the US had come to an end that same year.

His killing was the first execution in the US in nearly ten years.

The last man to be executed before Gilmore in the US was Luis Jose Monge, who died in a gas chamber in Colorado in June 1967. 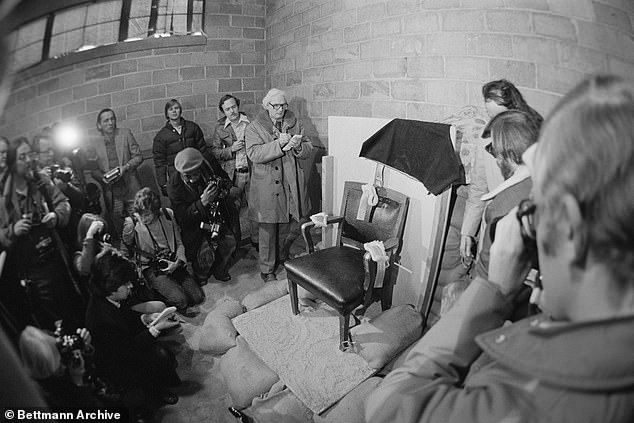 Unlike most death row inmates, Gilmore had famously demanded to be killed as soon as possible. In the seconds before he got his wish, his final words were: ‘Let’s do it’. Above: The room where Gilmore was executed is seen being examined by the world’s media 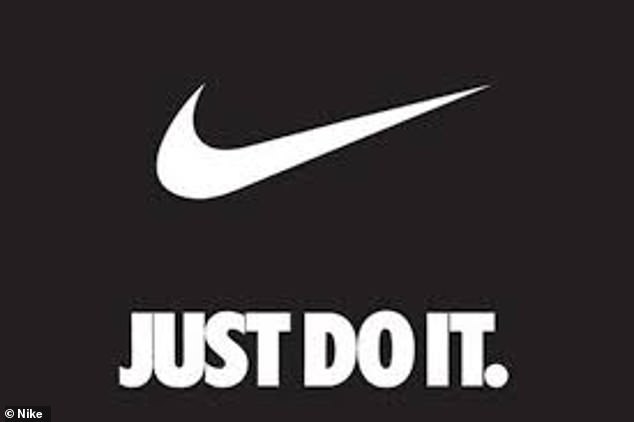 In 2015, advertising executive Dan Wieden said that Gilmore’s words had inspired him to dream up sportswear giant Nike’s famous ‘Just Do It’ slogan

Gilmore’s own mother, Bessie, had called on Utah’s Supreme Court to defer her son’s execution, as had lawyers from the American Civil Liberties Union.

Ultimately, the execution was delayed three times before a final date of January 17 was set.

Gilmore twice attempted to take his own life while awaiting the implementation of his sentence.

On the first occasion, he and the woman he had wanted to marry, Nicole Barrett, took drugs overdoses at the same time – he in his prison cell and she in her flat.

Miss Barrett had also called on the authorities to give her boyfriend his expressed wish of dying ‘like a man’ without a blindfold.

The normal practice for executions in the state was for the condemned to be strapped to an oak chair with a hood over their face.

The second suicide attempt, in mid-December after had finally set his execution date to January 17, saw Gilmore again take a drug overdose.

Just a day earlier, he had called Robert Bullock a ‘moral coward’ after he had set the execution date instead of having him killed immediately. 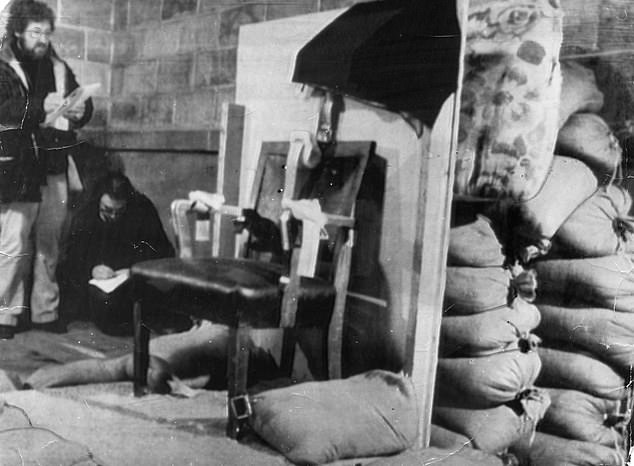 Gilmore’s case was also notable because the death penalty had been controversially reinstated in the US in 1976 and the 36-year-old became the first to be executed under the new law. Above: The chair in which Gilmore sat

Gilmore, who had also been on a 25-day hunger strike to try to force through the execution, said: ‘It’s unnecessary, it’s needless and unwanted.

‘Man, you just don’t have the guts to carry out your law. You’re a moral coward.’

The final date for Gilmore’s execution was enforced when the US Supreme Court refused to intervene to have it stopped once more.

Even as he was about to be killed, lawyers from the ACLU had scrambled to try to get yet another stay of execution agreed.

The firing squad of five was made up of five volunteers who used Winchester rifles. Four were paid £60, whilst the captain who shouted ‘fire!’ was given an extra £15.

The executioners stood concealed behind a curtain with five small holes, through which they aimed their files.

When asked what his final words were, Gilmore replied with words that became iconic.

Hollywood executives had vied to tell Gilmore’s story on-screen and the rights to the production were bought from Gilmore for £75,000 by agent Lawrence Schiller.

Schiller was one of the witnesses to his execution, which took place at dawn.

Afterwards, he sold a 20,000-word interview with Gilmore to Playboy magazine.

When it emerged that movie legends Steve McQueen or Paul Newman could portray him, he said he did not want them to take on the role because ‘the audience watch them – not eh character’. 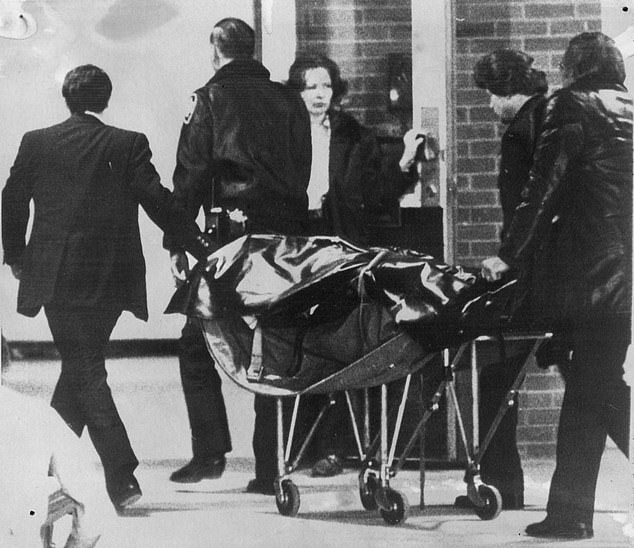 Hollywood executives had vied to tell Gilmore’s story on-screen and the rights to the production were bought from Gilmore for £75,000 by agent Lawrence Schiller. Above: Schiller’s body is wheeled away after his killing

For his last meal, Gilmore had initially asked for six cans of beer but changed his request at the last minute to prime rib and salad.

Asked if he would have had his execution televised if he had had the choice, Gilmore had said in an interview before his death: ‘No. Too morbid. Too macabre. But at the same time I really don’t care. I guess I’m more or less indifferent.’

As well as his corneas, Gilmore also offered his bones, nerves and skin for donation, whilst his kidneys were offered up for research.

American writer Normal Mailer wrote a novel based on Gilmore’s life, titled The Executioner’s Song. It went on to win the Pulitzer Prize.

The saga was also turned into a TV film of the same name in 1982.

Speaking in 2015, advertising executive Mr Wieden, the co-founder of advertising agency Wieden+Kennedy, detailed how he recalled Gilmore’s final words just before his meeting with Nike executives.

Speaking to Dezeen magazine, he described how he was worried that an upcoming series of five TV adverts lacked cohesion, because they all had a different feel to them. He felt they needed a tagline to tie them all together

His company had been parachuted in by Nike to help them counter-attack rivals Reebok, who had just announced bigger profits. 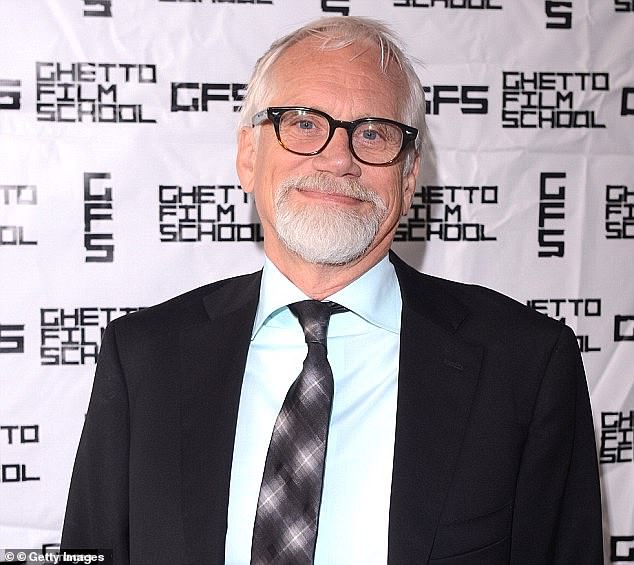 Mr Wieden said: ‘We… came up with five different 30 second spots. The night before [a meeting with Nike] I got concerned because… there wasn’t an overlying sensibility to them all. Some were funny, some were solemn. So I thought… we need a tagline to pull this stuff together.

‘I wrote about four or five ideas. I narrowed it down to the last one, which was ‘Just do it’.

He said the reason he chose the slogan was because he had recalled Gilmore’s final words.

He added: ‘for some reason I went: ‘Now damn. How do you ask for an ultimate challenge that you are probably going to lose, but you call it in?’

At first, he recalled, Nike hated the idea, but he won them round and the slogan appeared at the end of an advert featuring 80-year-old runner Walt Stack.

It is now one of the most famous slogans in the world, described by Campaign magazine as ‘arguably the best tagline of the 20th century’.

Holocaust survivor, 98, celebrates becoming a great-grandmother for the 35th time 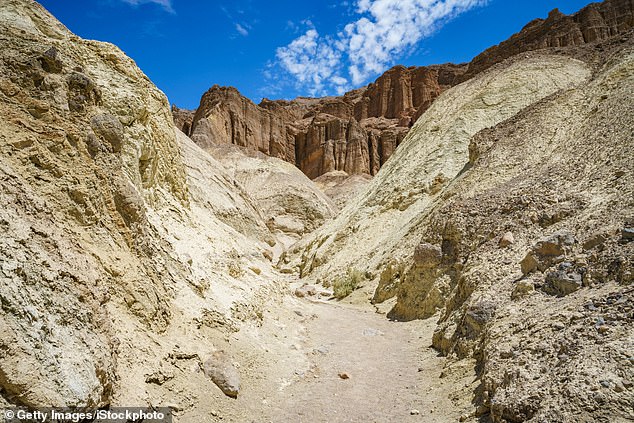 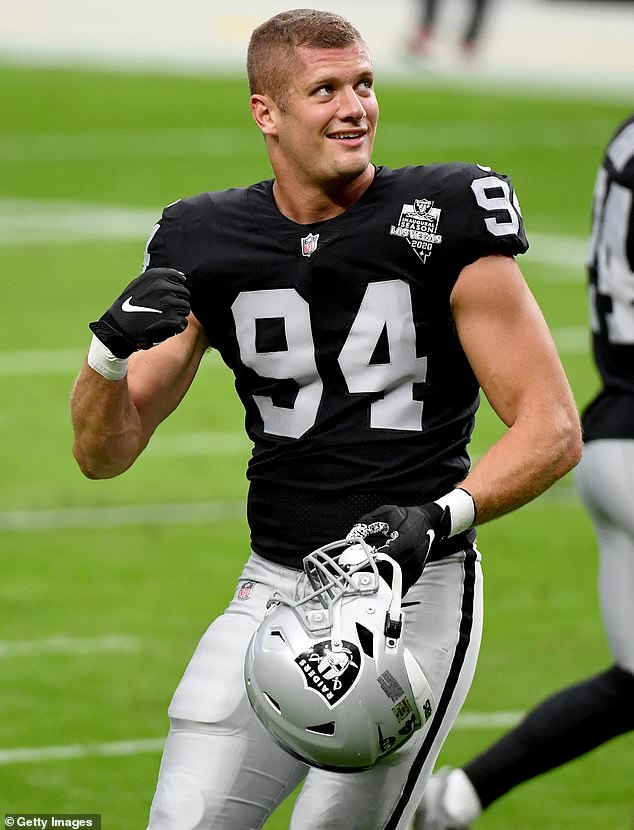 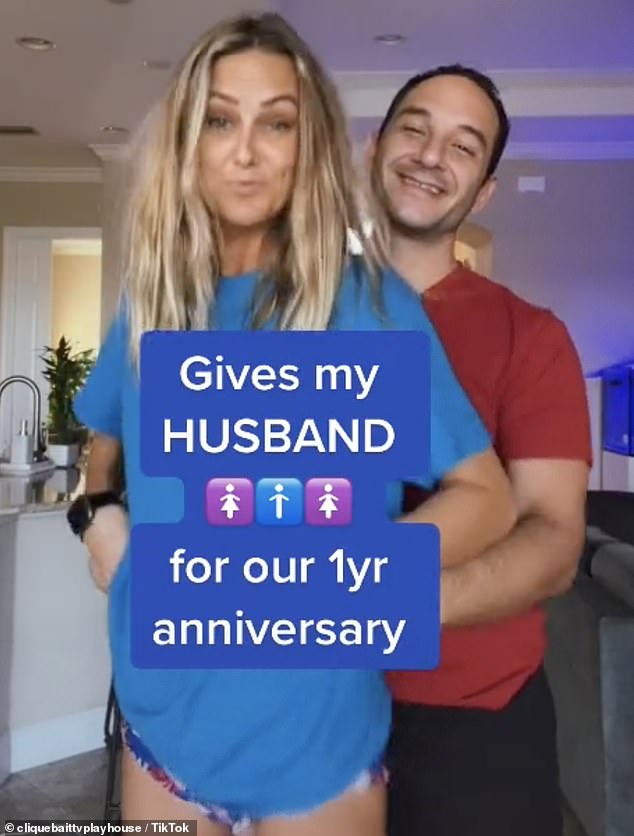 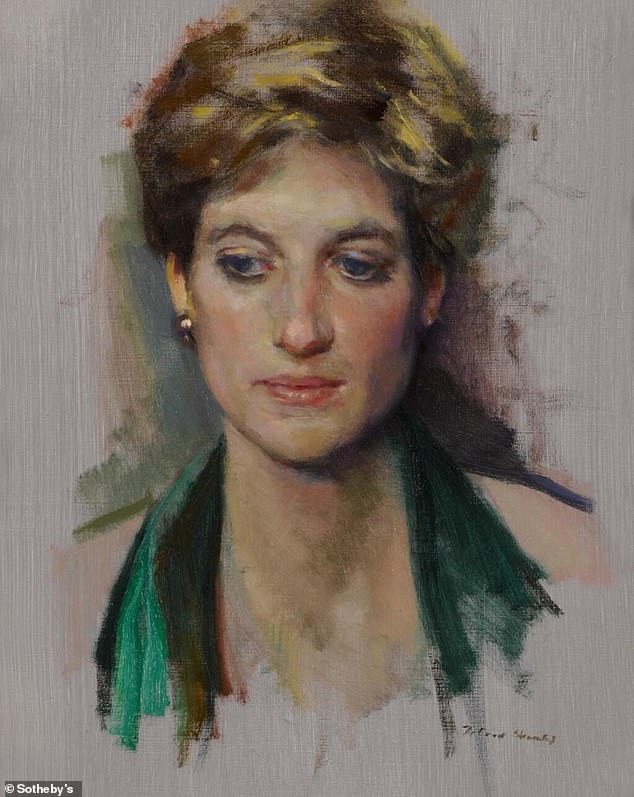