President Joe Biden and Vice President Kamala Harris paid a joint visit to the headquarters of the Centers for Disease Control and Prevention Friday during their trip to Atlanta.

The president profusely thanked the workers, telling them ‘And you are the Army, you’re the Navy, you’re the Marines, you’re the Coast Guard. I really mean it.’

‘This is war and you are the frontline troops,’ he said. ‘Sounds silly. But think about it.’

Biden’s visit came on the day that his administration hit getting 100 million COVID-19 vaccine shots in arms, a goal he set for his first 100 days in office. The U.S. got to the goal on day No. 58.

‘Remember when I said my goal was going to have 100 million shots in people’s arms in the first 100 days as president and everybody said …”Oh, yeah, right,”‘ he told the CDC workers. ‘Now it’s … “Why didn’t they say more?”‘

President Joe Biden (left) and Vice President Kamala Harris (right) visited the Centers for Disease Control and Prevention in Atlanta, Georgia on Friday. Biden said he was there to thank the workforce for what they’ve done during the COVID-19 pandemic 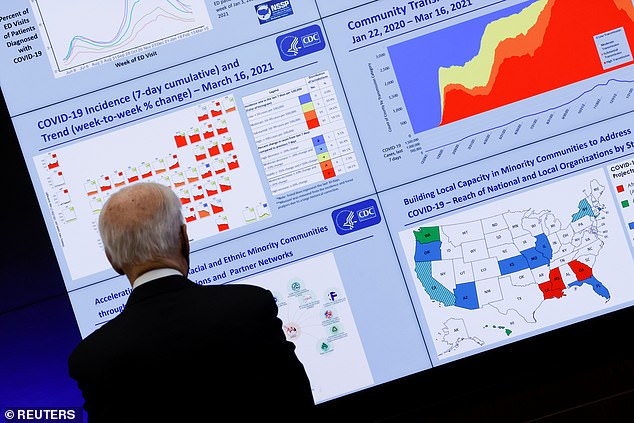 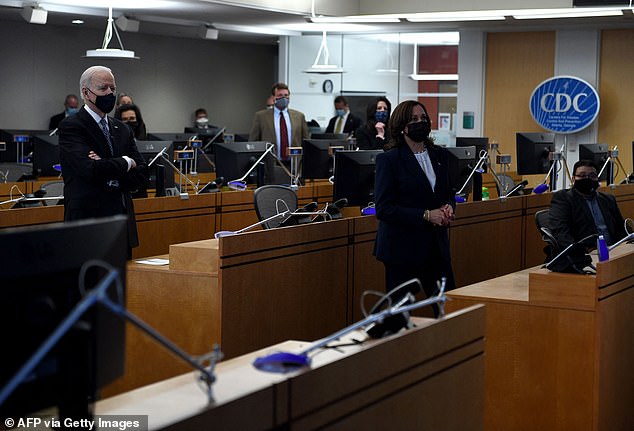 President Joe Biden (left) and Vice President Kamala Harris (right) take in a COVID-19 briefing at the headquarters of the Centers for Disease Control and Prevention in Atlanta, Georgia on Friday

The pre-planned trip to Atlanta – which was to tout the just-passed COVID-19 relief bill – changed in tone after Tuesday’s shooting in the city, as a 21-year-old white man gunned down eight people, including six Asian women.

After the CDC visit, Biden and Harris were slated to meet with leaders of the Asian-American community, as well as the city’s mayor and several other prominent Georgia Democrats.

The president started the day by tripping and falling on the steps of Air Force One, as he boarded the plane at Joint Base Andrews.

By the afternoon visit to the CDC, he was chipper, joking to workers about how just one person clapped when he walked in.

‘Why did only one person clap?’ he asked, when the doctors assembled – including CDC head Rochelle Walensky – asked if he or Harris had questions.

‘Why are ya’ll standing?’ he also kidded, as the CDC staff had rose to greet the president.

He told them that the country owed the workforce ‘a gigantic debt of gratitude.’

Science, Biden said, would do that.

Previously, the president argued, ‘science was viewed as an appendage.’

He then argued that there was bipartisan consensus for his COVID-19 relief package, despite it earning zero Republican votes in the House and Senate.

‘This is a bipartisan effort now,’ he said. ‘It isn’t showing itself in the way senators and congressmen vote, but the public, but the public, we are talking about it on the airplane,’ motioning to Harris.

She flew Air Force Two down to Atlanta separately, but the two leaders briefly met on Air Force One while it was parked on the tarmac before heading to the CDC, the first stop of the day.

‘And we’re not going back to the old days,’ Biden continued. ‘Even if tomorrow the whole administration changed, I think – you’ve changed things .. you’ve changed them in a way that is going to make everybody healthier in this country and when we have a crisis, you’re prepared to meet it because you speak truth and science to power. And that is the power.’

'Me so vaccinated!' CNN pundit Ana Navarro is slammed for posting 'anti-Asian' tweet 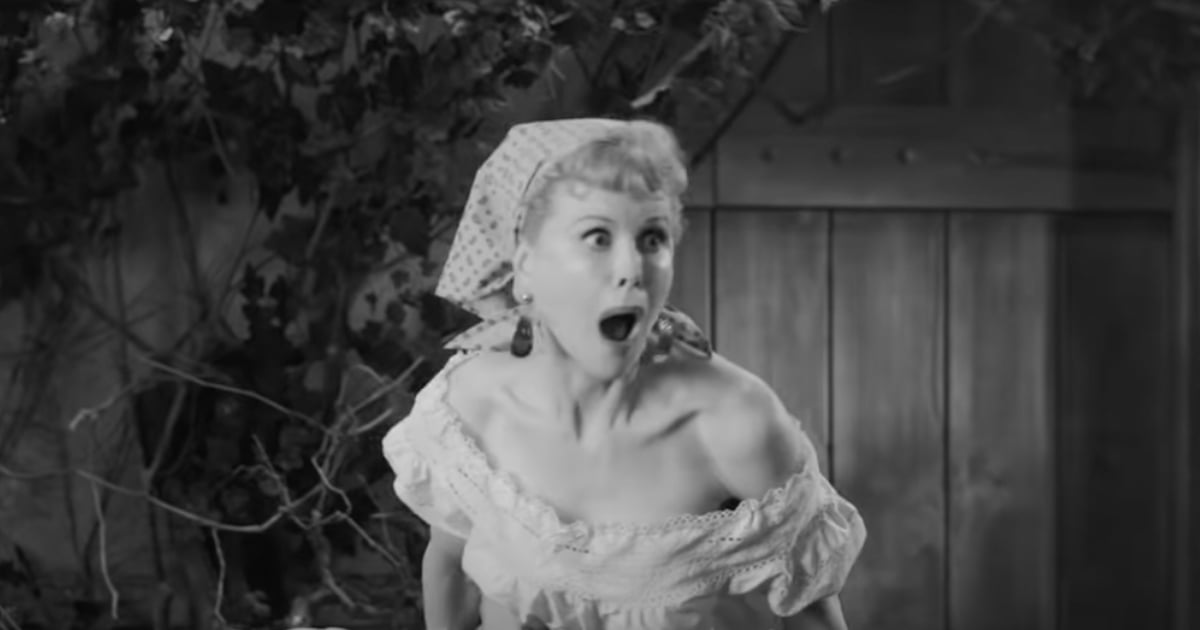 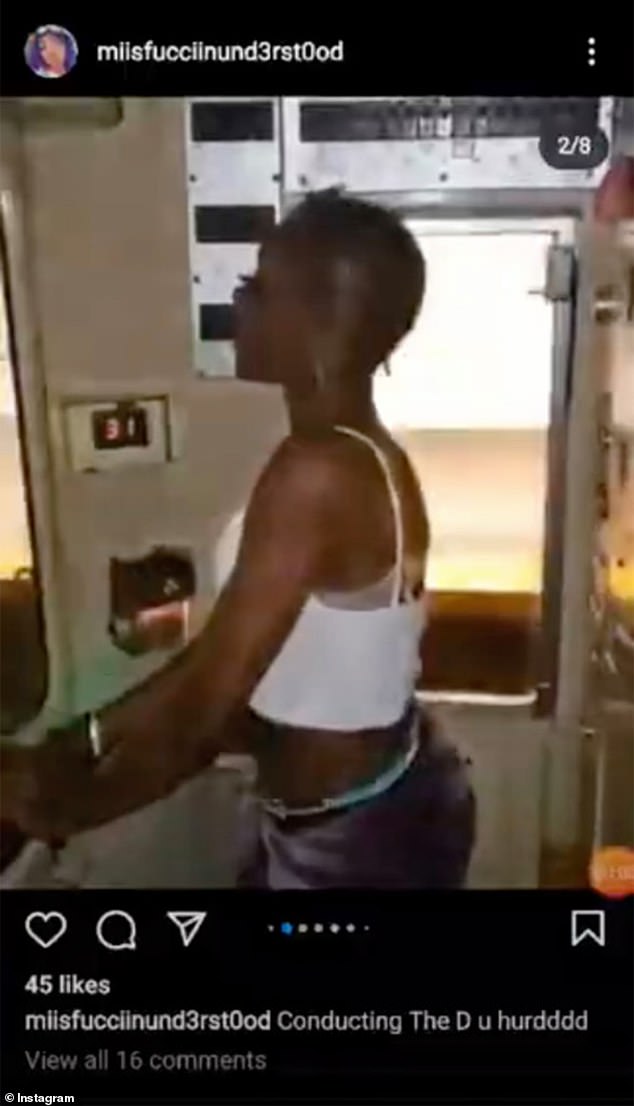 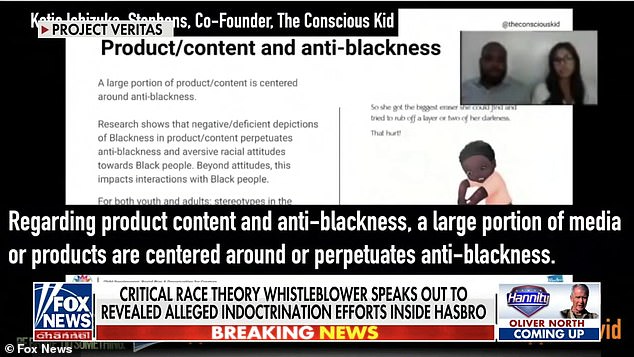 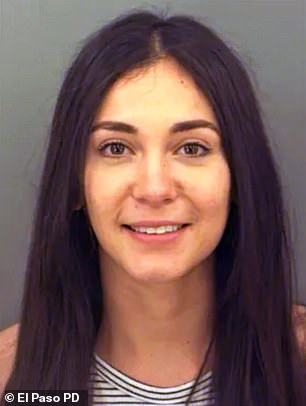