Joe Biden‘s national security adviser warned the Taliban on Sunday that the U.S. will issue a ‘forceful’ response if they interfere in American evacuation efforts from Afghanistan – and he doesn’t rule out sending in more troops.

‘If in the end Americans are blocked from getting to the airport, blocked from leaving the country, or our operations are disrupted or our evacuations are in some way interfered with, we have explained to them that there will be a swift and forceful response,’ Jake Sullivan told NBC News host Chuck Todd during an interview on Meet the Press.

Sullivan detailed that Washington has an agreement with the Taliban that they will allow all American citizens passage to the Kabul airport – including through any checkpoints along their travel to the Hamid Karzai International Airport.

He admitted Sunday that the airport is dangerous and faces ‘threats from ISIS.’

‘I know that the scenes around the airport are heartbreaking, large crowds of people wanting to leave,’ Sullivan said. ‘I know that there is complexity and there is turbulence on the ground and in Kabul, and it’s very risky and dangerous because there’s a genuine threat from ISIS-K. That is the reality of what we are up against, and I’m not going to sugarcoat that reality.’ 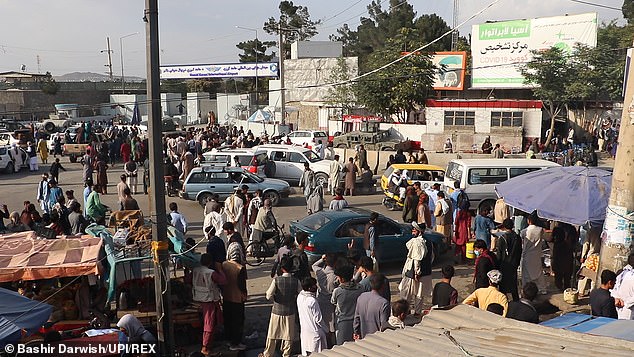 The Taliban has an agreement with Washington to let Americans through checkpoints to the airport. Taliban fighters stand guard as Afghans gather to try and get into Hamid Karzai International Airport to evacuate the country on Saturday

This comment runs counter to Biden’s messaging on Friday that Americans are not being blocked from getting to the airport.

‘We have no indication that they haven’t been able to get, in Kabul, through the airport,’ Biden said in his first press conference since the bundled withdrawal from Afghanistan.

He cited the agreement Sullivan was referencing where the Taliban have vowed to let people with an American passport through checkpoints. Many critics have questioned why the administration would take the word of the militant group.

‘We know of no circumstance where American citizens, carrying an American passport, are trying to get through to the airport [and can’t],’ Biden continued in his press conference. ‘But we will do whatever needs to be done to see to it they get there.’

The president will give on Sunday afternoon an update to the nation on the evacuation efforts of Americans and allies from Afghanistan.

Republican Representative Liz Cheney pushed back against these comments on Sunday, claiming the administration is ‘denying’ the facts of what’s actually happening in the Middle East.

‘The White House is denying what we know is happening on the ground: That Americans are being beaten, they’re being prevented from getting to the airport and they’re probably being held hostage,’ Cheney told Meet the Press.

Defense Secretary Lloyd Austin said over the weekend that Americans are being beaten by the Taliban as they try to reach the airport in Kabul. 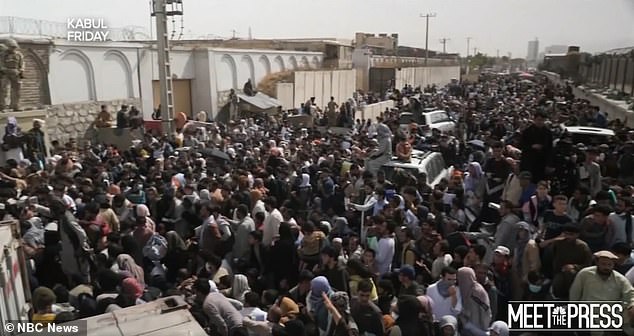 The scene outside the airport has become increasingly chaotic as Americans, allies and Afghans all attempt to flee the country after the Taliban takeover last week

Americans still stranded in the country are receiving some mixed signals from Washington, with some advice not to try to get to the airport and to instead shelter in place, but public reassurances that it’s safe to try and gain passage because the Taliban will let them through.

Sullivan said Sunday morning that there are no current plans to deploy more troops to the region, but wouldn’t rule out the future potential of sending in more.

‘At the moment, we believe we have sufficient forces on the ground,’ Sullivan told Todd.

‘But every single day the president asks his military commanders, including those at the airport and those at the Pentagon, whether they need additional resources, additional troops,’ he continued. ‘So far, the answer has been ‘no,’ but he will ask again today.’

Later Sunday morning, Biden will meet with his national security team to hear intelligence and diplomatic updates on the evolving situation in Afghanistan.

So far, Biden has sent in 6,000 U.S. troops to Afghanistan to help with evacuation efforts after the Taliban was able to take over the country in just over a week. This means the U.S. has deployed more American troops into Afghanistan than the number of U.S. citizens it has extracted from the country since the Taliban swept into power on August 14.

Top military brass and Pentagon leaders, however, have not said when pressed on the matter whether evacuation efforts will continue past August 31.

The Pentagon announced Sunday its activating the Civil Reserve Air Fleet (CRAF), which taps commercial airlines to loan out planes to help with rescue efforts.

Eighteen planes fro six airlines will be used for ‘onward movement’ of Americans and Afghan allies who are already in ‘safe havens and interim staging bases’, according to a statement from Defense Department spokesperson John Kirby.

‘The Department does not anticipate a major impact to commercial flights for this activation,’ he assures in his statement on the activation.

Stage 1 of the CRAF gives the Department of Defense access to commercial air mobility.

The commercial aircraft will not be flying into the Hamid Karzai International Airport in Kabul, Afghanistan. Instead, planes will be used to aid in the airlift of tens of thousands of evacuees, ferrying Americans and Afghans onward to the U.S. from staging bases in Qatar, Bahrain and Germany.

Planes used for this stage of evacuation include four from United Airlines, two from Hawaiian Airlines and three from each – American Airlines, Atlas Air, Delta Air Lines and Omni Air.

Military flights will continue to go to the airport in Kabul to get refugees out of Afghanistan and to these regional bases.

Kanye West and Irina Shayk Have Reportedly Ended Their Relationship

Winter Outfits for Kids: It Is Time to Get Ready | Luxury Activist 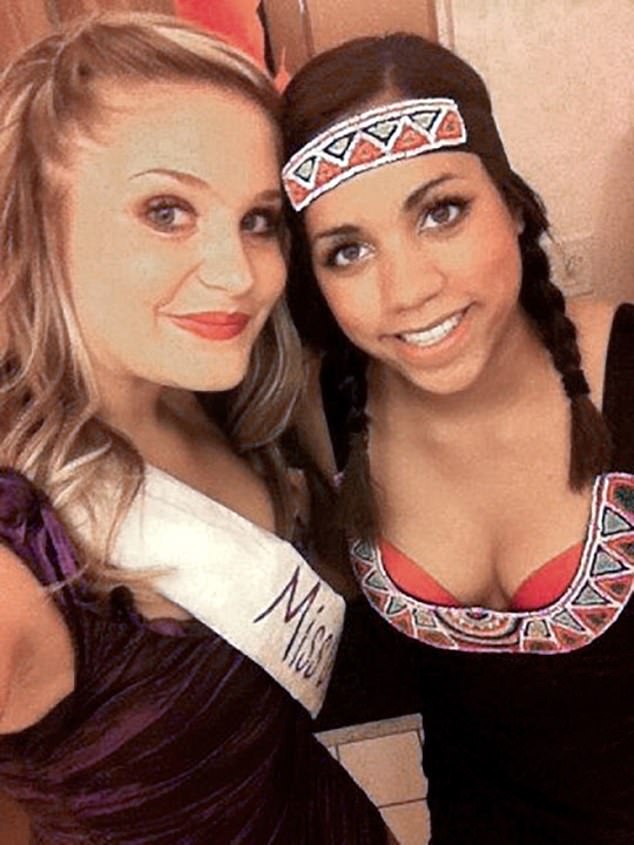 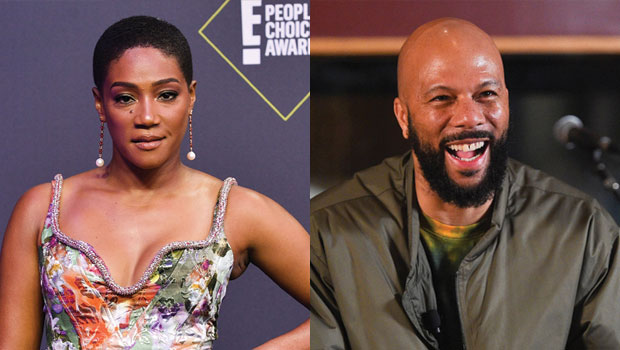 Tiffany Haddish Reveals The Status Of Her Romance With Common, Her Feelings About A ‘Girls’ Trip’ Sequel & More 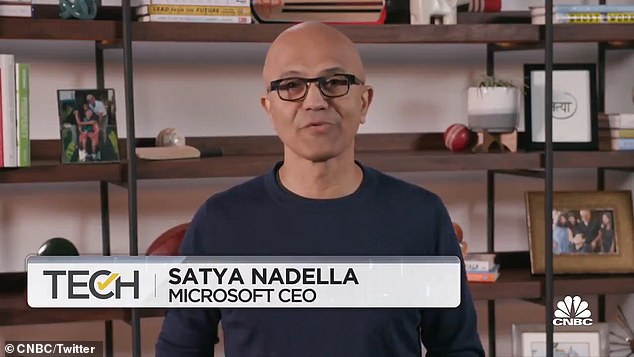 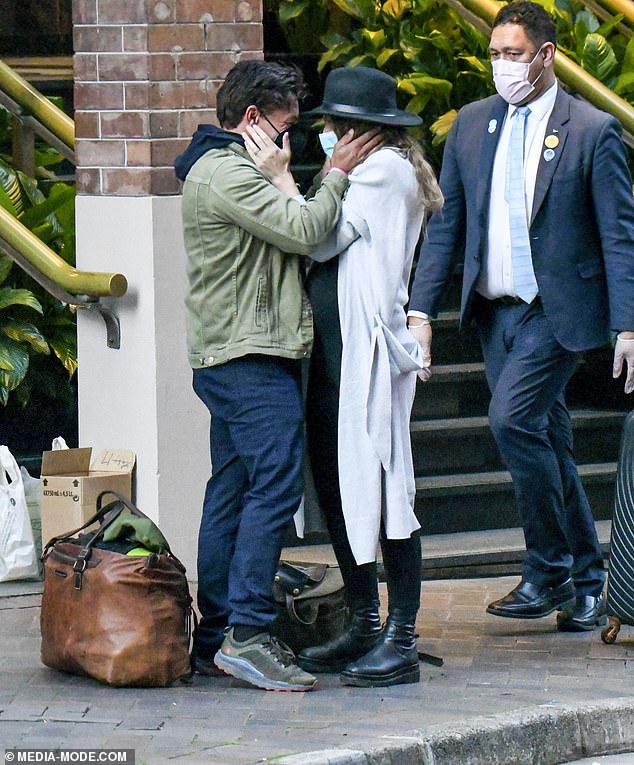