A sudden burst of machine-gun fire echoed over the fields, followed by a strange buzzing over our heads as we trudged along a path through a cluster of destroyed summer houses clinging to a hillside.

‘That’s a drone,’ said Sergiy, shifting the Kalashnikov automatic rifle on his shoulder as flakes of thick snow fell from the foggy skies. ‘They are used before artillery attacks,’ he added, before urging: ‘Let’s move faster out of here.’

We did not need much encouragement. We had just passed the grim memorial to two soldiers killed here on the eastern Ukraine frontline of what had been Europe’s forgotten war until the world’s attention was gripped by the looming prospect of Vladimir Putin invading this country of 44million people.

Sergiy had also been telling me about a fallen comrade who died in a shelling last September.

‘Only fools are not afraid,’ said the 25-year-old officer, whose daughter is about to celebrate her first birthday. ‘I’m afraid of being killed or badly injured, not just for myself but for my family. And every soldier on the frontline has a family.’

As we moved swiftly over the frozen ground, the scenes around us looked like a film set with blown-out buildings, abandoned toys and clothes, smoke billowing from chimneys and armed soldiers clad in winter camouflage uniforms.

Nearby, where the car I had used to get here was parked, was the mangled wreckage of a restaurant struck by artillery fire four months ago. Also, a crude sign warning of sniper fire. Several stray dogs barked at us before coming to say hello, their tails wagging.

This is the reality of Russia’s assault on Ukraine, which, for all the talk of troops now massing around the country’s borders and of Putin launching an invasion, began here in the Donbas region eight years ago after nationwide pro-democracy protests ousted the Kremlin’s stooge president of the country in 2014.

Nearby, where the car I had used to get here was parked, was the mangled wreckage of a restaurant struck by artillery fire four months ago. Also, a crude sign warning of sniper fire. Several stray dogs barked at us before coming to say hello, their tails wagging.

This is the reality of Russia’s assault on Ukraine, which, for all the talk of troops now massing around the country’s borders and of Putin launching an invasion, began here in the Donbas region eight years ago after nationwide pro-democracy protests ousted the Kremlin’s stooge president of the country in 2014.

Putin’s response, as I witnessed back then, was brutal. The Kremlin illegally seized Crimea, sparked separatist insurgencies in eastern Ukraine – and started a war that drags on today over the breakaway pro-Moscow ‘republics’ of Donetsk and Luhansk.

The frontline runs like a livid scar for 175 miles along Ukrainian soil – and in places such as Avdiivka, a town near Donetsk, the rival forces are dug into positions with trenches snaking over the land like a ghastly re-enactment of the First World War.

The two sides are locked in wary stalemate, a legacy of the ceasefire deal in July 2020 after a conflict that has left at least 14,000 dead and two million more displaced. But the armistice is regularly broken – as proved by that machine- gun fire.

‘Russia is like a shark – once it smells blood, it keeps on biting,’ one soldier told me, reeling off a list of incidents from history before warning that if Putin tries to grab more of Ukraine, it would lead to another giant conflagration engulfing Europe.

Sergiy, head of a unit from the 25th Airborne Brigade, led me along the icy trenches where his troops face across to the forces of the Donetsk People’s Republic (DPR), who are aided, armed and almost certainly reinforced by the Russian military.

This is a place where danger lurks around every corner, heads must be kept down, holes are dug into the dirt for hiding – and soldiers die or are wounded with hideous regularity. Nine Ukrainians were killed last month and three wounded this week.

Over the two days before my visit, there were more than 900 ceasefire breaches – such as grenade attacks, mortar shelling and shootings – in the Donetsk region alone, according to data collected by international observers.

Sergiy said the trenches and lookout posts dotting the hillside had been dug before his unit’s arrival last September by troops who were forced by constant attacks to leave the safety of nearby houses. Roots and wires poke through gaps in the corrugated steel lining.

This friendly officer pointed out Kruta Balka, a group of houses on a hillside 500 yards away. ‘DPR soldiers are stationed in the middle of the village. They’ve dug trenches between the houses so that we cannot see them as they move around.’

Sergiy has no doubt that his forces are facing Moscow’s military. He says the Donetsk People’s Republic had exhausted its supply of local volunteers such as miners from Donbas in 2015. ‘These are professional soldiers from Russia,’ he added. ‘They know how to use their weapons. There is no random shooting in the daytime.’

Later, we visited a lookout post where one of his men was on three-hour guard duty, watching through binoculars in his bunker over enemy lines that lay beside a line of tall trees about half a mile in the distance. ‘It’s quieter during the day but there might be more shootings at night,’ said the lookout, Dmytro. ‘They shoot nearly every day. We are just making sure they don’t move forward.’

So what would he do if he suddenly saw Russian tanks rolling in? ‘I’ll pass the information to my seniors,’ he said sternly.

There was laughter when I asked if this situation felt like a rerun of the First World War – and Dmytro responded that he was too young to recall that conflict. 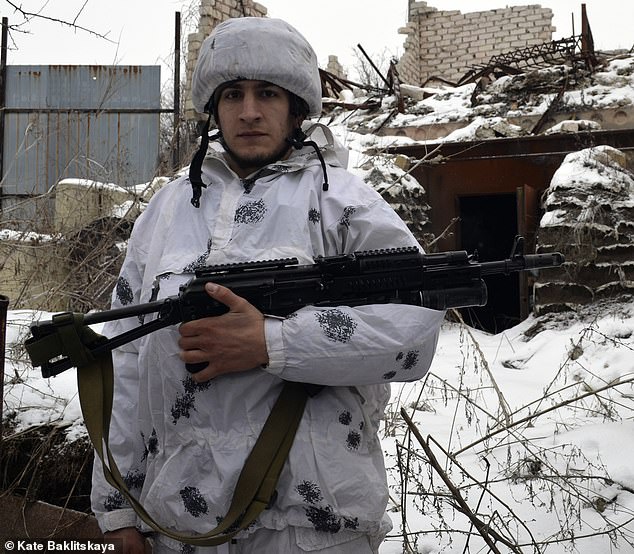 Over the two days before my visit, there were more than 900 ceasefire breaches – such as grenade attacks, mortar shelling and shootings – in the Donetsk region alone, according to data collected by international observers. Pictured: A member of Ukrainian troops on the frontline

These soldiers spend up to nine months on duty in this dystopian landscape, where temperatures can fall to -13F (-25C). They sleep in the ruined houses, taking turns to cook for a week. In one kitchen, a pot of borscht bubbled on the stove.

In another room, where plates of sausage and cheese sandwiches sat on a table, I noticed an Orthodox religious icon hanging above a roaring log fire. Were many of the soldiers devout? I asked Sergiy. ‘Everyone has God in their hearts,’ he replied.

Many of the buildings are daubed with crude graffiti with phrases such as ‘Glory to Ukraine’ and ‘Let’s kill Muscovites’, while the rival forces are close enough to taunt each other with obscenities and patriotic slogans shouted over the no man’s land.

My escort to the frontline was Lieutenant Tatiana Zaritska, 39, a fiercely patriotic former kindergarten teacher who joined the military with her husband after the Russian-backed separatists seized Donetsk and Luhansk.

As we approached her unit’s frontline base, she warned that she was going to accelerate fast due to the risk of snipers in a stretch of uncovered road. Later, she said she often drove home after dark without using headlights to avoid drawing fire. She began her military involvement by helping organise food and clothing for the fighters when Putin began inflaming tensions in 2014. ‘I felt I had to do something when the first Ukrainian soldiers began to die,’ she said. ‘I took it all very personally.

Now she is an officer of the airborne brigade, a veteran of 18 parachute jumps and a fully trained fighter. Her younger daughter, aged 13, plans to enrol in a military academy next year to follow her mother into the armed forces.

Lieutenant Zaritska is scathing about the Kremlin’s treatment of her nation in recent history – from the time in 1933 when four million Ukrainians were starved in man-made famine under Joseph Stalin, through to stifling of their language under the Soviet Union. 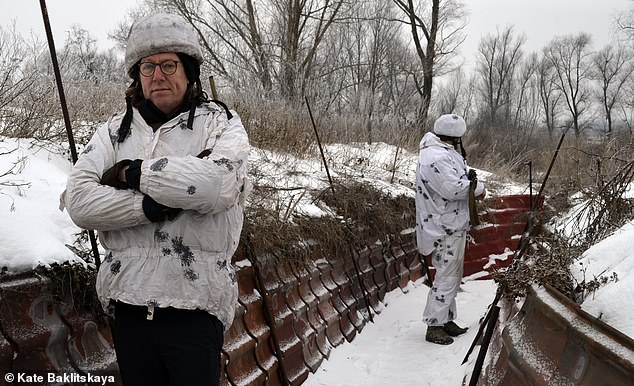 Yet we must hope these skirmishes around these trenches are not simply a dress rehearsal for a much bigger horror show in this eastern corner of Europe. Pictured: Journalist Ian Birrell in Ukraine

Unlike some comrades, she fears Putin – with his imperial ambitions – may be about to attack Ukraine. ‘I hope this situation will be resolved peacefully and Russia will not make a full-scale invasion, but they are stupid enough to do anything,’ she said.

Despite such scary times, she insists she is not afraid. ‘I know why I am here and I know what we are fighting for,’ she said, adding with emphasis: ‘Many Russians will be killed.’

Other Ukrainian soldiers, serving on the frontline of a war that has often been forgotten but might soon explode into something far worse, talk with similar bravado about the prospect of confronting the menacing Russian forces that currently encircle Ukraine from Belarus in the north west to Crimea in the south.

‘We will be ready if there is war,’ said Evhen, 22, with a typical display of fearlessness. ‘The Russians are the ones who should be afraid since they will be returning in their coffins.’

Yet we must hope these skirmishes around these trenches are not simply a dress rehearsal for a much bigger horror show in this eastern corner of Europe.

On the eve of her Platinum Jubilee, PATRICK JEPHSON illuminates The Queen's humanity and pragmatism 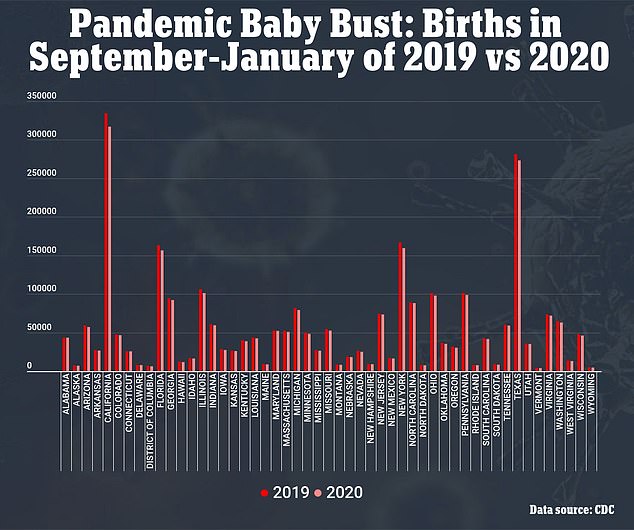 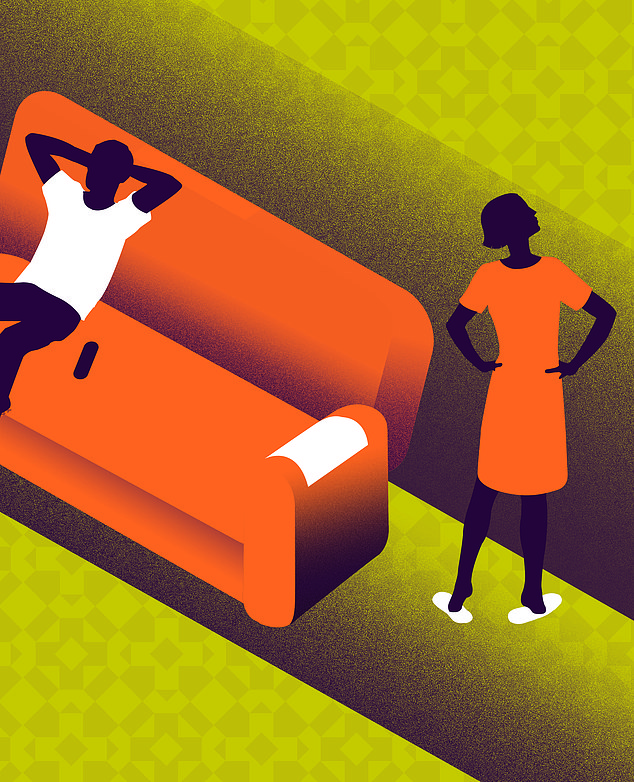 BEL MOONEY: How can I break out of my dull, passionless marriage? 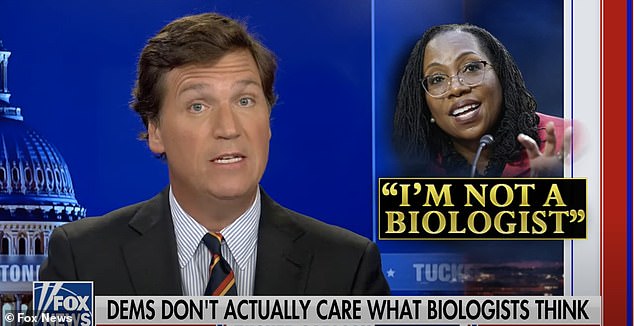 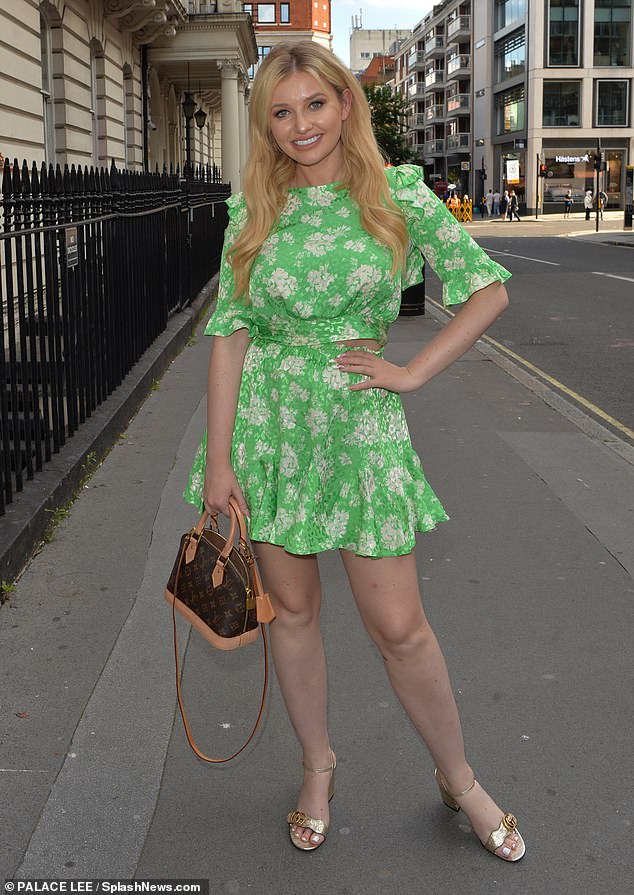