A Nashville hat store owner has issued an apology for selling ‘Not Vaccinated’ patches reminiscent of those Nazis forced Jews to wear in the 1930s and 40s, after major hat producers announced they would stop doing business with the store.

HatWRKS owner Gigi Gaskins had announced that the items were on sale Saturday in a post shared to Instagram.

But she apologized on the social media site on Saturday night, and insisted she did not intend to ‘exploit or make a profit’ from the Holocaust, in which 6 million Jews were murdered.

She insisted she wanted to ‘share my genuine concern and fear, and to do all that I can to make sure that nothing like that ever happens again’ when she announced the patches were on sale earlier that day.

‘In no way did I intend to trivialize the Star of David or disrespect what happened to millions of people,’ she wrote. ‘That is now who I am and what I stand for.’

‘I sincerely apologize for any insensitivity.’

Her apology came after major hat brands Stetson, Goorin Bros and Kangol Headwear announced they would stop doing business with the Nashville store.

HatWRKS owner Gigi Gaskins advertised her Jewish star ‘Not Vaccinated’ badges, reminiscent of those the Nazis forced Jews to wear in 1939, on Instagram Saturday 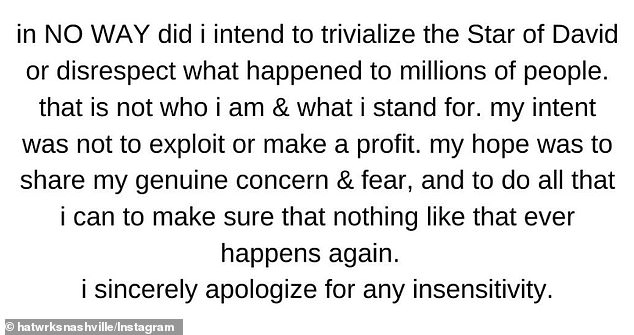 Later that day, she issued an apology on Instagram saying she did not ‘intend to trivialize the Star of David or disrespect what happened to millions of people’ 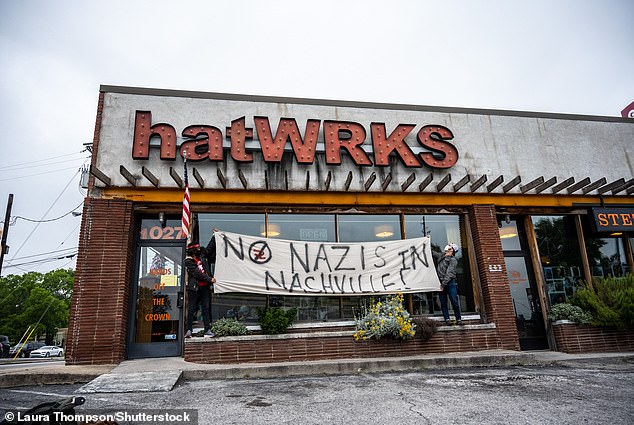 Anti-fascist protestors showed up at HatWRKS in Nashville, Tennessee on Saturday to protest the store’s sale of the yellow ‘Not Vaccinated’ patches

In an Instagram post earlier that day, she announced that the new patches were in stock and were selling for $5 each. She said ‘they turned out great’ and had ‘strong adhesive backs.’

The products are modelled on the yellow stars Jews were forced to wear in Nazi-occupied Europe during the 1930s and 40s. Those yellow stars were used to identify, isolate and humiliate Jewish people.

The stars appear to have been inspired by a recent reference Rep. Marjorie Taylor Greene made comparing Covid-19 guidelines to the Holocaust.

‘Vaccinated employees get a vaccination logo just like the Nazi’s forced Jewish people to wear a gold star,’ Taylor Greene wrote on Twitter earlier this week.

It promptly drew widespread criticism on Twitter, with some anti-fascists protesting outside the store.

Major brands which supply the store also announced they were pulling their business.

‘As a result of the offensive content and opinions shared by HatWRKS in Nashville, Stetson and our distribution partners will ease the sale of all Stetson products,’ the Stetson company tweeted following Gaskins Instagram post advertising the yellow Jewish stars.

Goorin Bros also wrote on Intagram that the company ‘is horrified by the display and selling of the Jewish badge by HatWRKS, a store in Nashville, Tennessee, that sells some of our hats.’

‘The Jewish badge was a key element used by Nazis beginning in 1939 who planned to persecute and eventually murder millions of Jews,’ the company wrote. ‘They used the badge to humiliate, segregate and control the movement of all Jews over 7 years old.’

‘To make a mockery of the Holocaust in any form is unacceptable and completely insensitive.’

And Kangol Headwear wrote on its Instagram page that it was done working with the Nashville store, saying, ‘While we respect freedom of speech, respect for humanity must hold a higher place.’ 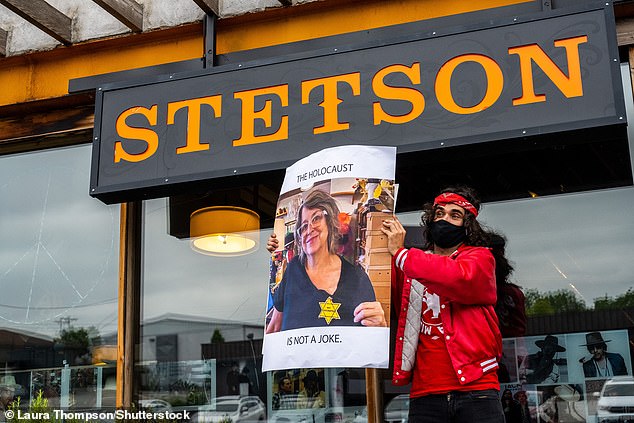 A protestor outside the store holding a sign depicting Gigi Gaskins with the yellow star badge she made. Stetson have since pulled their business from her shop 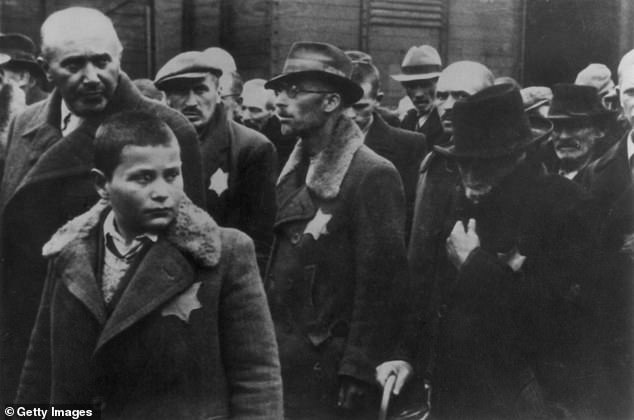 The badges are modelled on the yellow stars Jews were forced to wear in Nazi-occupied Europe during the 1930s and 40s. Those yellow stars were used to identify, isolate and humiliate Jewish people

Despite her apology, Gaskins later complained that she had become a ‘target of the mob.’

In another Instagram post one day after issuing her apology, she wrote: ‘For the past 15 months, I have been pushing back on the government overreach, standing up to group-think, trying to find reason in a sea of irrational.

‘It has 100 percent been fighting the totalitarian march and power grab we are seeing play out across the globe,’ she continued. ‘The power grab is coming in many forms on many fronts. I was willing to put my business on the line to stand up for the freedoms that we still have in our country.’

‘What I didn’t expect is being accused of the very things I was fighting against,’ Gaskins wrote. ‘Was the use of the yellow star an insensitivity? Obviously, so to many, but does that make me an anti-Semite Nazi? No, No it doesn’t.’

She continued: ‘I don’t know what’s going to happen to me — or this world, but they will be looking for the next target. Every time demands are met, it just emboldens.’ 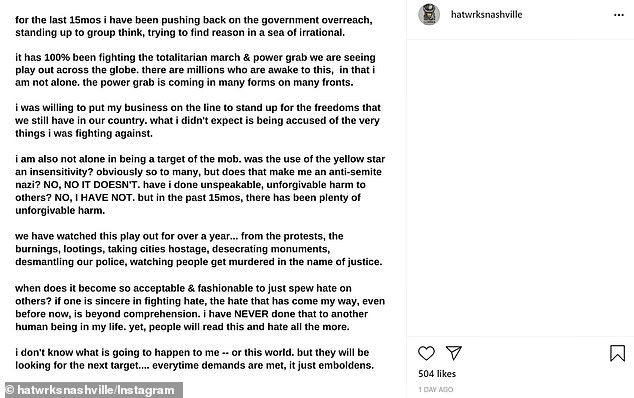 Despite her apology, Gaskins posted on Sunday that she was a target and was not anti-Semitic

Gaskins’ decision to sell the stars had drawn major condemnation from public figures on Twitter.

‘I am ashamed to know that I’ve given these people business in the past; I’ve sent people there. This is vile and repulsive. They trumpet that they’re proud to ‘Stand Up Against Tyranny’ Well, I am proud to say GO F**K YOURSELF. I’ll purchase my chapeaus elsewhere,’ actor W. Earl Brown wrote.

Republican commentator Ana Navarro concurred, writing: ‘I could not believe this could be for real. I like to think such stupidity, insensitivity and ignorance in America cannot be commonplace. It’s real.’

Elsewhere, former Senior Advisor to Donald Trump, AJ Delgado, said that the products were ‘beyond disgusting’.

Ivo Daalder, the former US Ambassador to NATO, wrote: ‘As a young school girl in Holland, my mother was forced to wear a yellow star by the Nazis to identify her as a Jew. It’s beyond grotesque to sell this evil symbol to proclaim one’s not vaccinated. Where does this end?’

Earlier this week, she tweeted: ‘Vaccinated employees get a vaccination logo just like the Nazi’s forced Jewish people to wear a gold star. Vaccine passports & mask mandates create discrimination against unvaxxed people who trust their immune systems to a virus that is 99% survivable.’

Attached to the tweet was a news article about Food City supermarkets dropping mask requirements for vaccinated workers.

Greene said it was a slippery slope to require some sort of identification on whether a person is vaccinated against coronavirus or not.

‘Then…..scan your bar code or swipe your chip on your arm,’ she predicted. 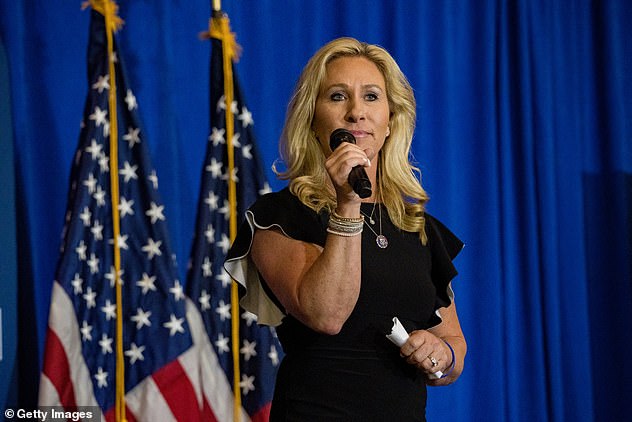 ‘This morning, Marjorie Taylor Greene, Republican congresswoman from Georgia, once again, compared preparations taken against COVID to the Holocaust,’ Schumer, who is Jewish, said.

‘These are sickening, reprehensible comments,’ he added, ‘and she should stop this vile language immediately.’

Greene defended her comparison of Covid restrictions to Nazi Germany by claiming ‘any ration Jewish person’ doesn’t like either. 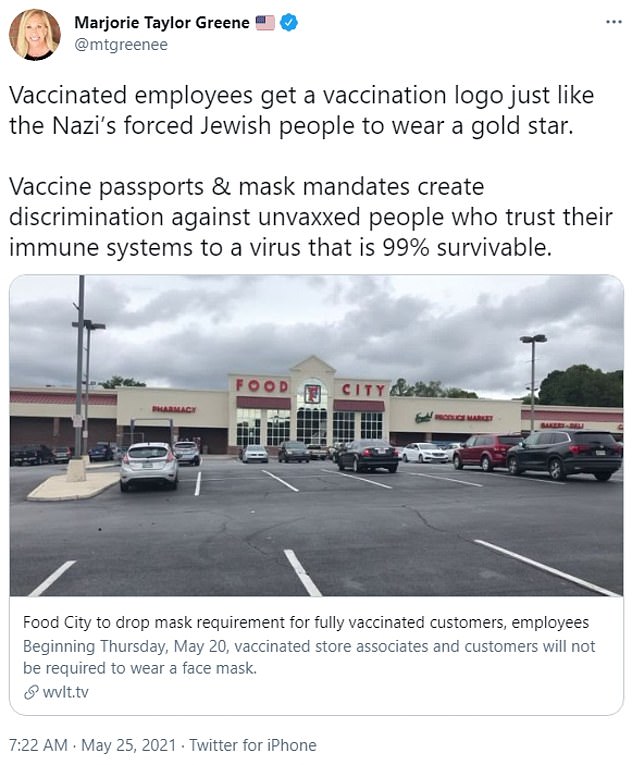 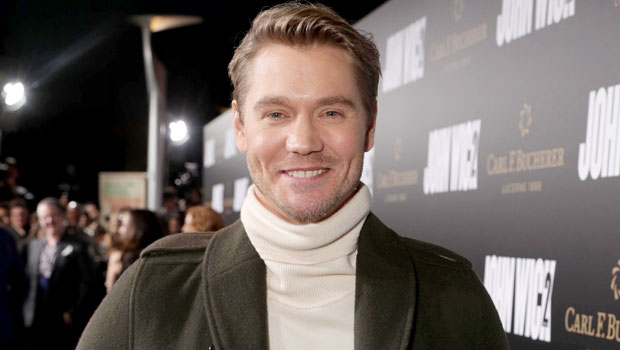 Chad Michael Murray Cuddles His Daughter, 4, In Rare Photo Together: ‘Love Our Family’ 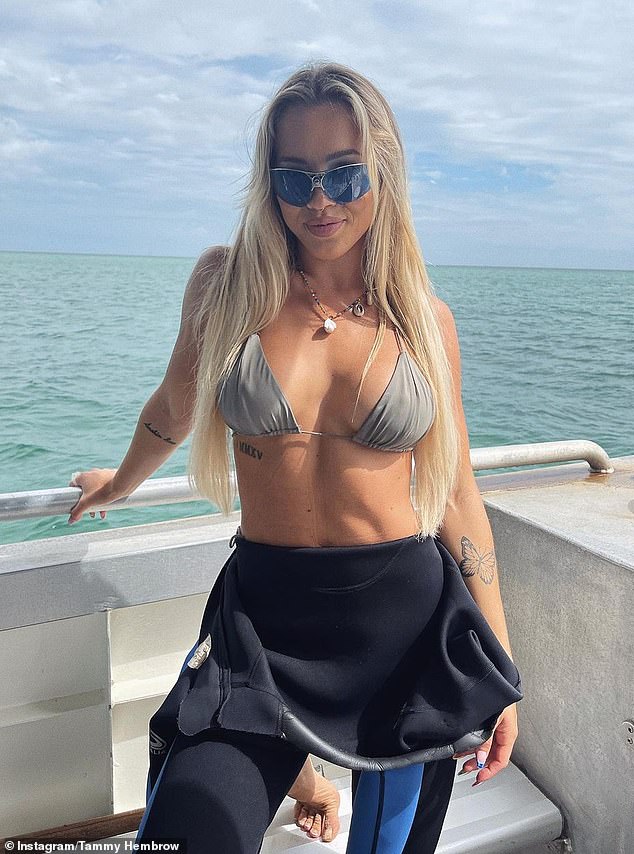 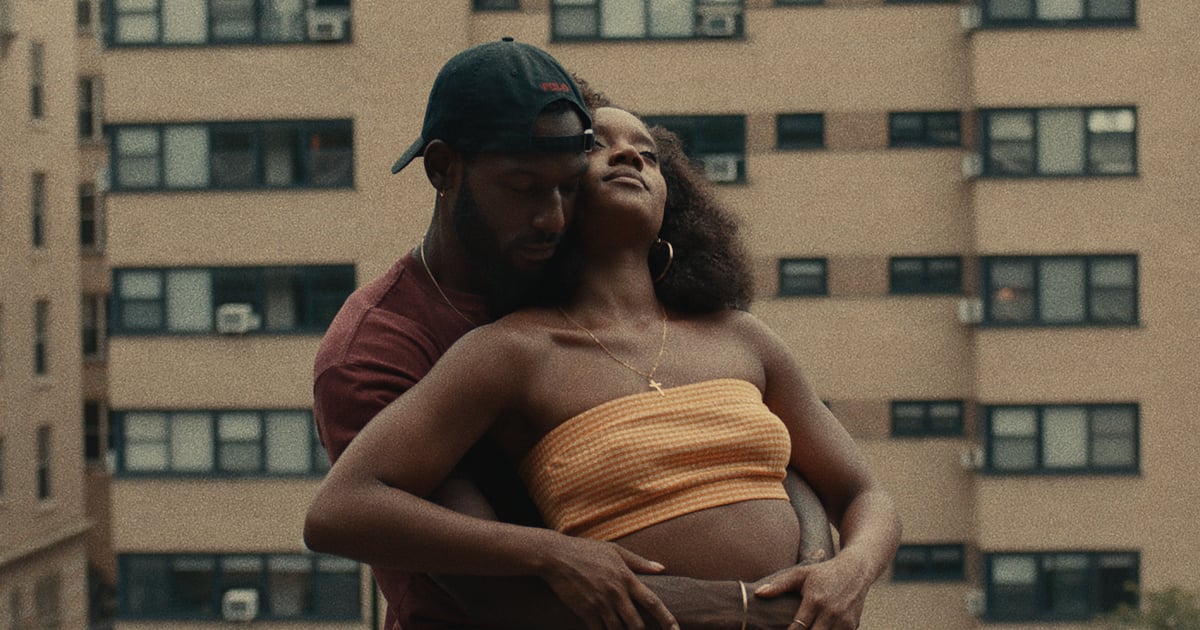