Fascinating 100-year-old photographs that reveal the stark reality of life for black Americans under segregation decades after the abolition of slavery are up for auction.

The images show women and children wearing ragged clothes and no shoes while picking cotton in the South during the Jim Crow era.

The photos, taken at the turn of the century along the route of the Southern Railway across Virginia, Carolina and Mississippi, were used for a series of magic lantern lecture slides to teach British audiences about life after Emancipation.

Despite slavery being abolished in 1865 with the 13th Amendment, black people still lived under segregation for decades which denied them access to education, transport and public facilities.

They also include a number of images of white farmers adapting to the postwar agricultural shift after slaves were freed but received little pay for taxing work.

The lecture, which was titled ‘Life Among the Darkies’, shows the prevailing racist attitudes at the time on both sides of the Atlantic.

The lecture slides were supplied by E G Wood, a lantern and slide manufacturer from London.

The glass slides, some of which were hand coloured, have emerged for sale at David Lay Auctioneers in Cornwall, Great Britain, and are on sale tomorrow.

It is not known who captured the revealing images which have been consigned by a prominent vintage photography dealer with the auctioneers.

Mimi Connell Lay, of David Lay, said: ‘The photographic images on these slides are remarkable documents of social history, capturing African American and some white agricultural workers and their families in Carolina, Virginia and Mississippi.

‘Although the subjects, many barefoot and in threadbare clothes, clearly live in great poverty, there are many beautiful images.’

A group of black women wash clothes while standing barefoot in the dirt in one of the series of lecture slides taken in the American Deep South around 1900. After the Civil War, many emancipated women were employed as washer women or laundresses. More than half of African American women worked as washerwomen, typically earning $4 to $8 per month, worth around $130 today. Around 500 washer women organized a strike in 1881 in protest against their pay, which led to small increases for some workers 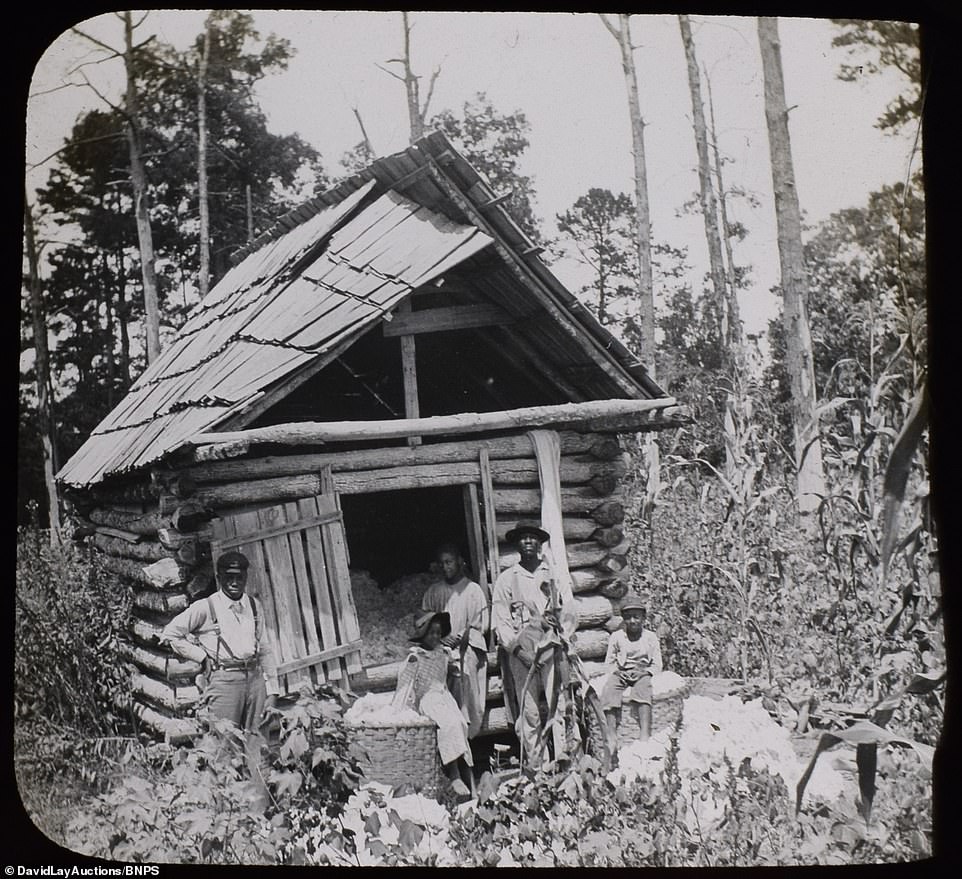 A vast amount of the slaves brought from Africa and the Caribbean to the US were made to cotton pick on plantations during the harvests. But after their emancipation in 1865, many continued working in the fields. But in the South, the wage system had not been such a part of plantation life, meaning many businesses failed and workers were paid a pittance. Instances of racial violence and lynchings were still a feature of life on the farms which led to uprisings against owners. In 1891, a cotton-picking strike in Arkansas led to nine of the protesters being lynched 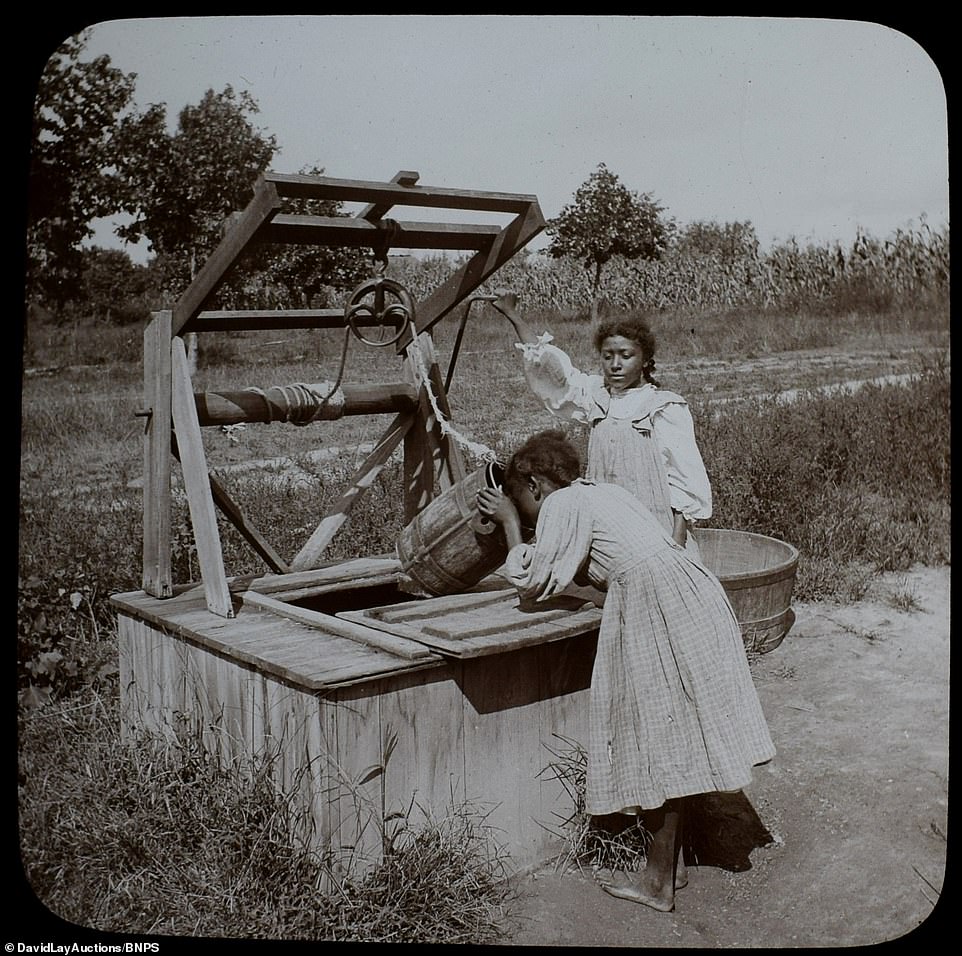 Two barefoot young women wearing pinafore dresses draw water from a well in one of the series of lecture slide images up for auction tomorrow. Schools were segregated during the Jim Crow era, with schools for white children receiving vastly more funds. The few schools available for black children were overcrowded and many did not attend as they were needed for work on the farm. Those that did attend were often forced to take classes all together in one room, with pupils from reception to eighth grade 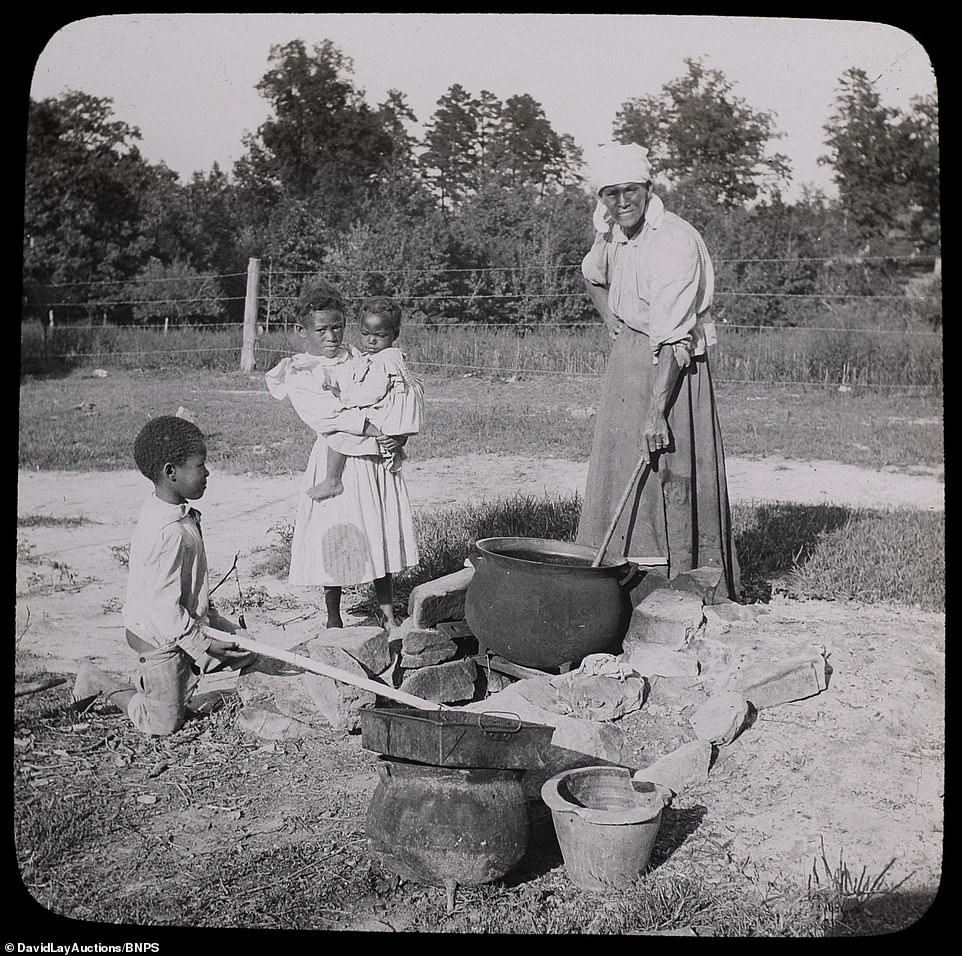 A family cooks together outdoors over a pit, wearing threadbare clothes and no shoes. Slavery was abolished in the US in 1865 with the passage of the 13th Amendment, which banned the practice apart from punishment for a crime. Slave owners were not compensated and Texas was the final state reached by the Union soldiers. On June 19, 1865, the army reached Galveston, Texas, where they declared the war and slavery were over. This date is now remembered as Juneteenth, a federal holiday in the US 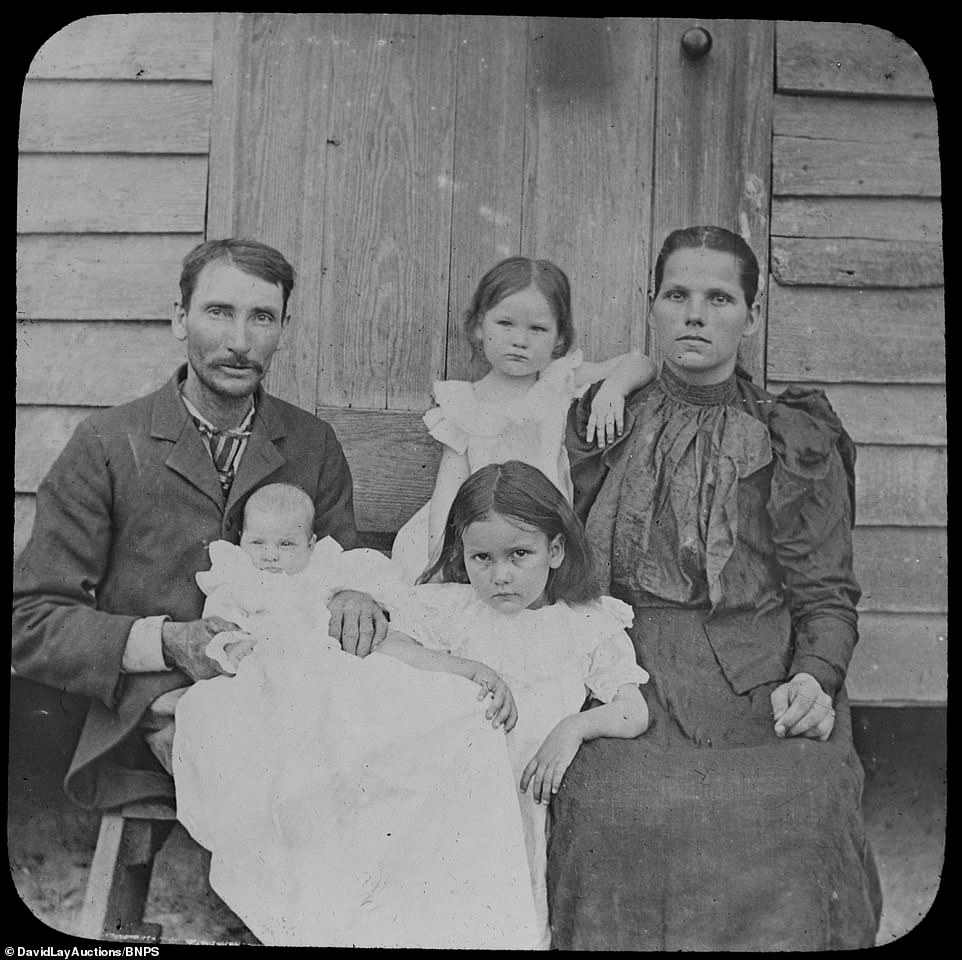 Among the series of images is a white farming family posing for a photo together.  The majority of white farmers had worked on smaller subsistence farms that provided food for their families and locals before Emancipation. But after the Civil War ended, the price of cotton plummeted and larger plantation farms were split up into smaller farms. Poorer white farmers then then started growing their own cotton 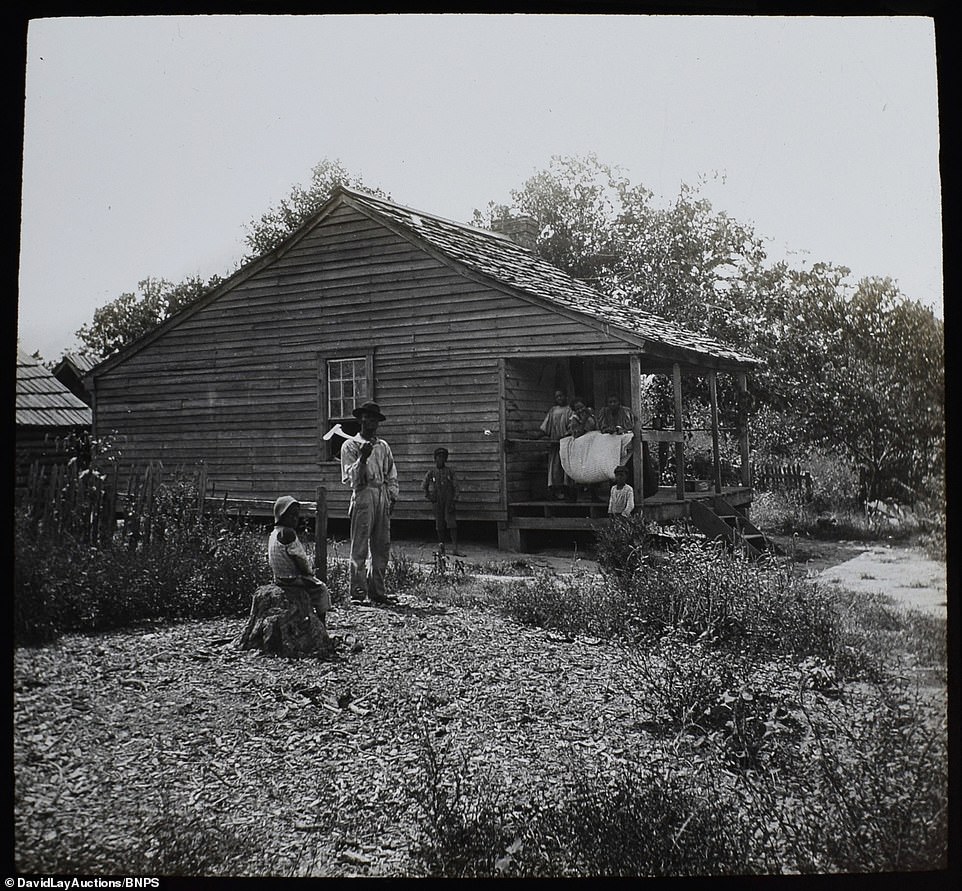 A black family stand around a wooden house in the series of images captured around 1900. The 13th Amendment to the United States Constitution, which was ratified in December 1865, secured the freedom of slaves apart from as a potential punishment. Many of the people pictured in the lecture slides would have likely been either born into slavery or be descendants of slaves 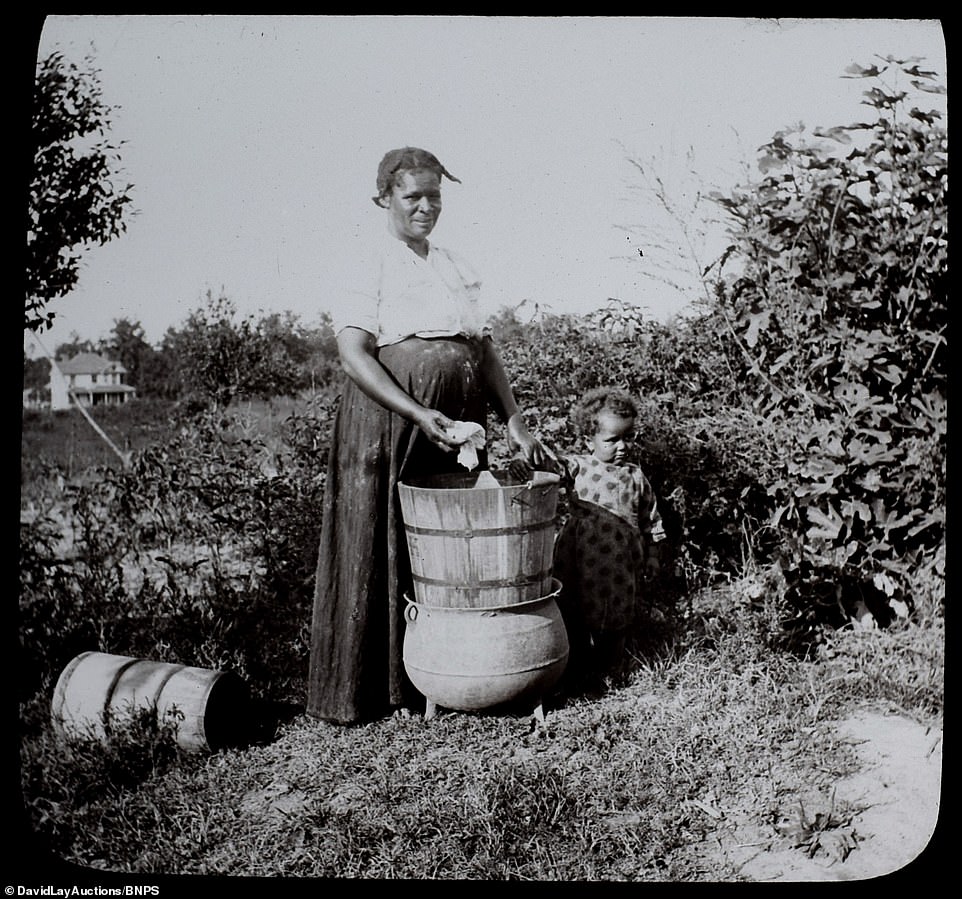 A woman stands with a young child over a barrel in one of the stark images of agricultural life in the American South. Controversial rules, dubbed the Jim Crow laws meant that all public facilities in the Southern states of the former Confederacy had to be segregated. The laws, which were enacted between 1876 and 1965 were intended to give African Americans a ‘separate but equal’ status, although in practice lead to conditions that were inferior to those enjoyed by white people 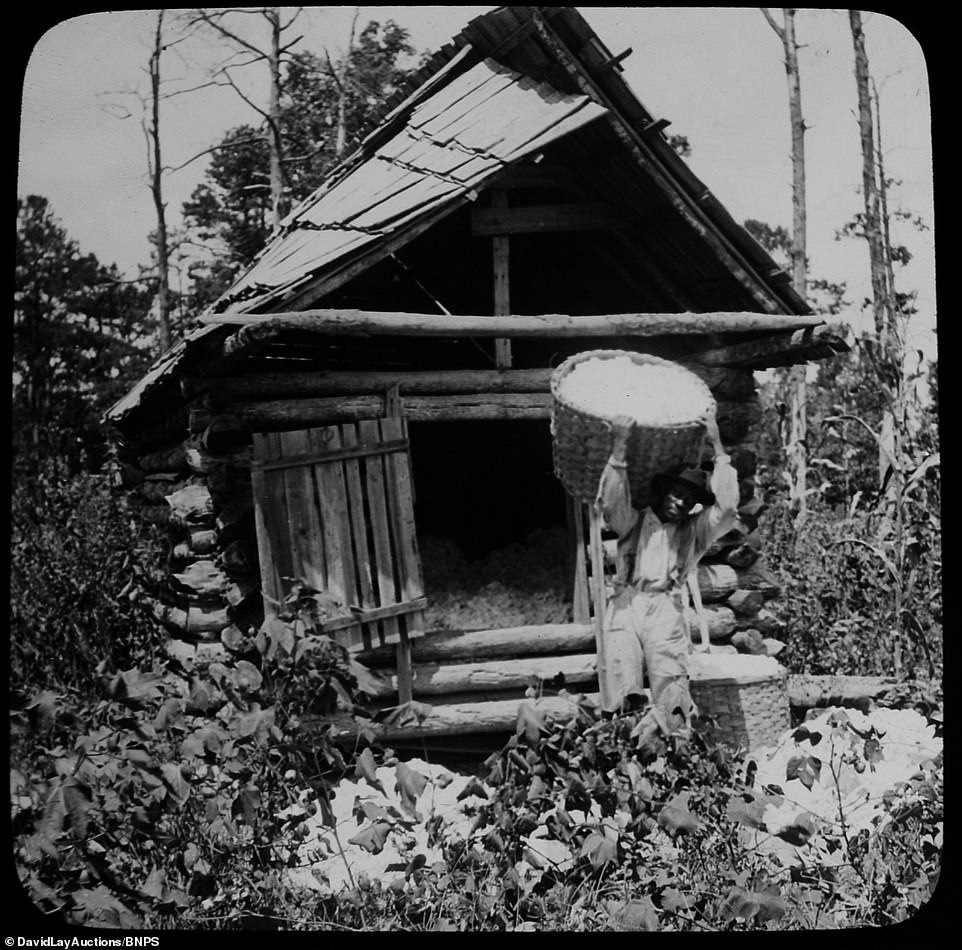 A man carries a basket of cotton from a wooden hut. In the decades after the Civil War, most African Americans who lived in the ‘cotton kingdom’ of the deep south continued to work for white people, with a majority in the cotton business — and while they were free, their wages often didn’t reflect that 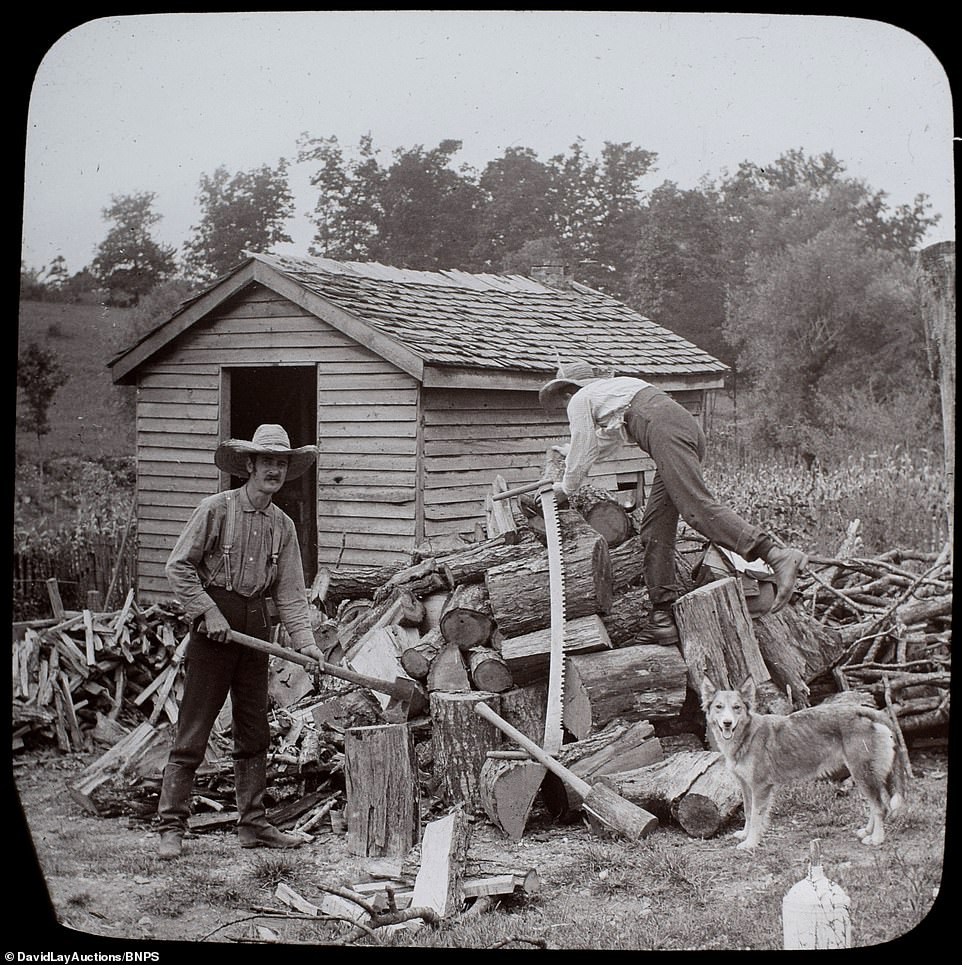 White farmers chop wood using axes and saws while a dog watches on. The images were turned into magic lantern slides and used to illustrate lecture tours around Britain, showing people what life was like in southern USA at the time 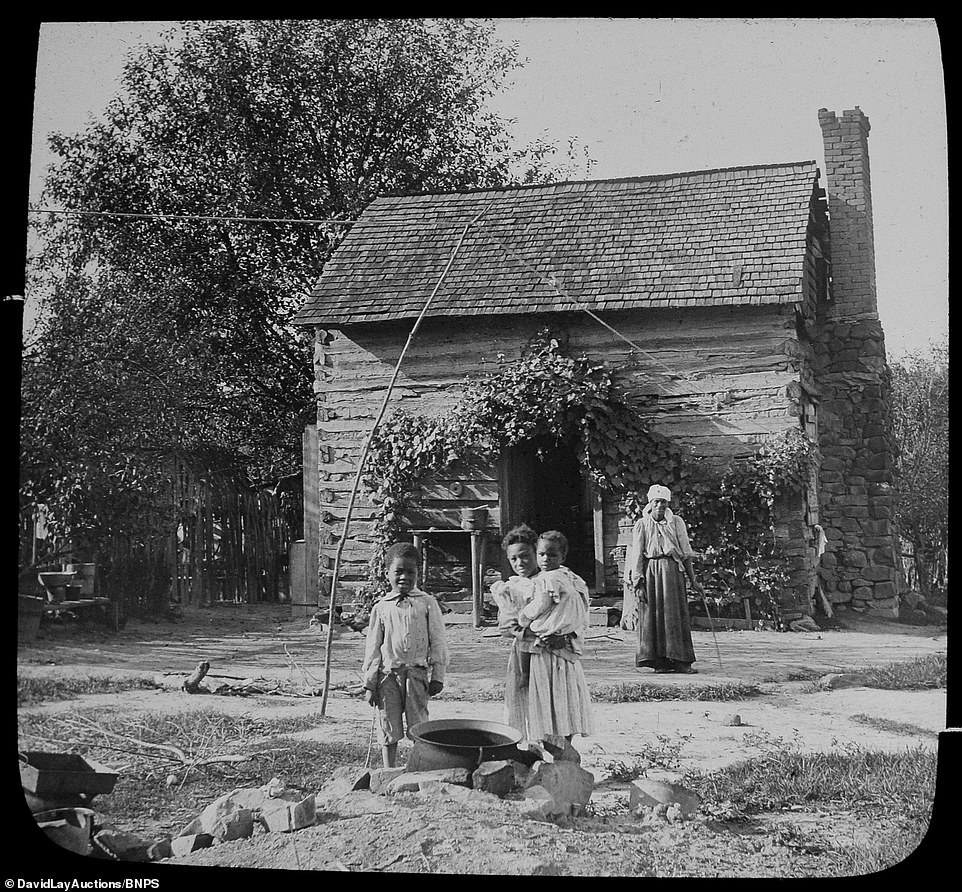 A family stand in front of a house in one of the photos up for auction tomorrow. The US was one of the last major Western nations to abolish slavery and many forms of legislated segregation remained in place until the Civil Rights movement in the 1960s 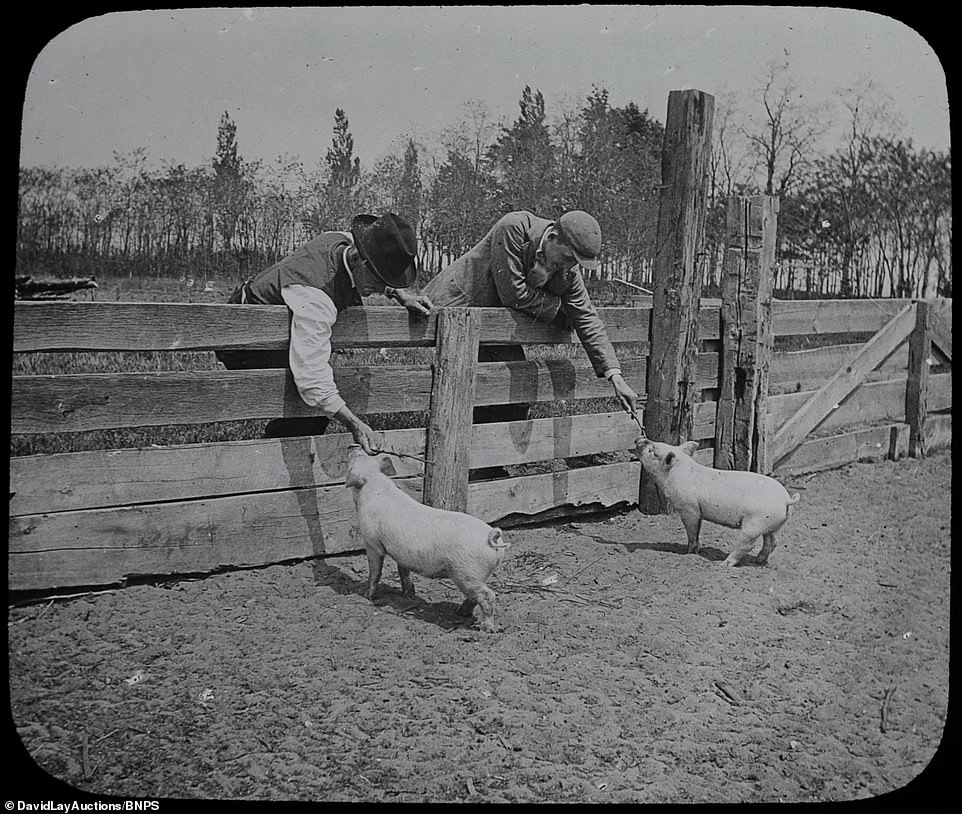 Two white agriculturists tend to their pigs at a farm in the South. The 44 glass slides – seven of which are hand-coloured – have emerged for sale at David Lay Auctioneers of Cornwall, England

How segregation continued for decades after slavery was abolished

The Emancipation Proclamation of 1863 and the 13th Amendment of 1865 brought an official end to slavery – but for newly freed African-American slaves, life didn’t change overnight after the Civil War from 1861 to 1865.

The 13th Amendment stated: ‘Neither slavery nor involuntary servitude, except as a punishment for crime whereof the party shall have been duly convicted, shall exist within the United States, or any place subject to their jurisdiction.

‘Congress shall have power to enforce this article by appropriate legislation.’

The 14th and 15th Amendments in 1868 and 1870 respectively then granted citizenship status to all citizens including former slaves and allowed them to vote in the 1868 presidential election, but in practice this did not occur for many black Americans.

Instead of granting former slaves a glorious moment of liberty, some free-slaves were required to keep working on the same plantations, convicts were forced back into slavery and sharecropping made African-Americans slaves through debt.

The name Jim Crow became a pejorative term for black Americans after the popularity of the Jump Jim Crow minstrel song and dance that was performed in blackface in the 1830s.

Thomas D. Rice performed the role of Crow, who was believed to be based on a real disabled slave, in wildly popular tours across the US and Great Britain.

When restrictions were placed on the rights of black people in the later 19th century, Jim Crow became an epithet for the rules which reinstated White Supremacy.

It was not until the Civil Rights movement that many of these barbaric laws were finally removed in 1965.

PokerNews Podcast: Do Your Holiday Shopping with Our 2021 Gift Guide

Crucifixion: 'World's best example' found in Cambridgeshire in form of slave with nail in his heel 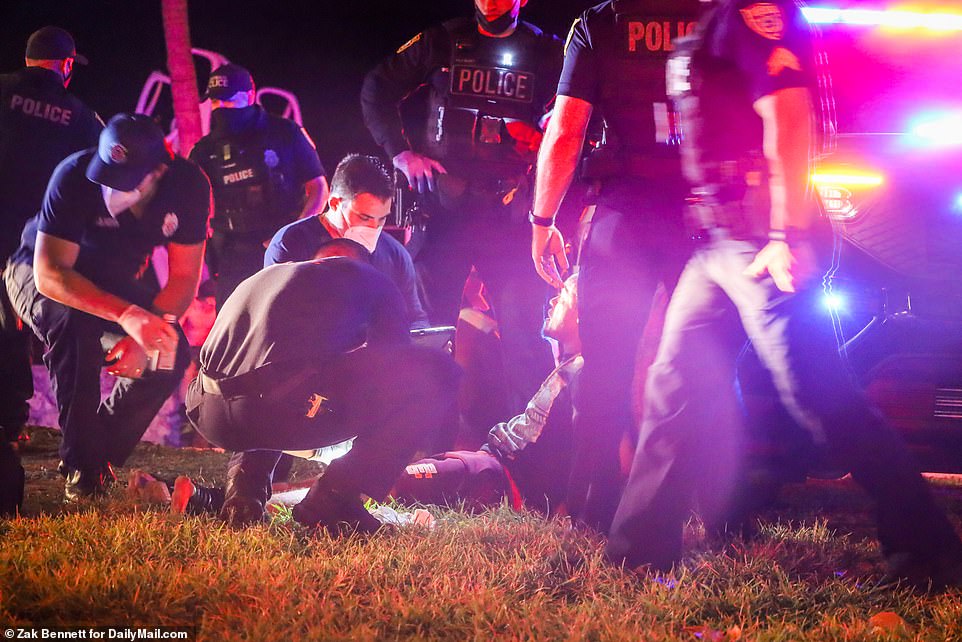 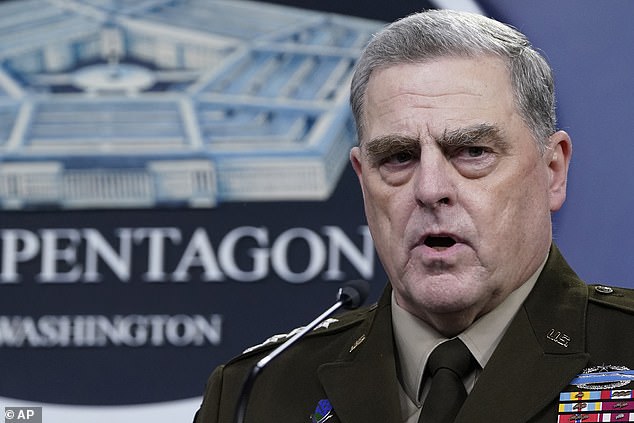 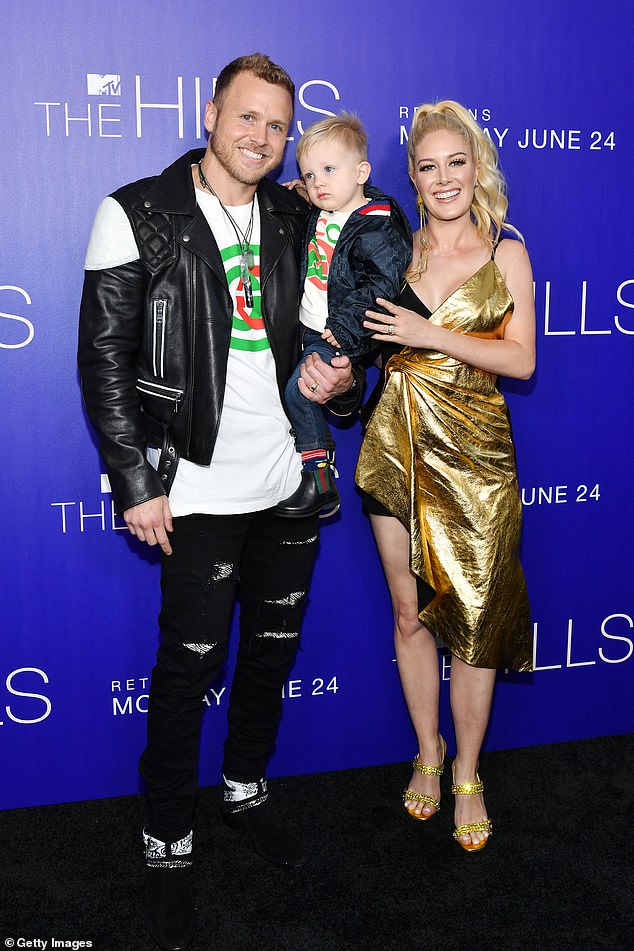 Spencer Pratt reveals biggest reality TV payday he ever got 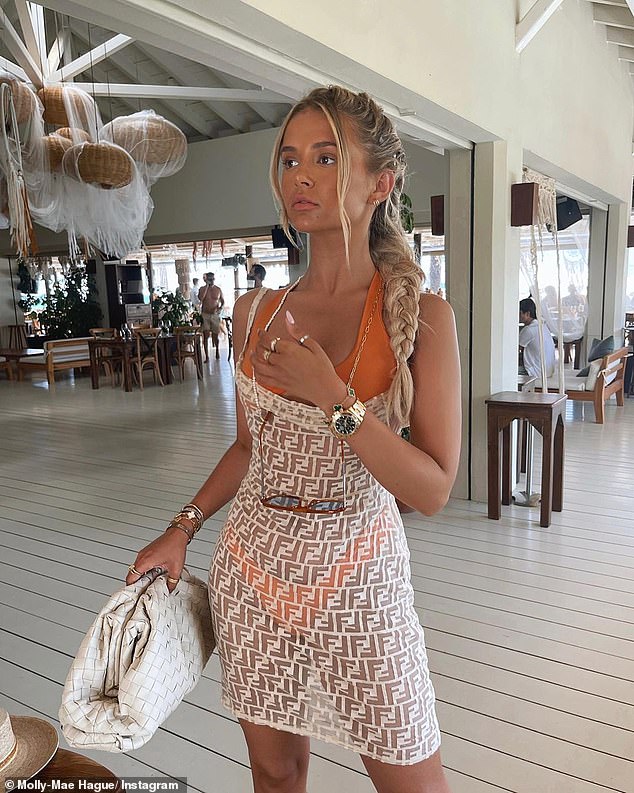 Ukraine tensions: US warns Russia of consequences if ‘any’ troops cross border
37 mins ago

Was 2021 the best year for Cryptos? – InsideBitcoins.com
43 mins ago