Yesenia Cardona, 23, (pictured) from Guatemala was among 13 migrants who died in a deadly car crash on Tuesday after illegally crossing the border from Mexico

A 23-year-old victim in Tuesday’s horror crash in California involving an SUV carrying 25 people over the Mexican border and a semi-truck was traveling with her mother from Guatemala, her family has revealed.

Yesenia Cardona and Berlin Cardona, 47, left Guatemala over a month ago and had last contacted their family in the United States on Monday when they reached Mexicali, the Mexican city bordering Calexico.

In the early hours of Tuesday morning, they were among 44 people who illegally slipped through a 10 ft gap in the US-Mexican border fence before the Ford Expedition they were traveling in pulled in front of the truck at an intersection causing the fatal crash.

Yesenia died in her mother’s arms, her family said, after passengers of the SUV were flung from the vehicle onto the road in the sudden impact.

Thirteen people were killed in the deadly collision including Yesenia and the 22-year-old driver of the SUV who has been identified as a Mexican national from Mexicali.

Another thirteen were injured including her mother Berlin and the 68-year-old truck driver who is from California.

As of Thursday, eight people remain in hospital. A female teen remains unconscious and authorities have been unable to establish her identify or nationality.

It was one of the deadliest crashes involving migrants sneaking into the U.S. 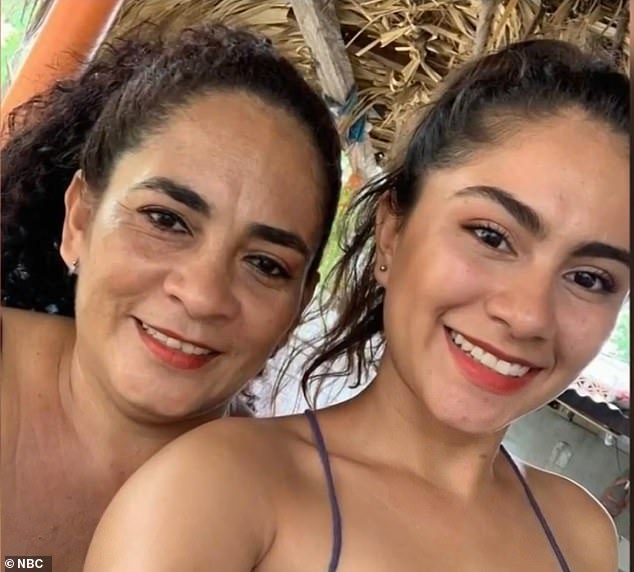 Yesenia was traveling with her mother, Berlin, (pictured together) as they crossed the border 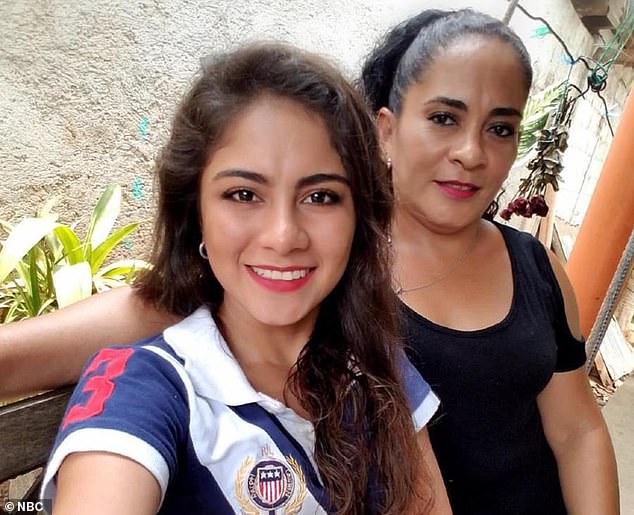 Yesenia died in her mother’s arms, her family said. Berlin (right) was also injured in the crash

The cause of the crash and the reason why the SUV driver pulled into the intersection in front of the truck is still not known.

An investigation into human smuggling is now underway after it was revealed that the Ford SUV had been modified and the back seats taken out so more than two dozen people could be crammed inside.

Another SUV carrying 19 people had snuck across the border through the gap at the same time but set on fire for unknown reasons a short time later.

Border patrol agents responding to the call about the fire found the group hiding behind a nearby bush and they were all taken into custody.

Ten of the people in the crashed SUV were Mexican, the consulate in Calexico said, and Guatemalan authorities confirmed that at least three nationals were also passengers – the Cardonas and another 22-year-old woman who was injured in the crash.

Of the Mexican nationals, three were from the state of Oaxaca, three from Michoacán, and one each from the states of Baja California, Guerrero, Morelos, and Nayarit.

All of the victims have not yet been identified.

Yesenia’s uncle’s Rudy Dominguez has admitted that she and her mother entered the U.S. illegally but claimed that they did so for a better life and because they did not want to die in Guatemala.

‘We don’t want to die in our country,’ Dominguez told NBC San Diego. ‘That’s why we take this type of risk.’

He said he did not know the details of their journey but that his sister is devastated at her daughter’s death and that the last moments they shared together were in the back of the SUV. 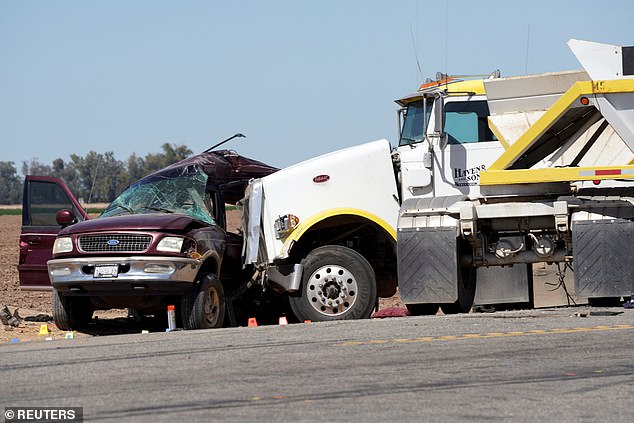 In the early hours of Tuesday morning, they were among 44 people who illegally slipped through a 10 ft gap in the US-Mexican border fence before the Ford Expedition they were traveling in pulled in front of the truck at an intersection causing the fatal crash (pictured) 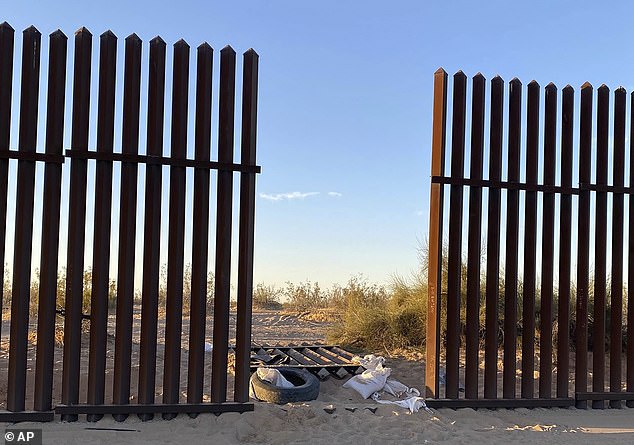 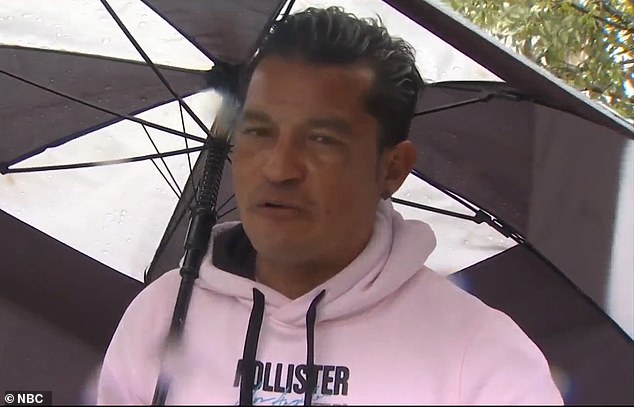 Yesenia’s uncle’s Rudy Dominguez admitted that she and her mother entered the U.S. illegally but claimed that they did so for a better life and because they did not want to die in Guatemala

‘It’s so hard,’ Dominguez said. ‘I mean, it’s so many things [going] on in our brain, and I don’t know how she will handle this.’

Yesenia’s friend Jasmín Solares told Univision that the 23-year-old was traveling to the U.S. for a better life.

She claimed that she had also crossed to the U.S. in a similar fashion nine years ago.

Timeline of 44 migrants crossing U.S. border through gap in fence ahead of fatal crash

5.56 am Tuesday: Agents patrolling the Calexico area alerted that a red Suburban was on fire near Interstate 8 and State Route 115

6.06 am: Border Patrol Agents reviewed surveillance footage which yielded images of two different vehicles leaving the area in proximity of the fence breach.

6.30 am: Agents assisting with the burning red Suburban encountered 19 individuals hiding in the brush nearby and determined they had entered the country illegally through the breach in the border fence.

7.05 am: Border Patrol assistance requested to SUV crash where 25 more people who crossed the border where identified.

‘So, they also put me in a truck like that and they put me on my knees looking down and after that they put another person with their feet open to where I was looking from the front and then they would put another in the same position mine,’ Solares claimed.

‘(We were) dying of pain because a lot of people were on top of us.’

Another uncle of Yesenia’s, Eedy Ivan who still lives in Guatelama said that ‘she didn’t deserve this’.

He told NBC Palm Springs that Yesenia had been working for a finance company but that her family had been struggling even more for money since the pandemic hit.

He says that his niece did not share with him that she planned to cross the border.

‘I don’t get it. She was a sweet girl who was full of life and with purpose. She went to college and had a job.

‘Living in Guatemala is tremendously hard,’ he added. ‘She never told me or anyone of her plans to cross. I never heard it from her.’

‘If I could talk to her now, I would beg her not to go. Those would be my words: Don’t go!’

Authorities have not yet released the identities of the victims in Tuesday’s crash as they work to inform the families, some of whom are in the U.S.

The truck driver has been named as Joe Beltran, 68, from El Centro. He was taken to the hospital with serious injuries.

The men and women in the SUV ranged in age from 15 to 53, and those who survived had injuries that were minor to severe, including fractures and head trauma, officials said.

In total, paramedics took 11 people to area hospitals, police said. At least two are still being treated for life-threatening injuries.

Five of the people injured in the crash were in San Diego area hospitals Thursday, including two Mexican adults in stable condition and a male teen, also from Mexico.

Three other migrants, including two adults from Mexico and the unconscious girl, were hospitalized in Palm Springs.

One of the adults has tested positive for COVID-19. 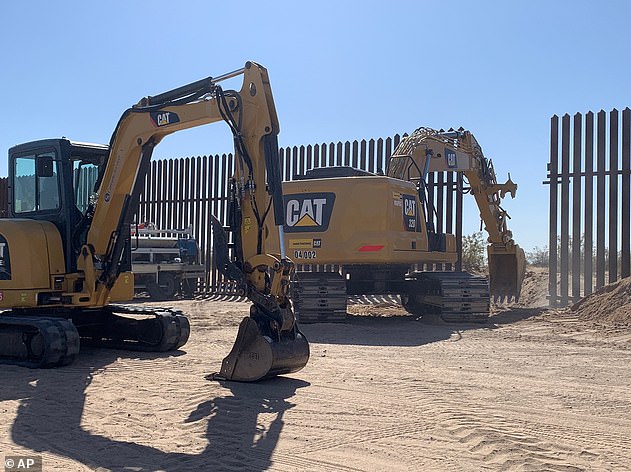 Construction equipment is used to fix a border fence after two vehicles crossed into the US on Tuesday morning. One of the vehicles, an SUV carrying 25 people, was involved in a collision that was one of the deadliest crashes involving migrants sneaking into the U.S. 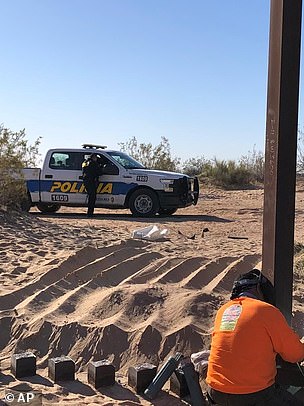 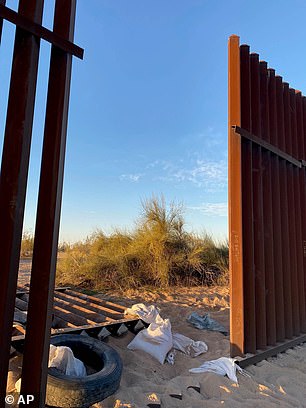 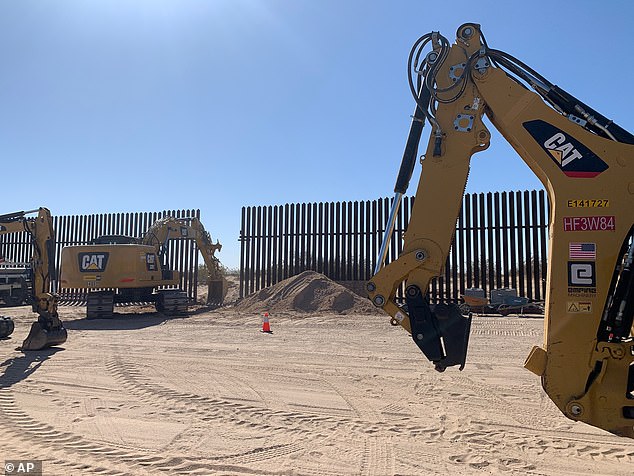 Border Patrol is still working to track down the families of those who crossed the border. There were 19 people in a second car who were taken into custody after the car set on fire

Four Mexican nationals were released from hospital in El Centro on Tuesday but were not taken into custody of U.S. immigration or border officials.

Investigators were trying to determine if the victims of the crash were immigrants or farm workers.

‘All are suspected to have entered the U.S. illegally,’ US Border and Customs Protection said in a statement. ‘Border Patrol is investigating the smuggling events.’

The crash occurred around 6:15 a.m. under a clear, sunny sky at an intersection just outside the community of Holtville, about 11 miles north of the border.

Authorities said the tractor-trailer was heading north on a highway when the SUV pulled in front of it from a road with a stop sign.

It is not clear if the SUV ran the stop sign or had stopped before entering the highway. How fast both vehicles were going also wasn’t yet known.

Less than an hour before hand, the vehicle had slipped through the hole in the border fence. 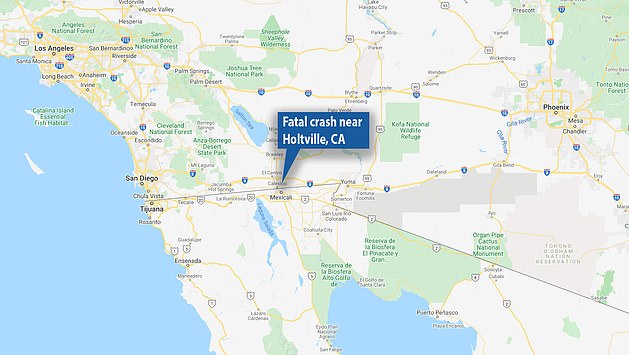 The site of the crash is in southeastern California, about 10 miles east of El Centro and about 11 miles north of the Mexican border. The SUV had crossed the border illegally that morning 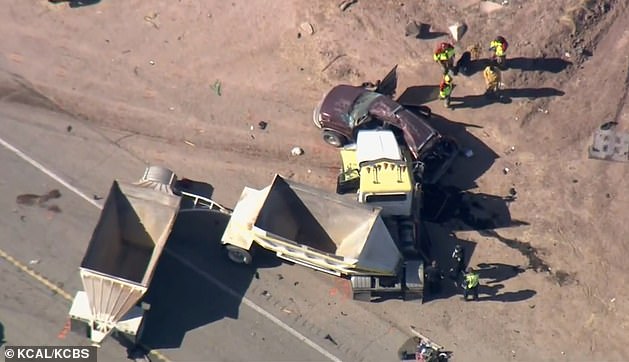 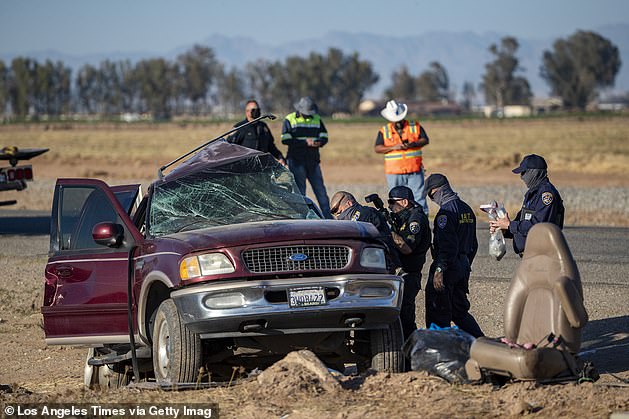 ‘All are suspected to have entered the U.S. illegally,’ Custom Patrol said in a statement of the 25 people crammed into the SUV. ‘Border Patrol is investigating the smuggling events’ 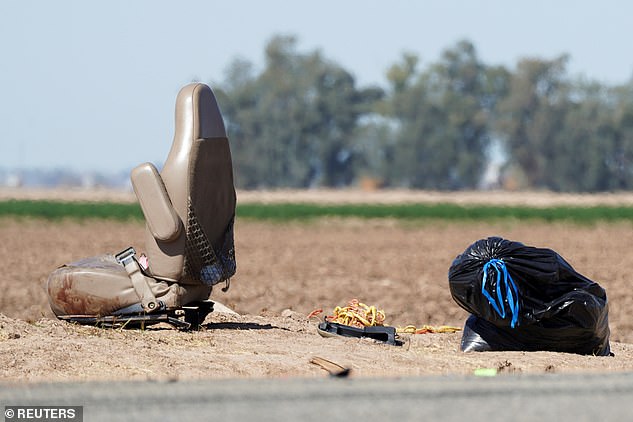 Border Patrol’s El Centro sector released pictures of the 10-foot breach in the International Boundary Fence on Wednesday, as it revealed that surveillance footage picked up the SUV and a Chevrolet Suburban driving through the gap before 6am Tuesday.

Photos show a panel of eight steel poles was lifted out and left on the ground in the desert next to an old tire and other debris.

That section of the fence, consisting of steel bars 18 feet tall, was installed in 2009, some eight years before the Trump administration took office calling for a border wall.

The Border Patrol said its agents were not pursuing the vehicle before the wreck.

‘Initial investigation into the origins of the vehicles indicate a potential nexus to the aforementioned breach in the border wall. Human smugglers have proven time and again they have little regard for human life,’ Gregory Bovino, the Border Patrol’s El Centro sector chief said in a statement Wednesday.

‘Those who may be contemplating crossing the border illegally should pause to think of the dangers that all too often end in tragedy, tragedies our Border Patrol Agents and first responders are unfortunately very familiar with.’

‘We pray for the accident victims and their families during this difficult time,’ he added.

It was also confirmed on Wednesday that US Immigration and Customs Enforcement (ICE) has opened a human smuggling investigation into Tuesday’s horror crash.

In a statement, an ICE spokesperson confirmed to DailyMail.com that ‘Special agents from Homeland Security Investigations San Diego responded [to the scene] … and have initiated a human smuggling investigation.’

ICE declined to comment further at to what led the agency to believe human trafficking was suspected, adding that additional details aren’t being released at this time.

The Mexican Consulate said any family members who need assistance can call (760) 455-2140. Offices in San Bernardino and San Diego can help with translation services if needed, the consulate said.

'I have to get out of this room': Cuomo accuser Charlotte Bennett tells of her horror 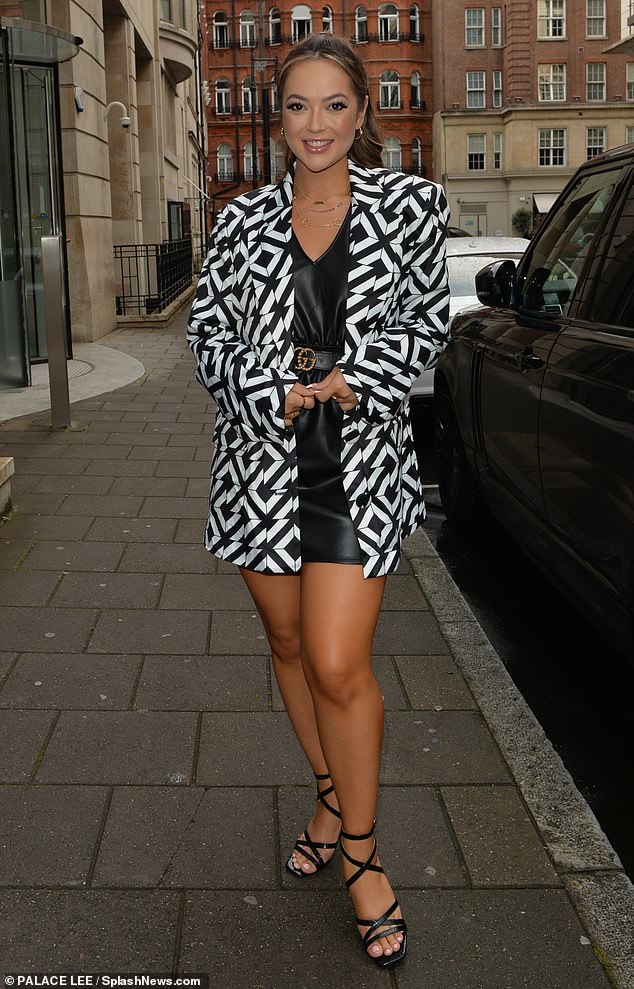 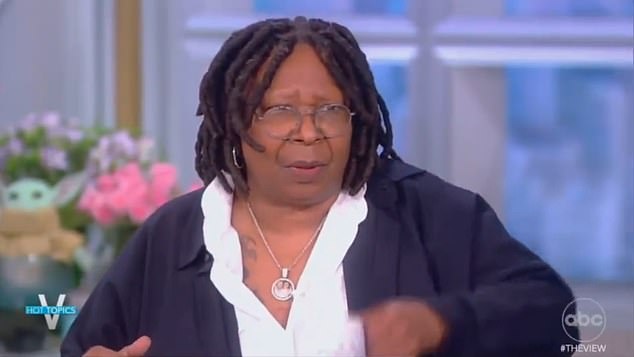 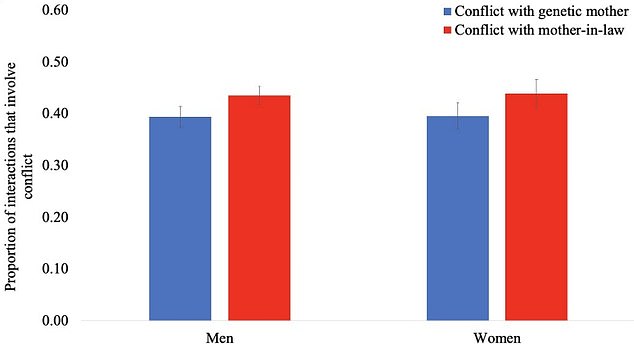 Is your mother-in-law a nightmare? It’s NOT your fault