The CEO of Goya Foods called Donald Trump ‘the real, legitimate and still actual president of the United States’ at CPAC in Florida on Sunday night.

Robert Unanue, boss of the Hispanic food supplier, claimed that ‘the majority’ of Americans voted for the Republican candidate just hours before Trump took the stage in Orlando.

The 67-year-old suggested Trump had been overthrown by communists who had used the Covid-19 pandemic as a political weapon against the incumbent.

Unanue told CPAC: ‘It’s just an honor to be here. But my biggest honor today is gonna be that – I think we’re gonna be on the same stage – as, in my opinion, the real, the legitimate, and the still actual president of the United States, Donald J. Trump.’ 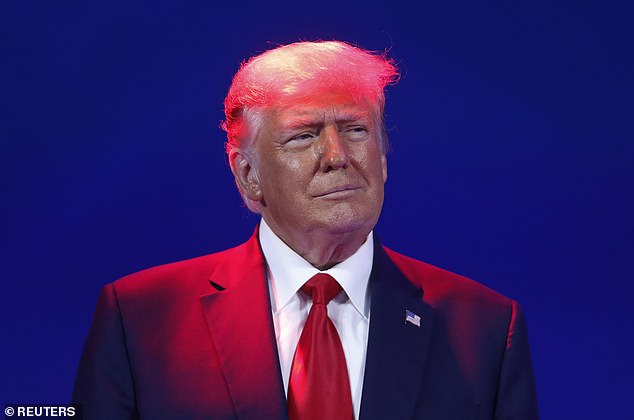 He told the crowd that he had received many unsolicited ballots, as had many of people that he knew.

‘As a citizen of the United States, I think I’m allowed to vote, once, once. Not two times, or three times, or ten times,’ Unanue said.

‘But we still have faith that the majority of people in the United States voted for President Trump.’

According to the official data, Biden won 51.3 percent of the popular vote, the highest proportion won by any challenger to an incumbent president since 1931.

Unanue continued his speech by setting out how he believed the far left, like Alexandria Ocasio-Cortez, had seized control of the White House.

But he claimed that Americans could return to unity if they put their faith in God.

‘In communism the few control the many, and that’s what is happening in our country,’ Unanue told CPAC.

He claimed that Trump’s political opponents had ‘weaponized’ the pandemic during the election year and since taking power are seeking to ‘kill our spirit.’

Unanue said: ‘They seek to destroy our reason to get up in the morning: God, family, work. Seek to cancel God.’

Trump was hailed as returning hero later that evening when he took the stage for the first time since he left office at the end of January.

‘Do you miss me yet?’ The former president said as his old rally soundtrack boomed out.

He blasted his successor and spoke of a future with him firmly at the helm of the GOP. 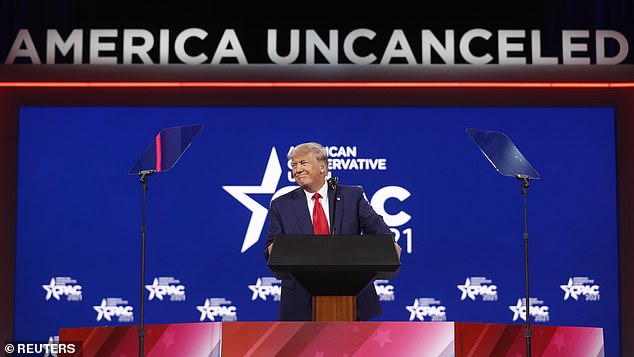 ‘Do you miss me yet?’ Trump asked, as he teased with hints that he would be launching a bid for the White House in 2024 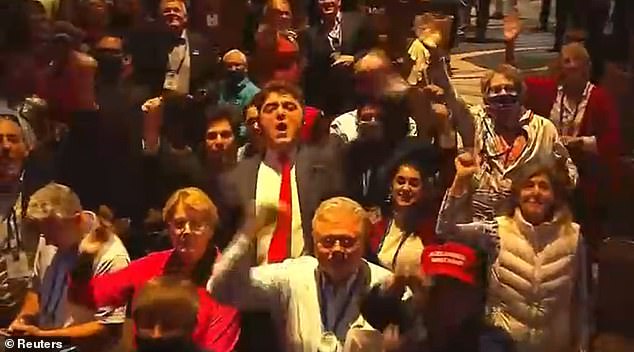 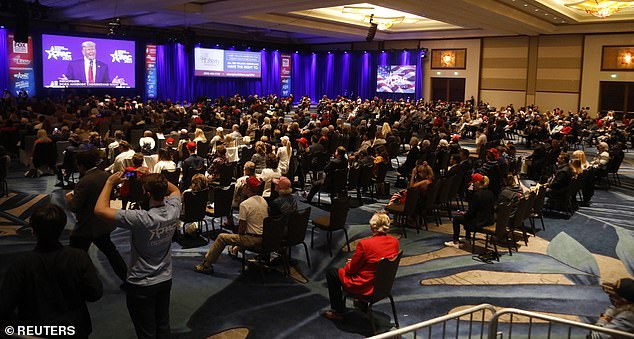 In his speech, he tried to downplay the civil war gripping the party over the extent to which Republicans should embrace him, even as he unfurled an enemies list, calling out by name the 10 House Republicans and seven GOP senators who voted to impeach or convict him for inciting the U.S. Capitol riot.

He ended by singling out Rep. Liz Cheney, the No. 3 House Republican, who has faced tremendous backlash in Wyoming for saying Trump should no longer play a role in the party or headline the event.

While he insisted the division was merely a spat ‘between a handful of Washington, D.C., establishment political hacks and everybody else, all over the country,’ Trump had a message for the incumbents who had dared to cross him: ‘Get rid of ’em all.’ 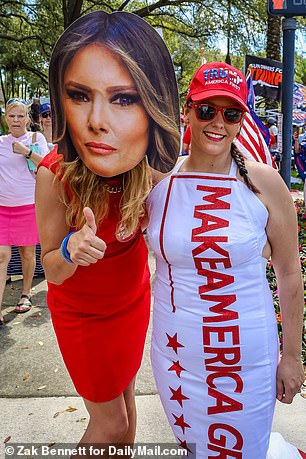 A Trump supporter wears a giant Melania Trump head as they gather outside the Hyatt Regency in Orlando, Florida where the ex-president is due to speak in front of the CPAC crowd

The conference, held this year in Orlando instead of the Washington suburbs to evade COVID-19 restrictions, was a celebration of Trump and Trumpism.

Speakers, including many potential 2024 hopefuls, argued that the party must embrace the former president and his followers, even after the deadly riot at the Capitol on January 6.

They also repeated in panel after panel his unfounded claims that he lost reelection only because of mass voter fraud, even though such claims have been rejected by judges, Republican state officials and Trump’s own administration.

Trump, too, continued to repeat what Democrats have dubbed the ‘big lie,’ calling the election ‘rigged’ and insisting that he won in November, even though he lost by more than 7 million votes.

‘As you know, they just lost the White House,’ he said of Biden, rewriting history.

It is highly unusual for past American presidents to publicly criticize their successors in the months after leaving office.

Ex-presidents typically step out of the spotlight for at least a while: Barack Obama was famously seen kitesurfing on vacation after he departed, while George W. Bush said he believed Obama ‘deserves my silence’ and took up painting.

Trump delivered a sharp rebuke of what he framed as the new administration’s first month of failures, especially Biden’s approach to immigration and the border.

‘Joe Biden has had the most disastrous first month of any president in modern history,’ Trump said.

‘We’ll see what he says, but our focus is certainly not on what President Trump is saying at CPAC,’ she told reporters. 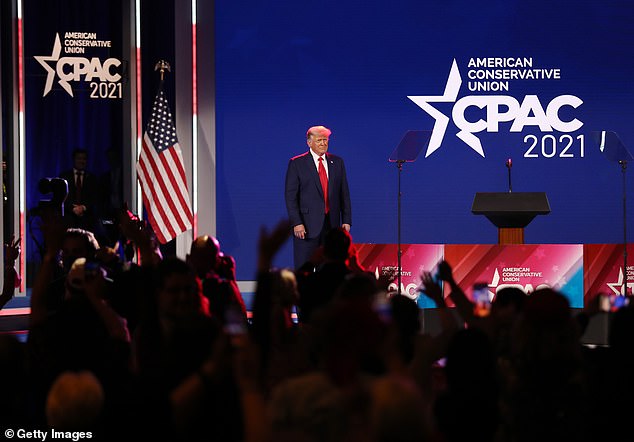 Trump took the stage to the song ‘God Bless The U.S.A.’, which was the warm up song he used during his rallies 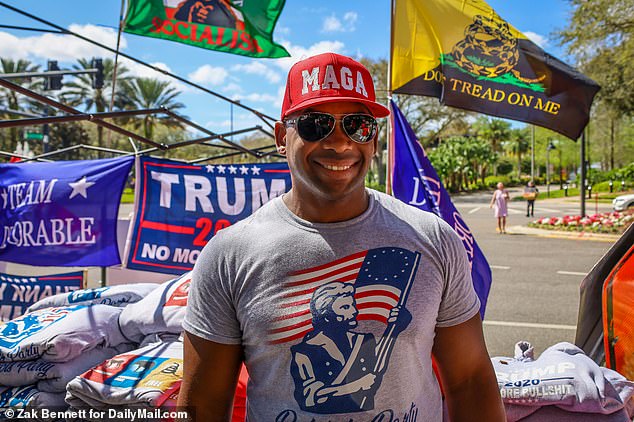 Guy Harper, of Virginia, sells Trump and anti-socialism swag ahead of former President Donald Trump’s arrival at CPAC 2021 at the Hyatt Regency in Orlando

Aside from criticizing Biden, Trump used the speech to crown himself the future of the Republican Party, even as many leaders argue they must move in a new, less divisive direction after Republicans lost not just the White House, but both chambers of Congress.

Though Trump has flirted with the the idea of creating a third party, he pledged Sunday to remain part of ‘our beloved’ GOP.

‘I’m going to continue to fight right by your side. We’re not starting new parties,’ he said. ‘We have the Republican Party. It’s going to be strong and united like never before.’

Yet Trump spent much of the speech lashing out at those he has deemed insufficiently loyal and dubbed ‘RINOs’ – Republican in name only – for failing to stand with him.

‘We cannot have leaders who show more passion for condemning their fellow Americans than they have ever shown for standing up to Democrats, the media and the radicals who want to turn America into a socialist country,’ Trump said.

Trump did not use his speech to announce plans to run again, but he repeatedly teased the prospect as he predicted a Republican would win back the White House in 2024.

CHRISTOPHER STEVENS reviews the opening to the third season of SUCCESSION 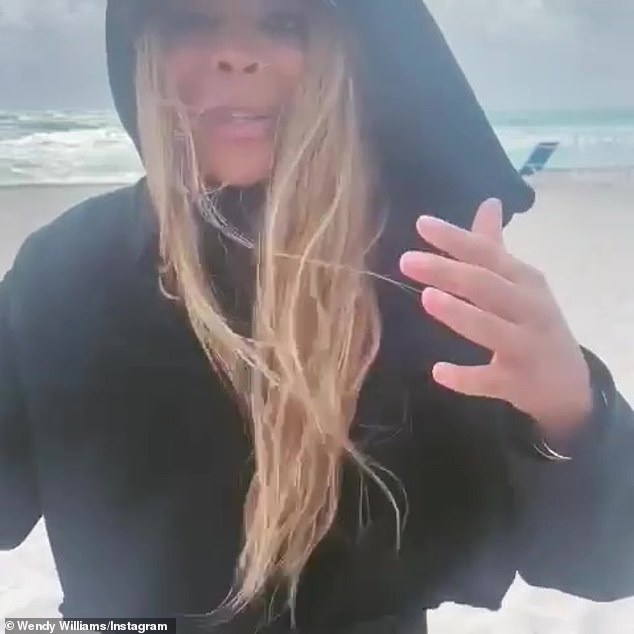 The Wendy Williams Show to be officially CANCELED in June 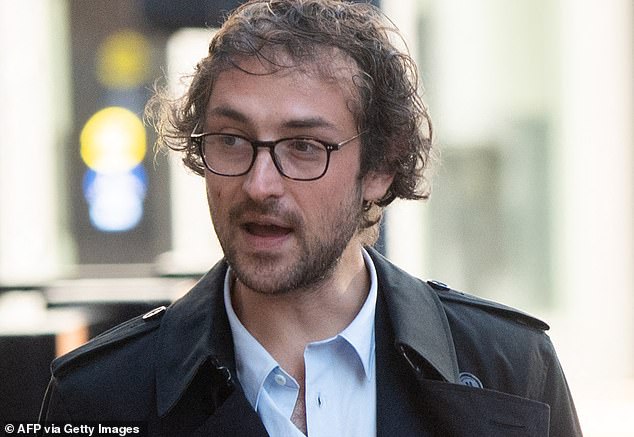 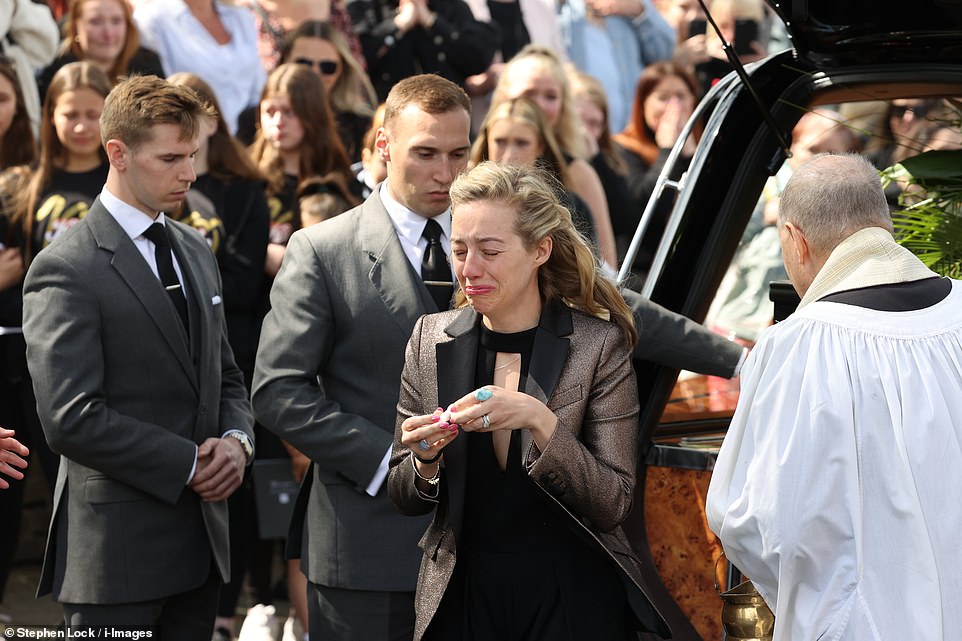 Tom Parker’s funeral: Hundreds of fans line the streets as The Wanted star is laid to rest