A second Georgetown Law professor has left the prestigious university after he participated in a Zoom call where his colleague made derogatory remarks about black students.

David Batson was placed on administrative leave pending an investigation into his conversation with Professor Sandra Sellers that went viral last week.

On Saturday Georgetown confirmed to WTOP that Batson had submitted his resignation to the dean of the university’s law school, Bill Treanor.

Sellers, 62, was fired after video showed her complaining to Batson about how black students were predominantly at the bottom of her class – while Batson stayed quiet.

The interaction happened at the conclusion of a negotiations class around February 21, which was being recorded so that students could watch it later, according to the Washington Post.

The professors had stayed on Zoom to discuss the students after they left and where unaware that it was still recording. It was online for two weeks until students noticed the conversation between Sellers and Batson at the end and reported it to the school on March 8.

Professor David Batson resigned from Georgetown Law after he participated in a Zoom call where his colleague made derogatory remarks about black students. Batson is pictured during the call with Professor Sandra Sellers that went viral last week 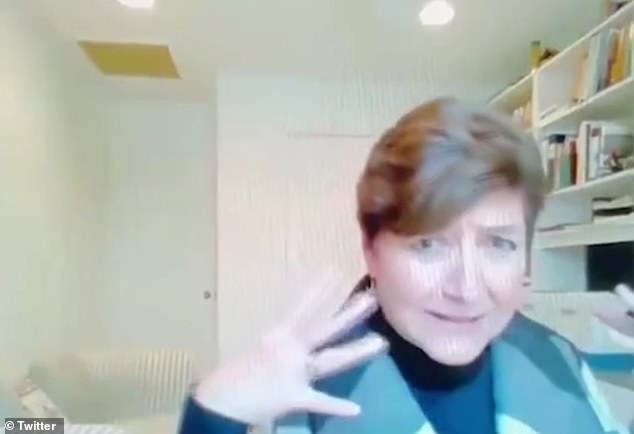 Batson was placed on administrative leave pending an investigation into his conversation with Sellers (pictured), who complained about how black students were predominantly at the bottom of her class 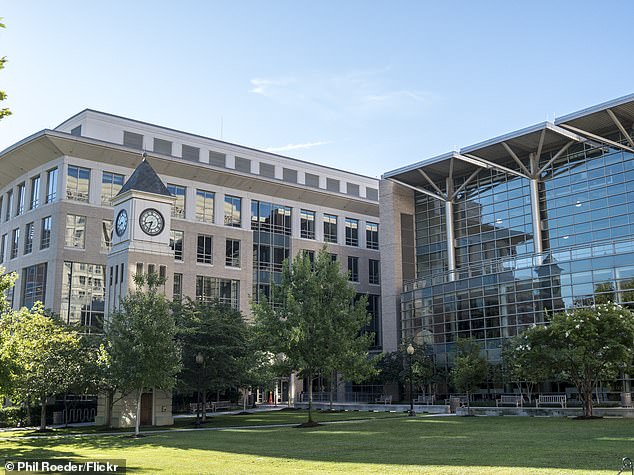 Georgetown Law launched an investigation into the video and Sellers’ comments

‘They were a bit jumbled. It’s like let me reason through that, what you just said,’ Sellers said of a student’s performance, who the Black Law Students Association claims is the only black person in the class.

‘You know what? I hate to say this, I end up having this angst every semester, that a lot of my lower ones are blacks,’ the adjunct professor of mediation and negotiation continued.

‘It happens almost every semester, and it’s like, oh, come on. You know, we get some really good ones but there also usually some of them that are just plain at the bottom,’ Sellers concluded.

Batson, also a mediation law expert, did not initially respond but simply looked down and nodded in the short 43-second clip, which was allegedly leaked to social media by a student.

He subsequently returns to discussing the student in question, stating: ‘What drives me crazy is…the concept of how that plays out in whether that is my own perceptions playing in here with certain people’ or ‘my own unconscious biases playing out in the scheme of things’.

The school – which boasts Tiffany Trump among its high profile alumni – was immediately called on to act as the video of the interaction spread.

Dean Treanor said Thursday that Sellers told him she had intended to resign when they met to discuss what he branded as the ‘reprehensible statements concerning the evaluation of Black students’.

She also issued a statement to the Post on Thursday in which she apologized for the ‘hurtful and misdirected remarks’.

‘I would never do anything to intentionally hurt my students or Georgetown Law and wish I could take back my words,’ Sellers said in the resignation letter.

‘Regardless of my intent, I have done irreparable harm and I am truly sorry for this.’

Batson also apologized in his resignation letter to Treanor.

‘I am deeply saddened by the disturbing situation caused by the recorded Zoom conversation between Ms. Sellers and myself in which insensitive remarks were made regarding the performance of Black students at the Georgetown University Law Center,’ he wrote.

‘The sentiments and opinions expressed during the conversation are not mine, and do not characterize my experience with Georgetown students.’ 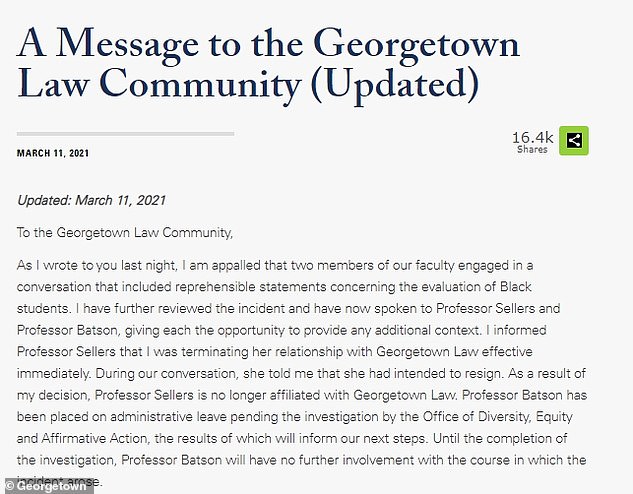 Professor Sandra Sellers: Intellectual property and high tech dispute expert who has served as a Director of the International Trademark Association 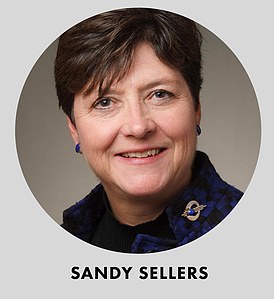 According to her bio on the American Bar Association, she mediates intellectual property, domain name, software, contract, and other business disputes and is President of Technology Mediation Services in Virginia.

She has served as a Director of the International Trademark Association, and chair of its ADR Committee.

Sellers is also a member of the panels of neutrals of US District Court for the District of Columbia, the US International Trade Commission, International Trademark Association, the World Intellectual Property Organization (WIPO) Arbitration and Mediation Center; and other local panels.

The Zoom call was posted to online database Panopto, where students, who have been attending classes virtually because of the pandemic, can access the recordings.

According to Hassan Ahmad, who is on the school’s admission committee, it was discovered on Panopto by one of the students in the professors’ negotiation class.

It is not known if it was the student being discussed in the conversation.

Part of the conversation was recorded from Panopto by a student and was shared on social media before its removal.

It is not clear if the student who first identified the controversial recording was the same person to share the video further online.

The Black Law Student Association had been among the groups calling for Sellers’ resignation and an apology from Batson.

The group issued a statement on Wednesday in which they claimed that the recorded conversation is proof of Sellers’ bias in her grading of black students.

The school also issued a statement on Wednesday after the video went viral but initially did not name the professors involved.

‘We learned earlier this week that two members of our faculty engaged in a conversation that included reprehensible statements concerning the evaluation of Black students,’ Treanor said as he promised a full investigation into the video.

‘We are responding with the utmost seriousness to this situation. I have watched a video of this conversation and find the content to be abhorrent.

‘It includes conduct that has no place in our educational community. We must ensure that all students are treated fairly and evaluated on their merits.’ 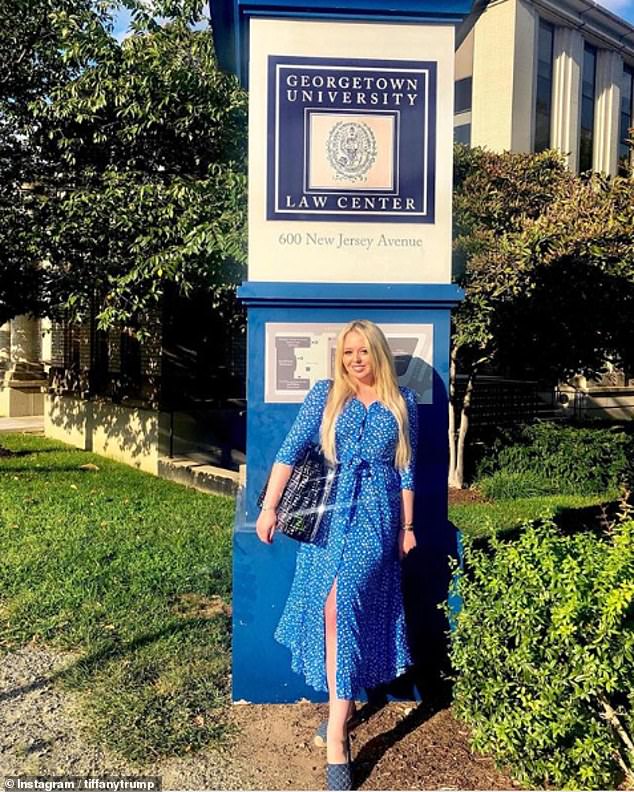 Treanor issued an update on Thursday in which he confirmed that ‘Sellers is no longer affiliated with Georgetown Law’.

Batson will remain on leave until the investigation by the Office of Diversity, Equity and Affirmative Action is complete.

‘Until the completion of the investigation, Professor Batson will have no further involvement with the course in which the incident arose,’ Treanor said.

‘This is by no means the end of our work to address the many structural issues of racism reflected in this painful incident, including explicit and implicit bias, bystander responsibility, and the need for more comprehensive anti-bias training,’ the Dean continued.

‘This is a matter of great concern to me. I will be writing to you soon with a range of actions and changes that we will implement to address these issues.’ 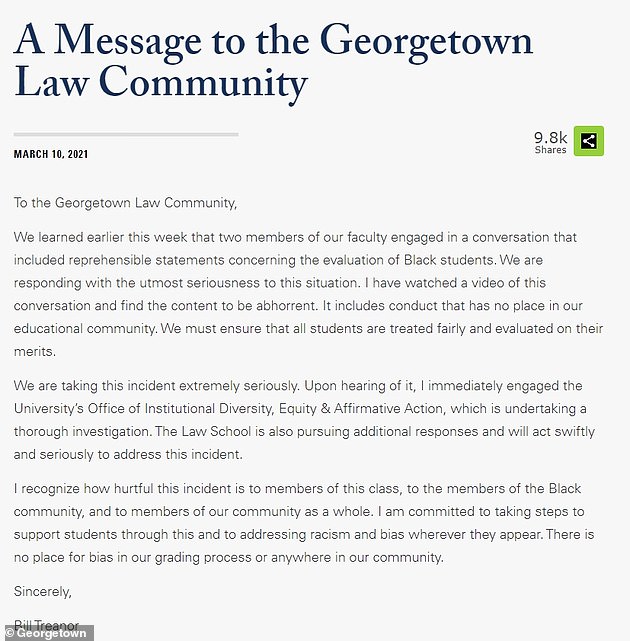 The BLSA had claimed that the immediate termination of Sellers was the only option for the controversy.

‘We demand nothing short of the immediate termination of Sandra Sellers as adjunct professor at Georgetown University Law Center. Not suspension. Not an investigation. The University must take swift and definitive action in the face of blatant and shameless racism,’ it said.

‘Not only is this situation revealing of Sellers’ true beliefs about Black students, it is also illustrative of the conscious and unconscious bias systemically present in law school grading at Georgetown Law and in law school classrooms nationwide. The difference is that Sellers was caught, and her racism was broadcast for the world to see.’

The association also called for an apology from Batson for failing to condemn Sellers after she made the comments, a review of Sellers’ past grading, and a commitment to hiring more black professors.

It said that Batson’s comments showed more awareness but that ‘his actions were still altogether insufficient to address the blatant racism that he was an audience to’.

‘He had an obligation to report her, and he did not. We demand that Batson publicly apologize for his role in enabling and supporting Sellers’ behavior,’ the group added.

‘The despicable sentiments of these #GeorgetownLaw professors are most certainly felt by their Black students,’ wrote Janai Nelson from the NAACP Legal Defense & Educational Fund.

Some social media users accuse Sellers of bias in her work

Others criticized Batson for not responding to the statements

Their statement was supported by other BLSA chapters from universities around the country and by other minority law groups within Georgetown, as well as being signed by hundreds of students and alumni.

Georgetown Law alumni were also among those who hit out at the video on social media.

‘I graduated from @GeorgetownLaw in 2004. How is this being addressed?’ another wrote on Twitter.

‘This will definitely have bearing on my decisions when Student Giving calls me asking for money. I’m also rethinking my decision to assist with admissions interviews. I’ve got questions.’

Other social media users claimed that it showed Sellers’s bias in her classes.

‘Narrator: ‘She didn’t hate to say it,’ one commenter joked.

‘The despicable sentiments of these #GeorgetownLaw professors are most certainly felt by their Black students,’ wrote Janai Nelson, Associate Director-Counsel of NAACP Legal Defense & Educational Fund.

‘Blk ppl know when we are under-estimated, stereotyped & mocked even when the mask is up. That we still succeed in these environments is a testament to pure grit and will.’

And other commenters had criticism for Batson.

‘Watch how the other professor just sits idly, offering no rebuke, content to let the lady’s racism stand. A wasted Batson challenge if I’ve ever seen one,’ wrote civil rights lawyer Angelo Guisado. 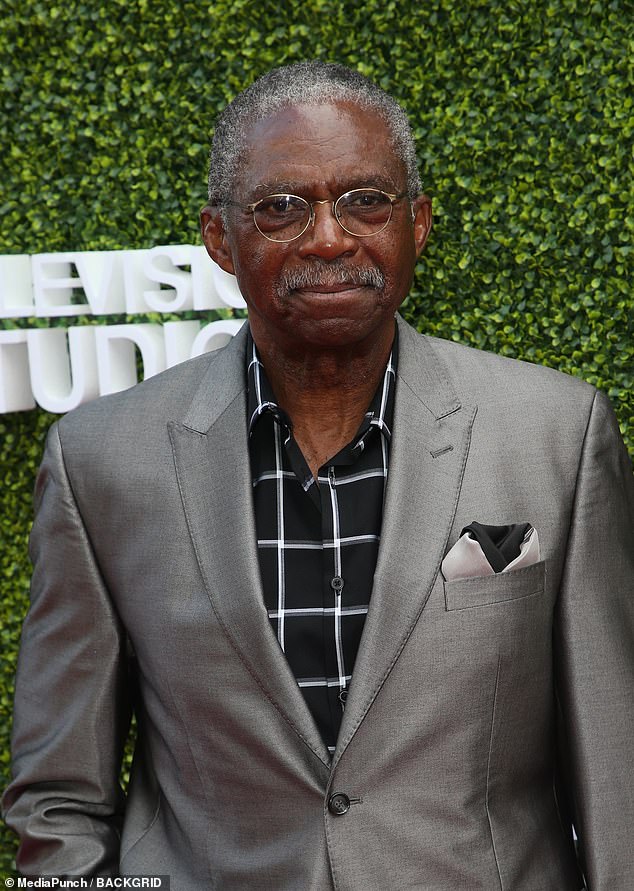 Charlie Robinson, who was featured on Night Court for eight seasons, dies at 75 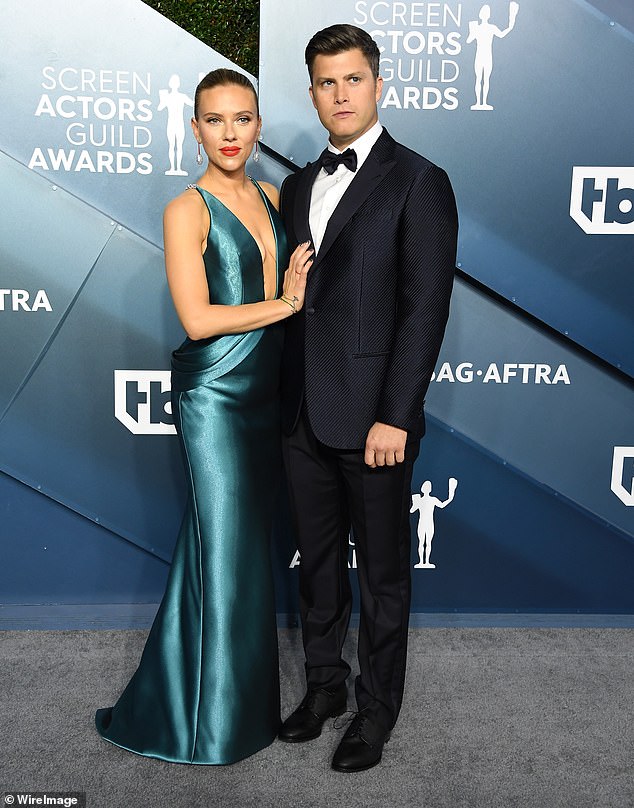 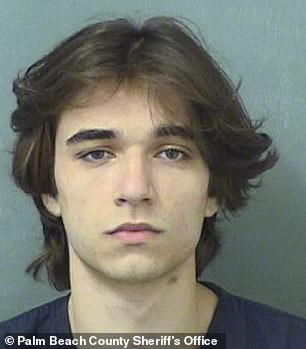 Florida teen, 19, ‘shoots and kills man in Starbucks drive-thru after being confronted’

May 1, 2021
Check Also
Close
Recent Stories
Featured Posts
German husband kills himself, his wife and their three young girls after he faked jab certificate
6 mins ago

Sex and the City: How much would Carrie Bradshaw’s NYC apartment cost today?
58 mins ago