A funeral truck circled a football stadium in Charlotte during Sunday’s Panthers v. Saints game with a simple message: ‘Don’t get vaccinated.’

At first glance, the anti-vax directive appeared to be sponsored by the Wilmore Funeral Home. It drew attention on social media as a clever, if dark, ad campaign for future memorial services for those who might end up needing them.

A website for the funeral home on the stark ad goes even further: ‘If not, see you soon,’ it reads, with a click-through link to a clinic offering COVID-19 vaccines.

‘This truck is making laps around Bank of America Stadium before the Panthers game in Charlotte,’ a puzzled Twitter user wrote Sunday at 11.23am.

‘Is it sponsored by a damn funeral home? Wow,’ someone replied shortly after.

The truck and the website, as it turns out, are part of an elaborate pro-vaccine stunt by the Boone Oakley ad agency in Charlotte.

A truck purporting to be from the Wilmore Funeral Home told people, ‘Don’t get vaccinated’ 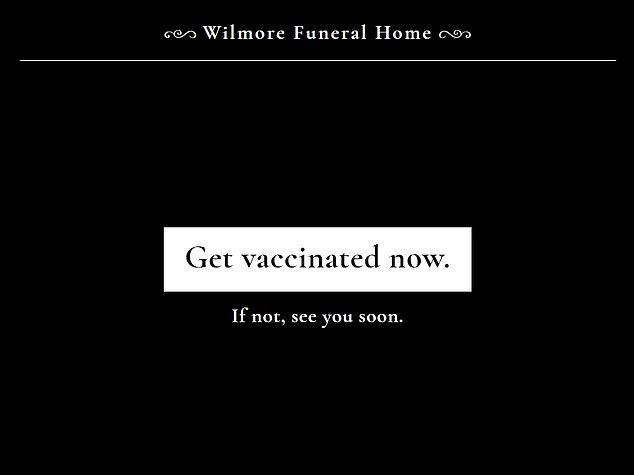 The funeral home’s website ominously warns, ‘If not, see you soon,’ in a link to a vaccine clinic 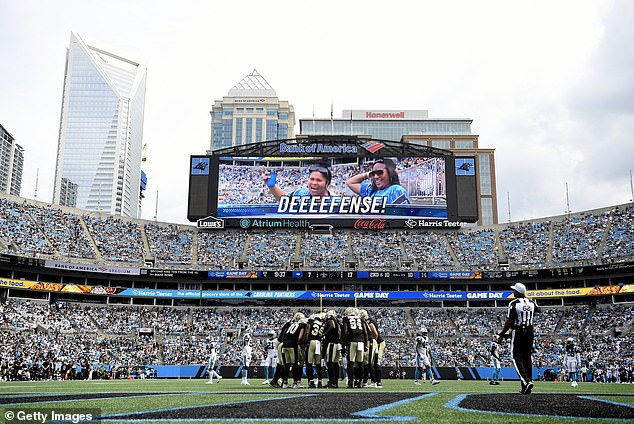 ‘Almost everyone here got their vaccines at StarMed,’ agency president David Oakley told Newsweek about the clinic featured on the fictional funeral home’s website.

‘A lot of pro-vaccine advertising is very straightforward,’ he added.

‘We thought, ‘Is there a way to turn it around and do it from a different perspective?”

After devising a strategy, they reached out to Crenshaw Visions in South Carolina to buy the mobile billboard, which drove around the Bank of America stadium in uptown Charlotte. 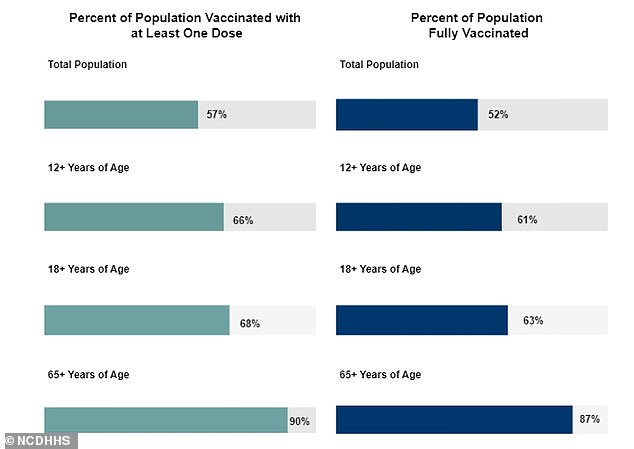 Only 52 percent of North Carolinians are fully vaxxed, slightly below the US average of 54.8 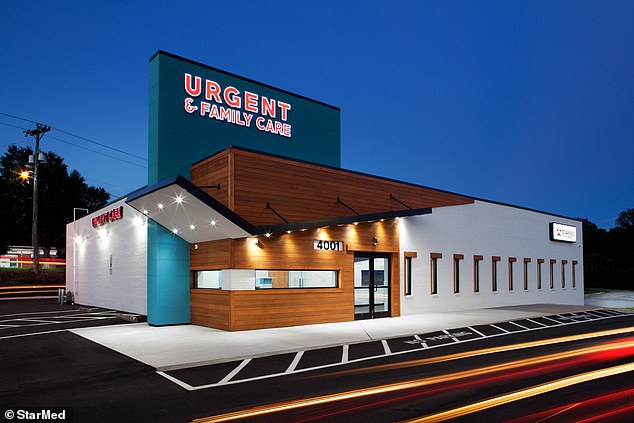 In North Carolina, only 52 percent of the total population is fully vaccinated, slightly below the national average of 54.8 percent, according to data from the North Carolina Department of Health and Human Services and the Centers for Disease Control and Prevention.

Ninety percent of NC adults aged 65 and older have at least one dose.

The US is already falling behind other wealthy nations in terms of COVID-19 protection.

There were 3,257 cases of COVID-19 reported across North Carolina on Monday, down from a high of 11,337 on September 11 – the third-highest daily number of cases since the pandemic began as the more contagious Delta variant rages on. 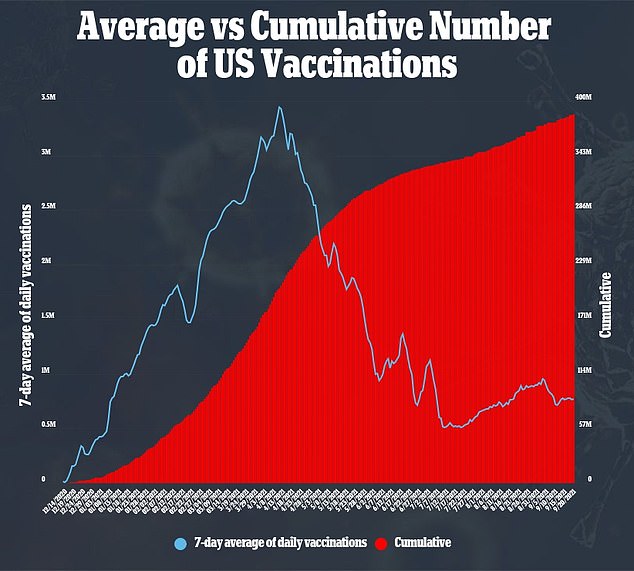 The US is stuck at a full vaccination rate of 54.8 percent, less than that of Canada and the UK 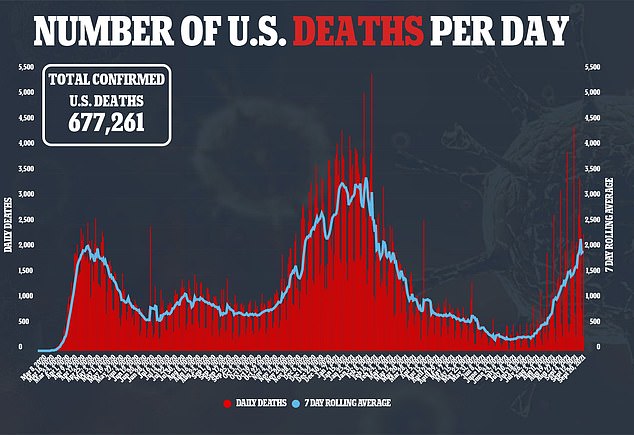 Deaths are rising in what many, including President Joe Biden, call a ‘pandemic of the unvaccinated’

The StarMed clinic had no part in Sunday’s fake ad.

‘If this saves one person’s life by getting vaccinated, I’m 100 percent for it,’ the clinic’s chief medical officer, Dr. Arin Piramzadian, told the Charlotte Observer.

‘We know that 99 percent of people who are ending up in the hospital and dying are unvaccinated,’ said Piramzadian, who came across a photo of the truck on Facebook Monday morning.

‘If that statistic does not scare people … I’m not sure what does. Perhaps a dark humor aspect such as this one does catch someone’s attention.’

MAFS NZ: Samuel Levi boasts about getting an 'illegal haircut' in lockdown 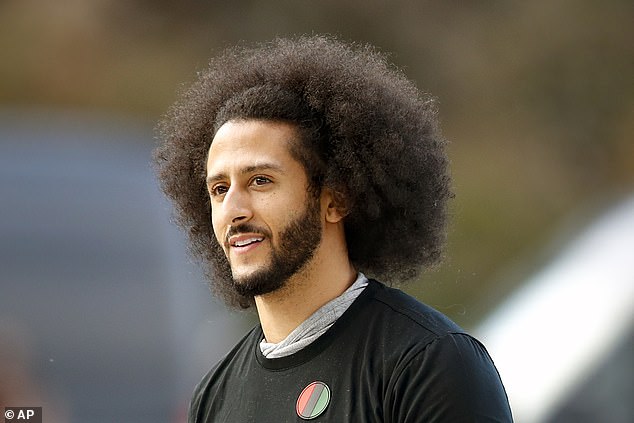 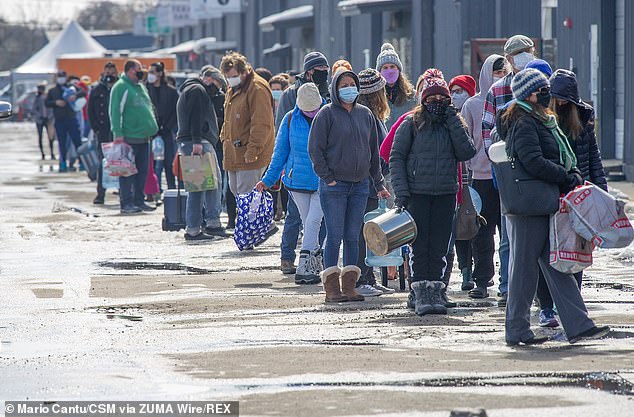 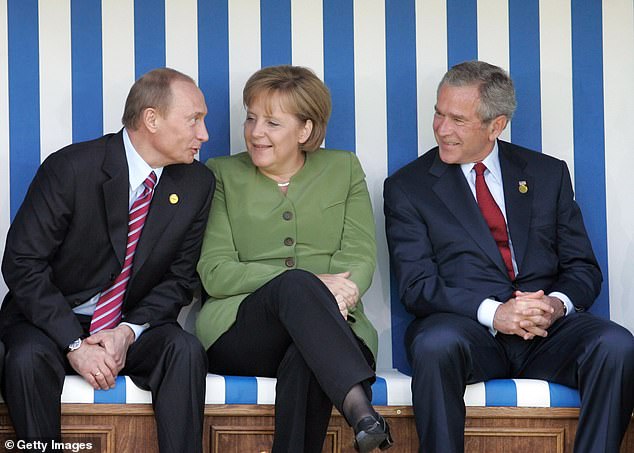 How Germany’s greed for gas, and another grubby deal with Moscow, could plunge Europe into an abyss

November 25, 2021
Check Also
Close
Recent Stories
Featured Posts
The Excitement of the Casino, the Tension of a TV Game Show
26 mins ago