The world shut itself off from Southern Africa today in response to a super mutant variant that was unheard of just days ago.

B.1.1.529 — which has now been named Omicron— was first picked up in Hong Kong on Monday in a patient who had travelled from South Africa.

It did not catch international attention until Wednesday after a British scientists mentioned its 32 ‘horrific’ mutations on social media after cases were picked up in Botswana and South Africa as well.

Boris Johnson’s spokesperson said the variant was not an ‘issue’ on Wednesday afternoon despite UK experts warning it had a horrific set of mutations that could allow it to dodge vaccines.

By Thursday the South African Government was forced to warn the world about the strain at a sombre press conference, admitting it had triggered an ‘exponential’ rise in Guateng province and was likely in every corner of the country, outpacing Delta at ferocious speed.

The UK Health and Security Agency (UKHSA) said it was monitoring the situation closely but that it did not pose a threat to the UK at the time. Chris Whitty and other prominent experts warned of a potential global outbreak that could undermine the UK’s vaccine programme.

Journalists were briefed on Thursday night by senior scientists at a hastily organised briefing where they were told the variant was at least 40 per cent more vaccine evasive than Delta.

The media was told the strain was the worst seen ‘ever’ and that the variant could be at least 40 per cent more vaccine evasive.

At the same time, an emergency Covid committee cabinet meeting convened to discuss Britain’s next steps to deal with the variant.

It prompted a rapid announcement from Health Secretary Sajid Javid last night that there would be a travel ban on six African countries in the south of the continent.

And scientists hit the airwaves this morning to warn of the potential return of draconian Covid restrictions this winter because of the strain.

New cases were picked up in Israel and then Belgium and European countries began shutting off their borders to people coming in from South Africa, with passengers unable to leave a plane in Amsterdam, the Netherlands. 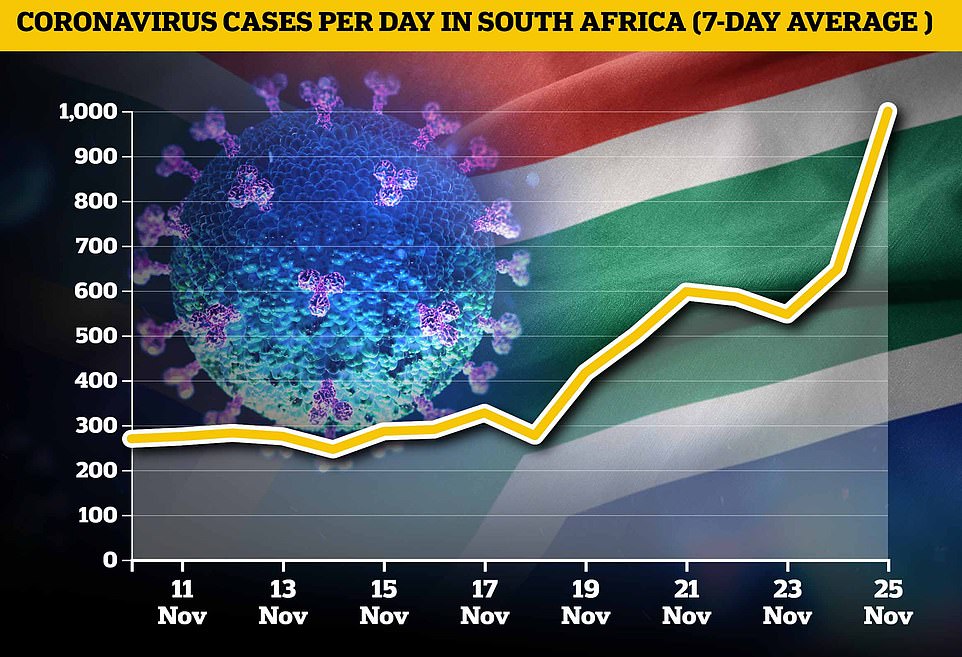 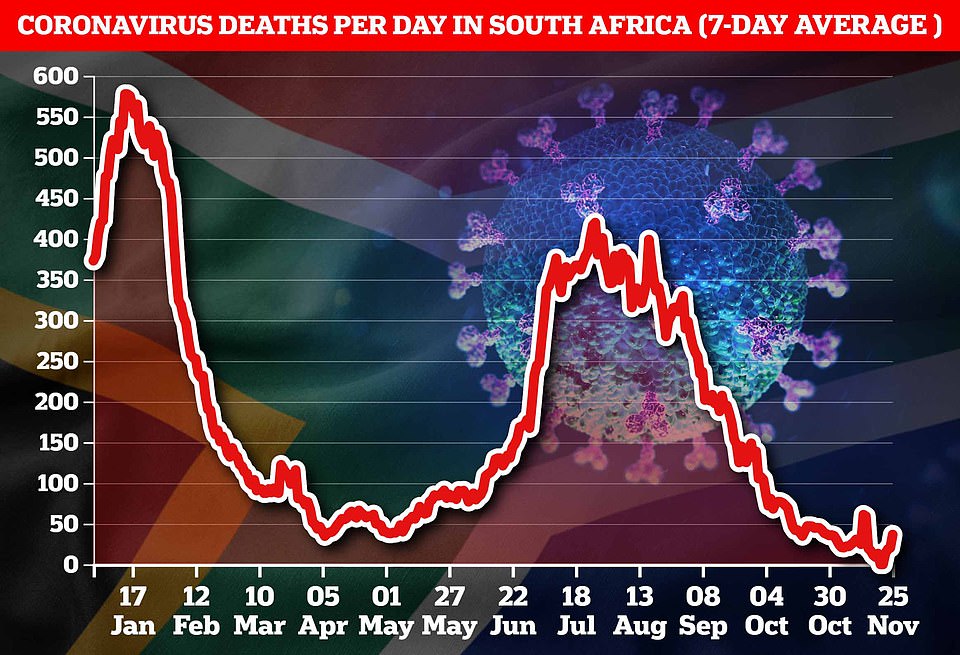 Researchers in Hong Kong were the first to raise the alarm about the new strain on Monday after discovering the strain in two passengers who had recently returned from South Africa.

It was also picked up in Botswana, where it was sequenced three times, and South Africa — who had only seen one case at the time.

Scientists from all three countries uploaded it to an international database of variants used by experts from across the world, including the UK.

Dr Tom Peacock, a British virologist at Imperial College London who works with the UK Health Security Agency (UKHSA), voiced concern about the strain’s 32 ‘horrific’ mutations — twice as many as Delta — on Tuesday. 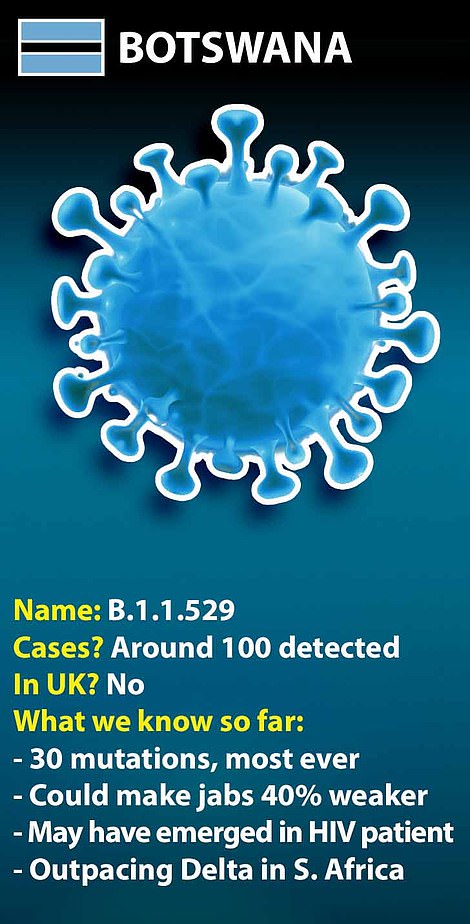 MailOnline broke the news about the variant on Wednesday, before No10’s official spokesperson shrugged it off as ‘not seen as something that is an issue’ despite experts’ fears that it would be more vaccine evasive than Delta.

Some scientists dismissed fears, saying the strain’s large amount of mutations meant it could become unstable — meaning it would be unlikely to become widespread.

But others warned if it started taking over the dominant Delta variant in South Africa it could have knock-on effects for the rest of the world.

Professor Francois Balloux, a geneticist at University College London, said it likely emerged in a lingering infection in an immunocompromised patient, possibly someone with undiagnosed AIDS.

He said it was likely the variant would be much more able to dodge antibodies than Delta.

Professor Balloux told MailOnline: ‘For the time being, it should be closely monitored. But there’s no need to be overly concerned, unless it starts going up in frequency.’

Behind the scenes, MailOnline understands there were ‘extensive talks’ between British Government scientists and those in South Africa on Wednesday and Thursday.

Cases began to grow exponentially in the Guateng Province in South Africa on Thursday, with a particular spike in Johannesburg, where they shot up 93 per cent in a single day.

The South African Government held a press conference on the same day, saying that they are ‘concerned by the jump in evolution in this variant’.

British ministers were called to an emergency meeting of the Covid Operations Cabinet Committee on Thursday, chaired by Cabinet Office minister Steven Barclay, to discuss shutting Britain’s borders to travellers from Africa.

They were told vaccines would be at least 40 per cent less effective against the variant — because of a mutation it shares with the original South African Beta variant — at the meeting.

Health Secretary Sajid Javid attended the meeting but Boris Johnson and Michael Gove, the housing minister, were not part of discussions.

It was set up due to concerns raised by England’s Chief Medical Officer Professor Chris Whitty and UKHSA boss Dr Jenny Harries.

Passengers arriving into the UK on one of the last flights from South Africa have revealed they were not offered tests and left to mix with hundreds of others despite mounting concern over the new variant.

Health Secretary Sajid Javid has announced that flights from South Africa – as well as  Namibia, Lesotho, Botswana, Eswatini and Zimbabwe – will be suspended from midday. They have all been placed on the red list.

But passengers arriving from Johannesburg – the capital of the province of Gauteng where the variant was first identified – were subjected to ‘no additional precautions’, according to one of the people on the flight – one of three arriving at Heathrow before the ban comes into force.

Writer and political commentator Adam Schwarz tweeted: ‘A friend arrived in London this morning on one of the last flights from South Africa. Health officials met the plane, but no additional precautions are being taken for the hundreds of passengers.

‘The captain read out a statement ”advising” self-isolation and further tests. But it’s at the discretion of passengers and it’s not legally enforceable. Passengers then got on the airport shuttle to baggage reclaim, mixing with dozens of other flights. No testing was offered.’

A Government source said: ‘Whitty and the experts said we needed to act. They wanted to get it out as soon as possible.’

Insiders stressed they were acting out of an ‘abundance of caution’. The issue only came on the radar at No10 on Wednesday. ‘We have moved more quickly than with previous decisions,’ one source said.

One senior UK Health Security Agency (UKHSA) expert said: ‘This is the worst variant we have seen so far.’

Experts from the UKHSA have been advising ministers on the issue, with a number of scientists expressing serious concern over the variant due to the significant number of mutations in the spike protein.

One senior scientist said: ‘One of our major worries is this virus spike protein is so dramatically different to the virus spike that was in the original Wuhan strain, and therefore in our vaccines, that it has a great cause of concern.’

Sajid Javid released a video on Twitter on Thursday night at around 8.50pm announcing the Government was banning all flights from South Africa, Namibia, Lesotho, Botswana, Eswatini and Zimbabwe.

Scientists hit the airwaves this morning to warn Britain may have to accept the reintroduction of draconian lockdown restrictions this Christmas as a result of the warning.

Professor Adam Finn, a member of the Joint Committee on Vaccination and Immunisation (JCVI), earlier raised the prospect of lockdown curbs being reintroduced, warning that people must be braced for a ‘change in restrictions’ if the variant spreads to the UK.

She said ‘people are arriving every day’ to the UK from Belgium, South Africa, Botswana, Hong Kong and Israel where the variant has been officially detected.

Belgium’s health ministry said a case was spotted in an unvaccinated young woman who got tested after suffering symptoms. She had returned from Egypt 11 days ago.

Israel has also detected a case in a vaccinated individual, meaning it has now been confirmed in three continents. The Israeli had returned from Malawi. Two other suspected cases are being investigated.

Passengers flying to Holland from South Africa were banned from getting off the plane as the continent tightened its borders in an attempt to shut out the strain.

Flights in and out of Britain from the six African countries were supposed to be scrapped at midday today, despite No10 scrapping the no-fly travel ‘red list’ just weeks ago.

Yet, British arrivals from the variant’s epicentre Johannesburg were left to mingle with hundreds of others as they flew into Heathrow on the last flights out of Africa before the red list was re-imposed at midday. Passengers revealed they were not tested or questioned about their travel history.

Those coming from variant epicentre Johannesburg said they faced ‘no additional precautions’. Others told how they were getting around the ban by flying to other countries and then to the UK.

Ursula von der Leyen called for the EU to pull the ’emergency brake’ on travel from southern Africa on the back of the announcement, warning that the strain could be world-dominant in months.

The EU Commission president said: ‘All air travel to these countries should be suspended until we have a clearer understanding about the danger posed by this new variant. It is now important that all of us in Europe act very swiftly, decisively and united.’ 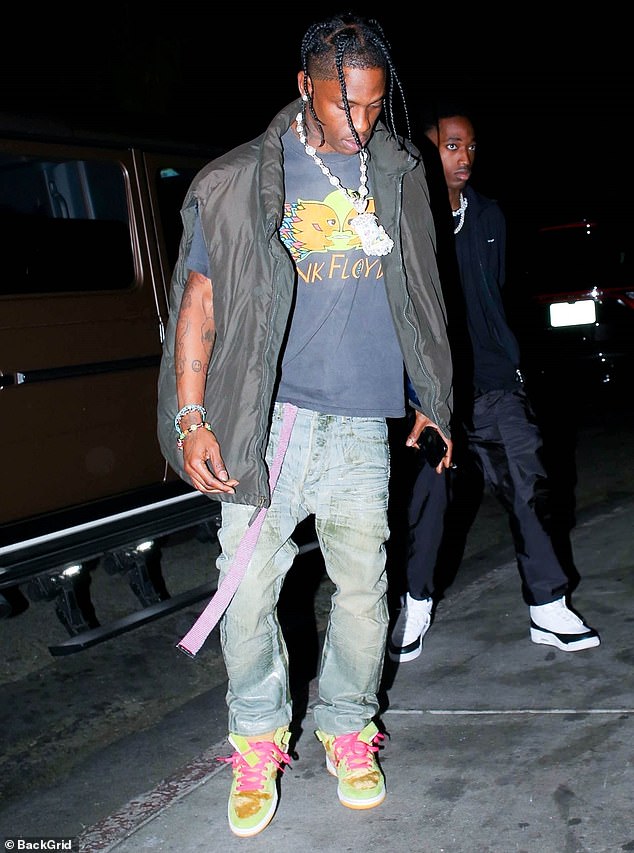 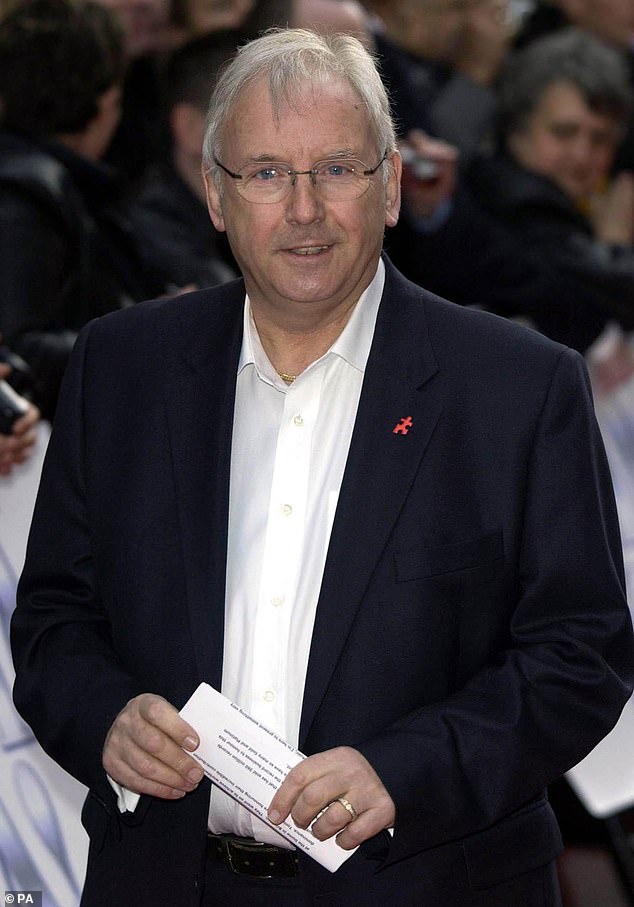 ‘They think they’re bigger than the music’: Pete Waterman explains why Little Mix are finished

South Dakota Attorney General KNEW that he had run over and killed a ma, investigators say
31 mins ago