Scaredy cat! Huge rescue team sent to cat stuck on Florida bridge that proceeds to rescue itself and scurry off when scared by fireman with a net

A cat had Fort Lauderdale abuzz on Wednesday afternoon, dangling on a bridge light fixture before suddenly saving itself as rescuers try to come to its aid.

In video from the scene recorded by Local 10, the black and white cat was sitting on a light fixture hanging off the bridge, approximately 50 feet off the ground. 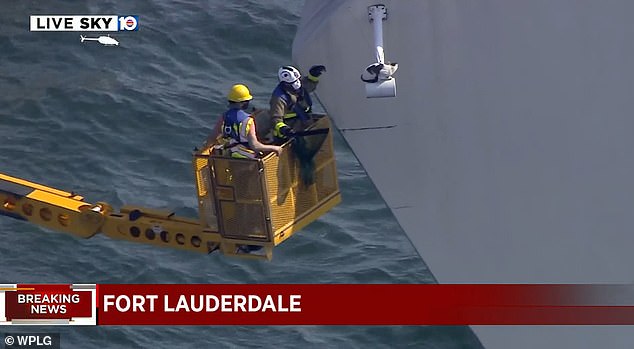 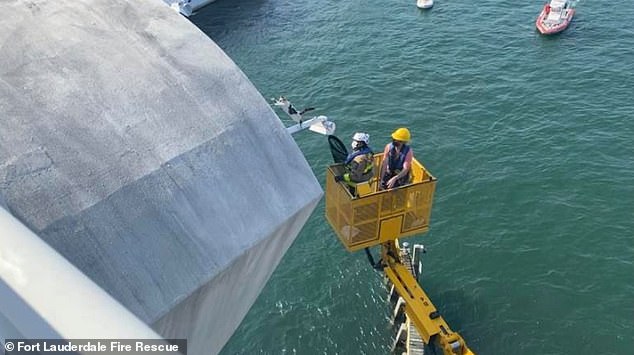 But when they got too close, the cat decided to jump from the fixture back on to the bridge

The call for the Fort Lauderdale Fire Rescue team came in at 2:49pm, leading eight units to respond, with an assist to use a specialized truck from the Florida Department of Transportation.

The cat can be seen looking around at its surroundings while facing back towards the bridge as two rescuers on a mechanical lift approach, one with a net in hand.

As the mechanical lift closes in, the cat suddenly turns towards the horizontal pole holding up the light and runs across it and up another part of the bridge, dodging three more rescuers in the process.

The cat keeps running as it reaches the bridge’s sidewalk, moving past fire trucks and other vehicles related to the rescue.

Finally, the cat stops, then slows down from its former pace as it casually walks along the sidewalk, finally finding a Fort Lauderdale Fire Rescue truck to hide underneath.

The cat isn’t safe yet, though, as the cat gets spooked again and runs across multiple lanes of traffic before sitting on the edge of the other side of the bridge. 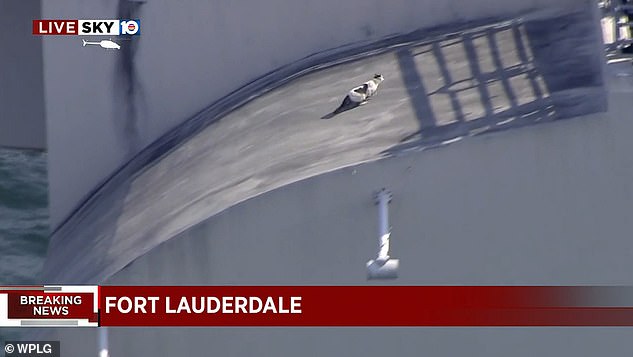 The cat scurries up the bridge, seemingly to safety, but its ordeal is far from over 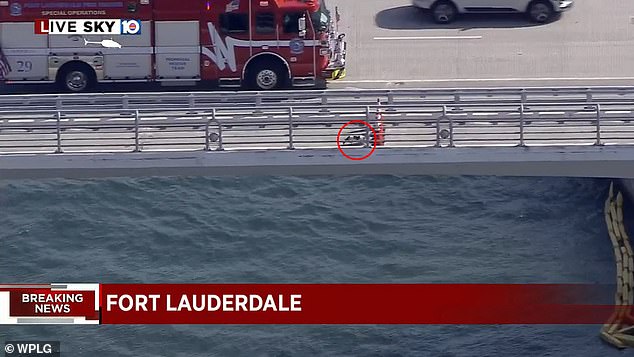 For a time, the cat runs along the sidewalk, then slows down and appears to relax

It begins walking along the edge of the bridge before tucking itself into a hiding place next to a light pole.

Several people on the ground continue filming the cat, though rescuers are staying away, all while traffic hums by.

Just as someone approaches the cat again, however, the news camera pulls out, leaving viewers of live feeds in suspense. 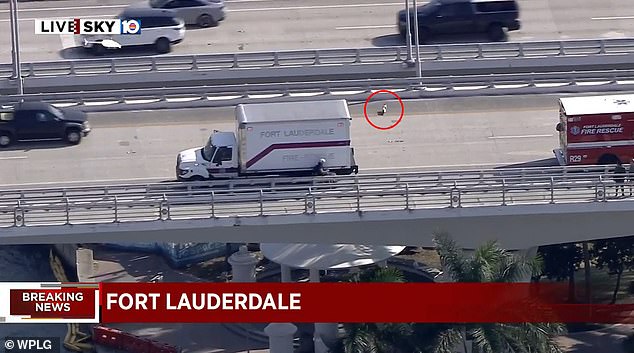 But after hiding underneath a truck, the cat decides to run across traffic to the other side 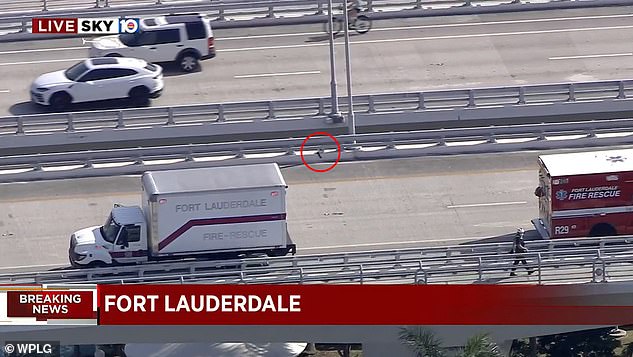 From there, the cat decides to sit on the edge of the bridge, perfectly balancing itself

It’s not clear when the cat first got stuck on the bridge.

Fire rescue chose not to try capturing the cat as it ran across the bridge, as they didn’t want it to jump off the bridge or leap into traffic.

The cat likely belongs to a group of feral cats that live beneath the 17th Street Causeway Bridge, according to NBC Miami.

Ex-convict, 39, 'beat up woman for bringing him a quarter-pounder instead of a Big Mac' 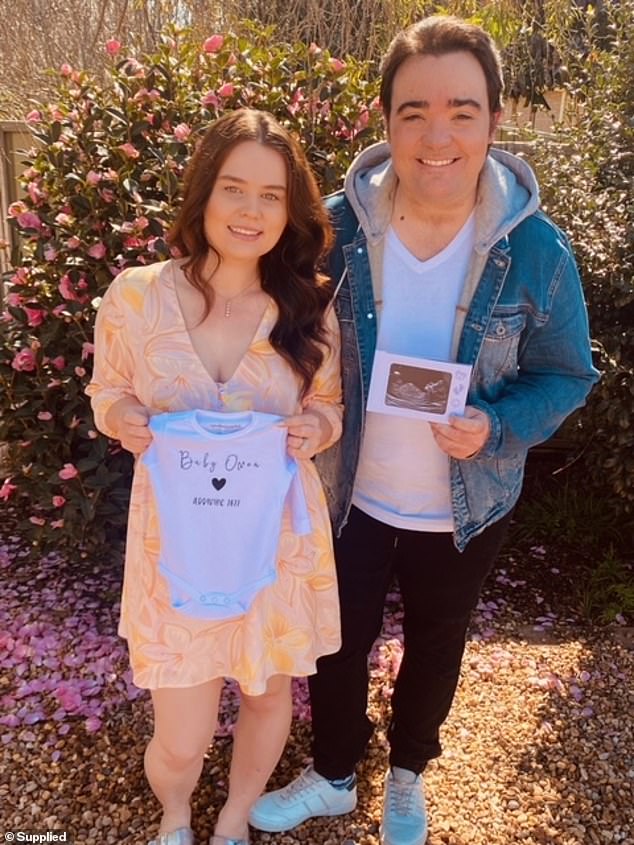 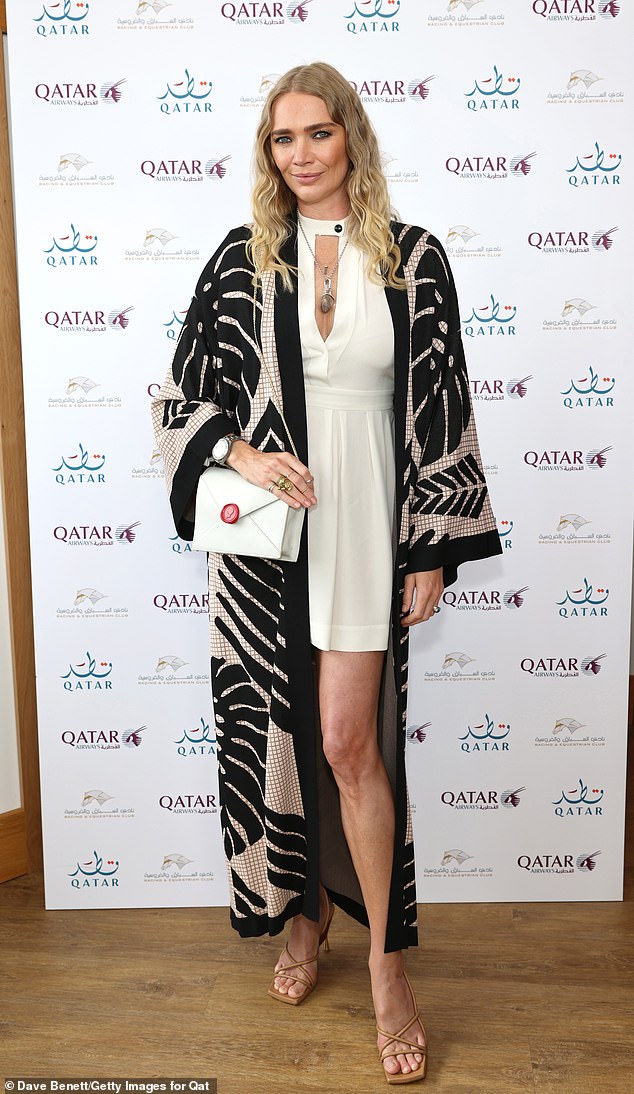 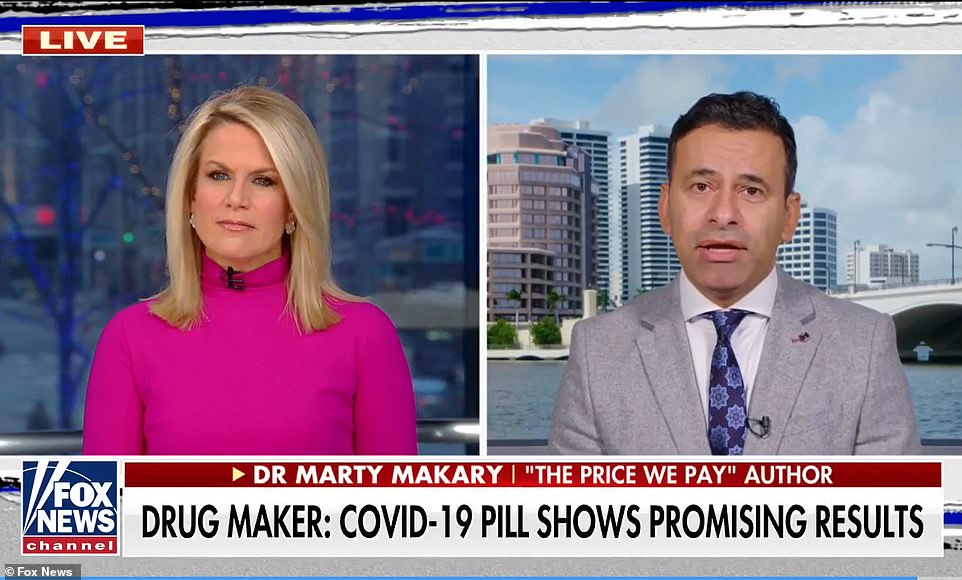 60,000 US troops based in Europe Biden might call into action to defend against Russian aggression
59 mins ago