President Biden’s stumbles as he climbed the stairs to board Air Force One on Friday was given the meme treatment, with Donald Trump Jr posting a video which made it appear that he was knocked down by a golf ball hit by his father.

The former president’s eldest son posted a mock tweet showing Donald Trump swinging a golf club and hitting a ball that knocks Biden down as he ascends toward Air Force One.

Biden tripped on the staircase three times, with Don Jr joking: ‘It wasn’t the wind folks.’

Earlier on Friday, Don Jr blasted a suggestion from a White House spokesperson, Karine Jean-Pierre, who suggested that it was the windy conditions that were to blame for Biden’s stumbling. 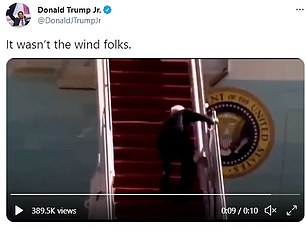 Donald Trump Jr. tweeted this meme joking that it wasn’t the wind that knocked Biden over but a golf ball fired at his head by Trump 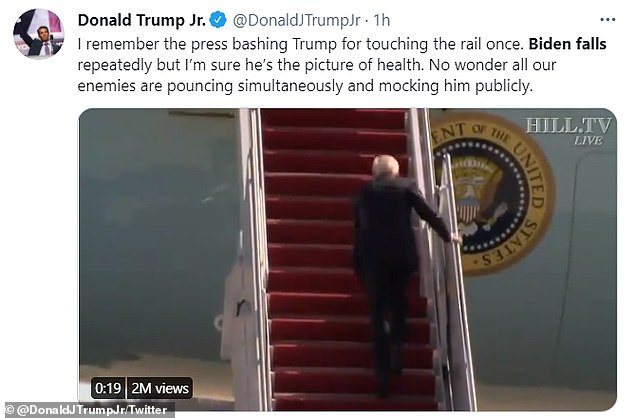 Donald Trump Jr. said it was ‘no wonder’ the US was being attacked by ‘enemies’ Russia and China when Biden’s health is in question 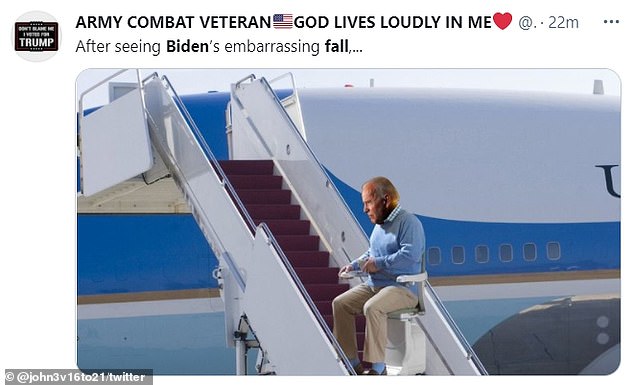 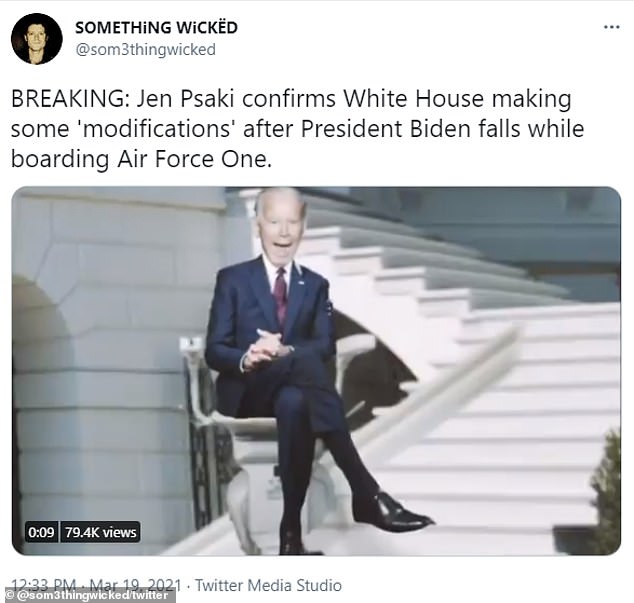 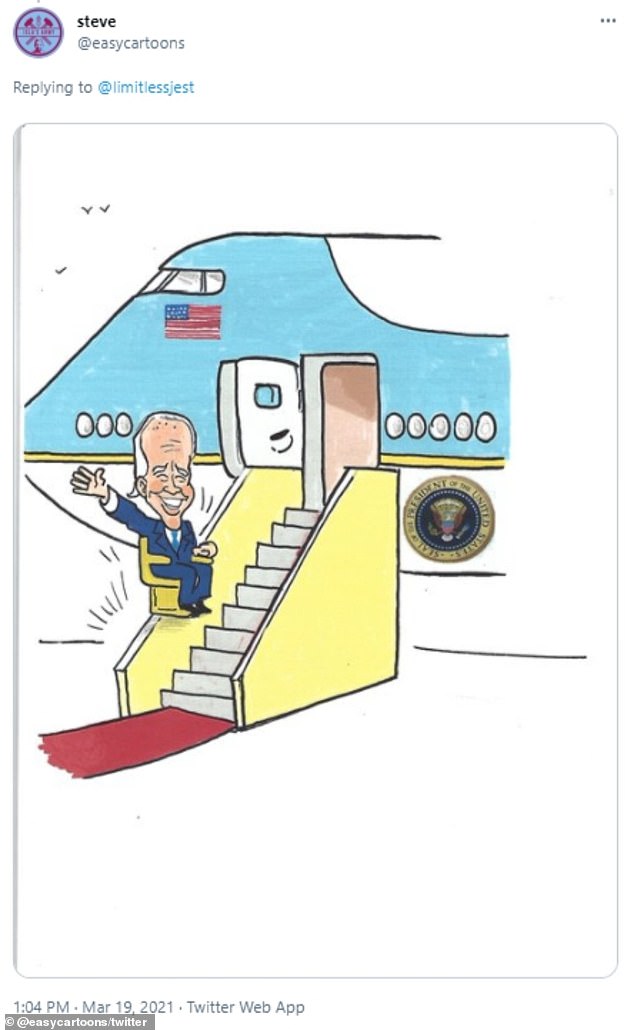 ‘Pay no attention to the fact that the President of the United States is so frail that he got knocked over repeatedly by a gust of wind,’ Don Jr tweeted on Friday.

‘Nothing at all to see here, folks!’

Don Jr also criticized the media, accusing it of giving Biden a pass while scrutinizing the physical state of his father during his time in the White House.

‘I remember the press bashing Trump for touching the rail once,’ Don Jr tweeted.

‘Biden falls repeatedly but I’m sure he’s the picture of health.

‘No wonder all our enemies are pouncing simultaneously and mocking him publicly.’

Others on the internet joked that the 78-year-old Biden would need a stairlift to transport him to the plane from the tarmac.

Kyle Kashuv, the Parkland massacre survivor who has become an advocate for gun rights, posted a meme showing Biden being carried to Air Force One by a stairlift. 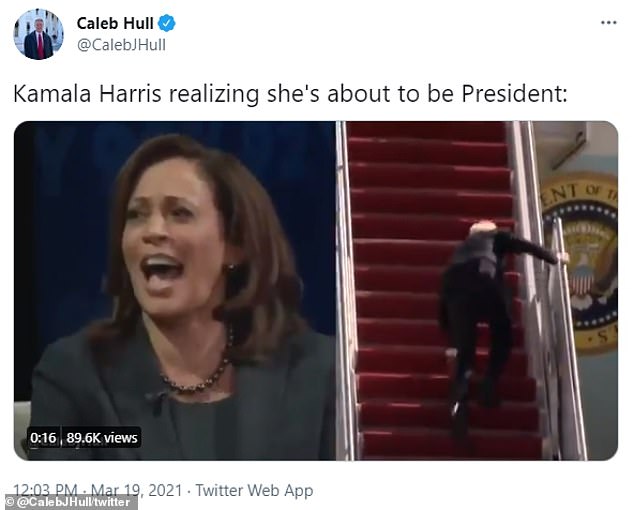 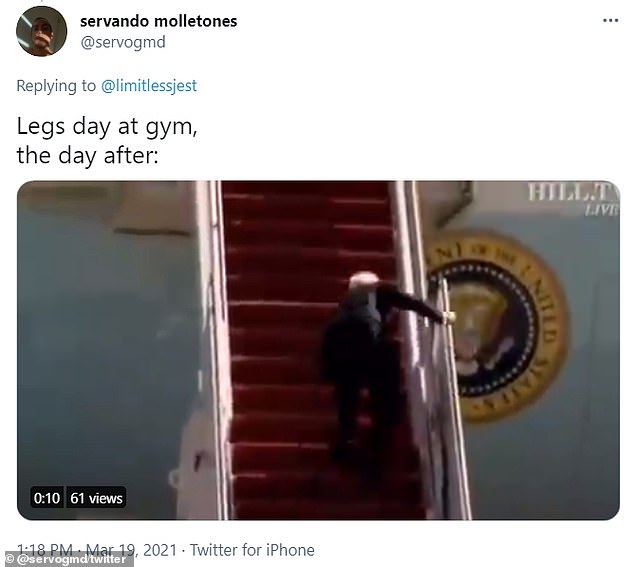 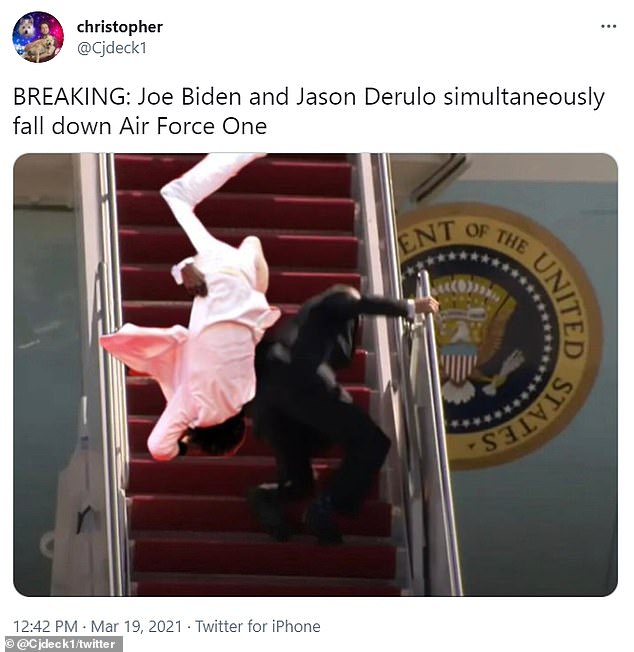 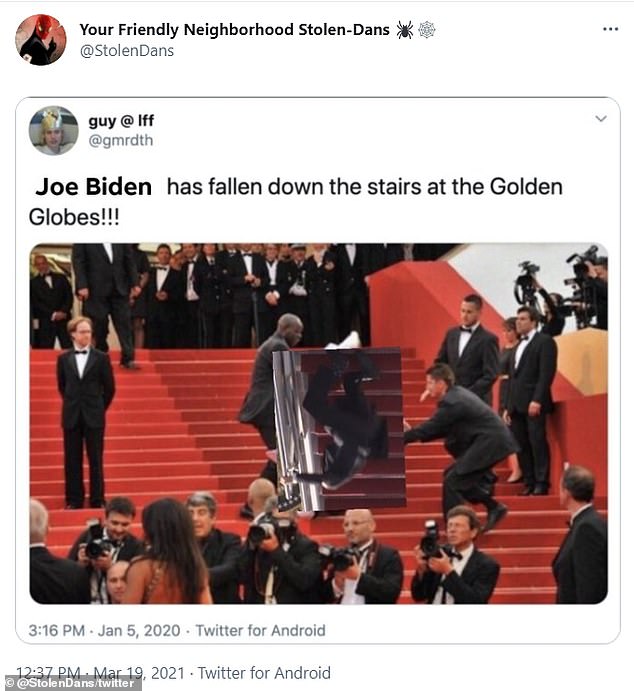 The actual incident happened during the 2011 festival, but internet jokesters managed to trick people into thinking that it was actually singer Jason Derulo tumbling at the Grammys in 2015. The meme above superimposed Biden on the staircase during the Cannes Film Festival in 2011

Others likened the Biden stumble to the famous meme from 2015 showing an intruder being tackled at the Cannes Film Festival.

The actual incident happened during the 2011 festival, but internet jokesters managed to trick people into thinking that it was actually singer Jason Derulo tumbling at the Grammys in 2015.

Despite the fact that the photo does not show Derulo, the meme has persisted – receiving new life in the wake of Biden’s tumble.

Pro Football Network got in on the fun, joking that Biden was felled on the staircase by Tennessee Titans star running back Derrick Henry.

Henry just concluded a historic season with the Titans, rushing for more than 2,000 yards to lead the National Football League.

Another Twitter user joked that Biden fell as a result of an anime battle with Sasuke.

Anime is a Japanese comic book style that has gained popularity worldwide, particularly in the West.

Sasuke Uchiha is a fictional character from the Naruto anime franchise.

Other memes joked that Vice President Kamala Harris was happy at the sight of the president stumbling since she could conceivably move into the top job due to Biden’s perceived frailty.

The memes were so widespread on the internet that the hashtag #Bidenfall went viral. 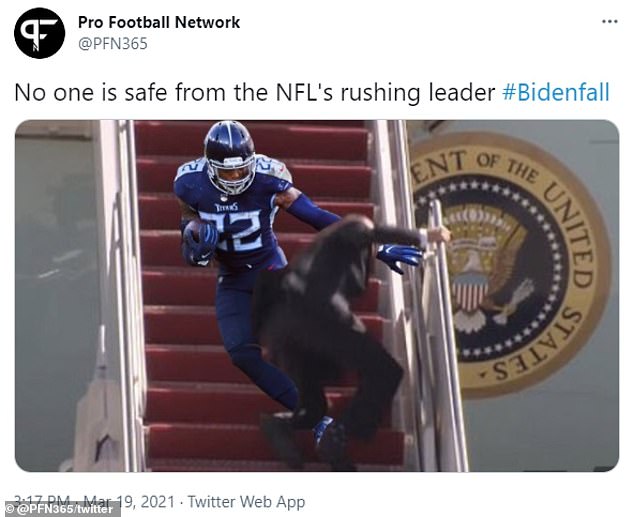 Pro Football Network got in on the fun, joking that Biden was felled on the staircase by Tennessee Titans star running back Derrick Henry 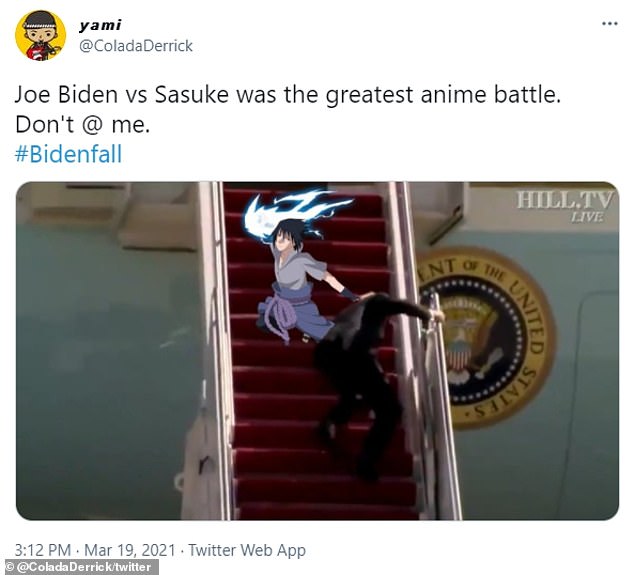 Another Twitter user joked that Biden fell as a result of an anime battle with Sasuke. Anime is a Japanese comic book style that has gained popularity worldwide, particularly in the West. Sasuke Uchiha is a fictional character from the Naruto anime franchise 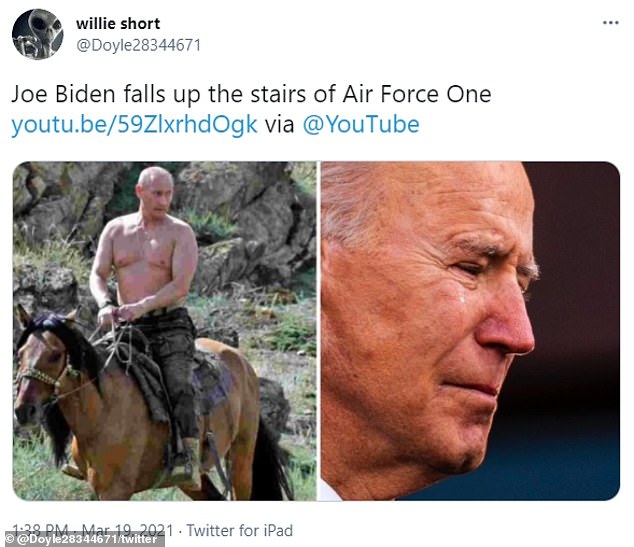 Biden, 78, was boarding the aircraft at Joint Base Andrews just before noon for a flight to Atlanta when he stumbled. He gripped on to the railing, steadied himself and kept going but lost his footing a second time and then a third.

On the third trip, he fell to his knees. He got back up then carried on up the stairs before giving a salute at the top then disappearing into the aircraft.

Once on the plane, Jean-Pierre told reporters that he was ‘100 percent fine’ and was preparing for his trip in Atlanta.

She also said: ‘It’s pretty windy outside. It’s very windy. I almost fell coming up the steps myself.’

Wind gusts were 19mph at Joint Base Andrews when the President was boarding the plane which is officially categorized as a ‘fresh breeze’ by the internationally recognized Beaufort Scale.

Once he landed in Atlanta, President Biden remained on AF1 a short while until Harris – who had flown separately on AF2 – joined him on board. The White House said it was to discuss their agenda for the day.

She then disembarked with him, walking behind him as he slowly descended the stairs.

The fall does nothing to reduce concern for and speculation over Biden’s cognitive health which was has grown in recent months thanks to a series of mix-ups on his behalf.

A White House pool report was issued by the reporters traveling with Biden within seconds of the fall but it was not covered extensively by major news networks for around 30 minutes after it happened and it is missing from the websites of many major outlets. 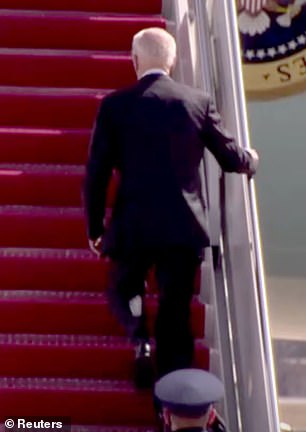 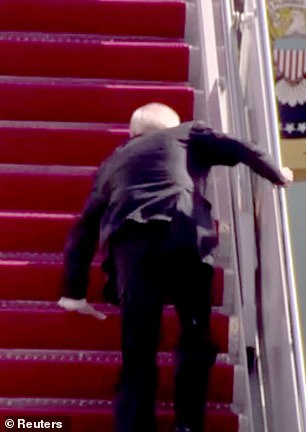 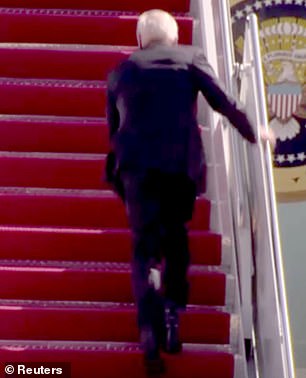 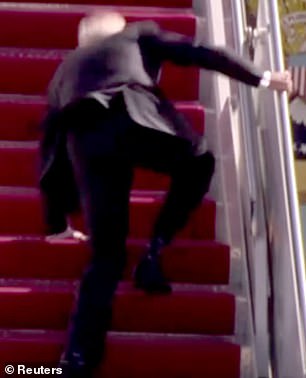 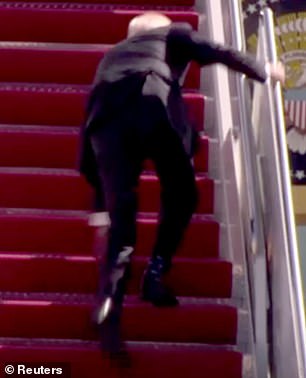 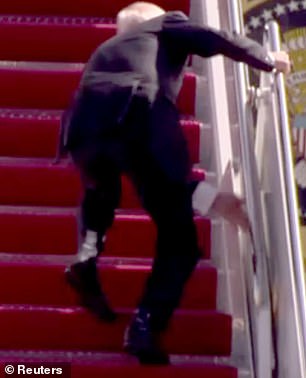 Biden then got back on his feet somewhat and carried on walking, clinging on to the railing 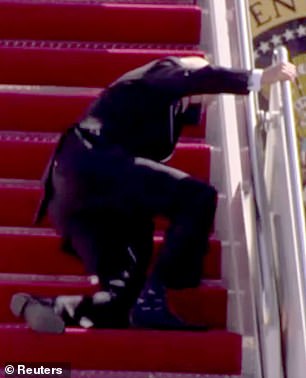 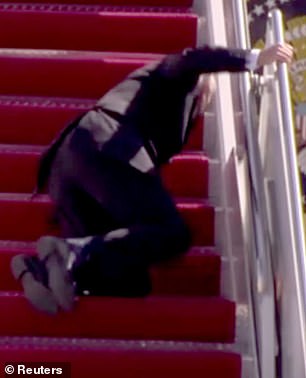 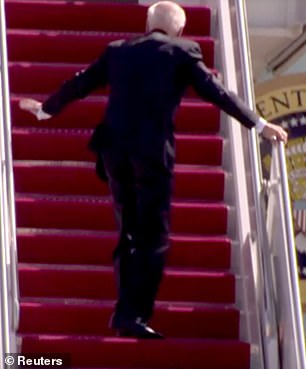 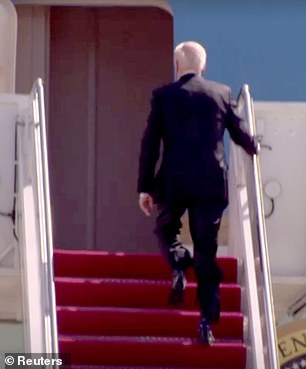 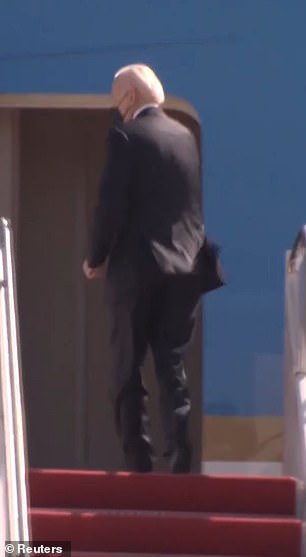 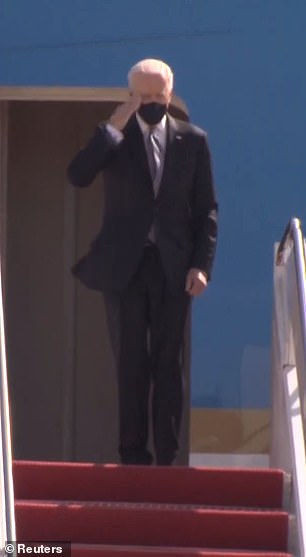 Once at the top of the stairs, Biden gave a military salute before disappearing into the aircraft. The White House says he is 100% fine and is preparing for his trip in Atlanta

Republicans say the gentle media coverage of Biden’s fall is another example of the ‘mainstream media’ giving Biden the soft treatment after hammering President Trump for four years.

The fall is also the latest in a string of incidents which raise concern over the President’s health and comes a day after he  referred to Vice President Kamala Harris as ‘President Harris’.

Until recently, Biden was walking in a boot after breaking his foot while playing with his dog, Major, in November. 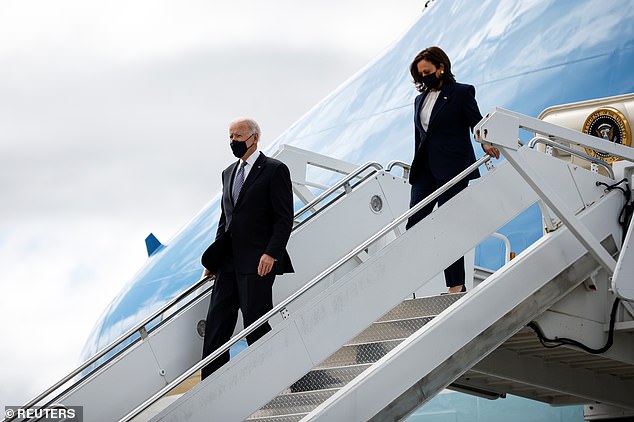 Biden disembarked Air Force One with Kamala Harris once he was in Atlanta. She flew separately then, when AF1 was sitting on the tarmac, went on board. The White House says they wanted to discuss their plan for the day. She then walked behind him as he slowly descended the stairs 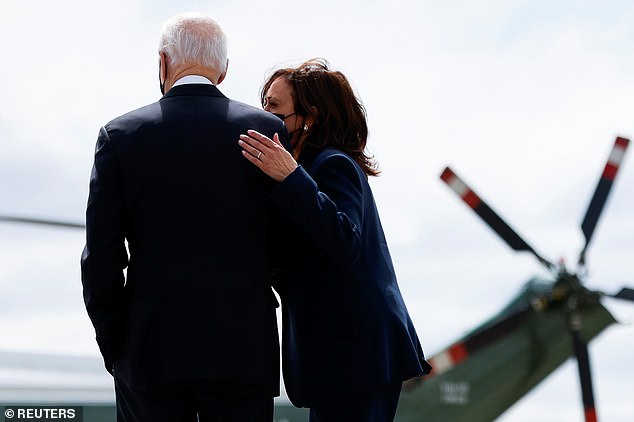 His doctor at the time said he was otherwise in good health. In December 2019, there were concerns over Biden’s health, in particular leading up to the 2020 election.

He released medical records which showed he has an irregular heartbeat and high cholesterol, but which described him as a ‘healthy, vigorous 77-year-old.’

Some experts questioned whether or not he was as healthy as he claimed. 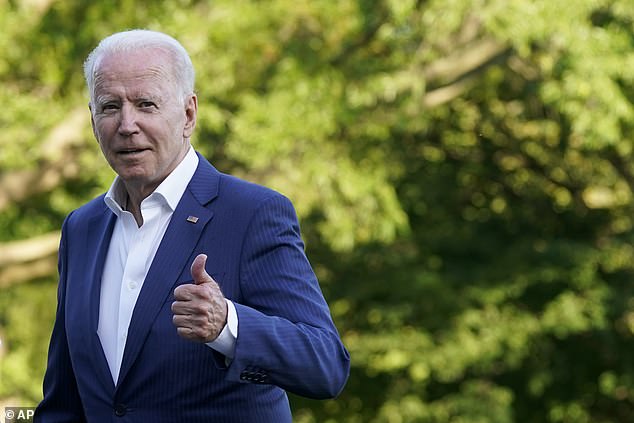 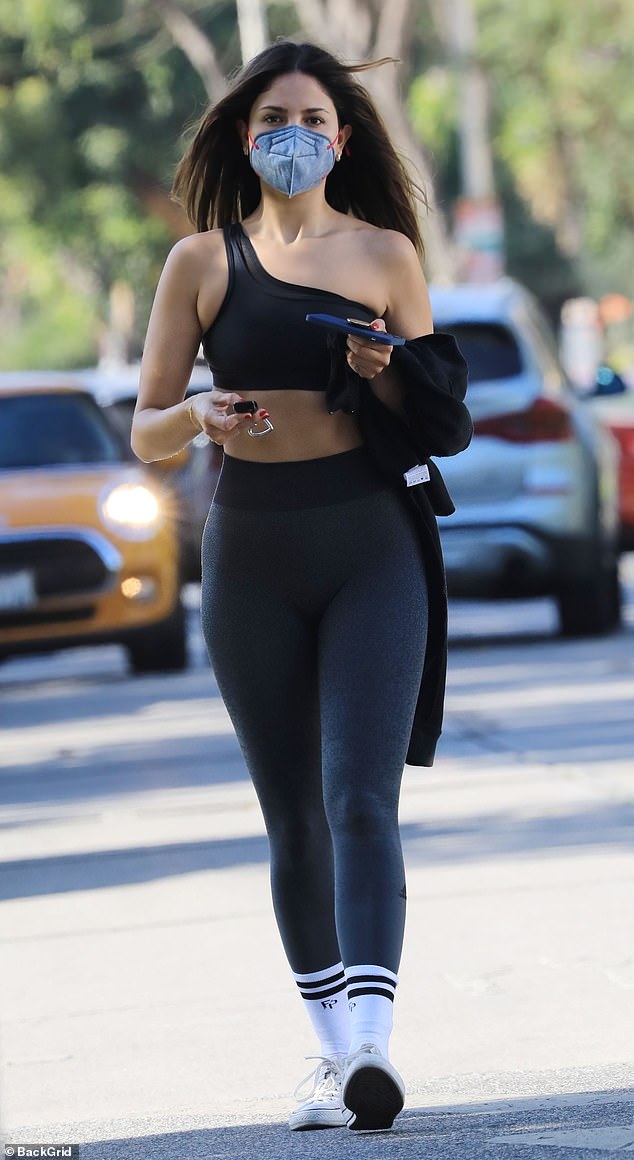 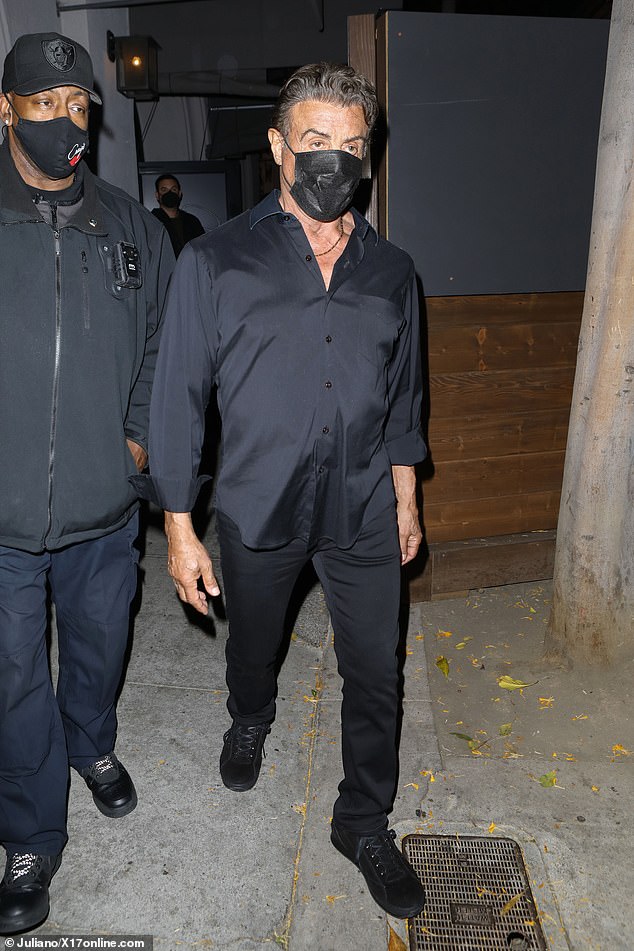 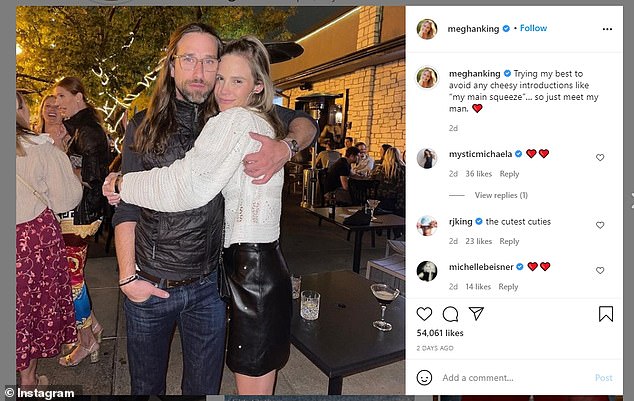 Surprise! Taraji P. Henson Is Launching a Music Career: “It’s Never Too Late For Anything”
58 mins ago