A Louisiana man who booked a $15,000 vacation to Disney World was arrested by law enforcement officials when he refused a mandatory temperature check at the entrance to the Orlando theme park.

Sills pleaded not guilty to the charge of trespassing, the Orlando Sentinel reported. He is scheduled to appear in a Central Florida court on Monday.

According to the arrest report, Sills was confronted outside the Boathouse Restaurant at Disney Springs by Disney security and Orange County Sheriff’s deputies.

According to the deputies, Sills skipped the temperature screening tent and then refused to go back. He then ignored orders from security guards and sheriff’s deputies to leave the area, according to authorities.

In the body cam footage, a security officer is heard in the video saying: ‘He’s going to have to go for the day.’

The officer and sheriff’s deputies are seen approaching Sills outside the restaurant.

‘We are going to escort you now, sir,’ a deputy says. ‘You are being asked to leave the premises by the security manager at Disney Springs.’ 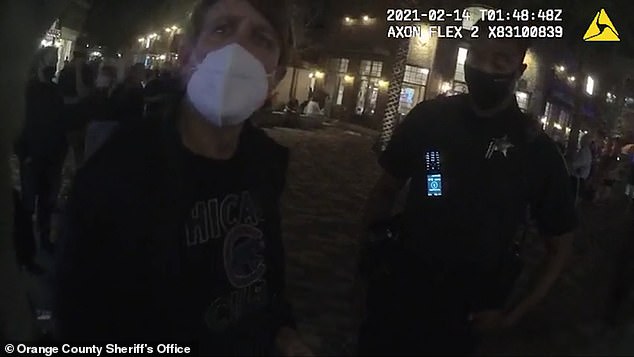 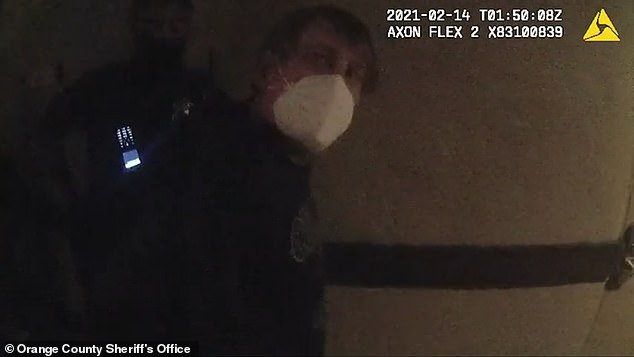 ‘You are officially being trespassed.’

‘For what reason?’ Sills said as he stood and looked at his phone while surrounded by at least three deputies and security personnel.

Sills is then seen arguing with the deputies and the security personnel.

According to the arrest report, Sills refused to leave. He then pleaded with the deputies to allow him to stay.

In the video, someone can be heard saying: ‘All you had to do was get temperature checked. That’s it!’

He then offered to go back to the screening tent to get his temperature check, but by that point it was too late.

‘Will you take my temperature before you kick me out, please?’ he asked as he was led away in handcuffs.

‘They’ll do that in jail, sir,’ a deputy was heard saying in the video. 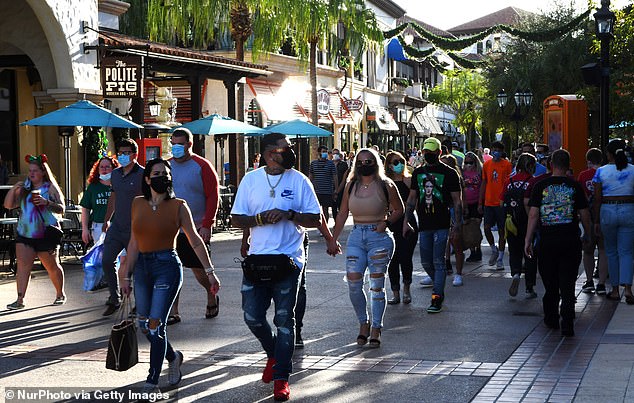 Visitors to Disney Springs are seen on Thanksgiving Day at Walt Disney World. Guests to the facility must submit to a temperature check before entering, according to Disney

He then offered to cooperate with the deputies.

‘Millions of guests visit our theme parks each year, and in rare instances when things of this nature occur, we hold them accountable,’ Disney spokesperson Andrea Finger said in a statement.

This is the second time in recent weeks that a guest at Walt Disney World has been forcibly removed from the theme park and arrested by authorities over their refusal to observe COVID-19 guidelines.

Kelly McKin, 51, of North Palm Beach, Florida, was charged with battery on a uniformed security officer last month after allegedly spitting on a security officer at Walt Disney World after she asked him to put on a mask.

The security officer was not directly hit, but some saliva got on her forehead, the arrest report said. 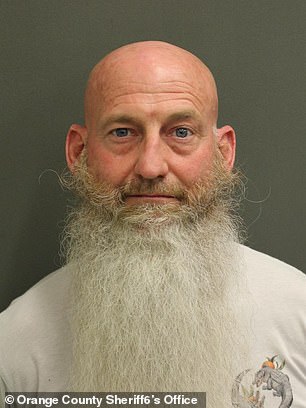 Last month, Kelly McKin, 51, of North Palm Beach, Florida, was charged with battery on a security officer. McKin denied spitting on a security guard at Disney’s Contemporary Resort in February

During questioning by a sheriff’s deputy, McKin denied spitting on the security guard at the theme park.

McKin was told not to return to Disney World.

In August, an Orlando man was arrested for allegedly striking an Epcot security guard who reminded the visitor to follow the theme park’s mask rules.

Enrico Toro, 35, was arrested for allegedly hitting the guard in the head and threatening to kill him, an arrest affidavit said. He was charged with misdemeanor battery.

In February, another Disney guest, 32-year-old Stephen Johnson, was arrested after he was confronted by a Disney’s Reedy Creek Fire Department official who asked him to wear a mask.

A sheriff’s report said the man screamed, ‘I do not have a mask, buddy!’

The firefighters were assisting Johnson’s wife, who appeared to be drunk and had injured her ankle in the lobby of the Walt Disney World Dolphin Hotel.

He was apparently upset that his wife was being taken away and threatened to kill a sheriff’s deputy and struggled with the officer before grabbing a gun from the belt of an Orange County Sheriff deputy, the arrest report said.

‘Face coverings are required for all Guests (ages 2 and up) and Cast Members, including those who have received a COVID-19 vaccine. Please bring your own face coverings and wear them at all times, except when dining or swimming,’ the website said.

Anyone displaying a temperature of 100.4 degrees Fahrenheit or above ‘will be directed to an additional location for rescreening and assistance.’ 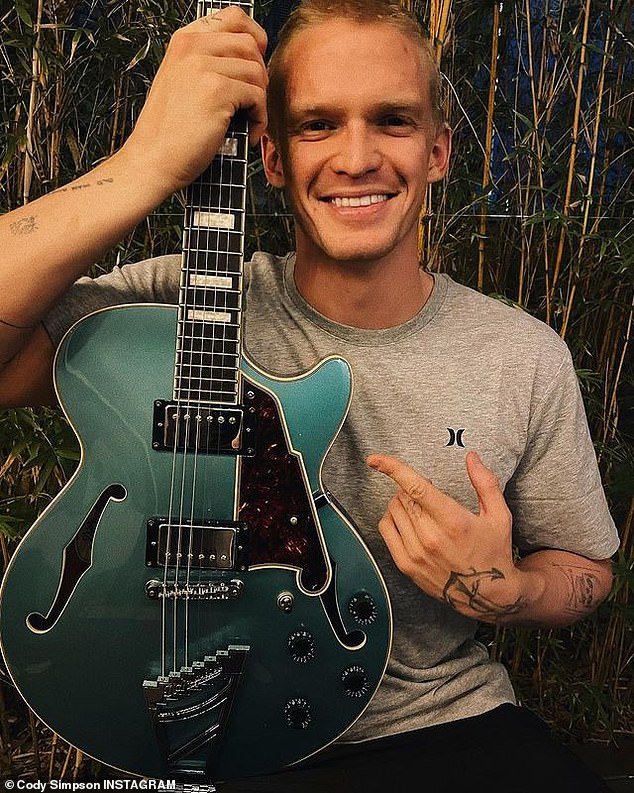 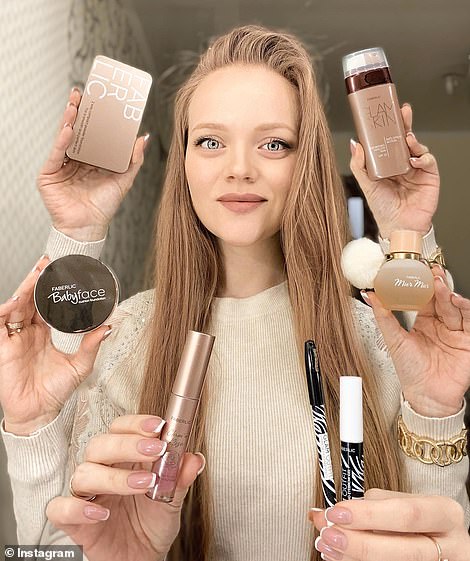 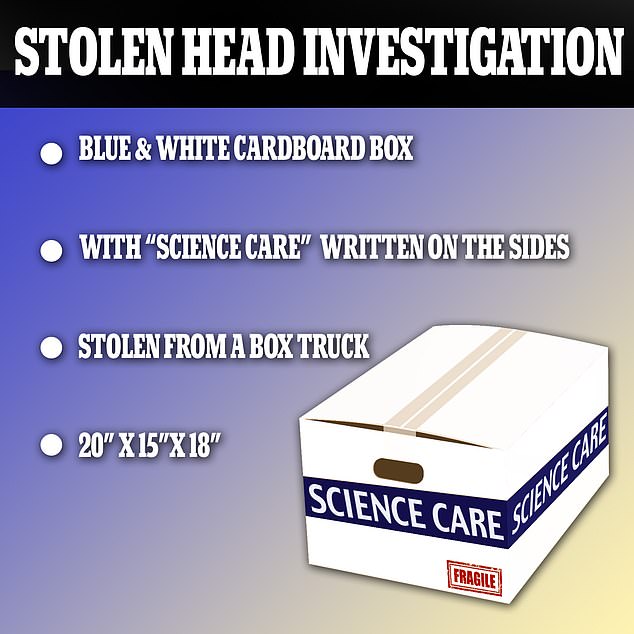 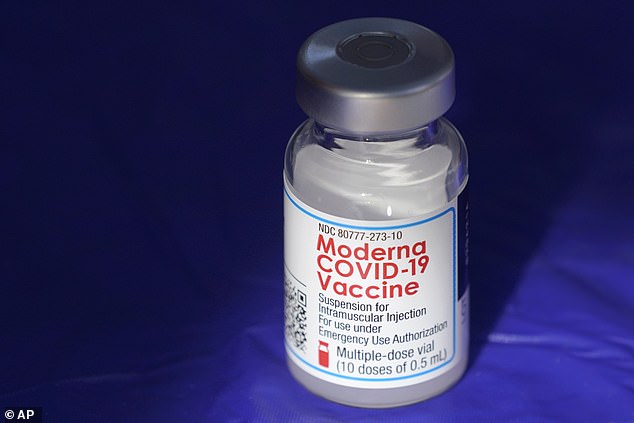