Three Yemeni men have been put to death in public in the country’s rebel-held capital after being convicted of murdering children.

Ali al-Naami, 40, Abdullah Al-Makhali, 38, and Mohammed Arman, 33, were dressed in blue prison jumpsuits as they were led to Tahrir Square in Sana’a on Wednesday.

The men were then forced to lie down before being shot in the back by an executioner in green army fatigues and black gloves. Their bodies were then rapped up in red rugs and carried away.

In one image, a security guard can be seen grinning as the executioner put an AK-47 to a prisoner’s back in front of hundreds of spectators.

It was Sana’a’s first public execution since August 2018, when the Iran-backed rebels shot three men and hung their bodies from a crane for raping and killing a child.

Yemen has been embroiled in a civil war since 2014, when the Houthis swept across much of the north and seized the capital, forcing the country’s Saudi-backed government into exile.

Three Yemenis were executed at Tahrir Square in the capital of Sana’a on Wednesday. Pictured: An executioner wearing green army fatigues and black gloves prepares to shoot Ali al-Naami, 40, who was convicted of murdering his three daughters 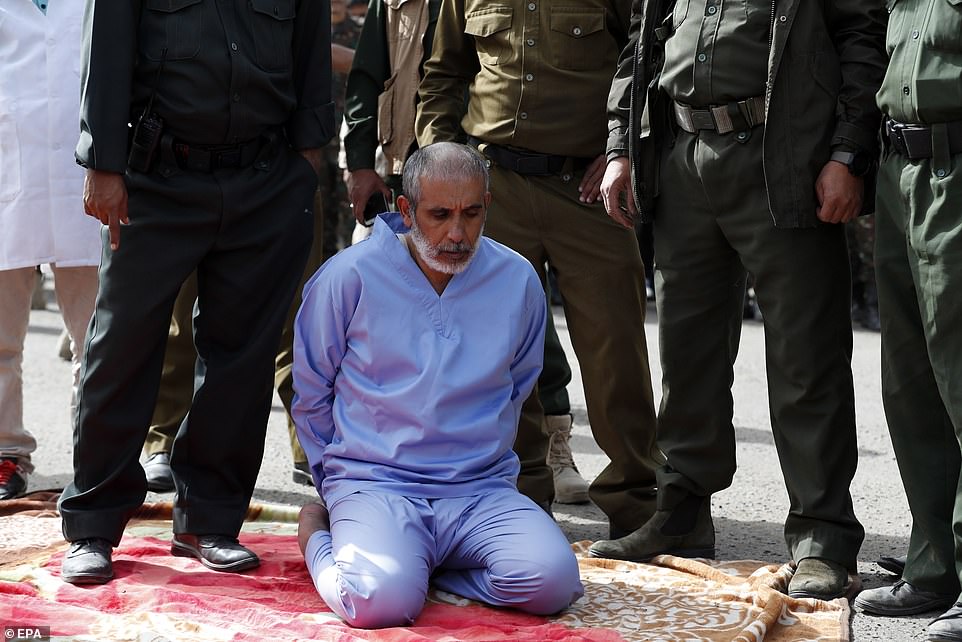 Al-Naami, convicted of murdering his three daughters, is pictured kneeling on a red rug before an executioner shot him dead 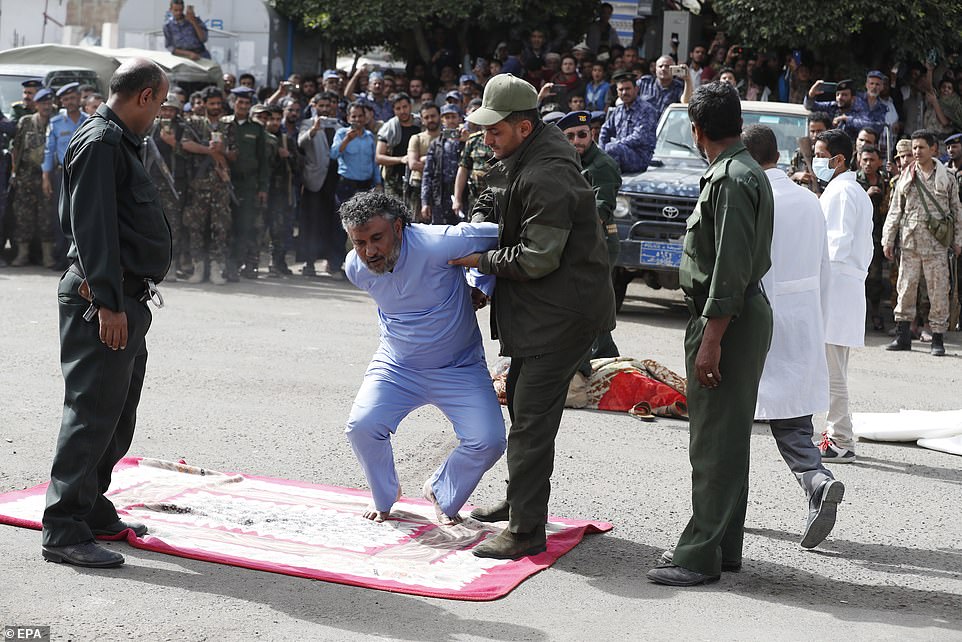 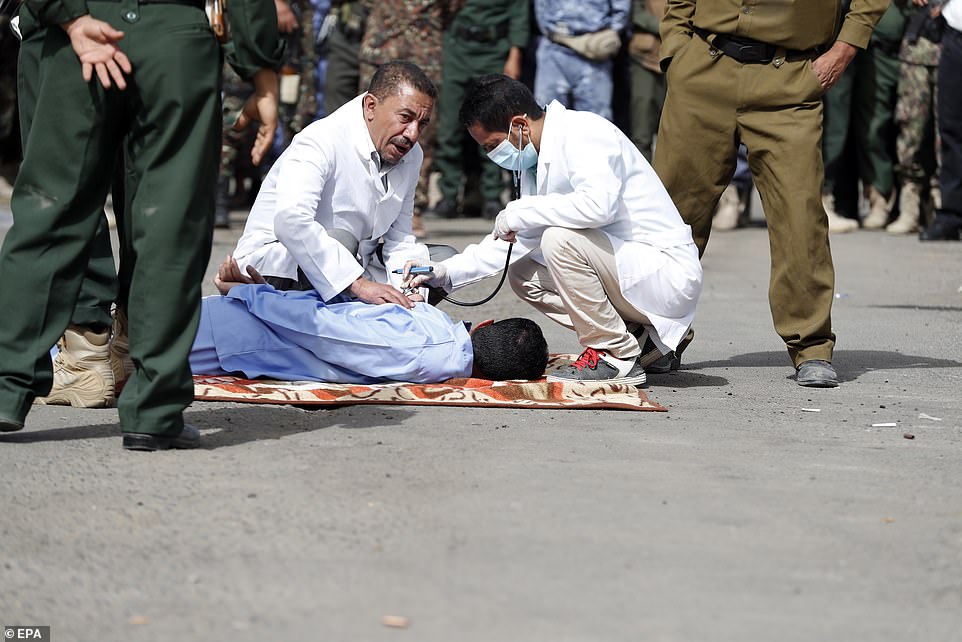 Medics check the life signs of another executed prisoner, Mohammed Arman, 33, who was convicted of raping and murdering a boy 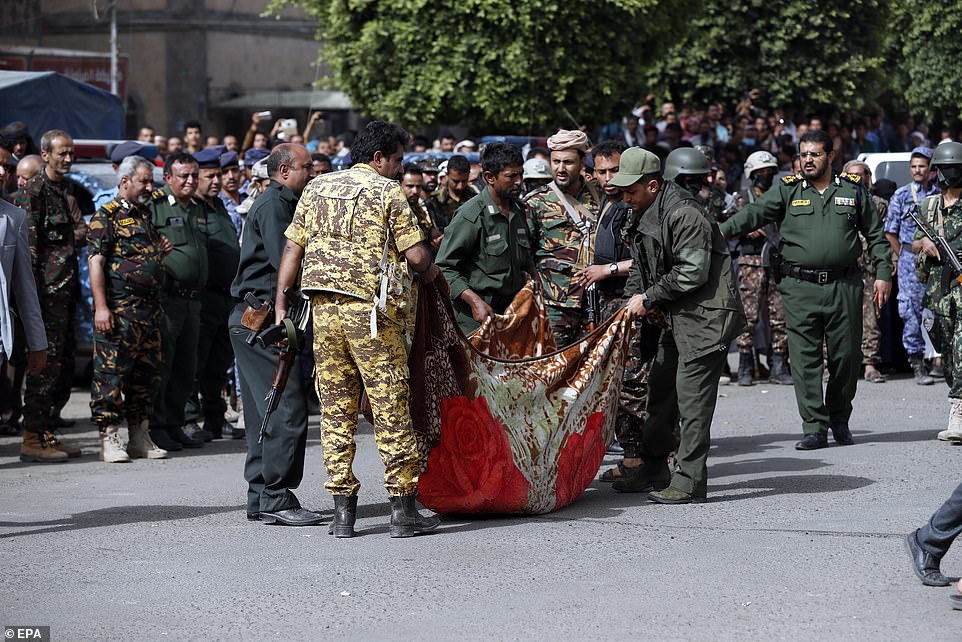 A Saudi-led coalition entered the conflict the following year to try and weaken the Houthis and drive them out of the capital.

The war has killed more than 130,000 people in Yemen and spawned the world’s worst humanitarian crisis.

In March, Saudi Arabia offered a cease-fire proposal to the Houthis in an attempt to halt the war, but fighting has continued to rage around the city of Marib as the rebels push to capture the city and complete their control over the northern half of the country.

The Iran-backed rebels have made much of their crime-fighting efforts in areas under the control, which include most of the north of country.

Those executed on Wednesday had been convicted of particularly heinous crimes.

Abdullah Ali al-Mukhali and Mohammed Arman, had been convicted of raping and killing an eight-year-old boy. 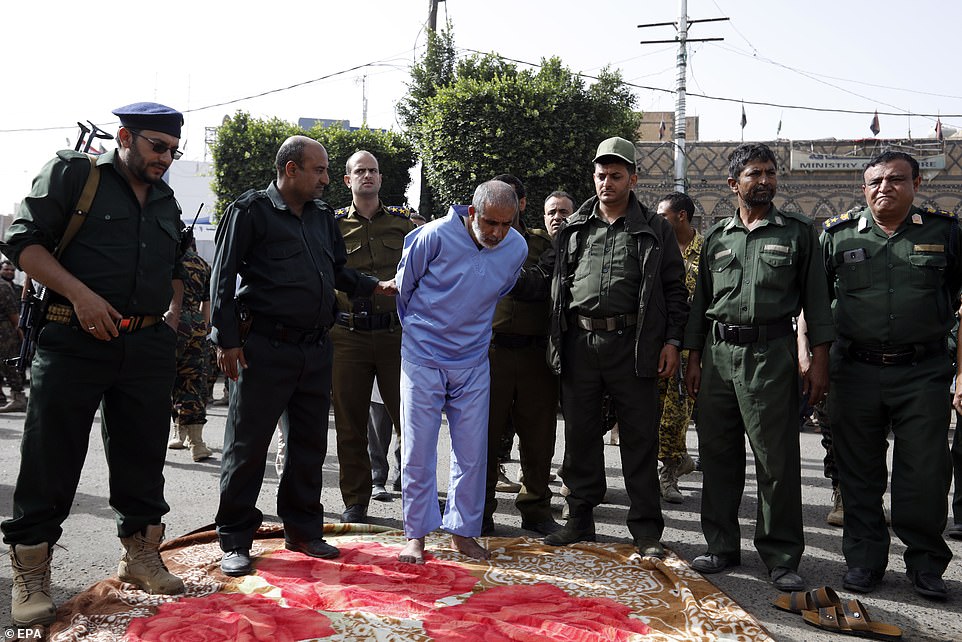 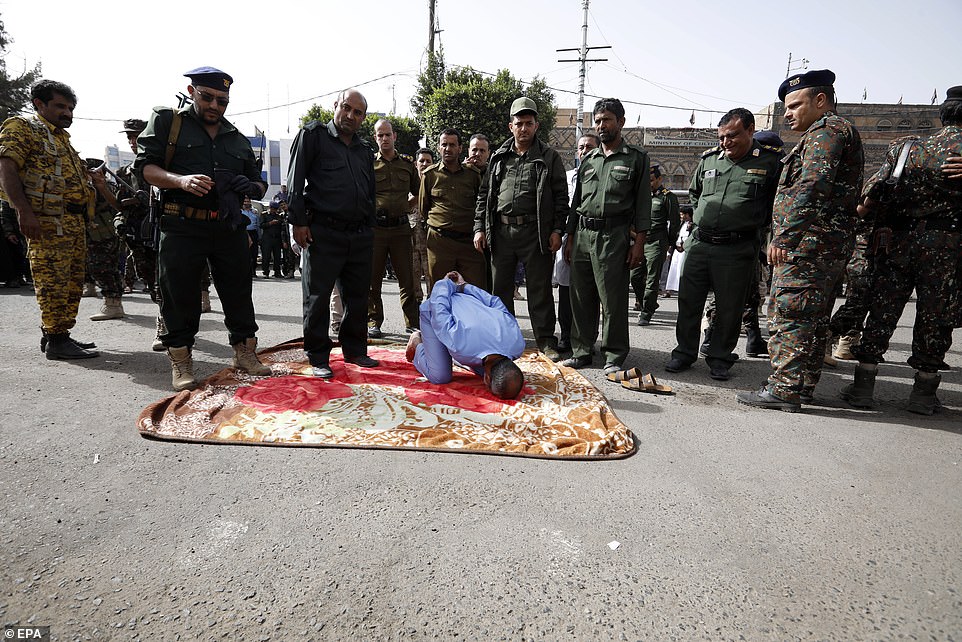 Al-Naami was pictured wearing a blue jumpsuit and being lead to his execution by soldiers before medics prepared him. He was kneeling on the carpet before placing his forehead to the floor 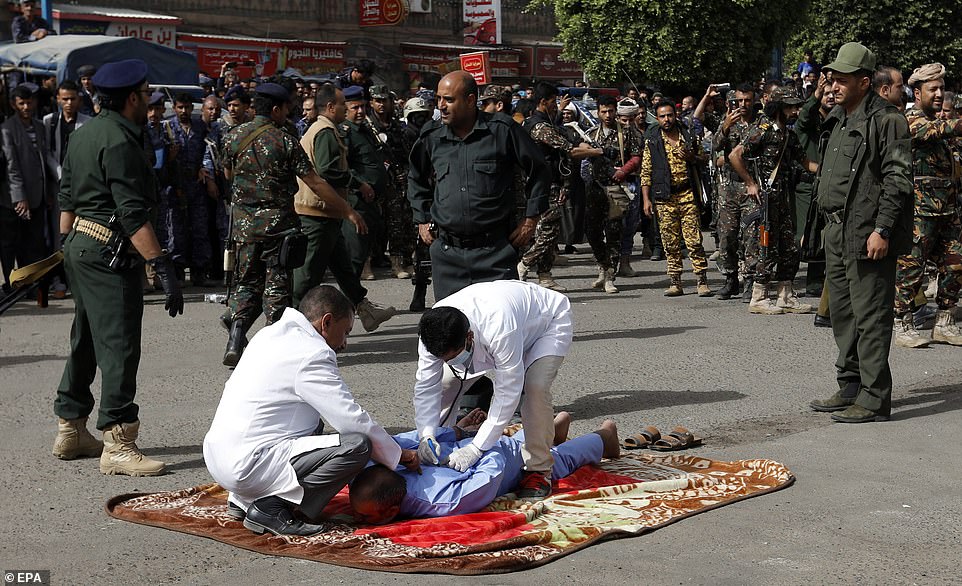 Two medics could be seen holding al-Naami to the floor, with one placing a hand on his shoulder and the other, who was wearing a stethoscope around his neck, holding a pen 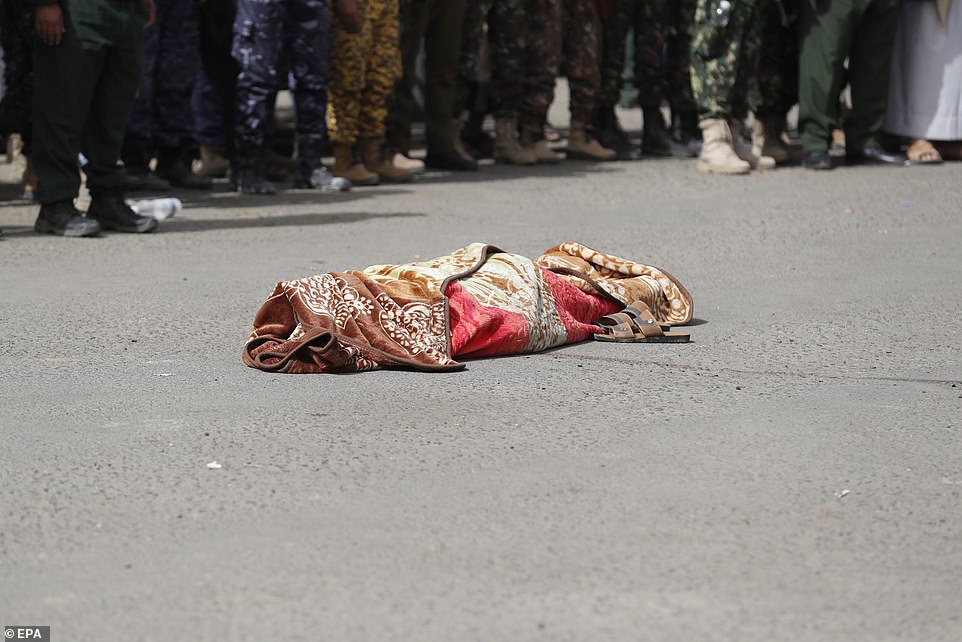 After the execution, al-Naami was wrapped in the carpet and soldiers carried him out of the square

Al-Naami was convicted of murdering his three daughters Rahaf, seven, Raghad, 12, and Malak, 14, in June 2019.

He had admitted to strangling his daughters and drowning them in a water tank after the mother left the house due to domestic disputes with him.

In pictures from the execution, he could be seen kneeling on the carpet before placing his forehead to the floor.

After the execution, al-Naami was wrapped in a carpet and soldiers carried him out of the square. 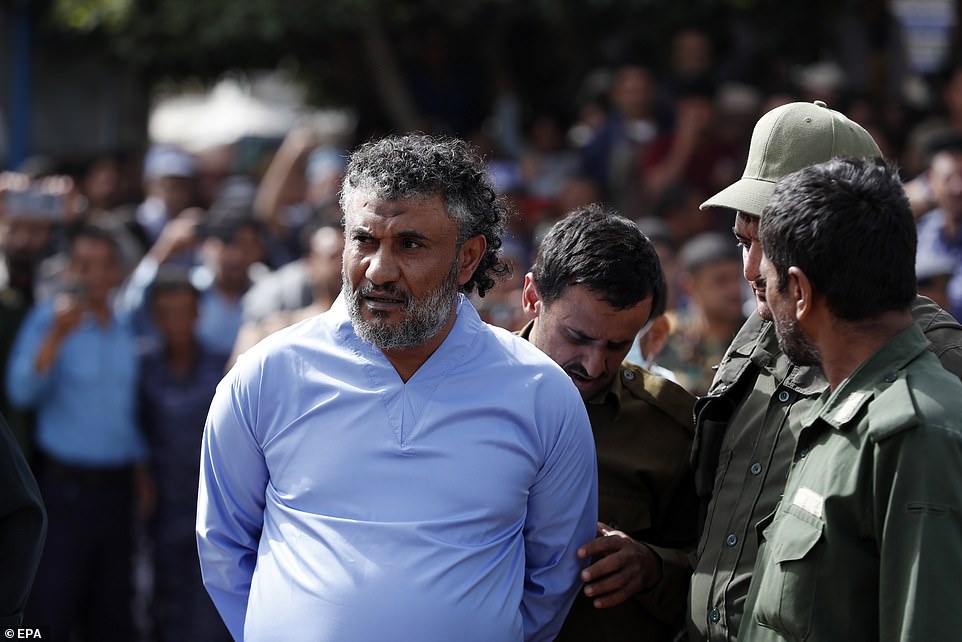 Soldiers lead Abdullah Al-Makhali, convicted of raping and murdering a boy, to his execution at the public square in Sana’a 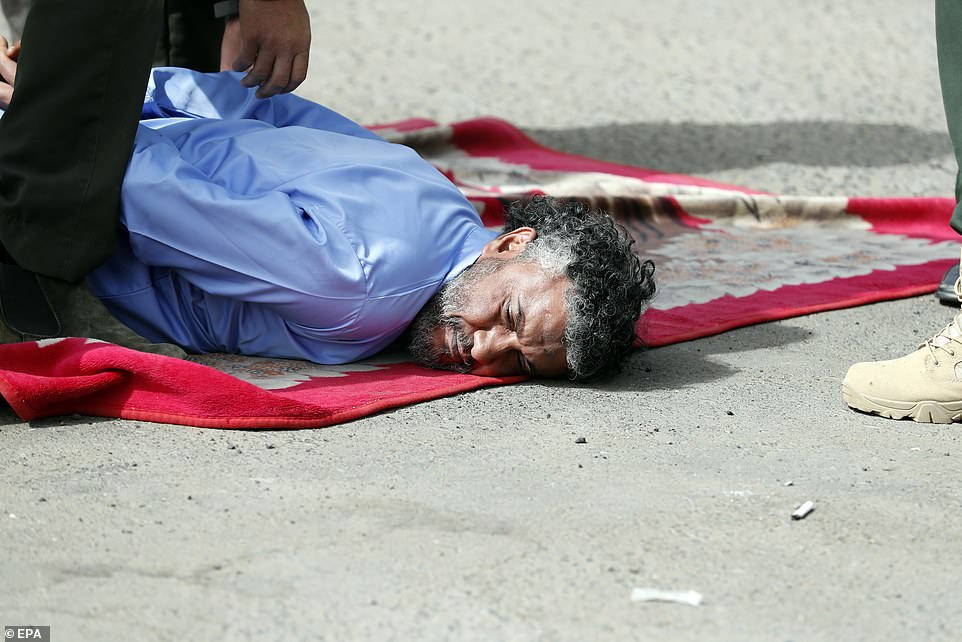 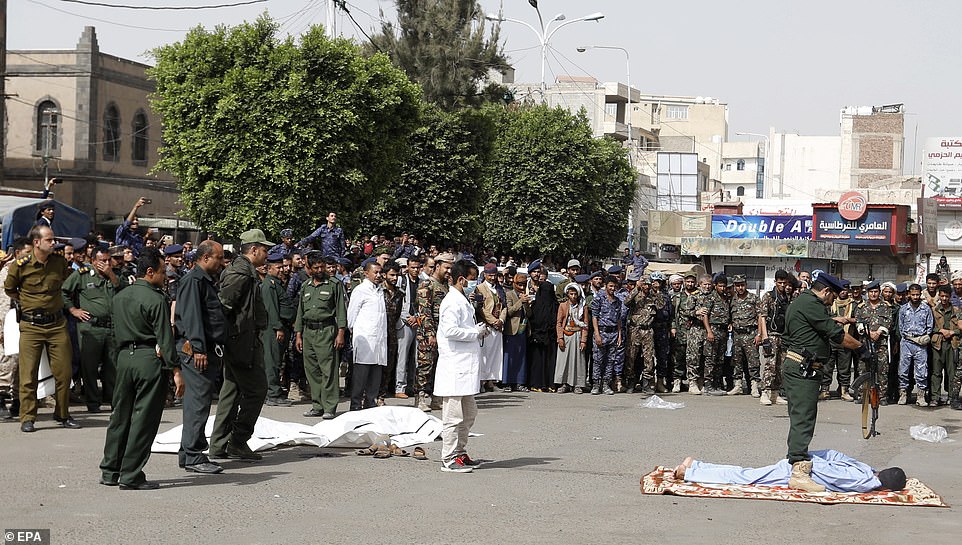 A police officer executes Mohammed Arman, who was convicted of raping and murdering a boy 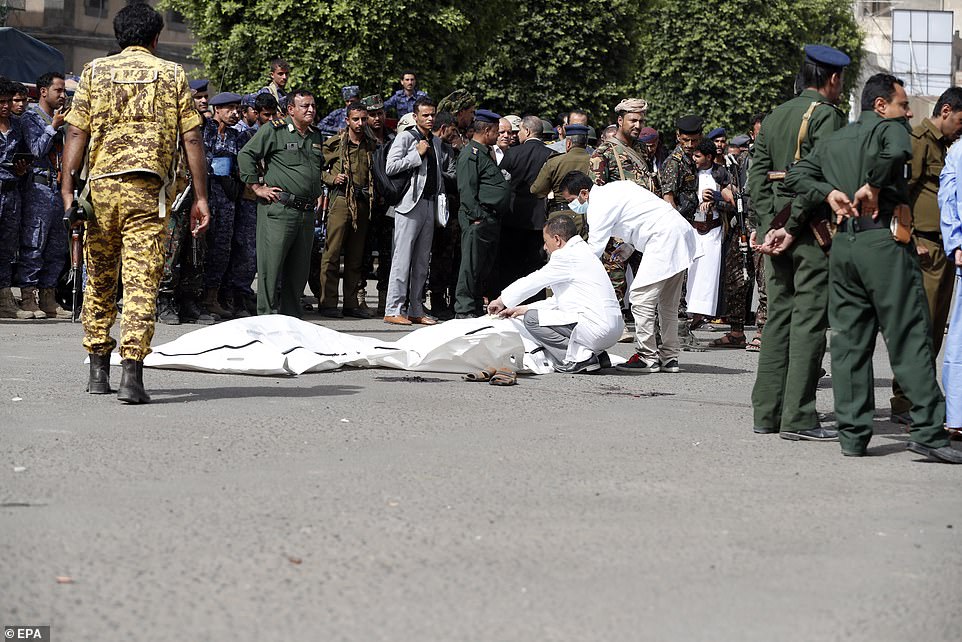 Soldiers wrap up the bodies of the two men after they were executed in front of a crowd of spectators, many of which took pictures on their phones

Spectators could be seen filming the executions on their mobile phones and video cameras.

In another image, two medics could be seen checking on a prisoner, with one placing a hand on his shoulder and the other, wearing a stethoscope around his neck, holding a pen.

Al-Makhali and Arman were convicted of raping and murdering a boy Mohammed al-Haddad before they were shot dead in the public square.

Soldiers stood guard and another soldier was pictured placing Al-Makhali at the spot of his execution.

Soldiers then wrapped their bodies in white cloths and carried them out of the square. 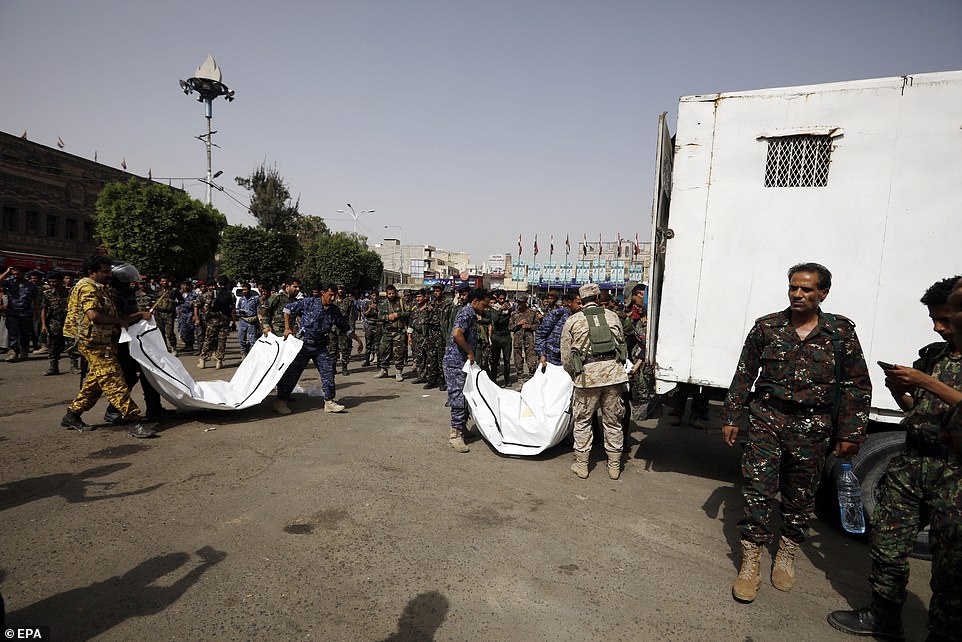 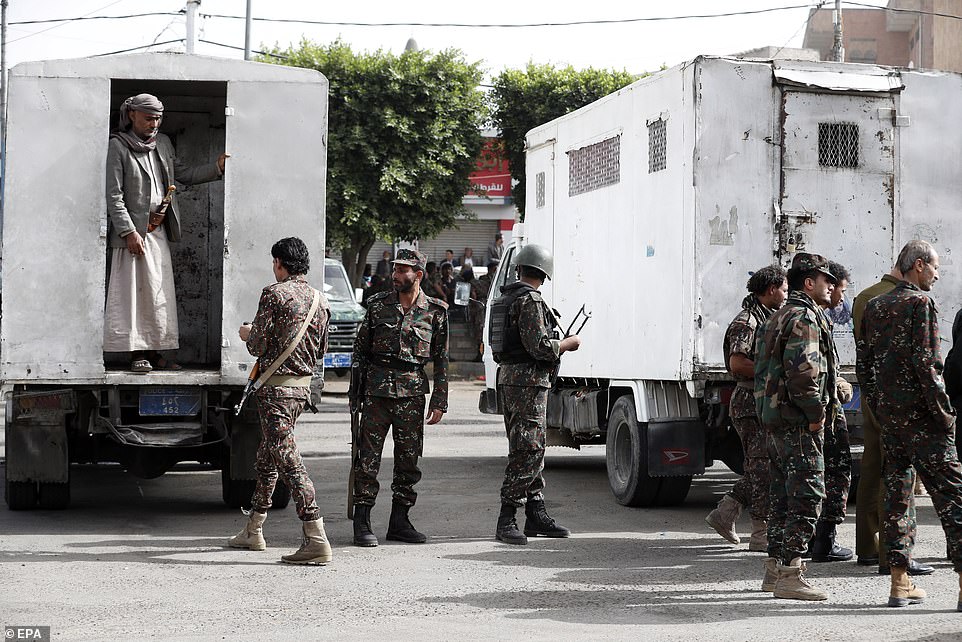 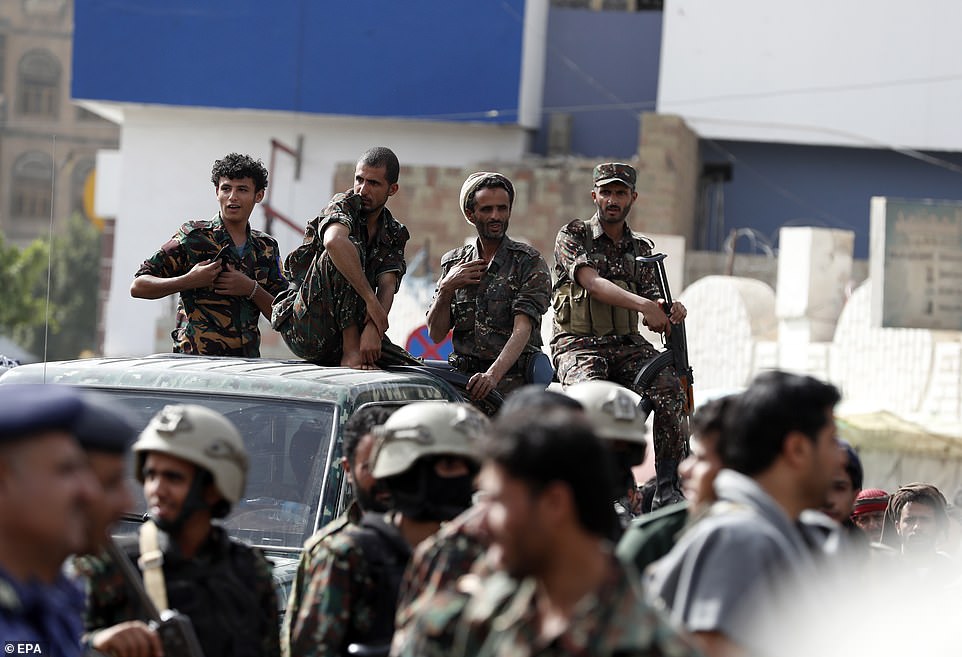 Soldiers stand guard during the execution of Abdullah Al-Makhali, 38, and Mohammed Arman 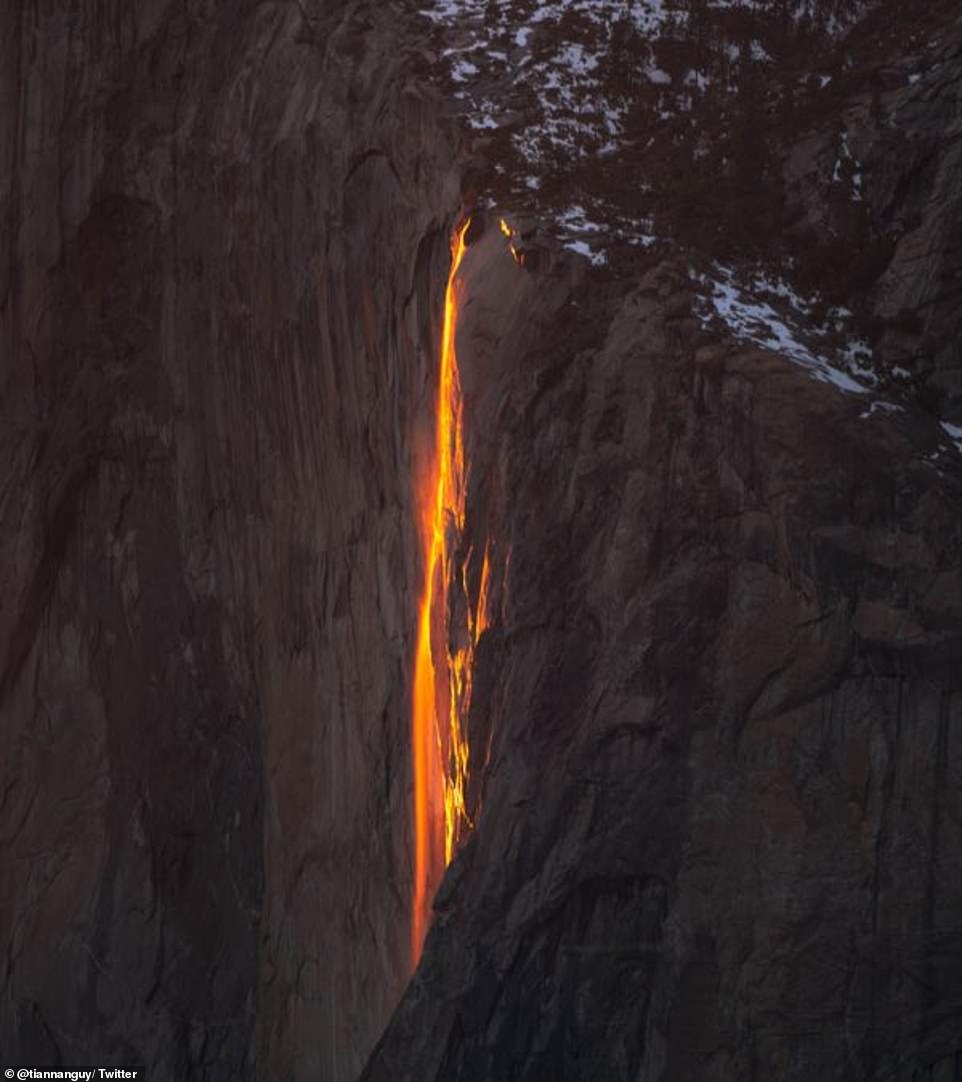 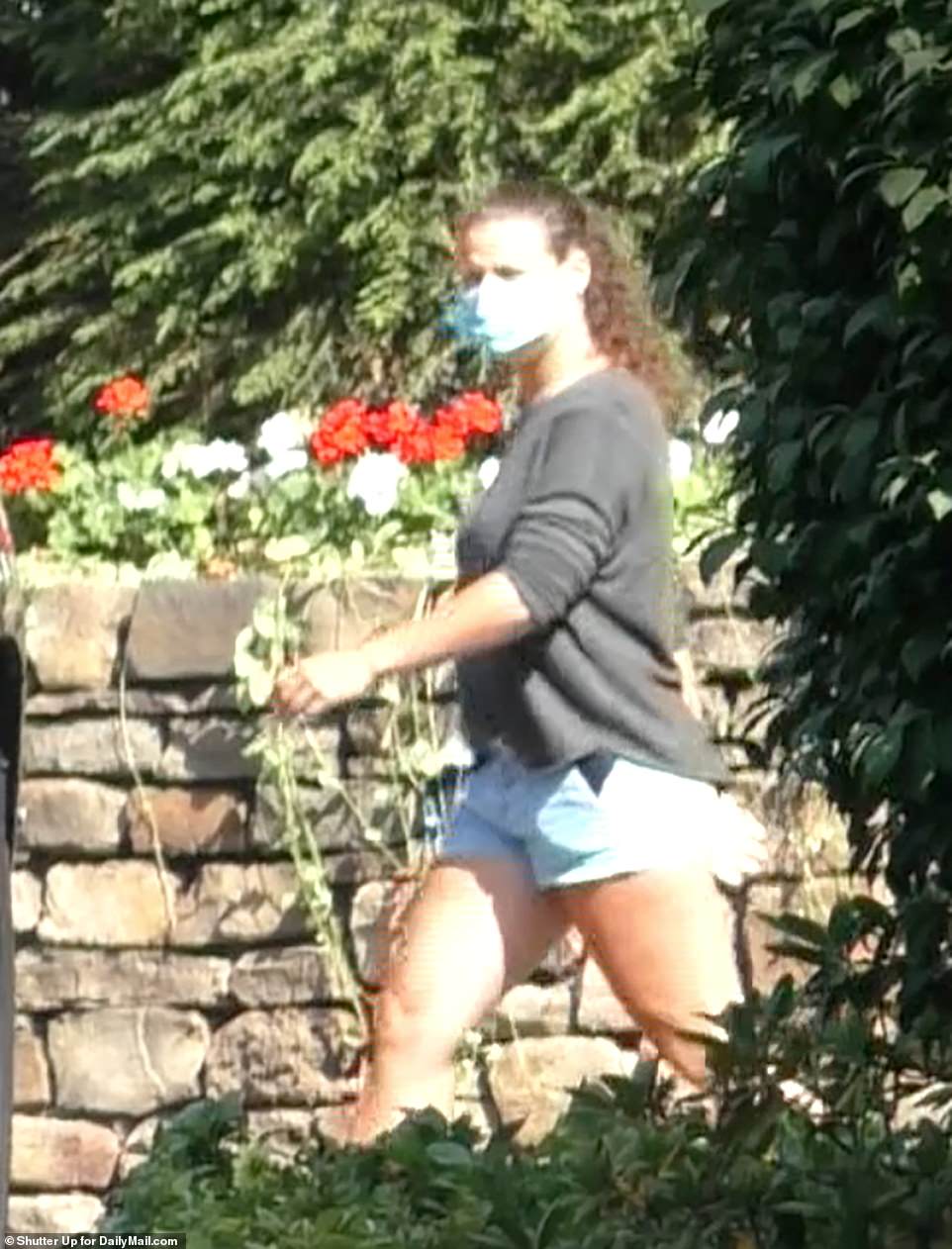 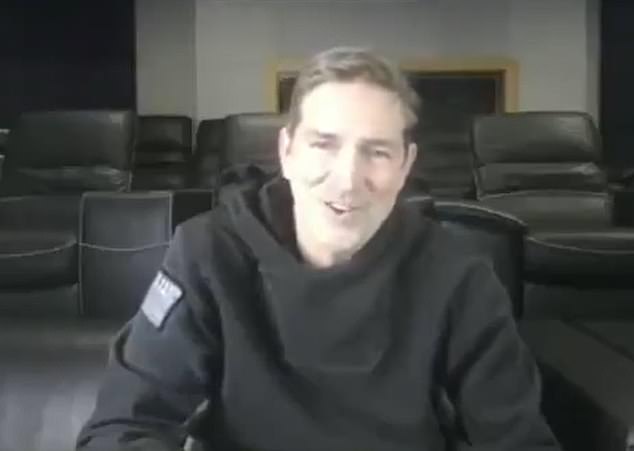