Cardi B has deleted her controversial tweet praising the police and hitting out at the ‘defund the police’ movement.

The Bodak Yellow singer had responded to calls to ‘defund the police’ on Thursday, tweeting the idea was ‘bu*****t’.

‘We need cops and that’s facts we just need strict laws for cops. If you shot someone just like civilians you will go to jail that same day, get charge, wait for bond and go to trial.

‘That will make you think twice about shooting anyone.’

The seemingly pro-cop message sparked a fierce backlash against the rapper, who has spoken out about police brutality in the past.

‘Cardi B thinks she is so slick her axx [sic] used to say defund the police untill [sic] she got called out for saying that and she walks with bodyguards,’ one user posted.

Others branded her ignorant about the movement, and others tried to explain it to the singer.

‘Cardi. Defund the police does NOT mean ABOLISH the police,’ one person tweeted. ‘It means reallocating all the money from the police to local municipalities. To social workers. Housing, education, employment, mental health care, and youth services. Stop sending military weapons used in war to police.’

Within a few hours of posting, Cardi B had deleted her tweet. 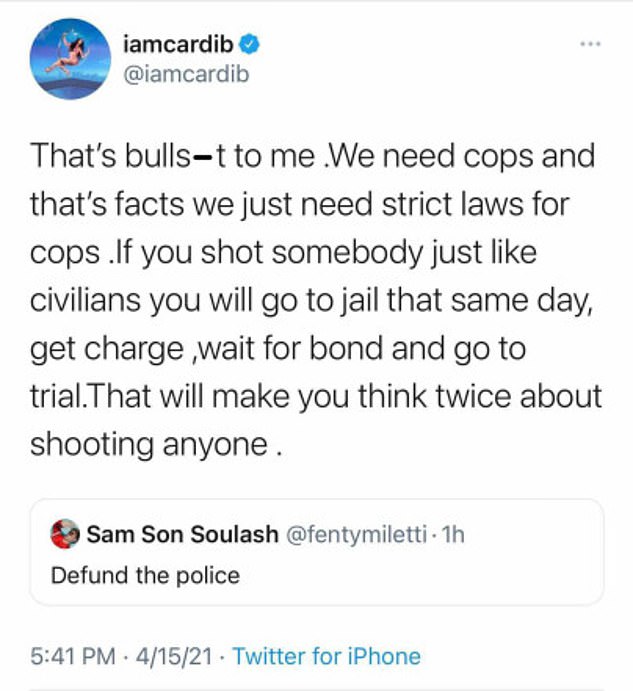 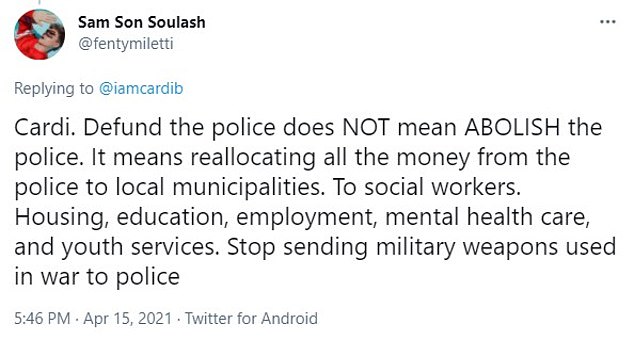 Cardi B has been much more critical of the police in other posts.

She  also posted a message with a more anti-police angle after the shooting of 13-year-old Adam Toledo.

She tweeted: ‘That video of that 13 year old falling on his a** after getting shot by a cop is so sick, sad and disgusting. I’m so tired of police brutality & entitlement. We are sooo tired of it .When will it end? like [sic] this s*** is becoming too much. It’s truly traumatizing.’

Cardi B has been outspoken in the past about issues involving police brutality and supports the Black Lives Matter movement, in addition to Bernie Sanders.

A day before she posted her deleted tweet, she posted a video calling out Republicans.

‘We have seen a young man get killed by a cop, unarmed, and the excuse was the cop that had been on duty for 20-plus years, mistaked [sic] a gun for a taser,’ Cardi B said in the video.

‘And my thing is, where the f*** are you Twitter blue-check Republicans at? Y’all are the loudest on this motherf***ing app.

‘Y’all not saying nothing, y’all not complaining, y’all blame everything with what’s wrong in America beside the police. Y’all have been very silent! What’s going on?’

The reaction on Twitter to Cardi B’s message was mixed

Cardi B also posted a video on Twitter in the aftermath of the George Floyd murder, expressing support for the protests.

On Sunday, Daunte Wright, 20, was shot and killed when a Brooklyn Center police officer appeared to mistakenly fire her gun during a traffic stop, instead of her Taser.

On March 29, 13-year-old Adam Toledo was shot and killed by a Chicago police officer, with the bodycam footage sparking outrage upon its release on Thursday.

Additionally, the trial of former police officer Derek Chauvin in the death of George Floyd is drawing to an end, with closing arguments set for Monday.

The ‘Defund the Police’ movement focuses on reallocating local resources from the police to other areas of a community, such as social services.

‘Abolish the Police,’ meanwhile, is a phrase pointing at getting rid of the current policing system altogether and enacting new community safety procedures from scratch. 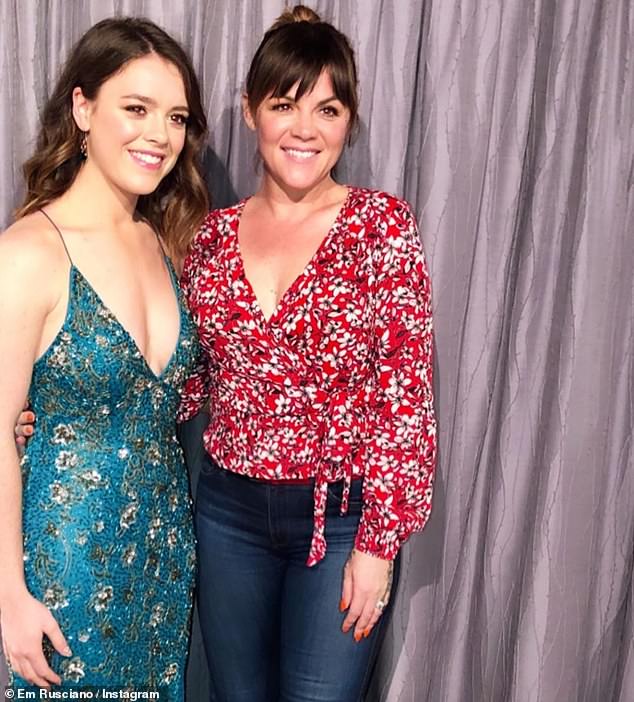 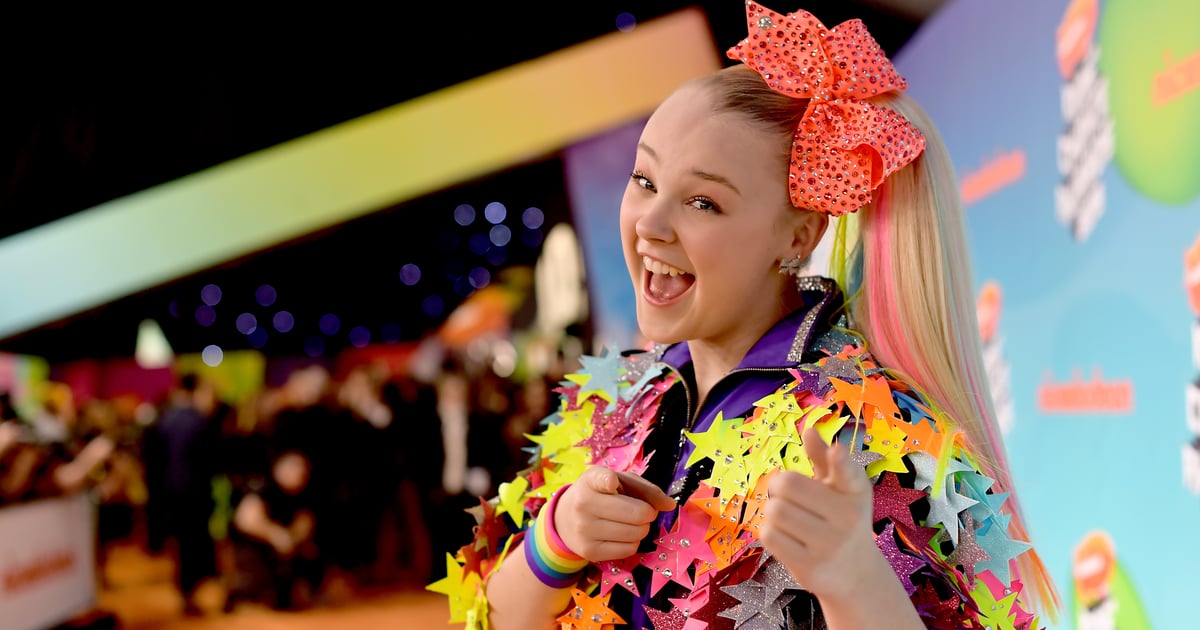 JoJo Siwa Has Never Been Happier Than She Is Living Her Truth: “I Am So Proud to Be Me” 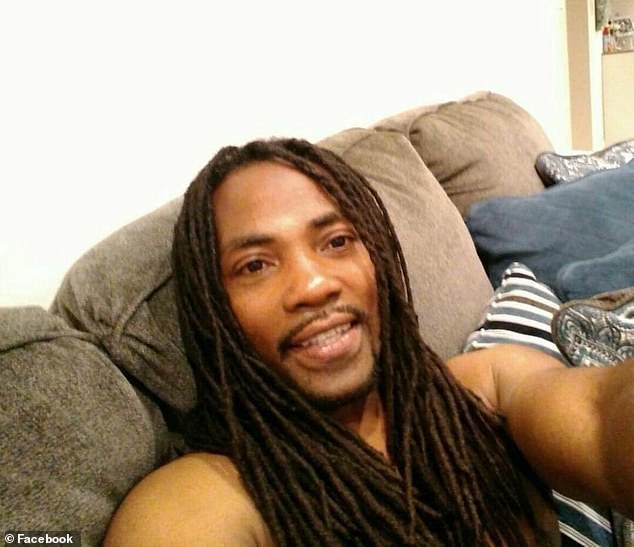 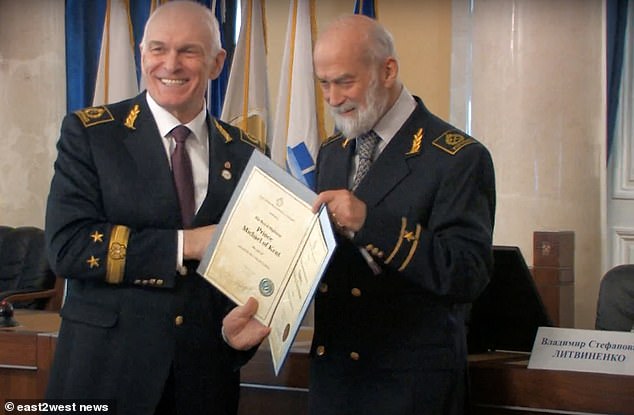