The bride wore ripped jeans and a midriff-exposing crop-top. The only white she wore was the baseball cap on her head. The groom, equally scruffy, was in denim, too, and looked bleary-eyed from days of partying.

When Britney Spears married her childhood sweetheart Jason Alexander in a 5.30am ceremony in Las Vegas in 2004, it became a global joke because the marriage lasted only two days.

For it took just 55 hours for the young superstar’s high-powered legal team to force an annulment to protect her image at the peak of her fame following the phenomenal success of her album Toxic.

Jason was duly dumped – now a mere footnote in the turbulent ups-and-downs of the never-ending Britney melodrama.

But today, with the 39-year-old pop star’s life and finances under the draconian control of her father and the American court system, her ex-husband believes what he calls the ‘destruction’ of their marriage should have been taken more seriously, as it was a portent of darker things to come.

Jason Alexander (right) with Britney at their Las Vegas wedding in 2004, which would end in an annulment just two days later 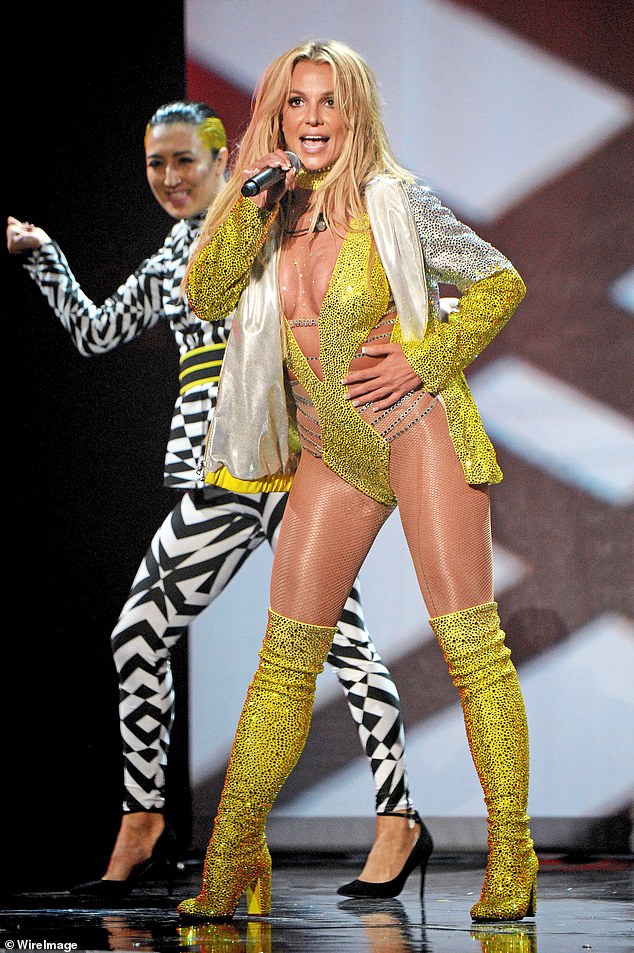 Britney was married to Jason Alexander, who had been her childhood sweetheart, for just 55 hours back in 2004 (Pictured: Spears performing her single ‘Make Me…’ from her most recent album Glory at the MTV Music Video Awards in 2016)

He claims that the ‘controlling forces’ currently massed around Britney had their grip on her even back then.

Four years later the singer became the subject of a strict ‘conservatorship’ order. Since 2008, her father Jamie has been given control of everything – from her £36 million fortune to the most intimate aspects of her life, including the implantation of a birth control device to prevent her having any more children.

‘What they did to Britney and me should have rung warning bells,’ says Jason, 39.

‘The men in black swooped in, along with her mum and other family members, and they made us sign paperwork under duress to end our marriage. We didn’t want to annul it. They lied to us. It was always about controlling Britney and controlling her money.

‘She’s been living a nightmare far worse than anyone can imagine for far longer than people realise.’

For the past year, the showbiz world has watched the backlash with the Free Britney movement, a campaign started by her fans to help her break free from the conservatorship she likens to prison.

In dramatic courtroom testimony last month, the mother-of-two, who shot to global superstardom as a teenager with hits such as Baby One More Time, described her life as being akin to that of a ‘sex slave’, drugged and forced to perform against her will. 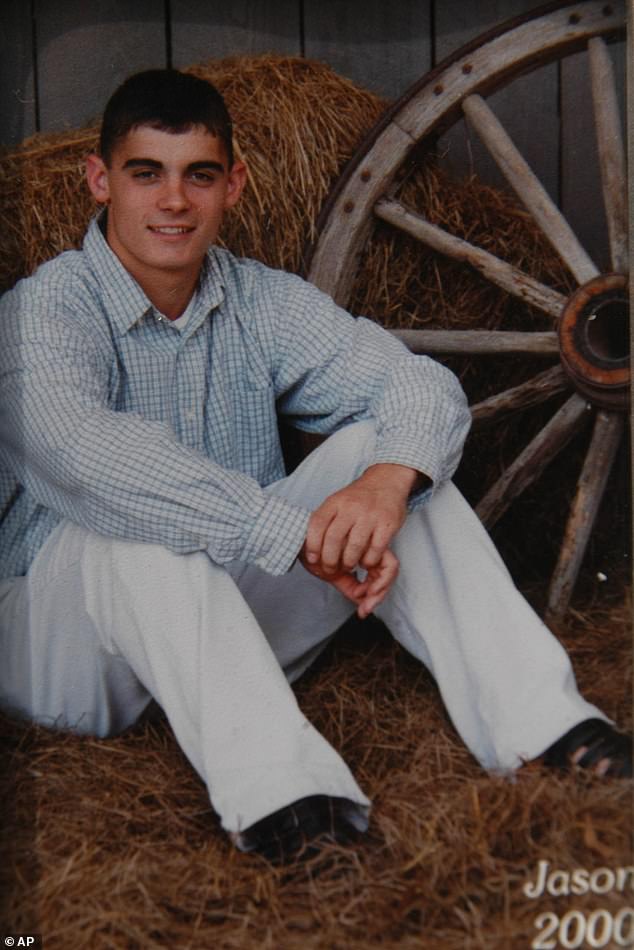 Alexander grew up with Britney in Kentwood, Louisiana, and said that he was ‘duped’ into agreeing to an annulment and misguidedly thought that he and Britney still had a future 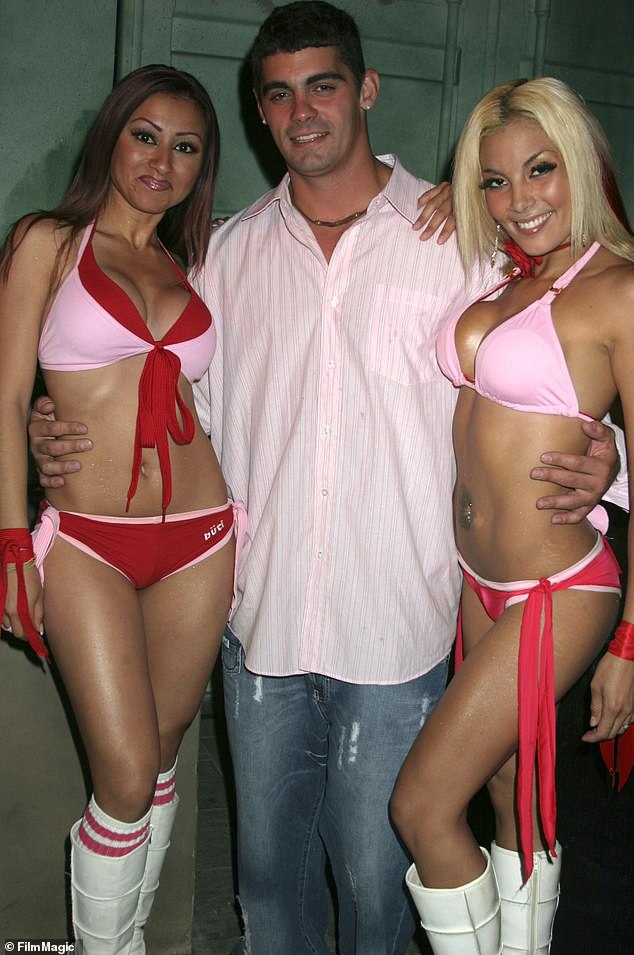 ‘My dad and anyone involved in this conservatorship, and my management who played a huge role… they should be in jail,’ she said.

But Jason says the warning signs were there in 2004 as her wealth and fame were burgeoning.

‘I was tricked by her mum, dad and lawyers into signing the annulment,’ he claims. ‘I was told our marriage could hurt Britney’s career. I loved her and was a naive kid who had been raised to trust and respect my elders, just like she had.

‘We were told that if we still felt the same way about each other in six months, then we could have a big, white wedding. They strung me along for 30 days, which was how long it took to get the annulment finalised, so I couldn’t contest it, and then they changed Britney’s number so I couldn’t talk to her. There have always been dark forces in her life.’

At the time, the PR team acting for the then 22-year-old singer put out a statement saying: ‘Britney and a friend took a joke too far.’

In fact, says Jason, their romance was genuine and developed from a friendship which began when they were both aged five. 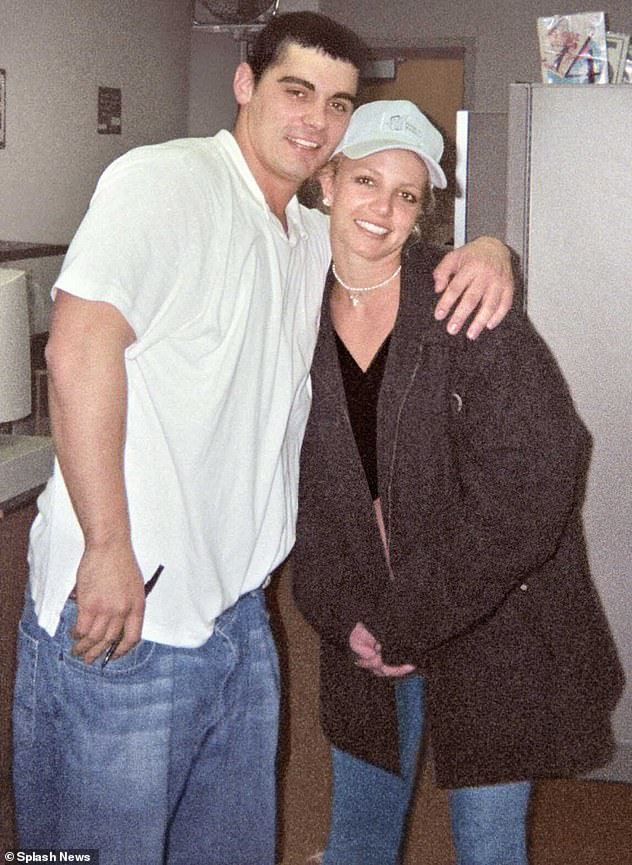 Britney’s PR team acting for the then 22-year-old singer put out a statement saying: ‘Britney and a friend took a joke too far’ after she wed Jason (pictured) at a chapel in Vegas 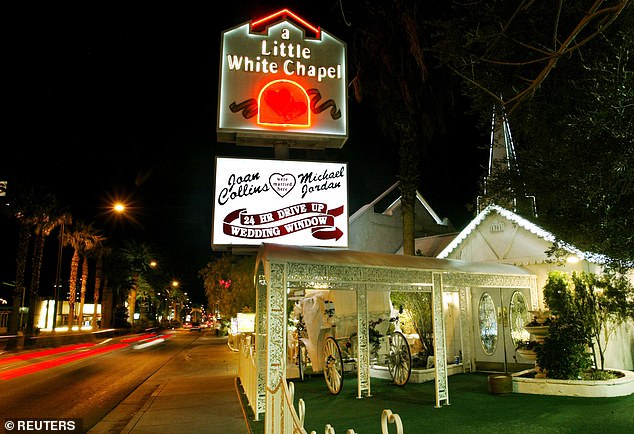 The Little White Chapel in Las Vegas, Nevada, where the couple got married back in 2004

Jason, now a businessman, speaks in the soft drawl of Louisiana. He and Britney grew up in Kentwood, a small town with a population of just 2,200, and met when he attended a kindergarten run by Britney’s mother Lynne.

‘We always had feelings for each other. Even as a child you know what love is – an obsession, a butterfly feeling,’ he says. ‘As we got older, those feelings turned physical.’

Jason, a 6ft 1in American football star as a young man, does not remember a time when Britney wasn’t performing.

‘She was always singing and dancing. When we were small, my mum put me in modelling pageants and Britney would always be at those kinds of events, singing.’

Even after Britney left Kentwood to launch her career, first as a member of the Disney TV show The All New Mickey Mouse Club (alongside Justin Timberlake and Christina Aguilera) and then as a solo performer, she would return home for holidays.

Then, she and Jason would resume their romance. ‘It was periodic but consistent. I was in love with Britney before she was Britney Spears,’ says Jason. ‘Her family were like my family. We’d spend holidays together. The feelings were always there between us.’

So when Britney completed her fourth album, In The Zone, and was preparing for a global tour, she invited Jason to celebrate New Year’s Eve with her in a spectacular suite at The Palms Hotel, Las Vegas, where she was checked in under the pseudonym Alotta Warmheart.

She dispatched her private jet to collect him and they spent three days drinking and making love. 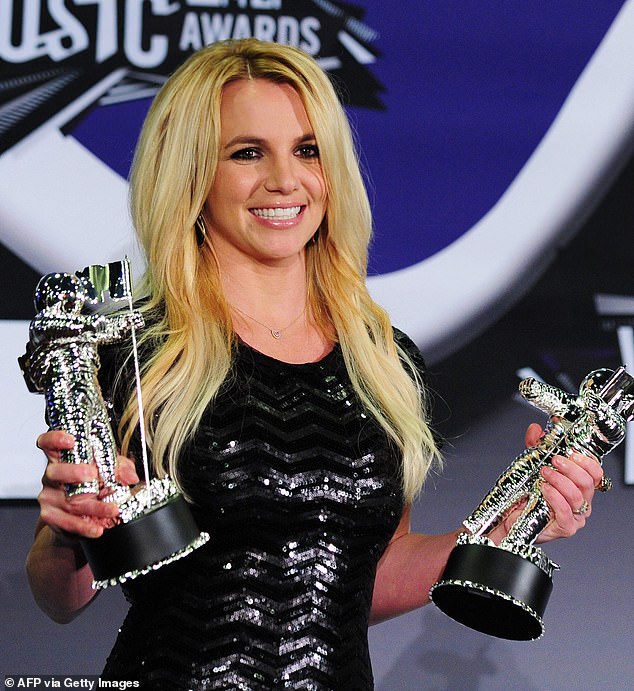 ‘It was intense,’ Jason recalls. ‘It was 5am and we were in bed talking and she asked me to go on tour with her. I told her I couldn’t. I was at college on a football scholarship. Then she asked me to get married.

‘We felt like this was a way we could be together. Britney was already feeling trapped, with everyone making money out of her.

‘We figured that if we were married, they would have to let us see each other.’

Jason says Britney had an armed bodyguard outside her suite but he deliberately went missing in the early hours of January 3. The couple sneaked out and rented a lime-green limousine to go to The Little White Wedding Chapel on the Vegas Strip.

Told that they needed a licence to marry, Britney and Jason asked the driver to take them to a local courthouse which, Vegas being Vegas, was also open around the clock.

Jason recalls: ‘We lined up with other couples, even though it was five in the morning, and people started recognising Britney and taking her picture.

‘Then we went back to the chapel and the limo driver walked her down the aisle.

‘Britney didn’t have any cash – even back then they didn’t give her access to her money. So I paid for the wedding, photos and video.’

Another couple asked for a photo – it is the only picture of Britney’s wedding that exists. ‘The men in suits confiscated the rest,’ Jason says. ‘I was told that couple made $100,000 selling that picture. I always thought that was a nice wedding present to give them. 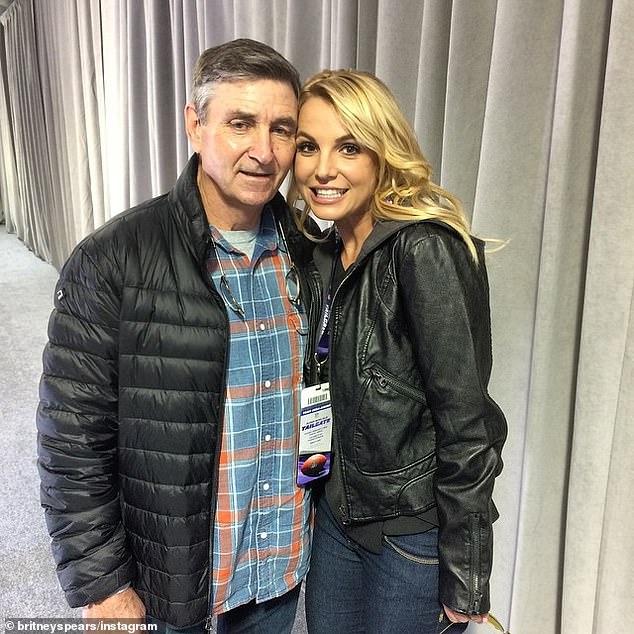 Britney with her dad Jamie Spears, who Jason says forced him, along with others, to end marriage with megastar (Pictured: photo Britney posted to Instagram in June 2015, she wrote alongside the snap: ‘Happy Father’s Day, daddy! I Love you!’) 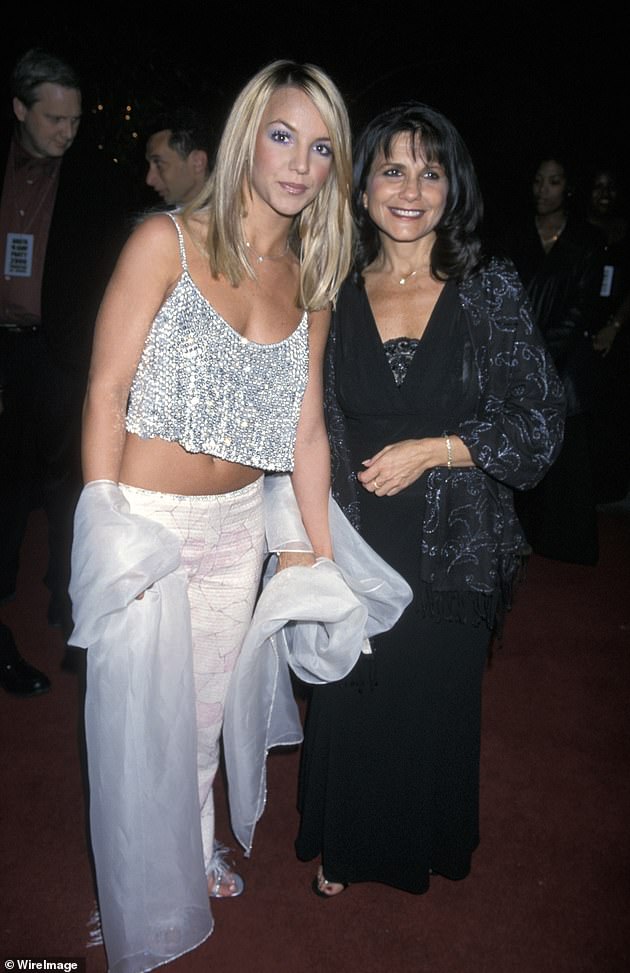 ‘We were on a high. We consummated the marriage in the limo on the way back to the hotel.’

But once they shared the happy news, Jason says ‘the s*** hit the fan’. Within hours, Britney’s mother – and those ‘men in black’– descended on the suite.

‘There were lawyers, publicity people and the management people. They were all in dark suits and sunglasses. They took Britney in one room and put me in another, like a police interrogation.

‘When she came out, she was a different person. It was like they’d hypnotised her or something.

‘Then they started putting all this paperwork in front of us to sign.

‘I trusted them. I was a naive kid. I thought I was doing the best thing for Britney. She and I had planned to go on honeymoon to Belize and she wanted to go straight after the ceremony. Looking back, I wish I hadn’t been so dumb. I wish we had gone.’

Once the paperwork was signed, the family went to a steakhouse.

Jason says: ‘We’d just sat down when Britney’s brother, Bryan, came over with the confirmation number for a plane reservation for me written on a bar napkin.

‘I had to go to the airport right away. I didn’t even get to eat.

‘I’d arrived in Las Vegas on Britney’s private jet – and I left in economy class.’

Jason believes the wedding marked a seismic shift in the way Team Britney viewed their most precious asset.

‘If she could rebel and sneak off to get married, they didn’t have enough control. That’s when they started really getting tough on her. She was put into a gilded prison.’

Eight months later, she married back-up dancer Kevin Federline. They had two sons, later divorced and she began her public battles with drugs and breakdowns.

She shaved her head, attacked paparazzi with a golf club and ended up being held in psychiatric care in a Los Angeles hospital after which her father applied for – and was granted – the 2008 conservatorship order which remains in place to this day.

Jason says: ‘If we had stayed married, I’d like to think things would have turned out differently. I wanted to protect Britney. I loved her.’ 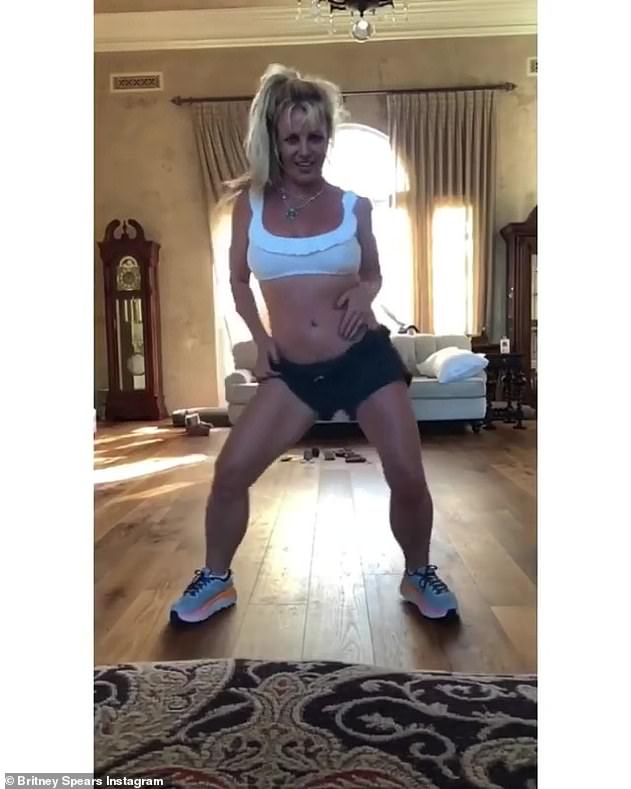 Britney regularly posts dancing videos to her Instagram page, which she uses to talk to her army of fans 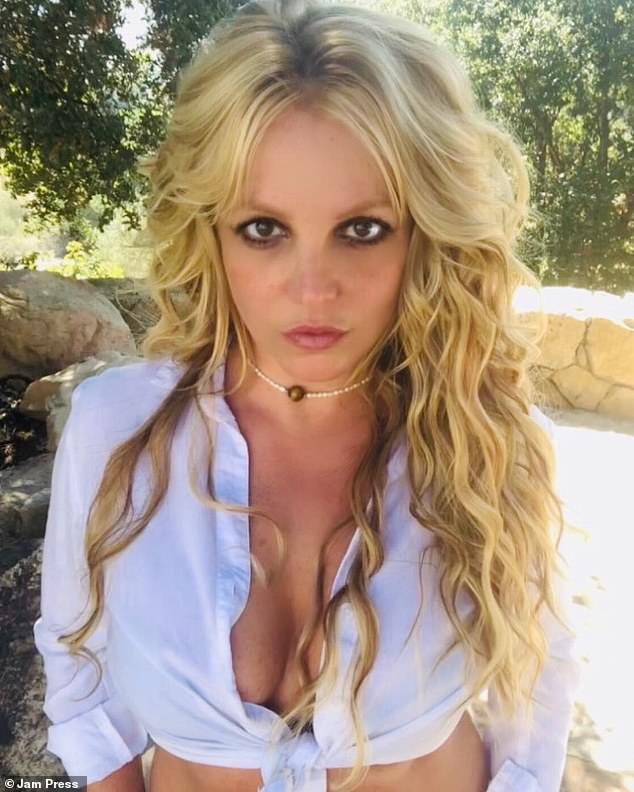 His own life was changed dramatically, too. Nursing a broken heart, he dropped out of college and abandoned plans to become a professional American football player. ‘It was emotionally devastating. Her people made me out to be a joke. Everywhere I went, I was the dude who’d been married to Britney Spears for 55 hours.’

He moved to Los Angeles, dabbled in acting and mixed martial arts, and founded a medical marijuana business. Later he moved back to Louisiana and worked in oil until the pandemic struck.

He has never been able to escape Britney’s shadow, he says, and claims lucrative business opportunities have been crushed by the star’s legal team over the years.

‘I was offered a book deal but then got a legal letter saying that one of the papers I’d signed for them forbade me from writing the book. Her lawyers threatened me every time I wanted to talk publicly.’ Jason says hearing Britney plead her case in court last month was deeply moving.

‘When she made that speech to the court, I broke down,’ he adds. ‘Hearing her put her side of things, arguing to get her life back, it was raw and powerful. She’s waited 13 years to say those words.’

‘She knows how I feel. When we talk, I tell her.

‘My only regret is that I couldn’t do more to protect her.

‘I hope she gets her freedom soon and can live her life the way she wants to.

‘All I have ever wanted is for Britney to be happy. I’ll never stop loving her.’ 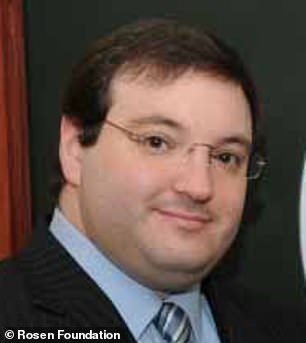 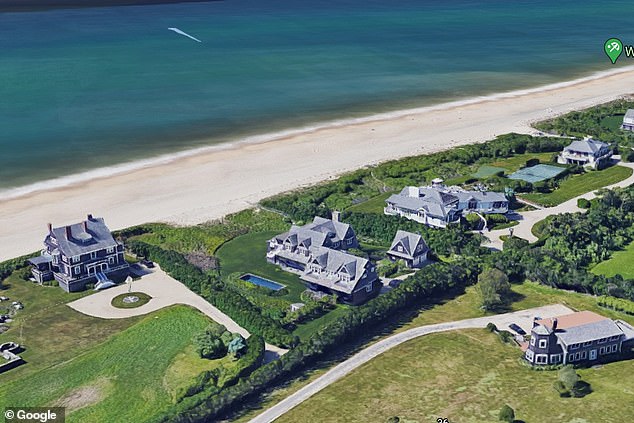 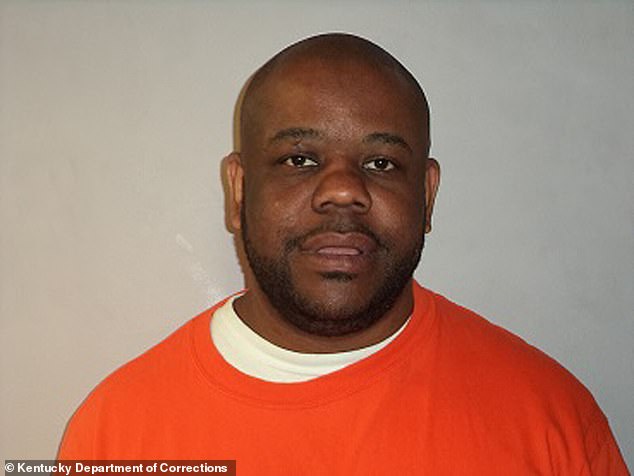 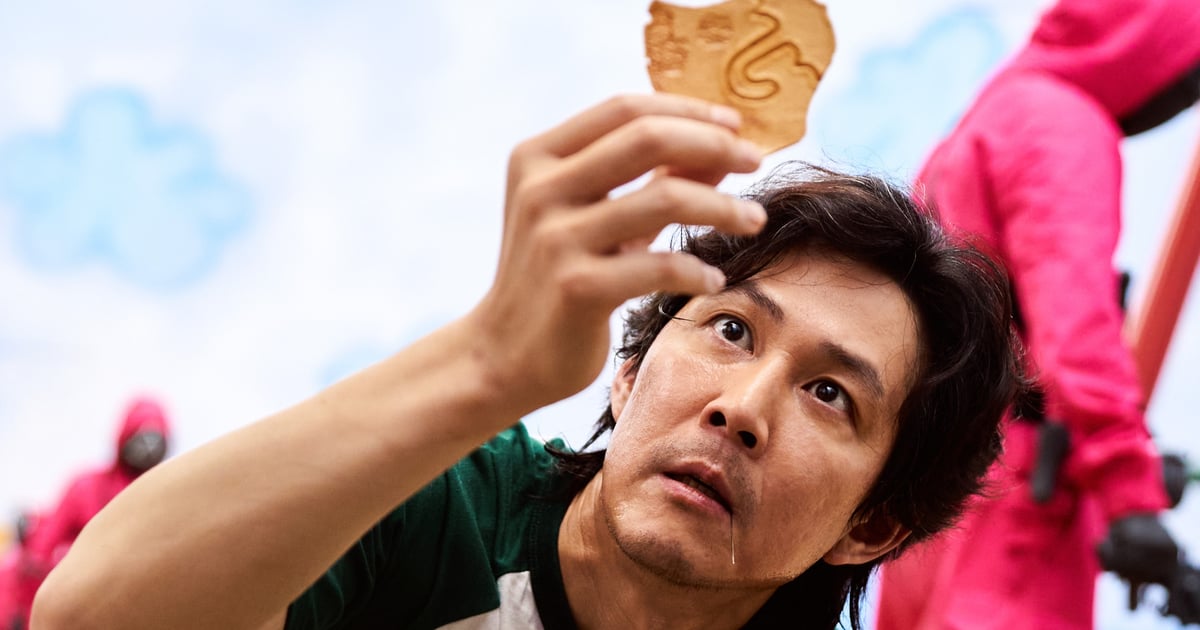 Squid Game Got the Green Light For Season 2; Here’s Everything We Know About It