The black Ohio police officer who received Ku Klux Klan notes from his white boss has filed a discrimination charge against his employer.

Officer Keith Pool filed a the charge – an initial step for preparing a lawsuit – with the Ohio Civil Rights Commission on Thursday alleging that former Sheffield Lake Police Chief Anthony Campo harassed him on an ‘ongoing basis’ because of his race and that other superior officers with knowledge of the incidents refused to step in.

Pool alleges that Campo created ‘racially offensive images mocking me’ and then shared them with other employees and on department bulletin boards, citing one image where his face was photoshopped on the Grim Reaper’s body that Campo captioned ‘the raccoon reaper’.

Campo stepped retired over the summer after he was caught on surveillance video placing a small note reading ‘Ku Klux Klan’ over the ‘police’ label on a raincoat that was on Pool’s desk.

The former police chief also made a ‘pointy Ku Klux Klan hat’ and wore it in front of Pool and other employees, the complaint states. Campo also told Pool he had to wear the hat during his shift.

In addition to the discrimination charge, Pool’s attorneys have filed a petition with the Ohio Supreme Court compelling the Cleveland-suburb police department to provide public records that they say will demonstrate Campo’s alleged pattern of race-based harassment. 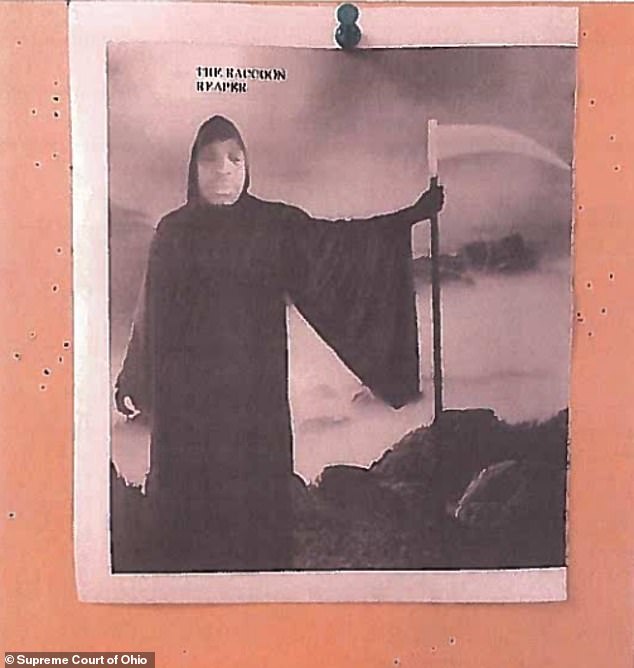 Pool alleges that Campo created ‘racially offensive images mocking me’ and then shared them with other employees and on department bulletin boards, citing one image where his face was photoshopped on the Grim Reaper’s body that Campo captioned ‘the raccoon reaper’

On July 25, 2021, Campo was recorded placing the KKK note and hat on Pool’s raincoat.

The video from the Sheffield Lake police station, which did not include sound, shows Campo standing at a department printer, then carrying the note over and deliberately placing it on the jacket.

When the officer entered the room and sees the display, he looks in the direction of Campo’s office. Video then shows the two talking briefly.

Pool removes the note from the coat, but then puts it back to show two of his colleagues, both white.

‘It was not funny to them,’ Pool told NBC News Thursday – the first time he has ever spoken publicly about the surveillance footage and alleged harassment.

‘They walked away from it.’

He added: ‘It was so demeaning. It was so disrespectful to me.’ 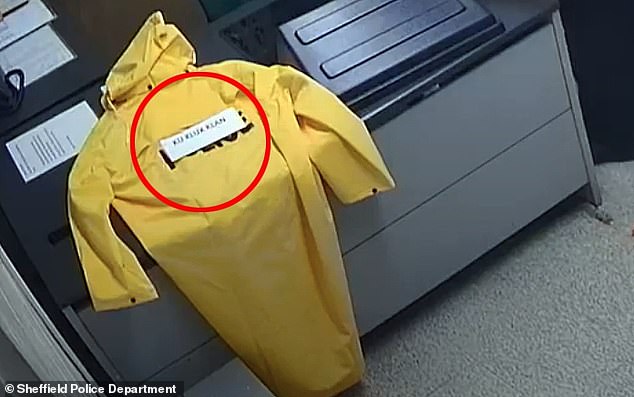 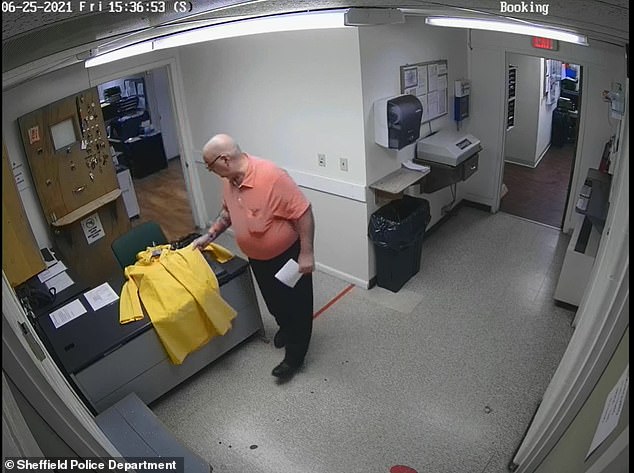 Video from June 25 shows Campo, seen in an orange shirt, printing the note and placing it on Pool’s police raincoat 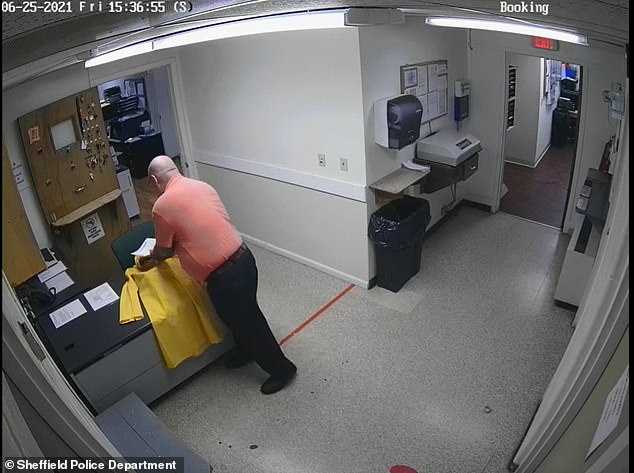 Pool, who had been with the department for just nine months at the time, was away from his desk at the time

At the time of the incident, Campo told Sheffield Lake Mayor Dennis Bring said Campo, it was supposed to be a prank. Bring called it ’embarrassing and disgusting.’

Meanwhile, Pool’s attorney Ashlie Case Sletvold released the following statement to DailyMail.com Thursday: ‘The brave men and women like Officer Pool who put their lives on the line every day to protect our communities should not have to endure racial harassment at work.

‘We will hold the City, its officials, and the former chief accountable for this shocking misconduct.’

Pool, 57, was hired with Sheffield Lake police in September 2020 after having been courted by Mayor Bring in 2019. He was the first black officer to be hired with the department, which has 14 officers.

‘There was no African Americans applying there,’ Pool said. 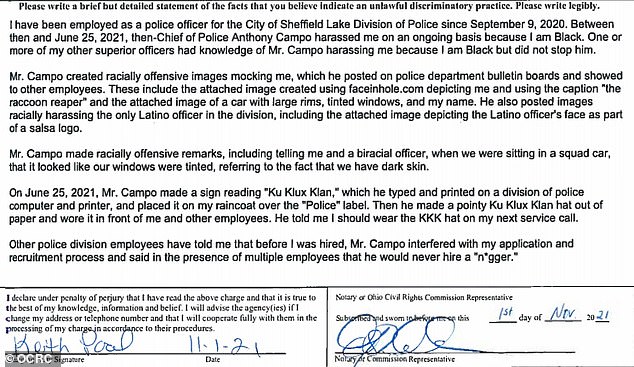 However, he claims Campo originally tried blocking his employment.

‘He told a detective ‘absolutely not,” Pool explained. ‘He didn’t want me over there in the first place.’

The officer also alleges that Campo’s racially-based targeting began before his first day on the force.

‘Other police division employees have told me that before I was hired, Mr. Campo interfered with my application and recruitment process and said in the presence of multiple employees that he would never ‘hire a n****r,” Pool wrote in the discrimination complaint.

Then upon his hiring, Campo sent him a photo of a vehicle with 20-inch wheel rims and tinted windows instead of a photo of his new squad car, according to Pool.

‘It said ‘Officer Pool, SRO,’ he told the news outlet. ‘It threw me. What is he talking about? What is this about?’ 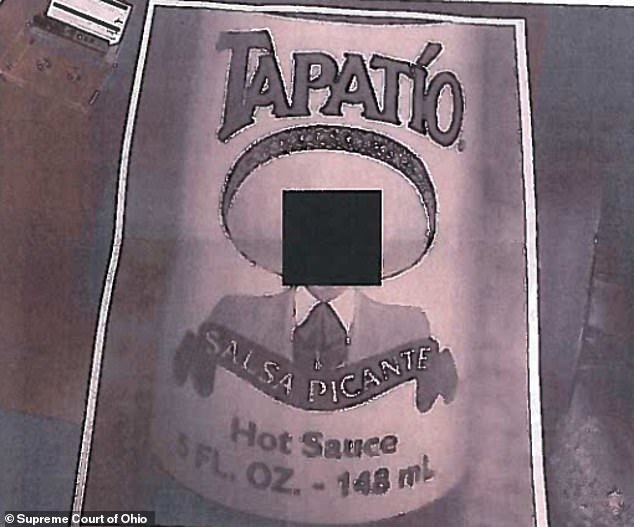 The complaint also claims that Campo targeted the division’s only Latino officer, citing an instance where he attached a image of the officer’s face to a salsa logo

He then received the ‘raccoon reaper’ note around Halloween, the officer alleges.

‘I didn’t understand that either,’ he said.

Pool claims that Campo also targeted the second black officer hired at the department when the pair was sitting in a patrol car.

Campo allegedly approached them and said, according to Pool: ‘It looked like y’all’s windows are tinted.’

‘The windows were open,’ Pool explained.

The complaint also claims that Campo targeted the division’s only Latino officer, citing an instance where he attached a image of the officer’s face to a salsa logo.

Additionally, Pool claims that several department members knew about the alleged harassment and failed to intervene.

‘A lot of people knew about him,’ Pool said. ‘Nothing was done.’

The City of Sheffield Lake did not immediately respond to DailyMail.com’s request for comment. 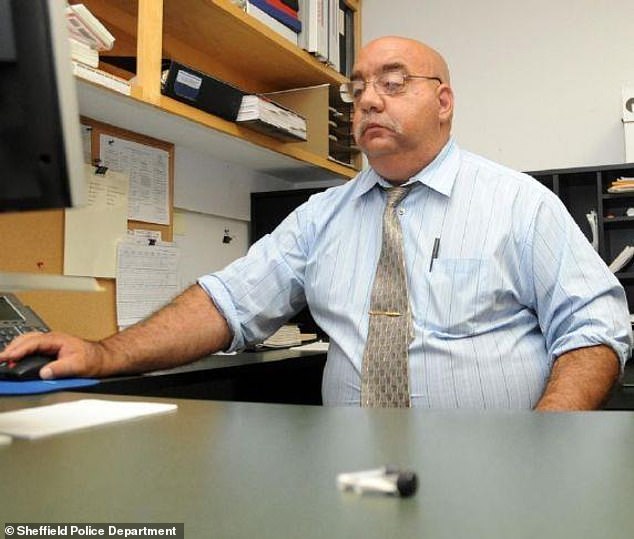 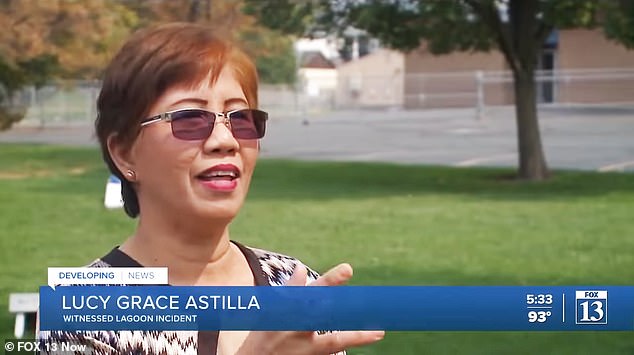 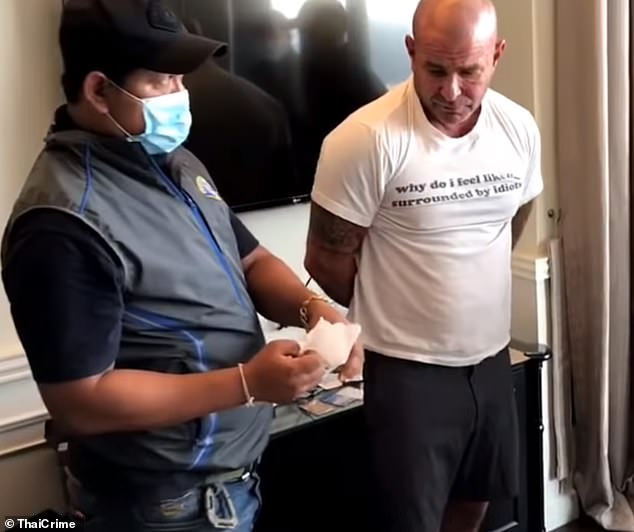 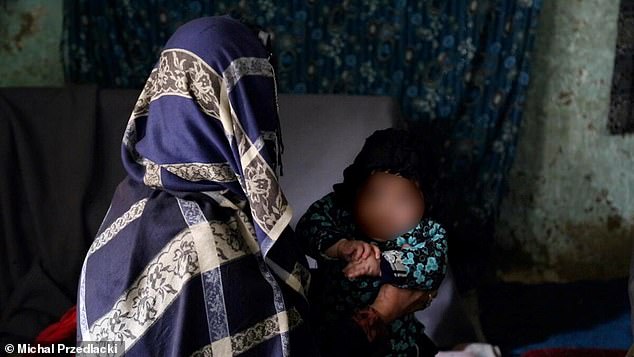 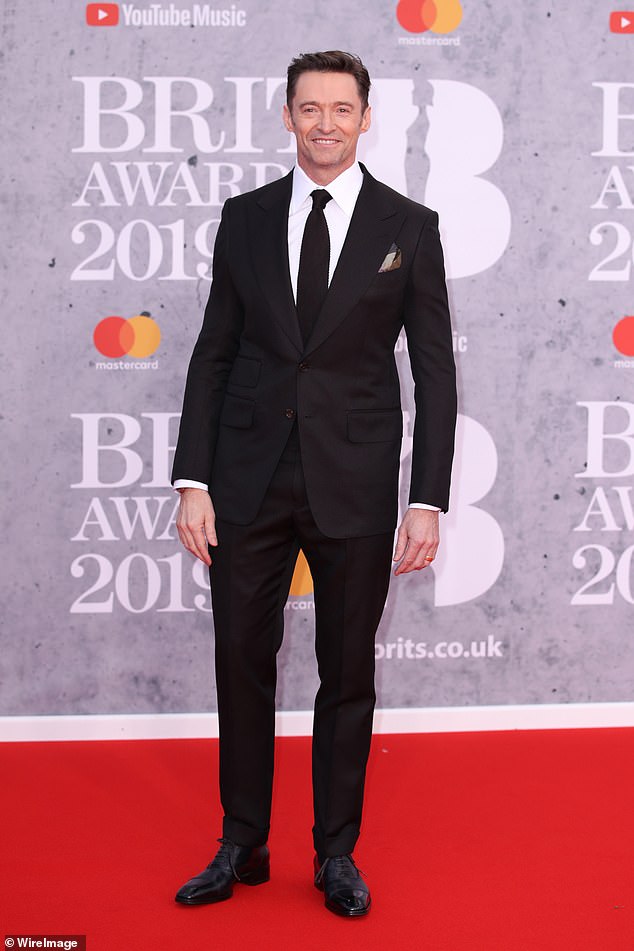 Mother-of-one, 20, attacked by crowd in Delhi, India after being gang raped and tortured [Video]
38 mins ago

Britney Spears’s Spitfire Spirit, Explained by an Astrologer
57 mins ago