President Joe Biden called for extended paths of citizenship on Friday, which could add another 9 million people to the US population, at a naturalization ceremony that took place in the East Room of the White House.

There were 21 people who took the citizenship oath at the White House, which was administered by Homeland Security Secretary Alejandro Mayorkas. Mayorkas immigrated from Cuba as a child. They cheered after they became Americans and waved small American flags.

Biden used the occasion to call for citizenship for immigrants who were brought to the U.S. illegally as children – the so-called Dreamers, for foreign-born people who have temporary protected status due to strife in their birth countries, and for farm workers.

‘We can work together on critical issues as well pathway to citizenship for Dreamers, young people,’ he said, and for those ‘who are here on temporary protected status. … And a pathway for farmworkers.’

‘We need an immigration system both reflects our values and upholds our laws. We can do both,’ the president added.

He also recognized Sandra Lindsay as an ‘Outstanding American by Choice.’ 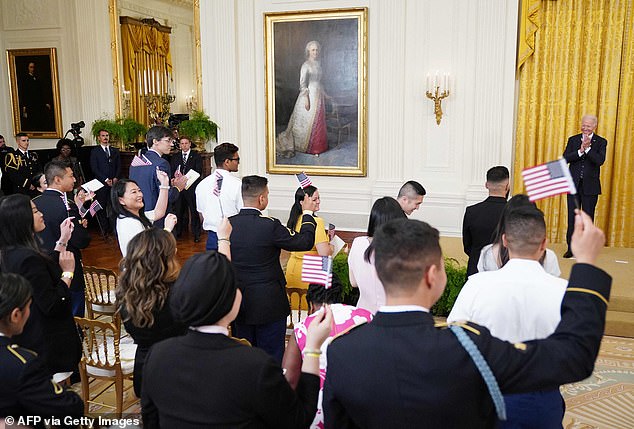 Biden said she ‘poured her heart and soul into the work’ of saving COVID-19 patients.

Lindsay, who emigrated to Queens, New York from Jamaica, is believed to be the first American to be vaccinated against COVID-19 outside of a clinical trial. She is the director of nursing for critical care at Northwell Health’s Long Island Jewish Medical Center in Queens, New York.

Her scrubs, vaccination card and hospital badge will be included in the Smithsonian’s National Museum American History Center.

Biden’s call for more paths to citizenship is part of an unprecedented effort by the administration to encourage eligible immigrants to apply for US citizenship.

‘The idea is to find a whole-of-government way to reach out to people who are able to naturalize,’ a Citizenship and Immigration Services official told CNN, adding that there are 9 million people in the US who are lawful permanent residents who may be eligible to apply for citizenship.

Immigration has been a political flashpoint as Biden has sought to renew visa and refugee programs that were cut or suspended during the Trump administration.

Biden has overturned some changes Trump made to the process for becoming a citizen, including removing changes made to the citizenship test.

In February, Biden and congressional Democrats proposed a major immigration overhaul that included an eight-year pathway to citizenship for the roughly 11 million people living in the United States illegally. Republican lawmakers blocked the effort and have criticized the administration for the rise in people attempting to cross the southern border without visas. 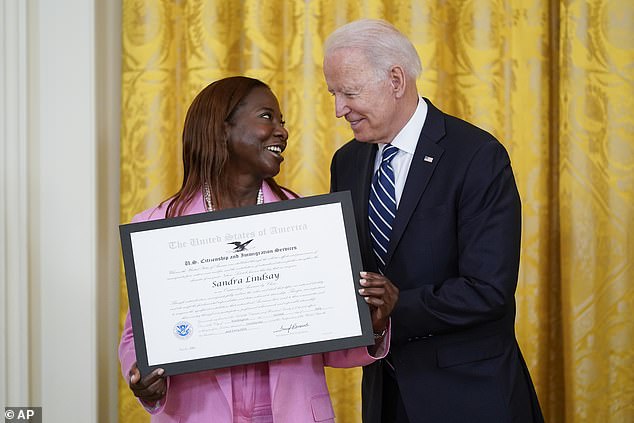 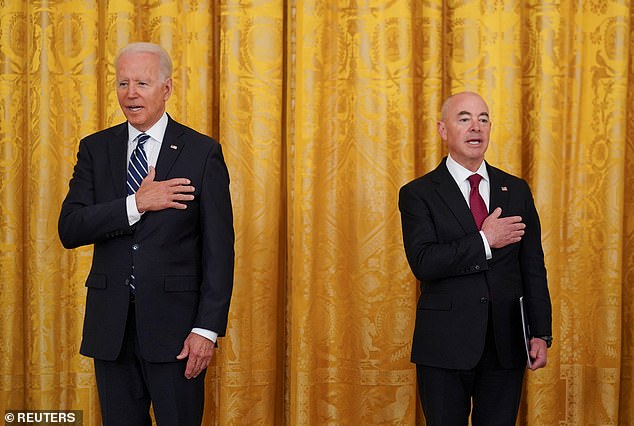 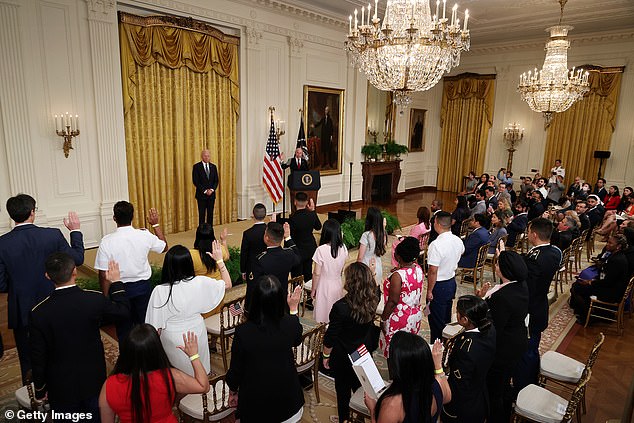 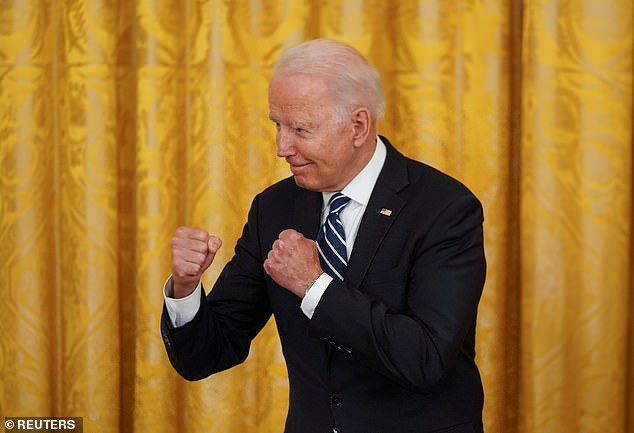 Republican lawmakers seeking to limit immigration say it will help keep the U.S. safe and protect jobs for native-born citizens. But economists – many associated with Democrats – say increased immigration would boost economic growth that is currently weighed down by falling fertility rates.

Friday’s ceremony is among more than 100 such ceremonies scheduled between June 30 and July 7 to welcome more than 9,400 new citizens. 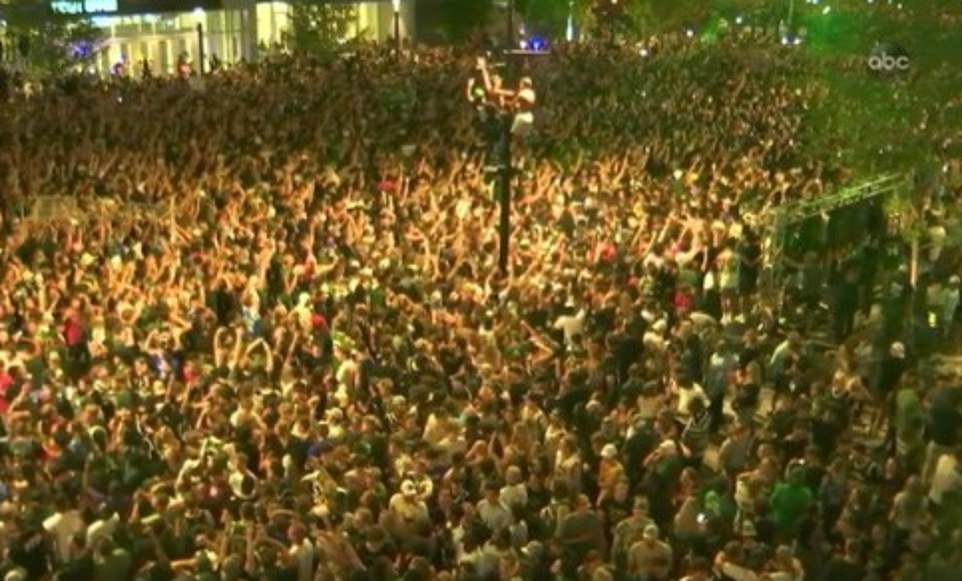 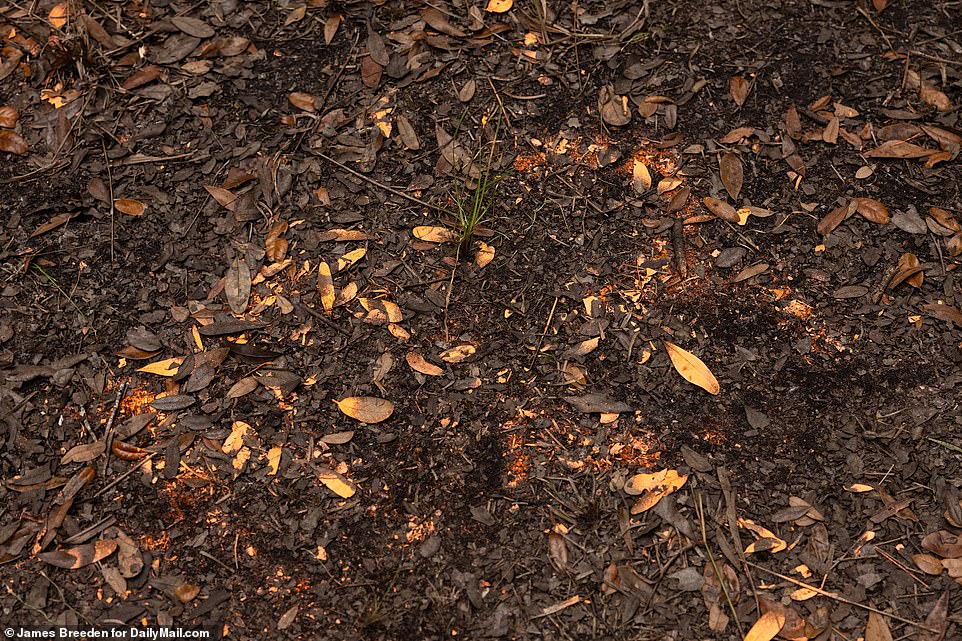 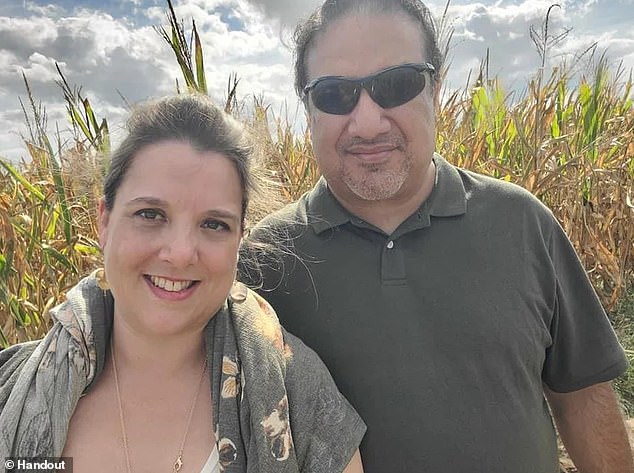