President Joe Biden used his speech at the Pfizer facility in Michigan Friday to put some heat on Congressional Republicans who don’t want to spend $1.9 trillion on COVID-19 relief.

‘I’m grateful that the Senate and the House are moving quickly,’ Biden said. ‘And I’m prepared to hear their ideas on how to make the package better and make it cheaper. I’m open to that.’

Biden touted that the plan could create 7 million jobs this year, and then asked GOP lawmakers what they would cut from the ambitious package that they think is ‘too big.’ 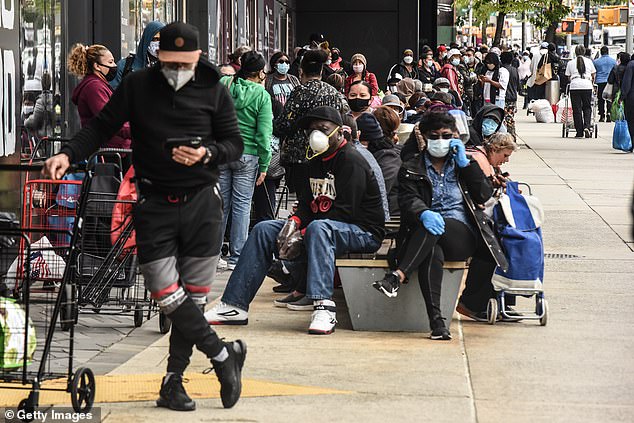 When asking Republicans what they might cut from his $1.9 trillion COVID-19 relief package, Biden recalled the images of long lines, like this one in New York City, for food assistance

‘Should we not invest $50 billion to help small businesses stay open when tens of thousands have had to close permanently?’ he asked.

What about schools, Biden pondered, pointing out that the plan calls for $130 million to go toward schools opening safely.

‘Unless you think I’m exaggerating, think of those scenes you’ve seen on the television, with cars lined up that seemed like miles to wait to have someone put a box of food in their trunk,’ Biden said. ‘People who never ever ever ever ever thought they would need help.’ 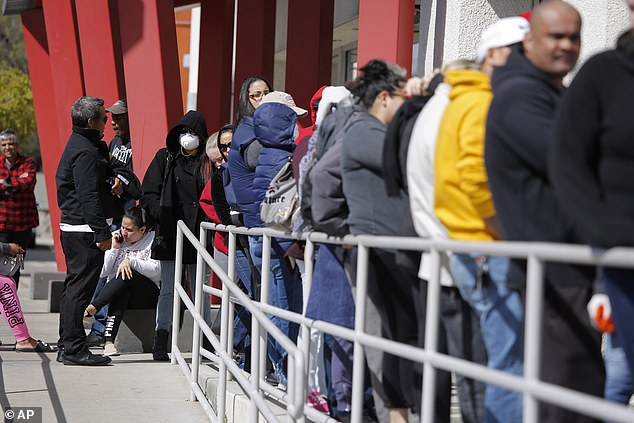 Biden offered to make his $1.9 trillion COVID-19 relief bill ‘cheaper’ but asked Republicans what assistance they wanted to leave out, using unmployment insurance as an example. In March 2020, this crowd gathered in Las Vegas for help with unemployment benefits

He said if his American rescue plan isn’t passed, 40 millin Americans were in danger of losing their SNAP benefits.

‘Can we not invest $3 billion to help families from going hungry?’ the president mused.

Biden also stated the stat that one in five Americans are behind in their rent and one in 10 are behind on mortgages.

‘This is the United States of America, for God sake. We invest in people. Who are in need,’ he said. ‘Can we not invest $35 billion to help people keep a roof over their heads?’

‘I could go on,’ Biden said after going on for quite a bit. ‘But you get the point.’

Biden and Congressional Democrats are poised to use reconciliation to get the COVID-19 package through the Senate, which would allow a simple majority vote instead of the 60 to break a filibuster.

But still, Biden has actively been seeking Republican support.

‘My hope is that the Republicans in Congress listen to their constituents,’ he said at the Pfizer plant Friday.

‘According to the polls, there is overwhelming bipartisan support. The vast majority of the American people, more than 70 per cent of the American people, with all the polls ya’ll conduct,’ he said, making a nod at the reporters in the room. ‘Including a majority of Republicans, want us to act and act big and quickly and support the plan,’ he said. 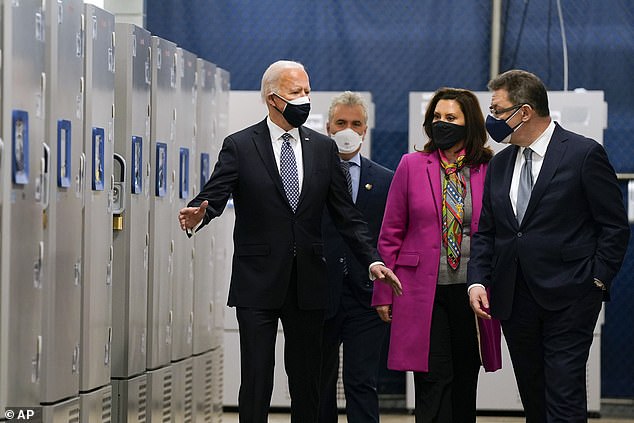 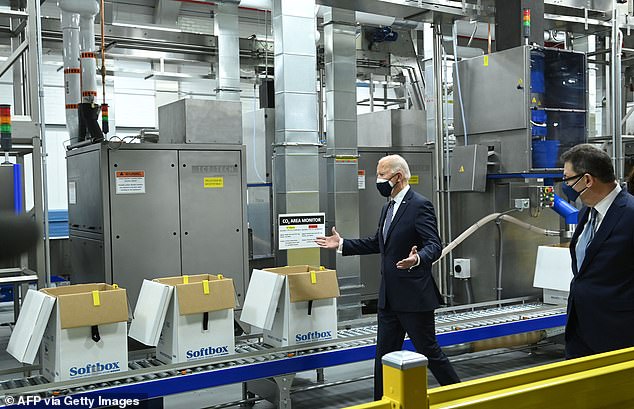 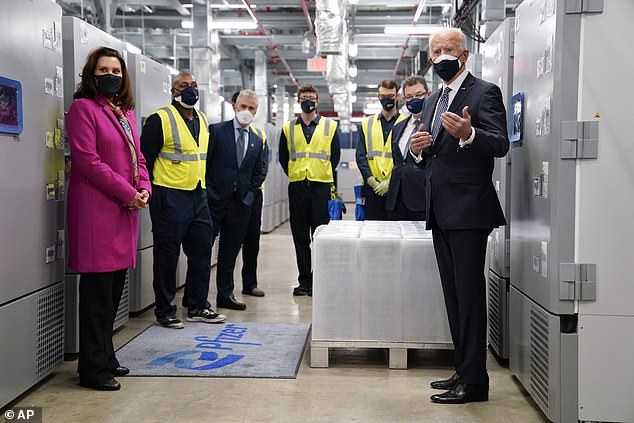 Bourla announced at the top of the president’s remarks that Pfizer would be more than doubling their production capacity in the next couple of weeks, from the current average of 5 million doses per week.

‘We are on track to provide the U.S. government, a total of 120 million doses by the end of March and to reach 200 million doses released by the end of May, two months ahead of the original schedule of that milestone,’ Bourla said. ‘Of course today during this meeting the president challenged us to identify additional ways in which his administration could help us potentially accelerate even further the delivery of the full 300 million doses earlier than July.’

When it was the president’s turn to speak, he continued to slap around his predecessor, President Donald Trump.

‘My predecessor, as my mother would say, God love em’, failed to order enough vaccines, failed to mobilize the effort to administer the shots, failed to set up vaccine centers,’ Biden said.

He also remarked, ‘You can’t build a wall or a fence high enough to keep a pandemic out,’ another brief slap at the ex-president.

Biden pledged that his new administration was doing everything in its power to get the U.S out of the coronavirus pandemic.

‘I can’t give you a date when this crisis will end. But I can tell you we are doing everything possible to ahve that day come sooner rather than later,’ Biden said a day shy of being in office for a month.

He joked during his remarks that it felt like ‘100 days,’ as he reiterated his pledge to get 100 million doses of vaccine administered in his first 100 days.

Later, he estimated that the country could be out of the pandemic by the end of the year.

‘I believe we will be approaching normalcy by the end of the year. God willing, this Christmas will be different than the last,’ he said. ‘But I can’t make that commitment to you,’ he also said.

Biden, who spoke to a number of Pfizer workers as he toured the plant, talked how ‘personal’ that pandemic is, as one of them expressed that a father-in-law was dying of COVID. The president said he offered to make a call, but the ailing patient wouldn’t have heard it.

‘That is almost 70,000 more than all the Americans who died in World War II over a four year period,’ Biden noted. ‘All the sorrow, all the heartache, all the pain.’

‘Lookl I know it’s inconvenient, but you’re making a difference when you do it,’ the president encouraged. ‘Everything we do matters. We need everyone to do their part for themselves, for their loved ones and yes, for your country.’ 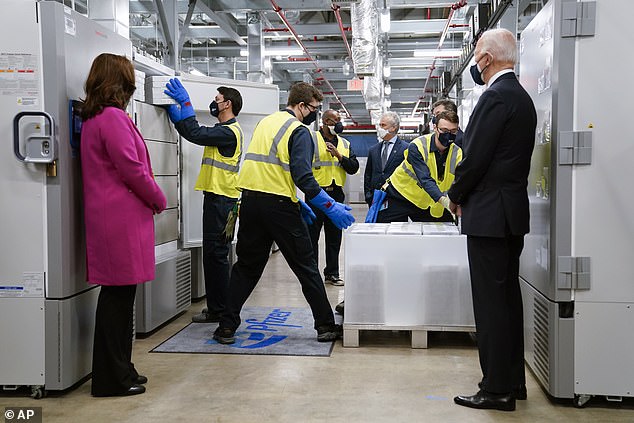 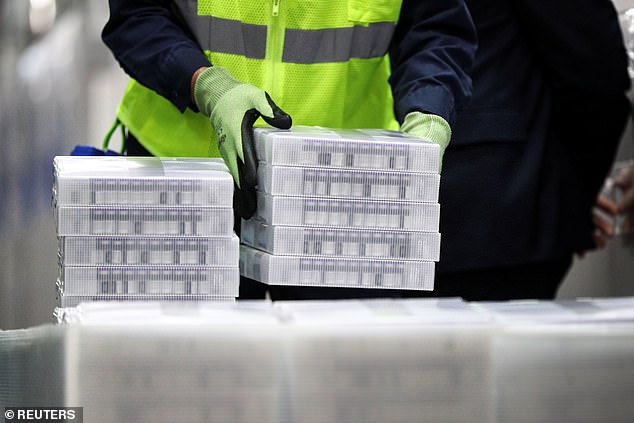 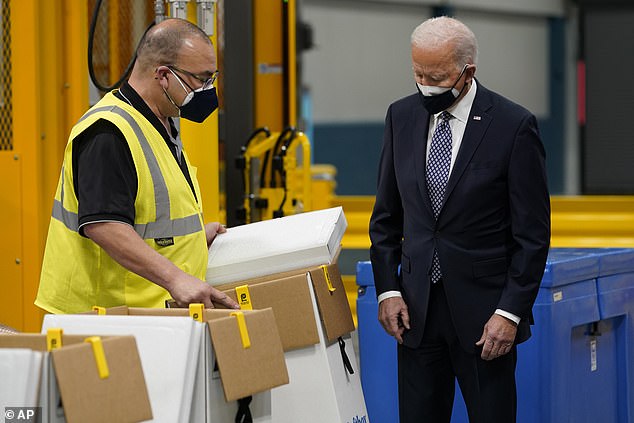 Snow in Washington prevented the Michigan trip from happening Thursday, so it was rescheduled for a day later, as weather was also responsible for some vaccine delays.

On the way there, White House press secretary Jen Psask said that at the Pfizer facility ‘President Biden will see where much of the nation’s COVID-19 vaccine is being manufactured.’

‘He will meet with those on the frontlines producing these vaccines and get an update on how his administration is working with them to increase output,’ Psaki added.

The press secretary also suggested that the administration would be able to play catch-up and recover from the weather delays.

She told reporters that the goal is to ‘get the backlog of vaccines out next week.’

‘We anticipate we can not only get the backlog out but we can stay on pace with what we are planning to distribute to States next week,’ she said. ‘So we are expecting we are going to be able to catch up next week.’

He said the vaccines are ‘safe and sounds’ under refrigeration in warehouses.

Biden’s first stop on the Pfizer tour was to the facility’s ‘freezer farm,’ of 350 freezers storing the Pfizer vaccine, which was the first to gain Food and Drug Administration approval.

Engineers at the Michigan plant helped design the ultra-cold vaccine thermal shipper, used to transport the vaccine across the U.S., the White House said.

Since then, the Moderna vaccine has also been approved. Both vaccines are two-dose shots. 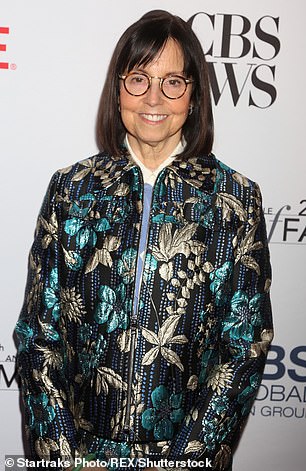 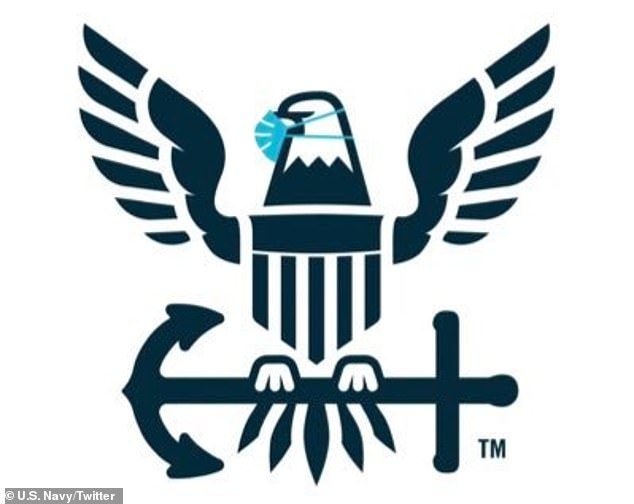 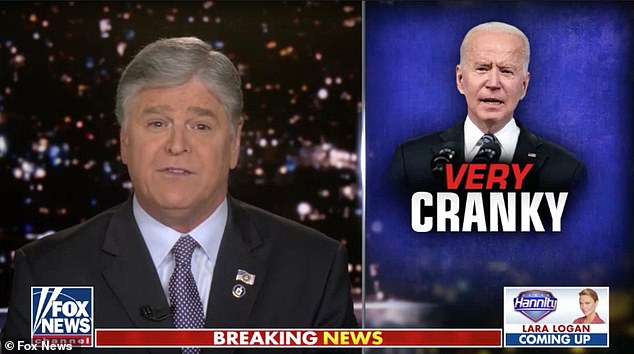 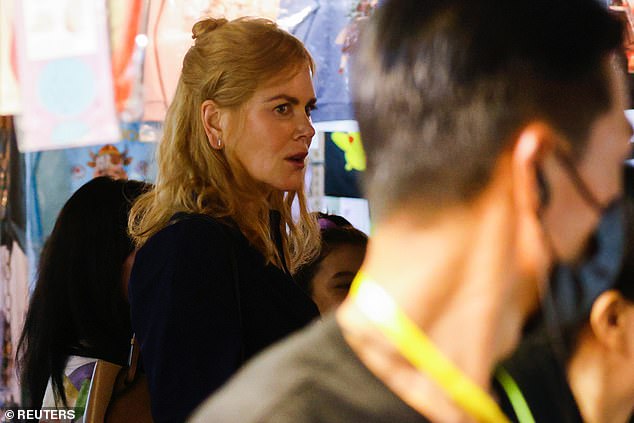 The Business Plan Benchmark
52 mins ago