Pictures of a high school band in Washington state rehearsing in ‘bubble’ tents due to the coronavirus pandemic has sparked debate on social media.

Students at the recently reopened Wenatchee High School were pictured in the band room zipped into bright green tents as an inventive way to keep them social distance while playing.

However photos of the students crammed into the small enclosures with their instruments has sparked debate online with Congresswoman Marjorie Taylor Greene leading critics tweeting that it was ‘child abuse’.

Pictured from left Emma Banker, Jessi McIrvin, and Valerie Sanchez record vocals in pop-up tents during choir class at Wenatchee High School on February 26, 2021 in Wenatchee, Washington. The school has been using pop-up tents as COVID-19 enclosures for its music programs as students return to classrooms 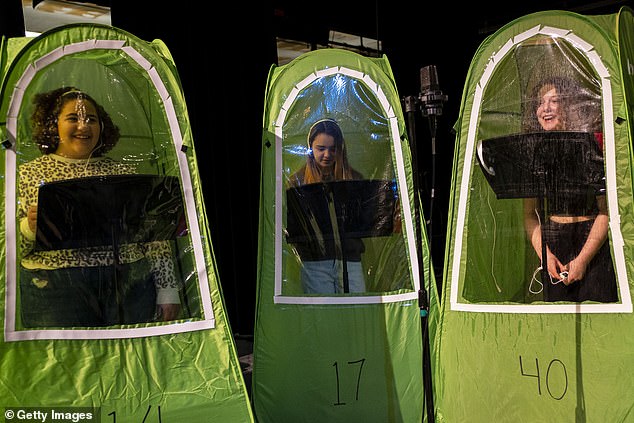 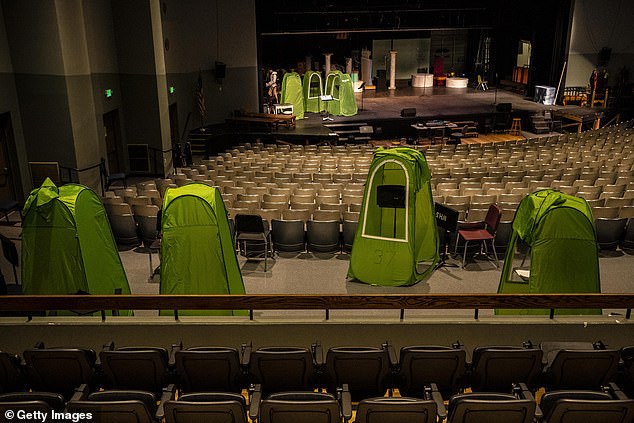 Pop-up tents are seen in an auditorium at Wenatchee High School in Wenatchee, Washington

The school returned to hybrid learning on January 26 and the band has been forced to adapt to new health and safety restrictions with the tents – and by allowing only half of the group to practice at any one time.

Congresswoman Greene tweeted: ‘End this nonsense, America!’ wrote the congresswoman, who has been a vocal critic of coronavirus restrictions.

‘This is not normal,’ slammed one Twitter user James Melville.

‘This high school band practice in Washington is making me lose it,’ joked another named Joshua Potash.

Some went as far as to compare the bright green tent bubbles to the large egg seen in the movie Alien.

Yet despite the controversy over the pictures of the band, school officials have reported that the students are happy to be back and the safety restrictions are working well.

‘It is amazing the level of energy in the building, having adults interacting with kids but also the conversations of adults to adults,’ Wenatchee principal Eric Anderson told Wenatchee World.

‘You get kids back in the building, you get a lot of smiles even with masks on. You can tell people are happy,’ he added, claiming that being back in schools is much better for the children from an emotional standpoint.

Wenatchee senior Alexandra Provo de las Heras said that she was ‘excited to be back in the building with friends and around teachers.’

‘It’s so much easier to being in the classroom than being in Zoom,’ she added. 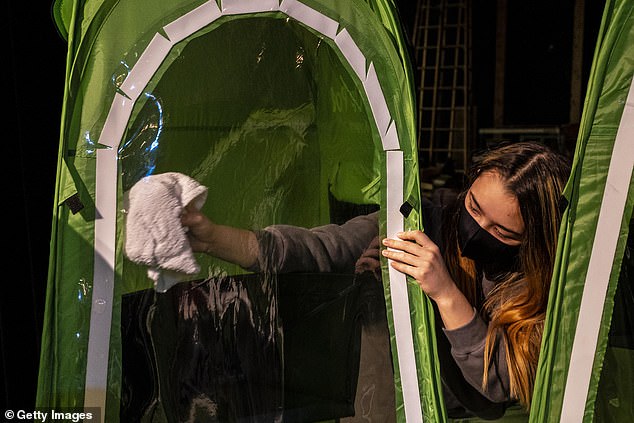 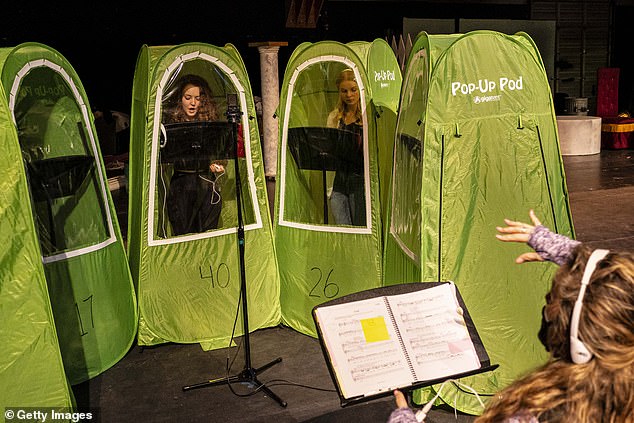 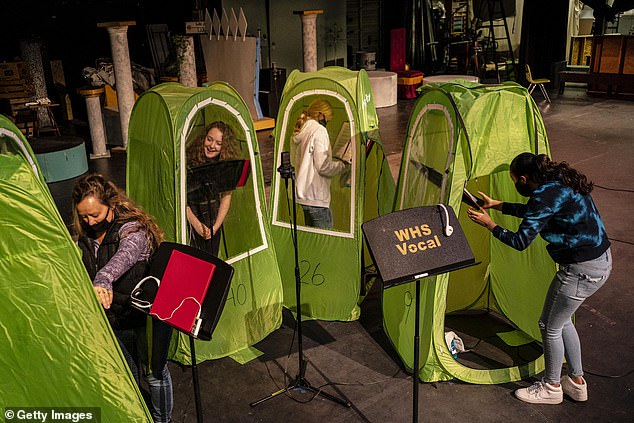 Pictured from left, choir director Dawn McCorkmick and students Emma Banker, Jessi McIrvin, and Valerie Sanchez prepare pop-up tents during choir class at Wenatchee High School on February 26, 2021 in Wenatchee, Washington. The school has been using pop-up tents as COVID-19 enclosures for its music programs as students return to classrooms 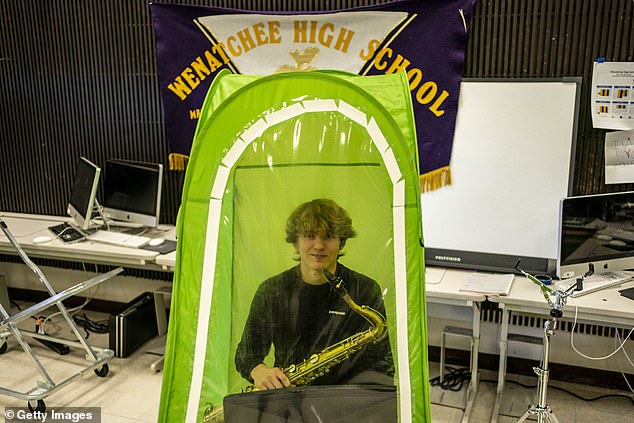 Clay Lancaster poses with a tenor saxophone in his pop-up tent during wind ensemble class at Wenatchee High School in Wenatchee, Washington. The school has been using pop-up tents as COVID-19 enclosures for its music programs as students return to classrooms

The school is currently working on a hybrid am/pm system.

All students are taught remotely on Mondays but throughout the rest of the week, they attend in-person classes either in the morning or in the afternoon.

‘I think that has been critical, in my mind, because you have now four days a week where they are seeing a teacher and interacting with some friends. Granted they only have 5 minutes between class periods, so they don’t have a ton of time to chat,’ Anderson explained.

‘Some kids will get here early so they have time to talk to their friends.’

He said that the classes have been changed to only 35 minutes in length but that teachers are adapting and that the grab-and-go lunch system the school has established is also working well.

‘That and getting into that groove of what are we doing in-person and what are we asking kids to do as an extension of learning when they are not with us,’ Anderson continued.

‘That has been working out well. The grab-and-go lunches could not be working out better. We really have an environment in this building where there is never a reason where a kid has to take their mask off.’

The principal claimed that he would also be hesitant to suggest that the students lost out on learning during the pandemic.

‘Even in remote learning, their questions would be different. I will give our students and staff credit. They have worked extremely hard through this process,’ Anderson said.

Twitter users joked about the bright green tents being used by the band, as pictured 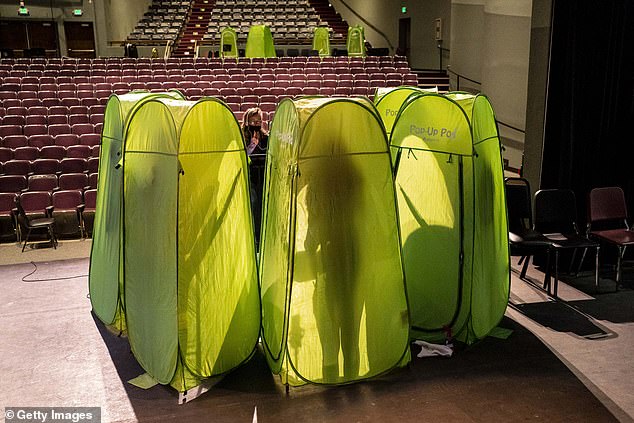 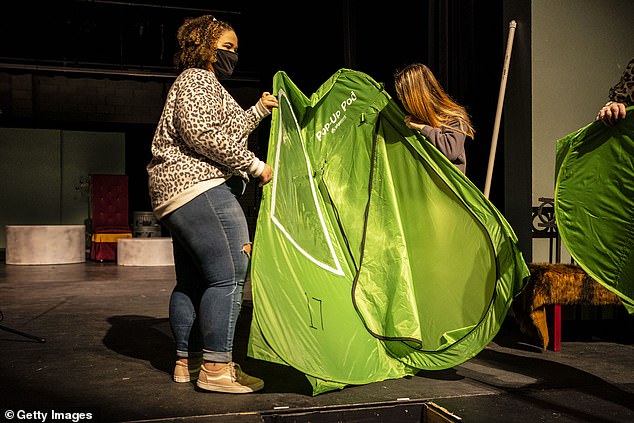 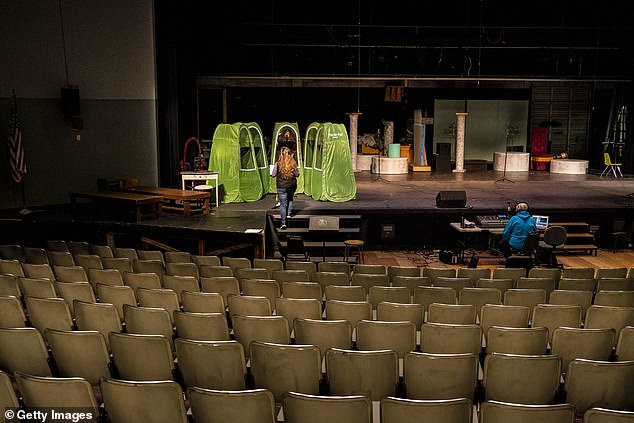 From the start of the year, Washington school districts have been allowed to begin reopening across all grades if their area is averaging fewer than 50 new coronavirus cases per 100,000 residents

While others joked, ‘When the kids revolt and kill us all, we deserved it.’

‘There I was, trapped in a tiny green tent with a sousaphone, and all I could think was not again,’ wrote user Ben Domenech.

‘From here out whenever I try to describe how stress feels to me, I’m going to just share a photo of that sousaphone player,’ added @NMercad as he shared the photos.

From the start of the year, Washington school districts have been allowed to begin reopening across all grades if their area is averaging fewer than 50 new coronavirus cases per 100,000 residents.

According to the Washington Office of the Superintendent of Public Instruction, 28.3 percent of students are now back in schools on any given day across all grades. 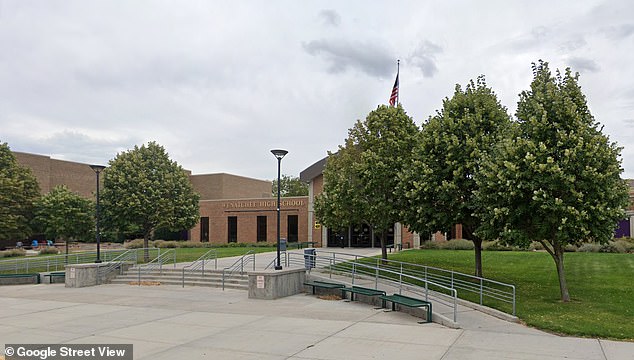 Wenatchee High School returned to hybrid learning on January 26. It is using an am/pm system with students coming to school in the morning or in the afternoon from Tuesday to Friday

Only 17 percent of high school students are back in schools on average on any given day.

At least 33.1 percent of the state’s students are now in schools at least once a week.

A report last week from Washington State Department of Health found that there had been ‘fairly low’ transmission of COVID-19 in Washington schools since August.

It added that vaccination of teachers is important but not a prerequisite for reopening schools.

This is not the first time that ‘bubbles’ have been tested out by musicians.

There was no spike in cases after the event, but health experts have claimed more testing is needed. 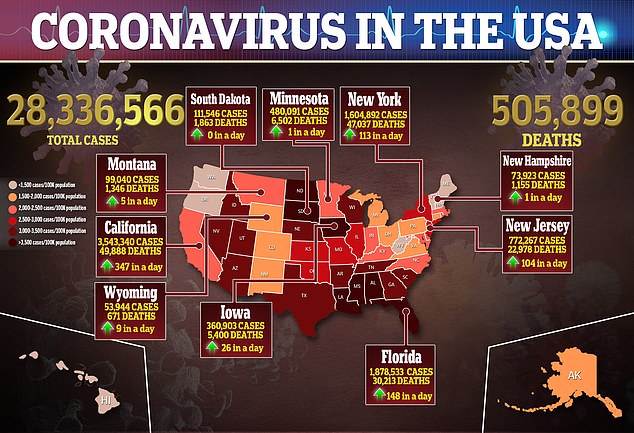 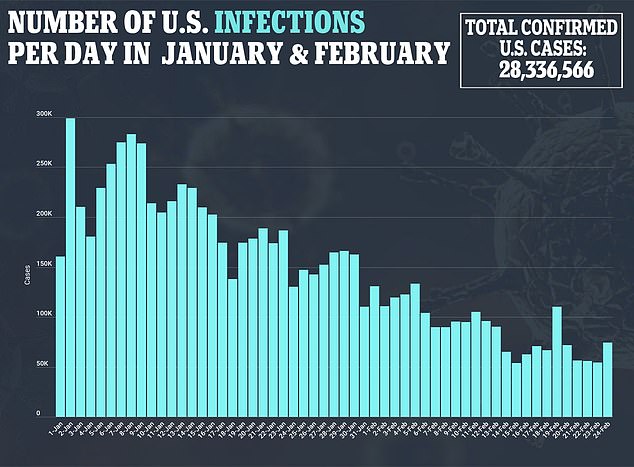 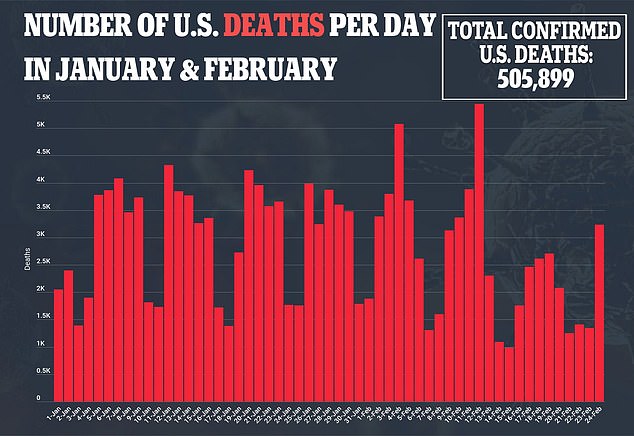 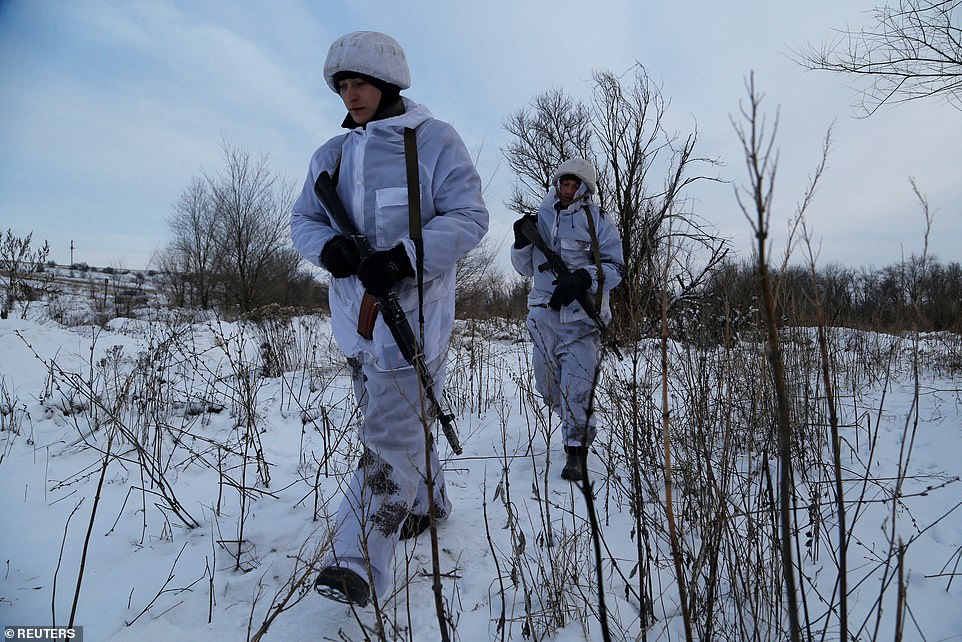 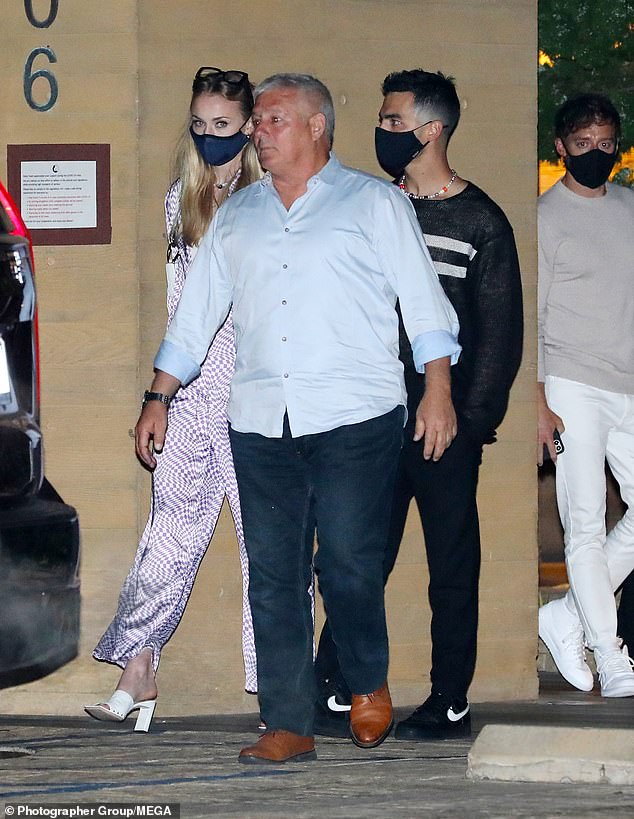 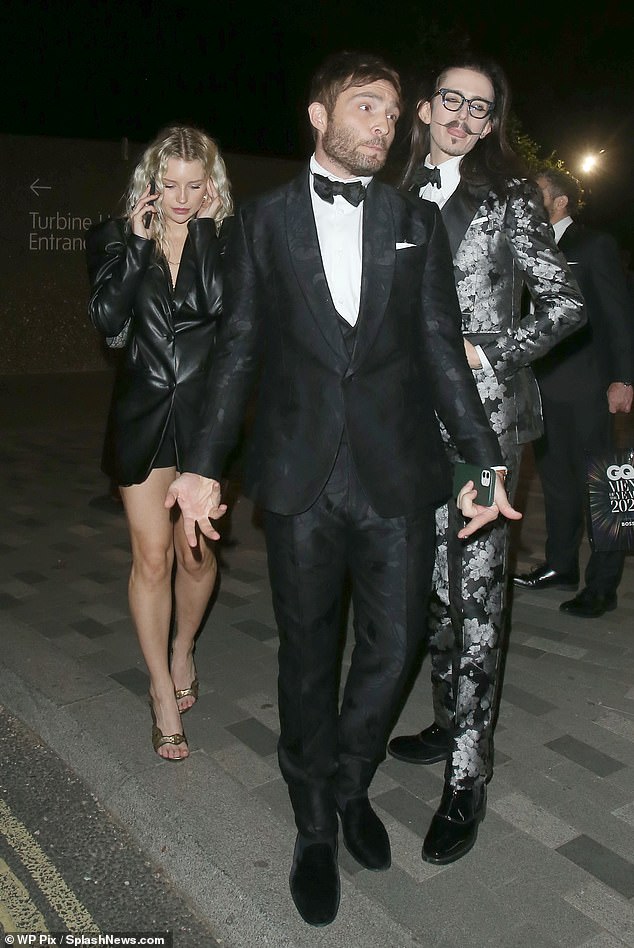 MEGHAN MCCAIN: I got Covid, it made me doubt if America will recover. It WILL but not with Biden
39 mins ago