The head of one of the four companies that control 90 percent of the U.S. market for baby formula has warned that the shortages nationwide could last until the end of the year, as President Joe Biden‘s critics mocked his claim that ‘only a mind reader’ could have predicted the current crisis.

The nationwide ‘out of stock’ level has been consistently above 10 percent since August, and in January this year The Wall Street Journal warned of an impending problem.

Brian Deese, Director of the National Economic Council, said on Friday morning that the White House had been urging states to take action to combat the issue in February – after the shortage was exacerbated by a February 17 recall of some products produced by Abbott Laboratories, and a shutdown of one of their plants.

‘We actually gave states the guidance on using flexibility the day after this recall happened in February,’ he told CNN‘s Kaitlin Collins.

Yet Biden on Friday insisted no one could have predicted the crisis, which has seen desperate parents go from store to store, trying to find the urgently-needed formula.

The president was hosting an event about community policing when he was asked about the baby formula situation. He said he would only answer questions on policing, before somewhat reluctantly addressing the crisis at hand.

Asked if his administration should have acted sooner, Biden replied: ‘If we’d been better mind readers, I guess we could have.’

His answer was seized upon by critics.

The FDA has completed its investigation, but has yet to offer further details on when Abbott’s plant in Sturgis, Michigan, can reopen 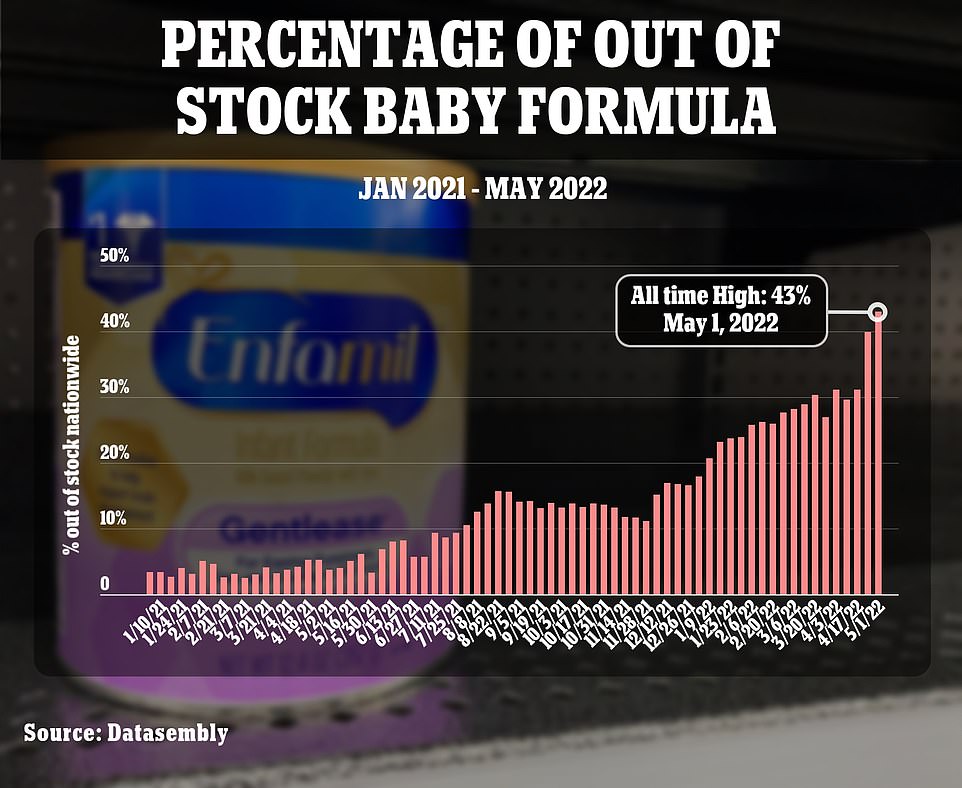 This chart shows how quickly the nationwide crisis has escalated. The scale of the crisis is revealed in the new analysis, which shows that only 43 percent of the usual national supply of baby formula is available

Abbott Laboratories, the biggest baby formula supplier in the U.S., ceased production at its Michigan plant in February 2022 amid reports of fatal bacterial infections.

A timeline of events shows reveals the shut down was the plant had previously been under scrutiny by the U.S. Food and Drug Administration (FDA).

September 2021: The FDA conducted a four-day inspection of the Abbott Laboratories plant in Sturgis, Michigan.

The inspection report revealed the plant ‘did not maintain’ clean and sanitary conditions in at least one building that manufactured, processed, packaged or held baby formula.

The FDA also noted an instance of improper equipment maintenance and temperature control.

October 2021: A whistleblower sends the FDA a 34-page document outlining potential concerns with the Sturgis plant.

The document, which was made public by Congresswoman Rosa DeLauro in April 2022, was written by a former plant employee.

The employee accused the plant of lax cleaning practices, falsifying records, releasing untested infant formula, and hiding information during an FDA audit in 2019, among other issues.

The agency alleged the plant failed to ensure that all surfaces that contact infant formula were maintained to prevent cross-contamination.

The report states the facility ‘did not establish a system of process controls’ to ensure the baby formula ‘does not become adulterated due to the presence of microorganisms in the formula or the processing environment.’

Officials also alleged the plant failed to disclose in an investigation report whether a health hazard existed at the facility.

Additionally, the report stated plant workers were did not wear the ‘necessary protective material’ when working directly with infant formula.

The FDA also said it is investigating four reports of infants who were hospitalized after consuming the formula, including one who died.

February 28: Abbott Laboratories expanded its recall of Similac baby formulas after a second infant who was exposed to the powdered baby formula died.

April 15: Abbott releases a statement alleging it is working closely with the FDA to restart operations at the Sturgis plant.

May 10: Abbott releases a statement to DailyMail.com claiming ‘thorough investigation’ by the FDA and Abbott revealed ‘infant formula produced at our Sturgis facility is not the likely source of infection in the reported cases and that there was not an outbreak caused by products from the facility’.

Abbott claims they are ‘working closely with the FDA to restart operations’ at the plant, with the spokesperson noting: ‘We continue to make progress on corrective actions and will be implementing additional actions as we work toward addressing items related to the recent recall’.

The FDA told DailyMail.com it was holding discussions with ‘Abbott and other manufacturers to increase production of different specialty and metabolic products’ but refused to say when the Sturgis plant could reopen.

Sen. Mitt Romney issued a letter to the FDA and U.S. Department of Agriculture (USDA) urging leaders to address the formula shortage and work to prevent future threats to infant health.

May 11: Lawmakers on Capitol Hill announce plans to hold a hearing in two weeks on infant formula shortages.

Abbott announced it would take up to ten weeks for the company to get baby formula to retailers once the Sturgis plant reopens.

Abbott also said: ‘After a thorough review of all available data, there is no evidence to link our formulas to these infant illnesses.’

‘America doesn’t need a mind-reader as president. It needs a Wall Street Journal reader,’ said one.

‘Per Jim Geraghty, the Journal had a story about the formula shortage back on … January 12.’

Another noted: ‘people have been talking about a looming shortage for months.’

Another added: ‘@POTUS I’m not a mind reader, I listen to people talking about Baby Formula & look at store shelves, I could see the problem weeks ago.

Others pointed out that the Abbott factory shutdown should have set alarm bells ringing.

‘#Biden joked & said he wished he was a mind-reader, in light of the #BabyFormulaShortage,’ one man tweeted.

‘But, the White House admitted that, ‘We were aware…back in February…we have had a team on this from the FDA & interagency process since then.’

‘Then, sent PALLETS of baby formula to BORDER.’

Another sarcastically referenced Biden’s new ‘Disinformation Governing Board’ – an advisory council on online disinformation dubbed by critics the Ministry of Truth.

‘Biden just said he would have moved quicker on the baby formula if he was a mind reader. HE KNEW ABOUT THIS IN FEBRUARY!!’

The anger at Biden’s off-hand dismissal of the question came as the CEO of Perrigo – one of the big four baby formula manufacturers – warned of lasting shortages.

The issue has been compounded by the pandemic, and supply chain issues going back since the start of the outbreak.

It has been exacerbated by the fact that 98 percent of baby formula is domestically-produced, and the U.S. regulations will not allow many external producers to import their products, despite frequently higher standards, because the labelling does not meet FDA regulation.

Furthermore, the four companies – Abbott, Reckitt Benckiser, Nestlé and Perrigo – control nearly 90 percent of the U.S. market for baby formula, meaning that an issue in one has a huge impact.

Swiss-based Nestle is the world’s largest producer of baby formula.

Perrigo, an Irish-American firm with its headquarters in Dublin and U.S center in Allegan, Michigan, makes roughly 8 percent of the market, selling store-brand baby formulas for retailers, including Walmart and Amazon.

On Friday the CEO, Murray Kessler, told Reuters he expects shortages and heightened demand to last for the ‘balance of the year.’

Kessler said their factories in Ohio and Vermont are running at 115 percent capacity, to compensate for Chicago-based Abbott’s shutdown.

‘We have stepped up and are killing ourselves to do everything we can,’ Kessler said.

At the request of the FDA, Perrigo is focusing on four items: the store-brand versions of Similac Pro Sensitive and Pro Advance, and Enfamil Gentle Ease and Infant, Kessler said.

The company added that it is making other formulas as well.

It also has a smaller business making some national formula brands, including Bobbie.

Perrigo is working with retailers including Walmart and Target Corp so they ‘get something each week,’ Kessler said.

Retailers’ allocations are based on an average of what the retailers received prior to ‘this crisis,’ he said.

Some retailers including CVS Health Corp and Target are rationing baby formula.

The White House on Thursday announced steps it is taking to alleviate the shortage, including permitting more imports from countries such as Mexico, Chile, Canada, the Netherlands and France.

Biden said on Friday he expects more formula on shelves in weeks.

French food and beverage company Danone, which also makes infant formulas, said the ‘unexpected Abbott Nutrition recall in February has led to a surge in demand in the U.S. market.

‘We are in discussions with the U.S. authorities to see how we can support them in addressing their shortages.’

Abbott closed its manufacturing facility in Michigan after complaints of bacterial contamination. 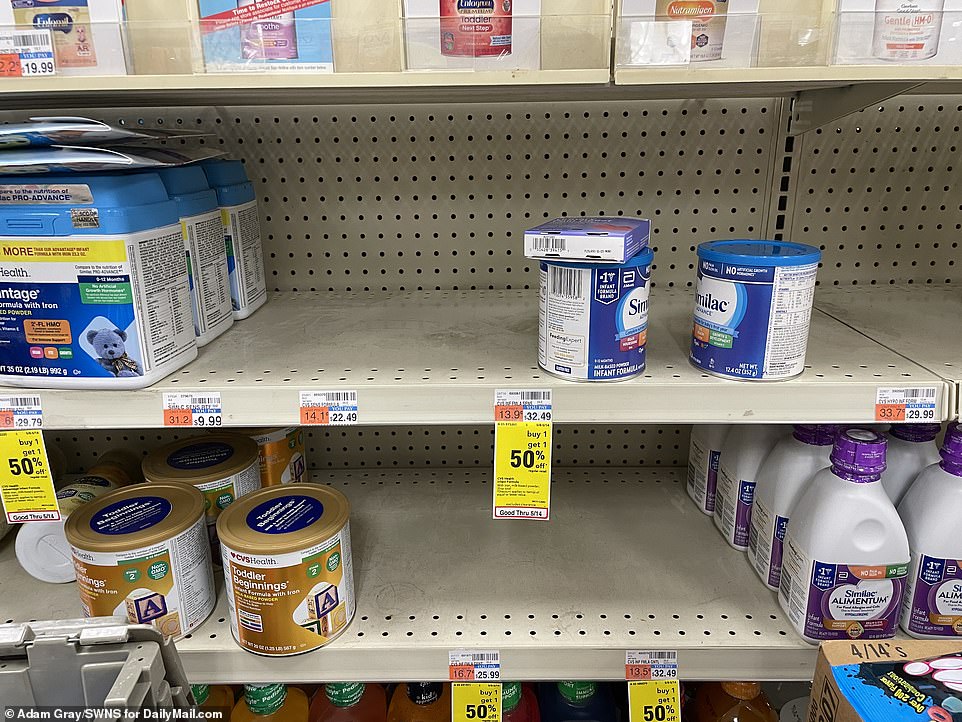 Empty shelves are pictured in a Brooklyn store on Friday, as the nationwide shortage continues 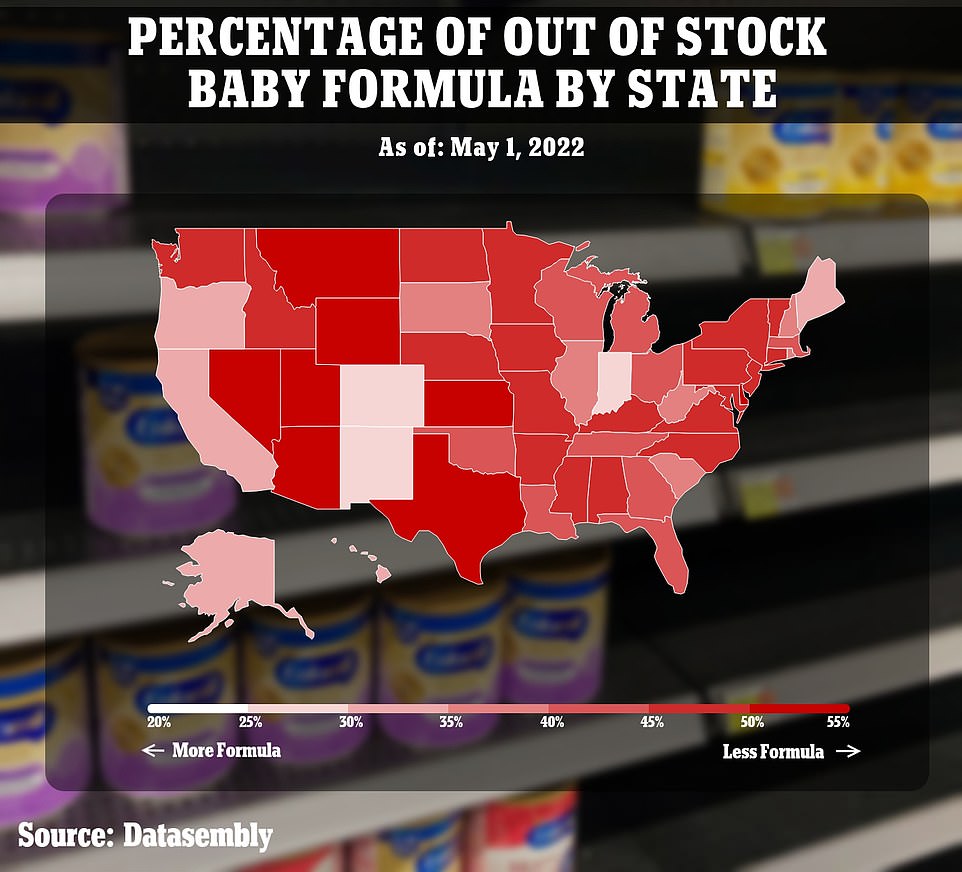 Parents in Tennessee are the hardest-hit by the baby formula shortage, new data obtained by DailyMail.com shows

Abbott has said its plants are ‘not likely the source of infection’ and is able to reopen the facility in the next two weeks.

It will then take six to eight weeks for the products to hit the shelves, meaning a delay of at least 10 weeks even if reopened tomorrow.

‘Subject to FDA approval, we could restart the site within two weeks,’ the company said.

‘We deeply regret the situation and since the recall, we’ve been working to increase supply at our other FDA-registered facilities, including bringing in Similac from our site in Cootehill, Ireland, by air and producing more liquid Similac and Alimentum.

‘We also began releasing metabolic formulas that were on hold earlier this month at FDA’s request to those who need these unique formulas.’

The FDA has not set a date for reopening, and told DailyMail.com they were still monitoring the plant.

Jen Psaki, the White House press secretary, said there was no timeline.

‘So our message to parents is we want to do everything we can, and we’re going to cut every element of red tape to help address this,’ she said.

Coup to oust Putin is 'already under way': Ukraine's spy chief believes tyrant will be deposed 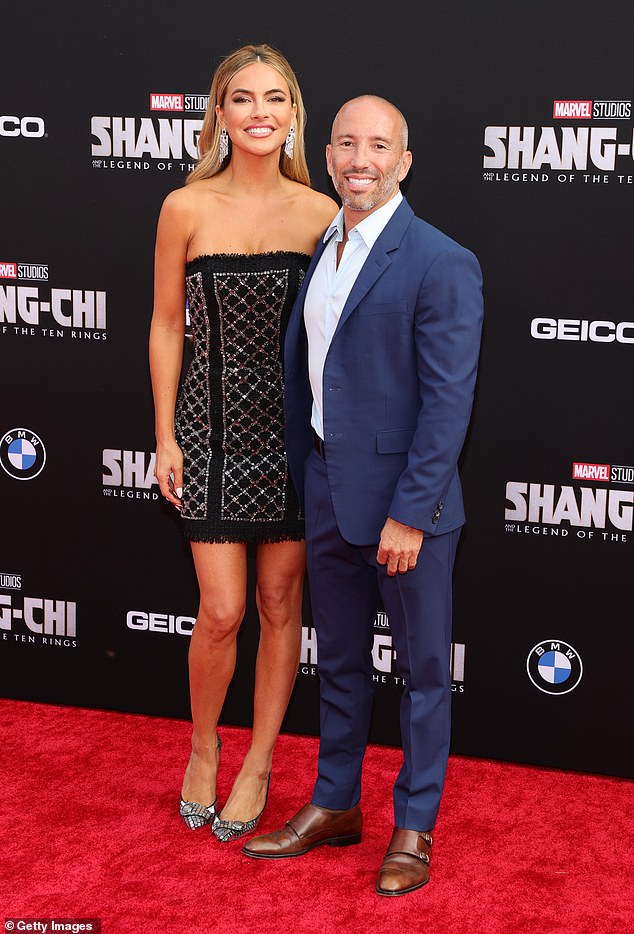 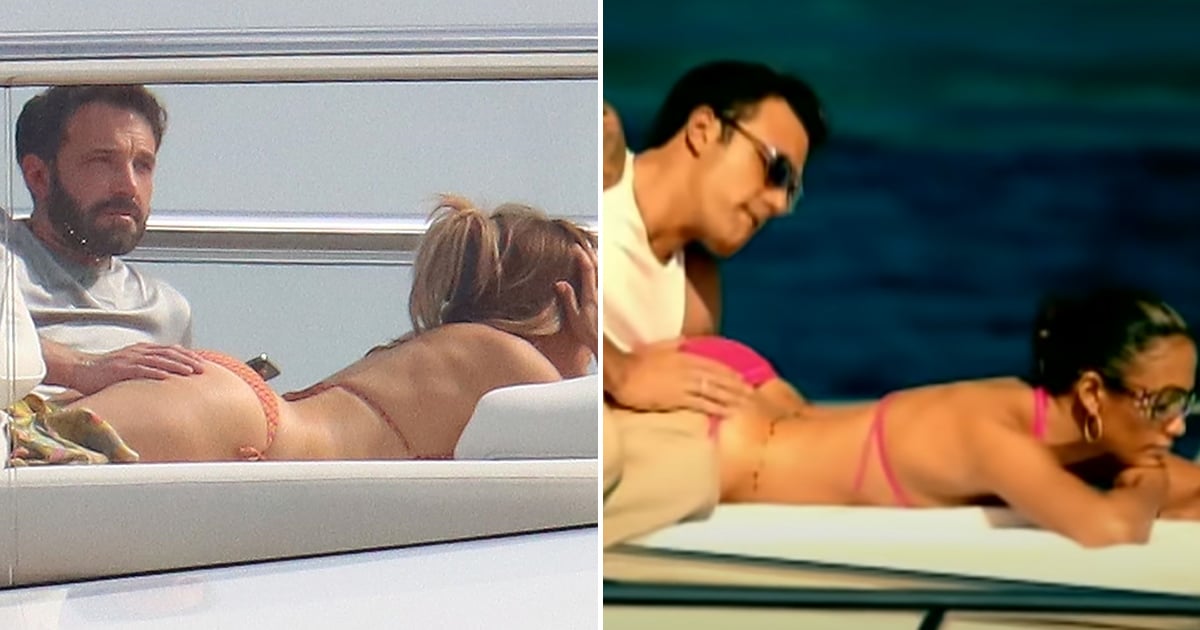 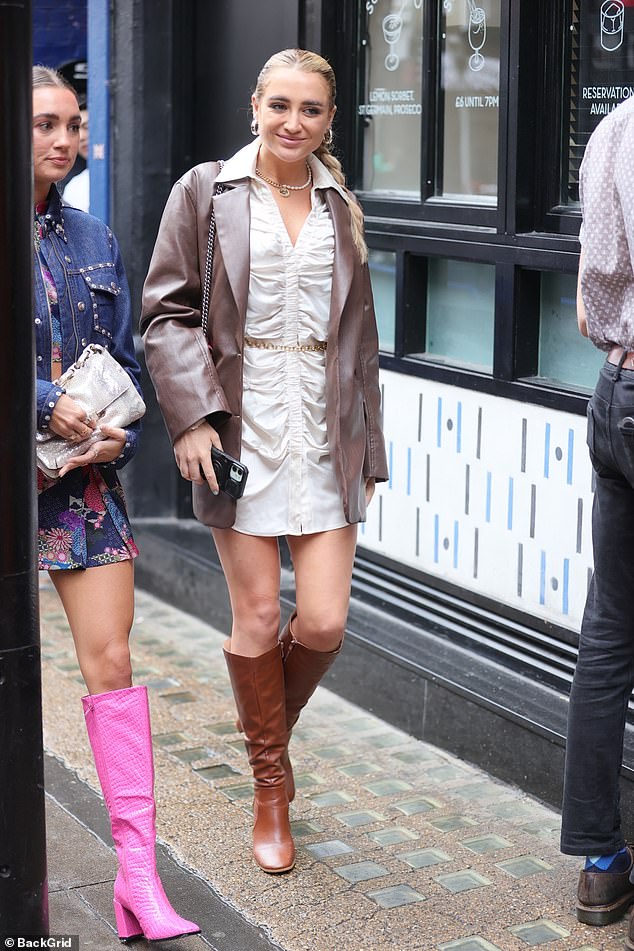