An appeals court cut in half the $60 million jury award to a New York City high school student who suffered horrible burns in a now-banned chemistry experiment incident seven years ago.

Alonzo Yanes, now 23, sustained third-degree burns to 30 percent of his body in 2014 when he was engulfed in a fireball during a ‘Rainbow Experiment’ conducted by Beacon High School teacher Anna Poole.

The Appellate Division, First Department said that while Yanes suffered terrible and must live with disfiguring scars for the rest of his life, they found the jury’s 2019 award ‘excessive,’ the New York Post reported.

The court ordered an award of 12 million for Yane’s past pain and suffering and another $17 million for his future struggles, a historic sum in New York State.

‘We were hoping for more but we are pleased that this was the largest amount ever allowed by the Appellate Division for pain and suffering in New York,’ Yanes’ lawyer Ben Rubinowitz told the Post.

Alonzo Yanes, now 23, sustained third-degree burns to 30 percent of his body during a botched chemistry experiment conducted by his teacher in 2014 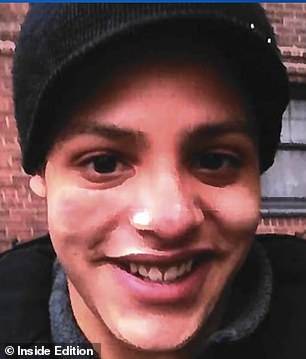 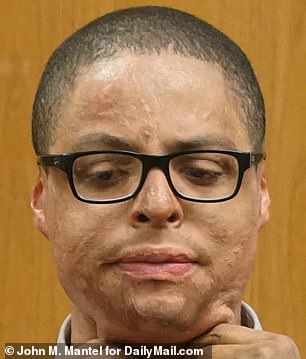 While a 2019 jury awarded Yanes with $60 million, an appeals court reduced the payment to $29 million for his past pain and future struggles. It is the largest payout in New York State 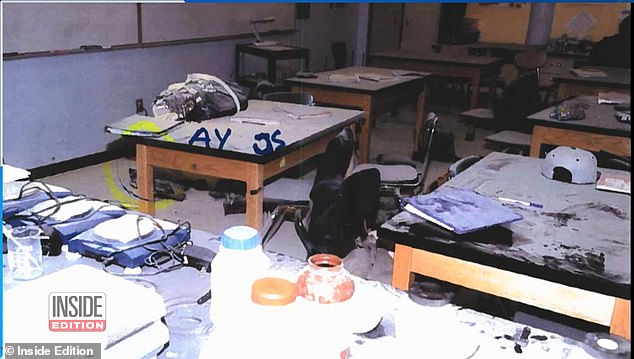 Pictured, Yanes chemistry class room where his teacher, Anna Poole, was conducting a chemistry showcase that exploded in Yanes’s face 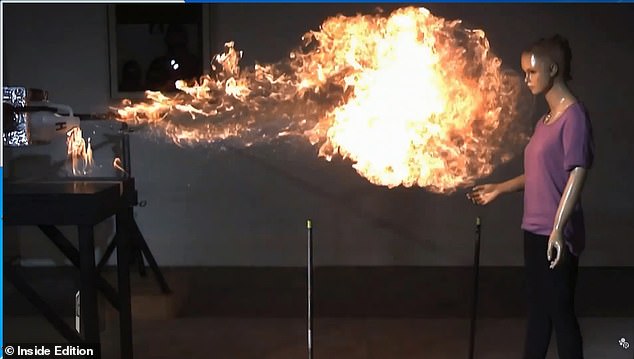 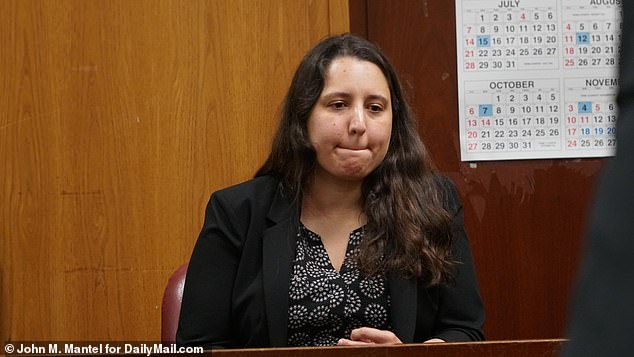 Anna Poole no longer works in a classroom but now at an office for the state Department of Education. She testified about the incident in 2019

The city’s Law Department had filed an appeal after the 2019 ruling to lower the pay out in order to match that of previous incidents, like that of Mark Perez, who’s $101 million award for an injury in 2013 was reduced to $20 million in April.

‘We argued for an award consistent with damages in similar cases, and the court reduced it by half,’ the Law Department said in a statement.

At the center of the incident that scarred Yanes was the now-banned ‘Rainbow Experiment,’ a chemistry demonstration that shows how different salts create different colored flames.

Poole had conducted the experiment in January 2014, in a classroom that lacked basic safety measures like a fire blanket, shower and eyewash station.

Poole had poured a highly flammable substance from a container into a bowl of nitrate, which exploded in the classroom and engulfed Yanes in flames.

‘I remember feeling this immense heat completely come forward and wrap around my entire body,’ Yanes – who was sitting just three feet from the experiment – told Inside Edition in 2019.

‘I remember these flashes of blue and orange just flying toward my face. I remember feeling this burning sensation around my head.’ 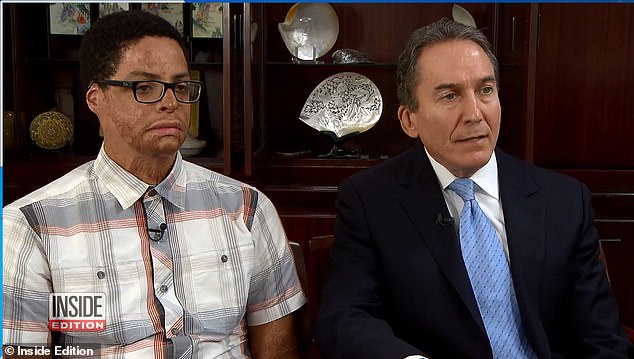 Yanes told Inside Edition about the pain he felt when he looked in the mirror for the first time after he sustained the disfiguring burns. He was joined by lawyer Ben Rubinowitz 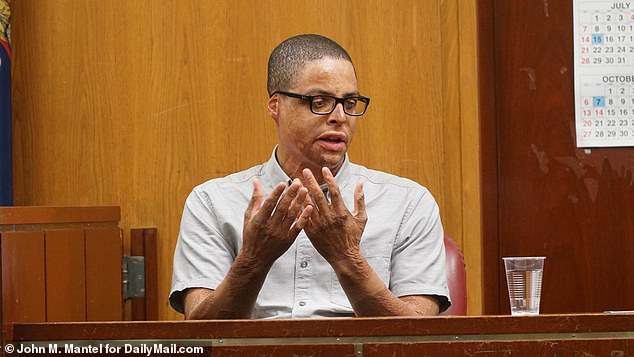 ‘I will never get used to that. It still hurts tremendously,’ Yanes told the court in 2019 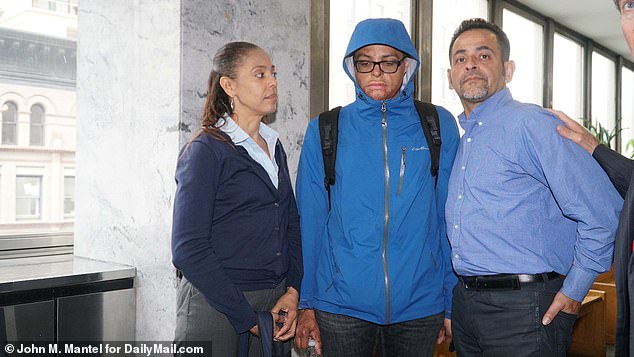 Yanes, pictured with parents Yvonee, left, and Claudio outside the courtroom in 2019

Yanes spent five months in hospital after the accident, and told the program of the pain he felt when he looked in the mirror for the first time after sustaining the burns.

‘As funny as it sounds, I kinda looked like something out of a horror movie,’ he stated.

Poole was pulled from the school following the incident and lawsuit and has since been working at a central New York Department of Education office, the city’s Law Department said in a statement.

In court back in June 2019, Yanes took the stand and stated: ‘The way that I look, it gets in the way too much. I don’t think the scars are very attractive,’ the 21-year-old told the courtroom.

He also revealed that he has never got used to people ‘gawking’ at him in the five years since the accident.

‘I will never get used to that. It still hurts tremendously,’ he stated.

The former student further stated that he often takes off his glasses so that he can not see people staring at him. 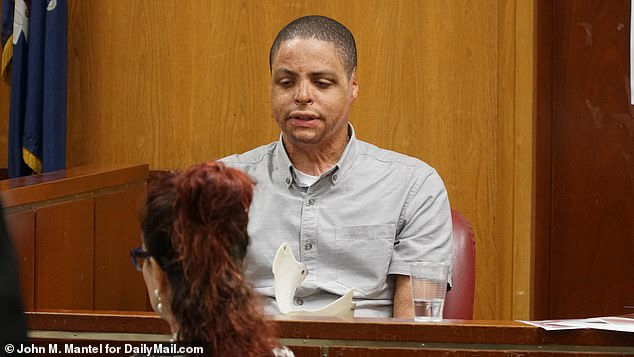 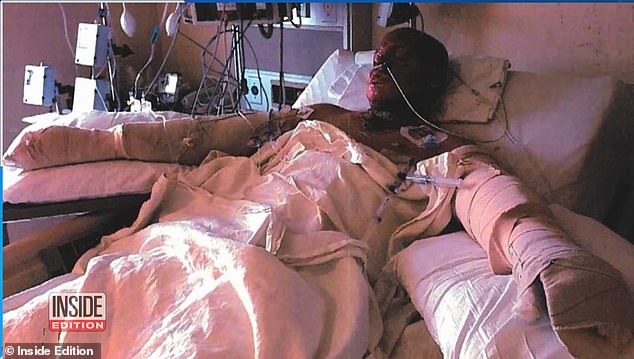 Yanes spent five months in hospital after the accident (pictured) 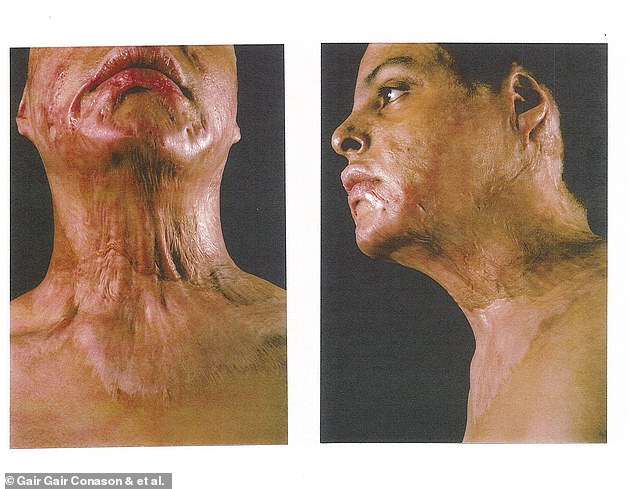 ‘The world wasn’t very accepting of the way that I physically looked,’ he said.

Yanes then painfully told the court: ‘Not a single day passes by when I don’t think about my injuries or what my life would have been if I wasn’t involved in that injury.’

Images of the horrific injuries sustained by Yanes were shown to the court in the trial.

His mom, Yvonne, also told jurors how she was forced to warn her daughter that her brother’s appearance had changed after he suffered third degree burns when he was hit by the flames.

A tearful Yvonne, now 53, said she told Yanes’ younger sister Alana, who was seven at the time of the incident, that her brother ‘did not look the same anymore’.

Samuella Sigmann, a professor at Appalachian State University, said that the ‘Rainbow Experiment’ should never have been conducted. 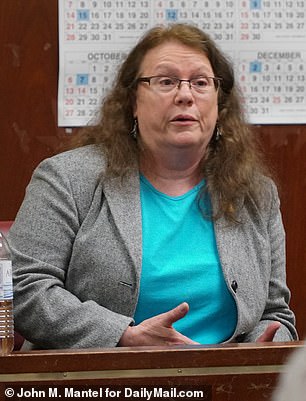 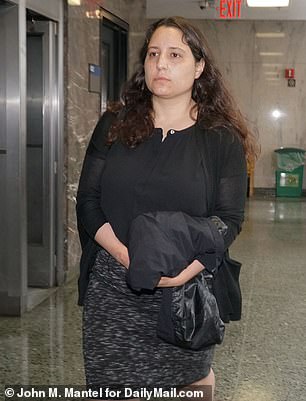 The ‘Rainbow Experiment’ that Anna Poole was conducting when Alonzo Yanes was set on fire, leaving him with third degree burns across 30 percent of his body ‘should never have been done’ said Samuella Sigmann, a professor at Appalachian State University

She said the lack of a fume hood – a ventilated enclosure in a chemistry laboratory, in which harmful volatile chemicals can be used or kept – amounted to ‘willful negligence.’

‘Because they did not have the proper equipment to do it. There was a clear and present hazard and they ignored it. The risk was very high,’ Sigmann added, the Post reported.

Listing a catalogue of failures, Sigmann said that the classroom lacked a fire blanket, shower or eyewash, while Poole herself admitted in the deposition that she had never used a fire extinguisher before.

The court heard that although Poole was wearing goggles, her students were not.

And the teenagers – who should have been at least 8 feet away away from the demonstration table, were also sitting too close, with Yanes, just two to three feet away, the expert added.

Sealed With a Kiss! How Cute Are Ozuna and His Wife Taina Marie Melendez At the Latin Grammys? 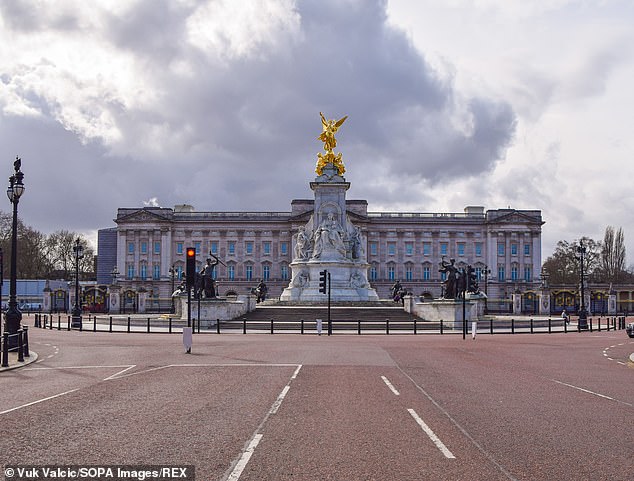 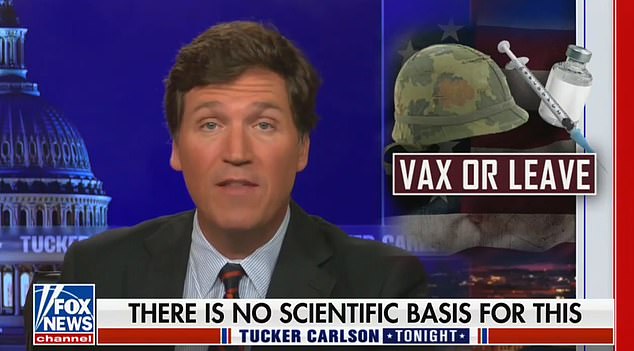 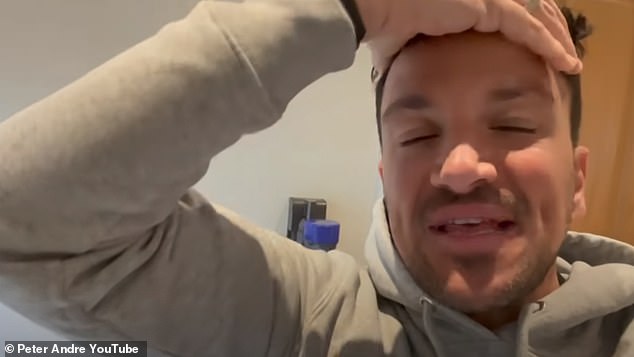 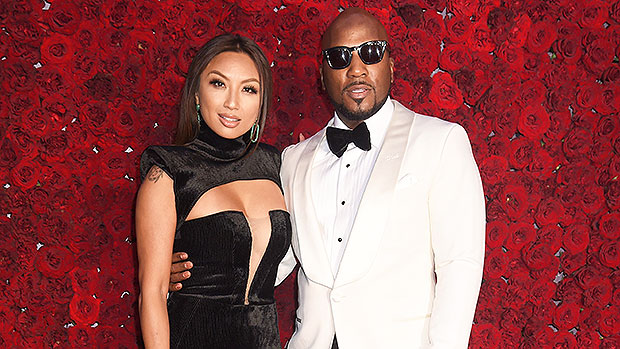 Female DoorDash driver, 51, is shot dead by robbers in Baltimore
27 mins ago

Bitcoin Price Prediction: BTC/USD May be Limited below $39,500 Level
35 mins ago