Rep. Alexandria Ocasio-Cortez says she is willing to ‘tank’ the $1.2 trillion infrastructure bill that is a key priority for President Biden if party moderates manage to delink it from a larger $3.5 trillion budget plan that contains her core liberal priorities.

Her blunt statement, issued during a streamed interview from a car where she also weighed in on California politics and other matters, is just the latest sign of the strains between party wings as two centerpiece proposals carrying Biden’s agenda advance.

‘Nothing would give me more pleasure than to tank a billionaire, dark money, fossil fuel, Exxon lobbyist-drafted ‘energy’ infrastructure bill if they come after our child care and climate priorities,’ she said, ridiculing a traditional infrastructure bill that Biden considers a critical part of his agenda.

‘Nothing would give me more pleasure than to tank a billionaire, dark money, fossil fuel, Exxon lobbyist-drafted ‘energy’ infrastructure bill if they come after our child care and climate priorities,’ said Rep. Alexandria Ocasio-Cortez (D-N.Y.)

In fact, Biden repeatedly touted the infrastructure bill on a visit to Queens this week, when he toured storm damage alongside the New York lawmaker and vowed to ‘build back better’ to protect against future storms.

Ocasio-Cortez was laying down a marker after a bitter intra-party fight over advancing a budget resolution that allowed for both pieces of legislation to go forward. Under the deal, House Speaker Nancy Pelosi said she is committed to passing the bipartisan infrastructure deal – which includes traditional projects like roads and bridges – by Sept. 27th.

A group of Democratic centrists forced the commitment from Pelosi after squawking over the budget blueprint, which passed the House last month on a 220–212, allowing for the larger ‘reconciliation’ bill to advance.

But progressives including AOC are demanding assurances that the larger $3.5 trillion package does not crumble amid some moderate opposition, including in the 50-50 Senate.  ‘You know the whole thing was a fiasco, to be honest,’ fellow ‘squad’ member Rep. Ilhan Omar (D-Minn.) said after the deal with centrists.

AOC was responding to a question about whether House progressives are willing to vote against the bipartisan bill.

Many of the left’s priorities – like federal paid leave, Medicare expansion including dental benefits, and environmental programs meant to slow carbon emissions, are included in the second ‘human infrastructure’ bill – although the size of that bill could soon take a hit at the negotiating table. 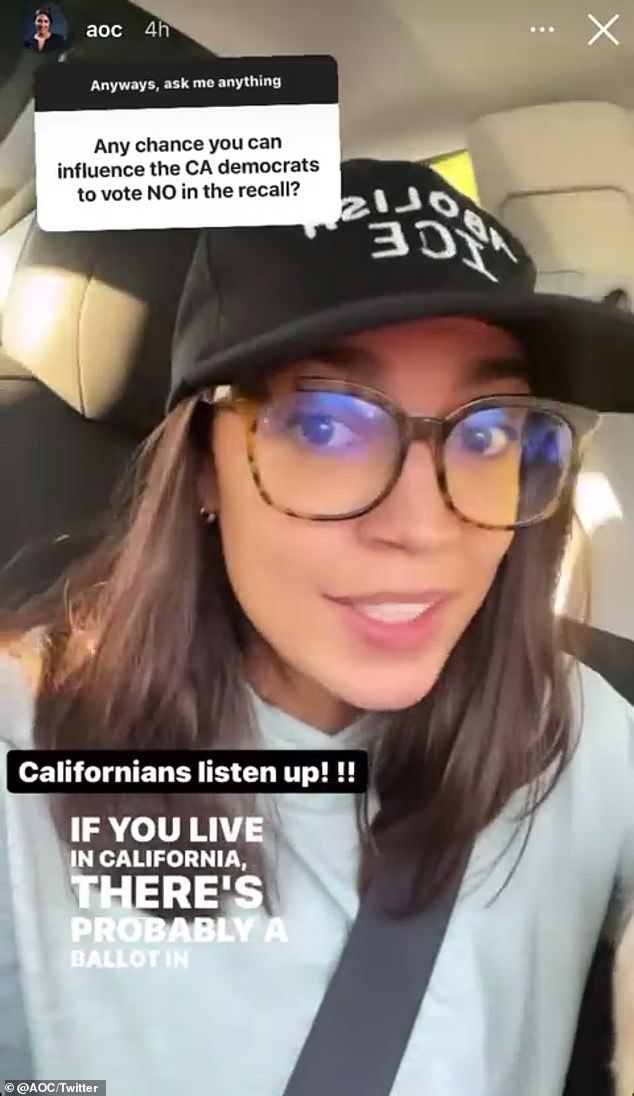 She also commented on the California recall of Gov. Gavin Newsom, urging people to vote immediately 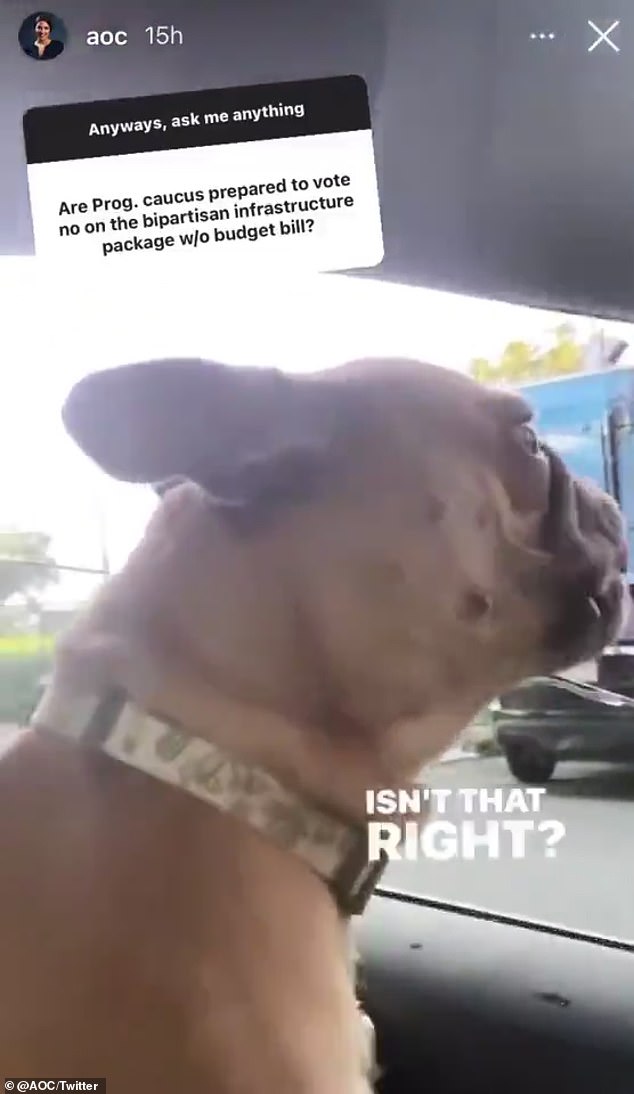 AOC made the comments from a car, accompanied by her French Bulldog 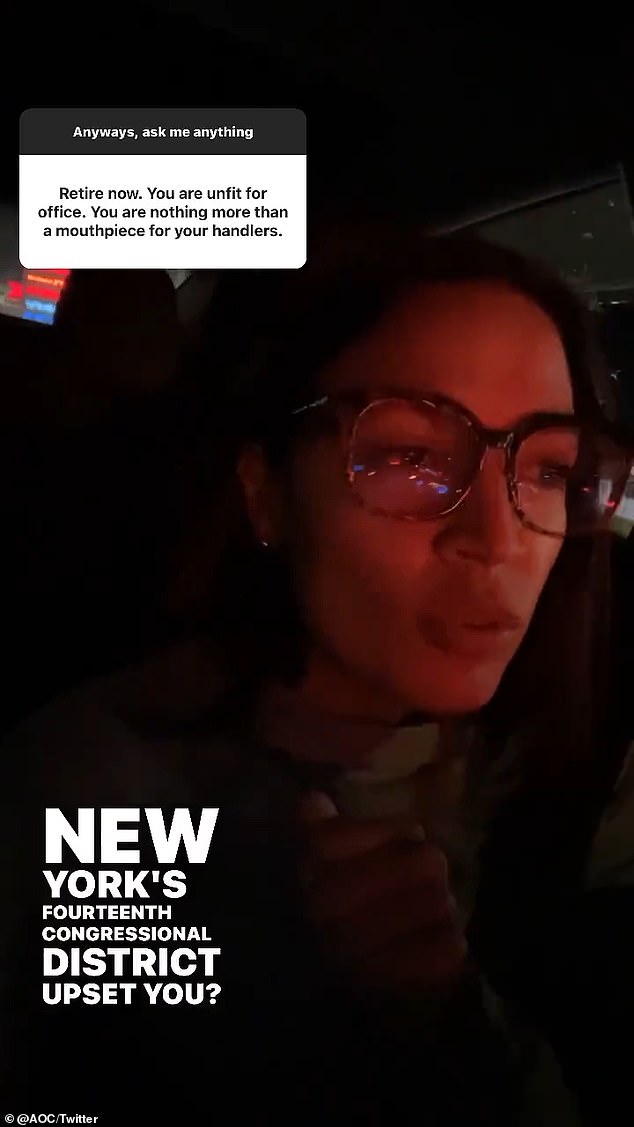 She fielded questions on numerous topics. ‘Does my existence make you mad?’ she asked 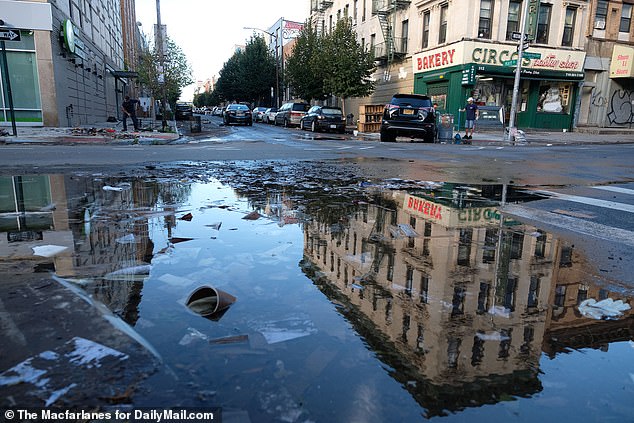 Amid a pronounced divide between liberal House Democrats and Manchin over the ‘reconciliation’ bill, House Majority Whip James C. Clyburn is calling $3.5 trillion a ‘ceiling’ with room for negotiation.

Clyburn, the number three party leader who was a key ally for Biden during the Democratic primaries, called the figure contained in the House and Senate-passed budget resolutions a ‘ceiling’ – a term that comports with how the budget process works.

The budget will only allow spending up to that amount to move in a special vehicle that gets protection from a Senate filibuster. 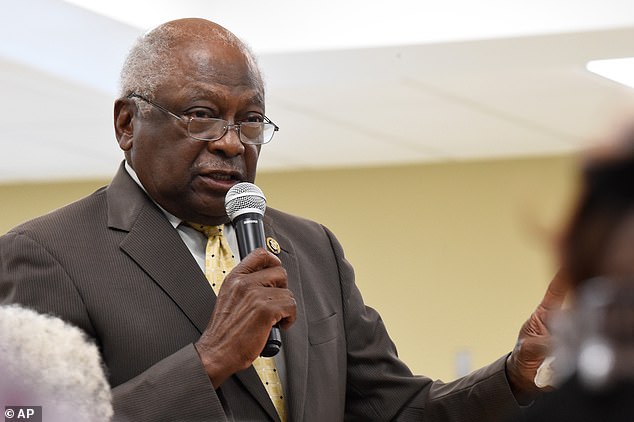 House Majority Whip Jim Clyburn (D-S.C.) called the $3.5 trillion the budget provides for a reconciliation bill a ‘ceiling’ and noted that $2 trillion lies between the ceiling and the $1 trilliong to $1.5 trillion Sen. Joe Manchin (D-W.Va.) has called for

Manchin penned an op-ed where he called for a ‘strategic pause’ on the key legislation, which includes key Biden priorities including paid leave, extending an expanded child tax credit, expansion of Medicare benefits, and other sweeping measures.

His office indicated that he would accept a total price tag of between $1 trillion and $1.5 trillion.

Progressive House Democrats had pushed for more spending in a package leaders are calling ‘transformative’ for the US economy. Senate Budget Committee Chairman Bernie Sanders (I-Vt.) had earlier pushed for a $6 trillion package.

Said Clyburn: ‘Those $2 trillion are there. And I think that there is a lot of room for people to sit down and negotiate. It may be. And you’re sitting around the table, you may not need 3.5 trillion to do what the president wants done and what the country needs done.’ 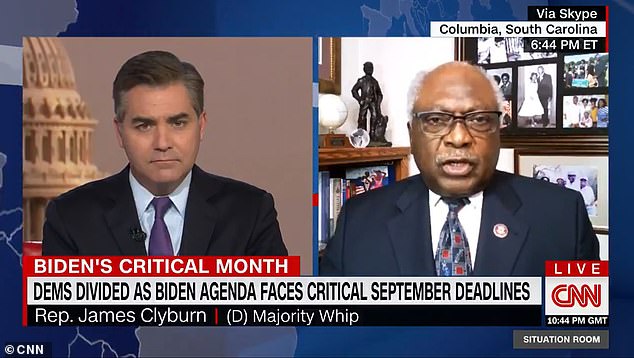 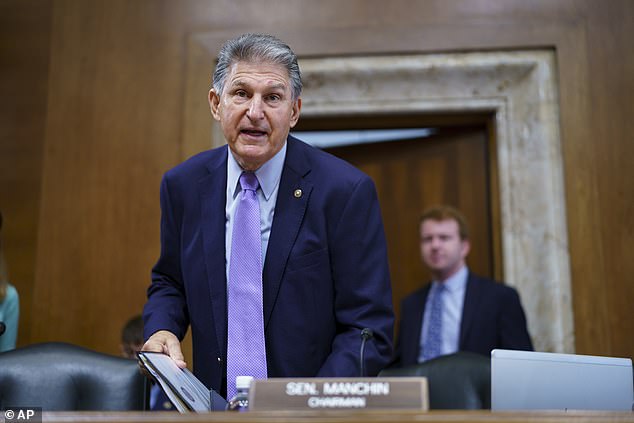 Powerhouse Sen. Joe Manchin (D-W.Va.) voted for the budget resolution, but called for a ‘strategic pause’ over the $3.5 trillion package barreling through Congress 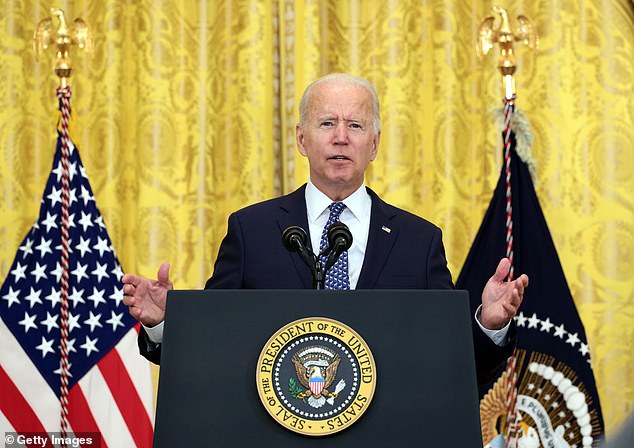 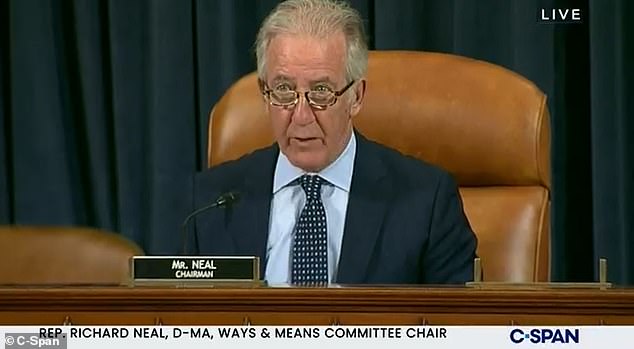 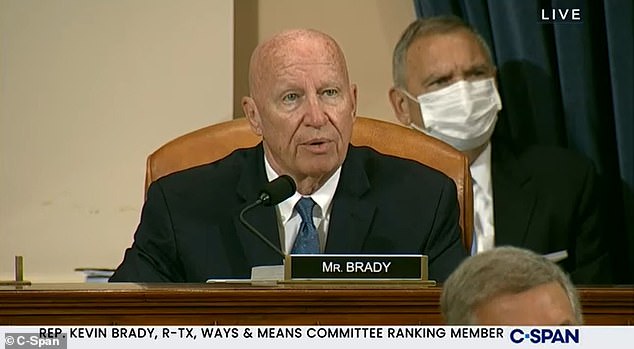 Top Republican on the committee Rep. Kevin Brady (R-Texas) used his opening remarks Thursday to complain that the ‘The mightiest nation on earth just surrendered to terrorists’ in Afghanistan

The after making his comments to CNN on the numbers, he said: ‘But let’s work on it and stay out of all of this negotiating in the media. That’s not the way to negotiate. Let’s keep this around the table and see what we can come up with.’

Clyburn’s comments came as the House Ways & Means Committee began marking up its version of the proposal, as part of the legislative process of designing of what ultimately heads to House floor.

Panel chairman Rep. Richard Neal (D-Mass.) began with the paid leave provisions. ‘This is one of the most profoundly important pieces of this entire package,’ he said. The bill provides for three months of parental leave, caregiving leave, or leave for a ‘serious medical condition.’

‘We will make historic investments in clean energy,’ he said, while promising, while extending the ‘tremendously impactful’ extension of the expanded child tax credit, a major feature of the previous $1.9 trillion coronavirus relief package.

Top Republican on the committee Rep. Kevin Brady (R-Texas) used his opening remarks Thursday to complain that the ‘The mightiest nation on earth just surrendered to terrorists’ in Afghanistan.

Rep. Earl Blumenauer (D-Ore.) countered that it was former President Donald Trump who negotiated with the Taliban and consented to the release of 5,000 Taliban prisoners.

Brady accused Democrats of ‘ramming through trillions of wasteful spending and crippling tax hikes,’ and said the bill would ‘put the IRS in charge of your sick leave.’ 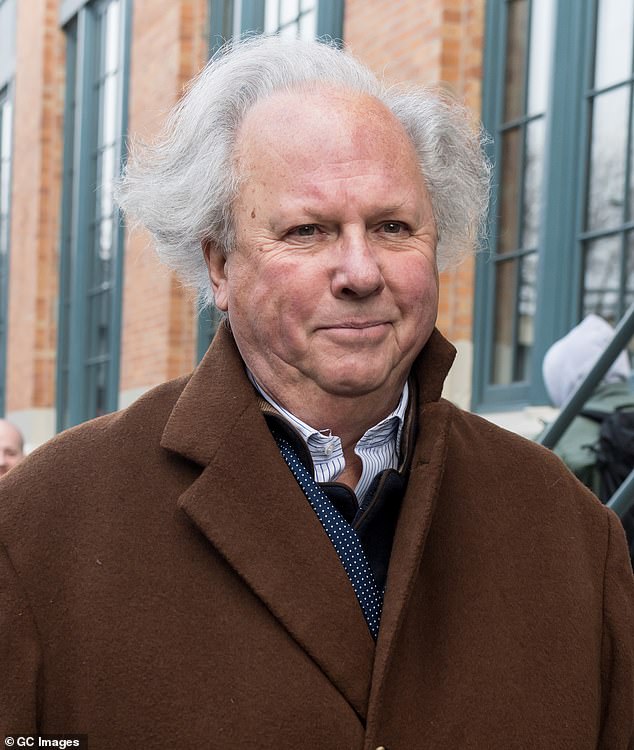 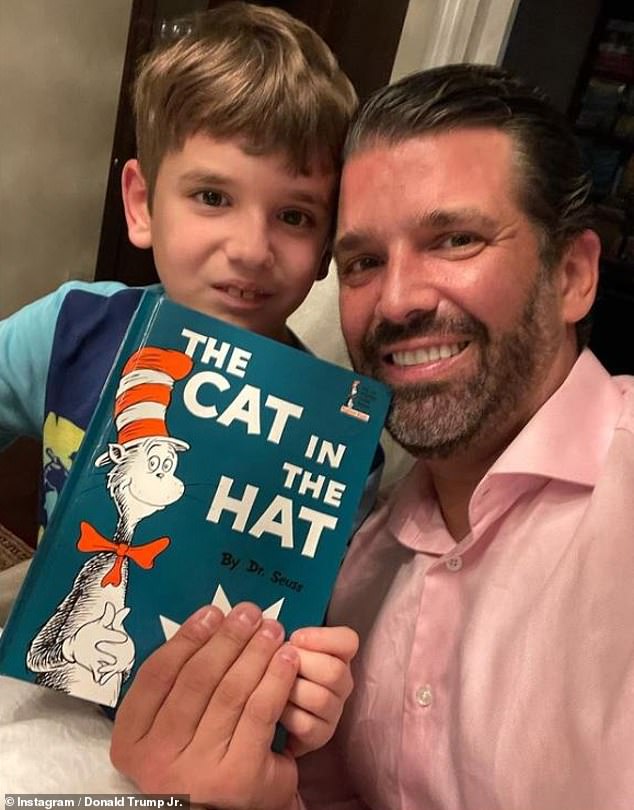 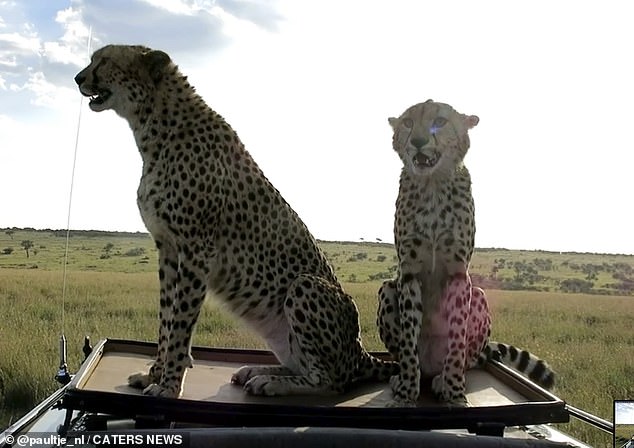 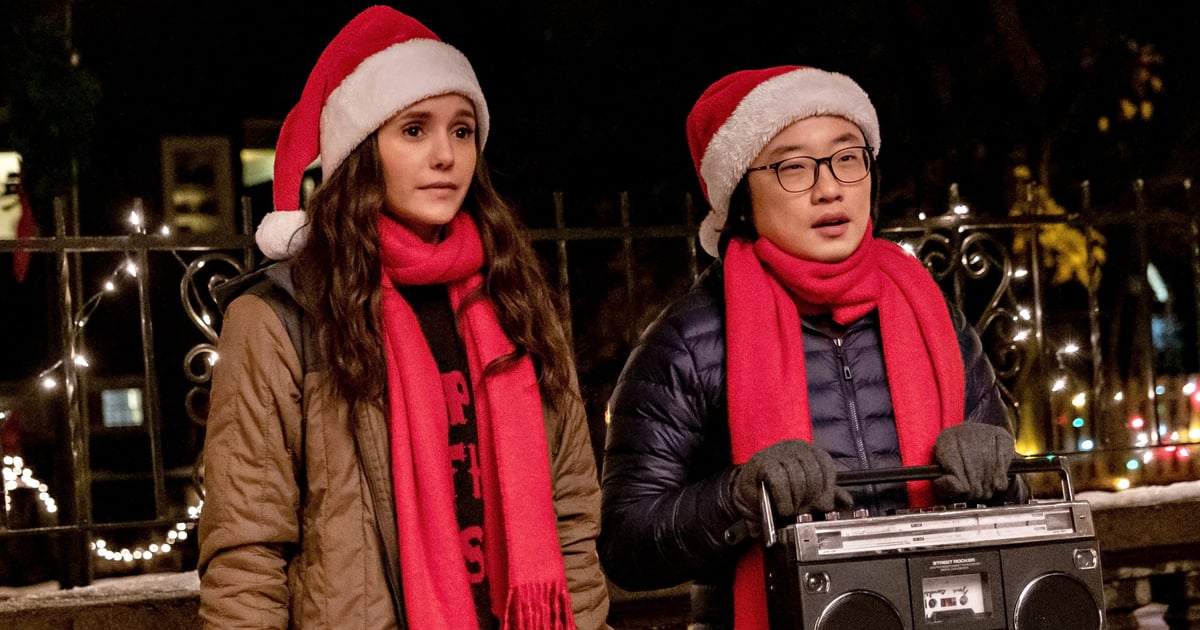 Jimmy O. Yang Already Has the Perfect Pitch For a Love Hard Sequel, So Let’s Make It Happen

Mother-of-one, 20, attacked by crowd in Delhi, India after being gang raped and tortured [Video]
39 mins ago

Britney Spears’s Spitfire Spirit, Explained by an Astrologer
58 mins ago