Amanda Knox has revealed she has sent messages to the family of former friend and roomate Meredith Kercher, who she was wrongly accused of murdering in Italy, saying she wants a relationship with them.

Knox also said that she finds herself thinking ‘oh my god, it could have been me’ every year around the time of the anniversary of the 21-year-old’s British student’s death.

But now, after having a daughter, she also says that she puts herself in Meredith’s mother’s shoes.

On November 1 2007, Meredith – an exchange student from the University of Leeds – was murdered in Perugia, Italy, where she was studying at the time.

Knox and her former boyfriend, Raffaele Sollecito, were later jailed, before eventually being released from prison in 2011 following an appeal against their conviction.

Knox had her conviction for the murder of her former roommate overturned by the Italian Supreme Court in 2015 after serving four years in jail.

A local man, Rudy Guede, was convicted in a separate trial after his DNA was found on Kercher’s body and in the room where she died.

Amanda Knox (pictured speaking in 2019, file photo) has revealed she has sent messages to the family of former friend Meredith Kercher, who she was wrongly accused of murdering, saying she wants a relationship with them 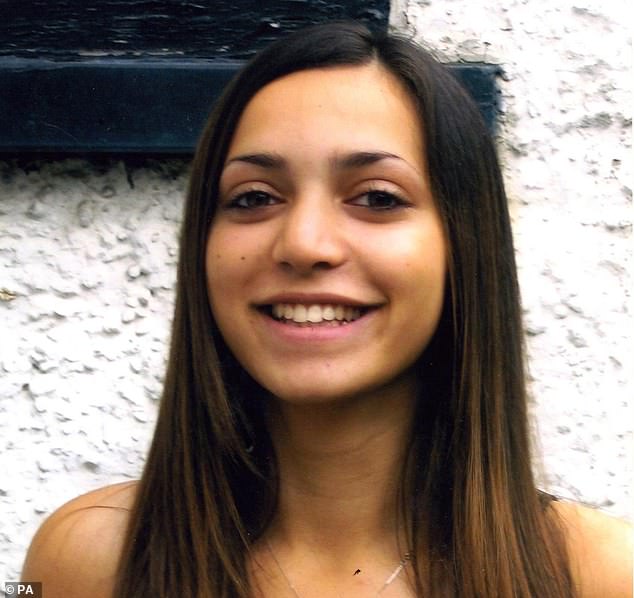 It’s now over 14 years since 21-year-old student Meredith Kercher was raped and killed in a brutal attack in the apartment they shared in the Italian city of Perugia, on November 1, 2007

He was sentenced to 16 years in prison in 2008, but was released in December 2020 and will spend the rest of his sentence doing community work.

Asked if she had spoken to Kercher’s family yet, Amanda – now back in her native US – said: ‘No, not yet. Not yet is my sort of position because like I know that it’s a complicated situation. I know that at least in the past like it’s unclear to me at this point how they feel about me.

‘And I don’t want to like force a relationship on them if it’s traumatic for them.

‘So I have sent messages to them through intermediaries telling them I want to have a relationship with you. I want to talk to you. And I’m waiting to see if that’s something that they want too.

‘That’s why I have really complicated feelings about her killer, Rudy Guede, because I’ve spent time in prison now too. Because he’s out.’

Guede was convicted in 2008 over Kercher’s death but he was released from prison at the end of last year, and will serve the final years of his 16-year sentence doing community service.

Amanda, who became known as ‘Foxy Knoxy’ in the press as the court case in Italy drew international attention, said: ‘I know that he was a very young man when he made this colossal horrible decision to rape and murder Meredith.

‘I don’t know how he feels about that today. I would hope that he regrets that. He hasn’t actually shown that he acknowledges what he did, and he hasn’t like admitted to it and asked forgiveness, so it doesn’t give me a super hopeful feeling that he truly feels rehabilitated even.

‘Maybe he feels like a f***ing victim too because he was a young guy who was abandoned by his dad, brought like foster care in Italy (correct), didn’t like have a great thing going for him and he sort of spiralled out of control going from burglary, to burglary, to burglary, until he majorly, majorly f***ed up.

Knox then lamented the fact that her name became synonymous with Meredith’s killing, and continues to be despite her being completely exonerated. 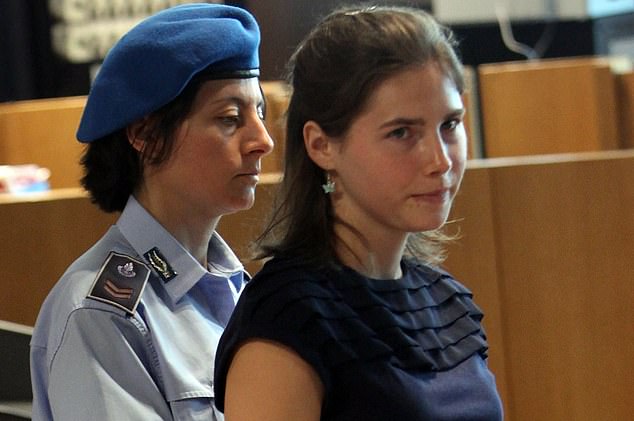 Amanda Knox (pictured in an Italian court in 2009) and her former boyfriend, Raffaele Sollecito, were later jailed, before eventually being released from prison in 2011 following an appeal against their conviction. She was fully exonerated in 2015 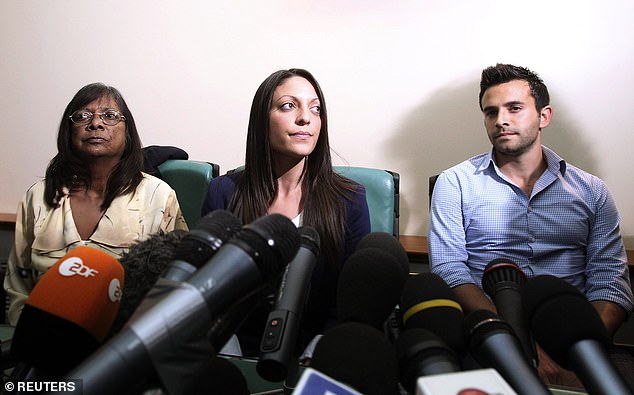 ‘His name is not the one that is affiliated with this horrible crime. Mine is. I wish that I could have a better word, but I think if I was going to be totally honest I’m angry, angry, and I’m still angry. That doesn’t mean I can’t have compassion for him but I am angry.

‘I don’t think that my name should ever have been associated with his actions, and the fact that no-one seems to really care about him, given that they were his actions, really bugs me out.

‘And maybe my anger is a little bit sort of misdirected at him, because of all of the people not seeming to care that it was him.’

Knox said she thinks about Meredith a lot around the anniversary of her murder.

Asked on the Call her Daddy podcast on Wednesday if she thinks about Meredith, she said: ‘It changes from the time of year. I think of her every time we come on to December 4, when I was first convicted. There are moments in the case that are very, very vivid to me.

‘As much as my identity has been usurped by like this whole horrible tragedy, talk about her identity. She never got a chance to even fight back against a false narrative about her because she’s gone.

‘I’m especially thinking about that now that I’ve had a daughter because like on the anniversary of her death for the past many, many years, 14 years, I’ve always sort of put myself in her shoes, and thinking like ‘oh my god, what must it have been like? What were her last moments ever as a person. Horrible, horrible moments. Thinking ‘oh my god, it could have been me’.

‘And this year I couldn’t help but put myself in her mum’s shoes, and thinking ‘oh my god, if that happened to my baby’. What do you do? I can totally understand how her mum would have willingly taken her daughter’s place if she could, but she couldn’t.’

In September, Knox had a baby girl Eureka Know Robinson with husband, Christopher Robinson, who she married in 2018.

She said she considered not using the name Knox for Eureka, and had thought about changing her own in the past. 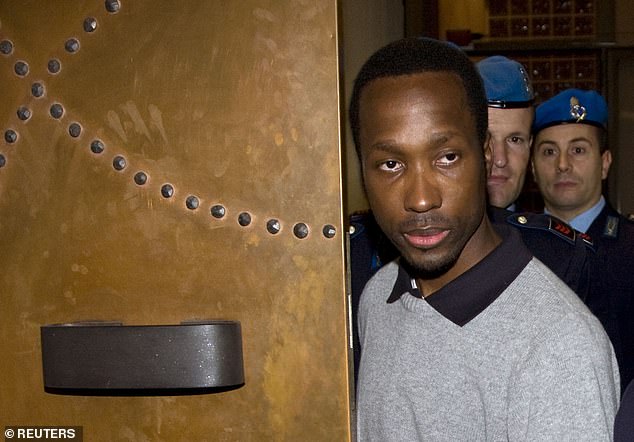 A local man, Rudy Guede (pictured being escorted by police in Italy in 2007), was convicted in a separate trial after his DNA was found on Kercher’s body and in the room where she died. He was sentenced to 16 years in prison in 2008, but was released in December 2020 and will spend the rest of his sentence doing community work

‘Like I’m pushing back and I’m trying to say ‘no, it’s not my fault, there’s nothing wrong with me’, and therefore my daughter can embrace the fact that I am her mum even while I’m like trying to protect her from all these forces that are ultimately beyond my control.’

Asked if she’d considered changing her own name ever, she said: ‘No, in the same way that I never remotely considered taking a plea deal because I didn’t f***ing do it, and so no.’

Speaking earlier this month, Knox said she faces an ‘ongoing struggle’ to live with the public’s ‘made up version of herself.

As details of the case built up, attention quickly turned to Knox in what has been described as an attempt to build a narrative of her being a ‘sexually voracious femme fatale’ and of she and her then-boyfriend as prime suspects.

Media coverage dubbed the then 20-year-old US student as ‘Foxy Knoxy’, after a nickname she already had, and she was referred to at the time as a ‘sex-mad American party girl’ and an ‘evil temptress’.

‘Meredith was pitched as this virginous Madonna character and I was portrayed as this sexually obsessed lustful uninhibited whore,’ she told radio host Emma Barnett on Tuesday.

‘I think that there was an incredible violation of my privacy. But also a capitalisation upon my identity that often had nothing to do with me,’ she told Barnett.

‘People vehemently stood for one side or the other and were unable… again there was the sense of confirmation bias you see what you want to see.’ 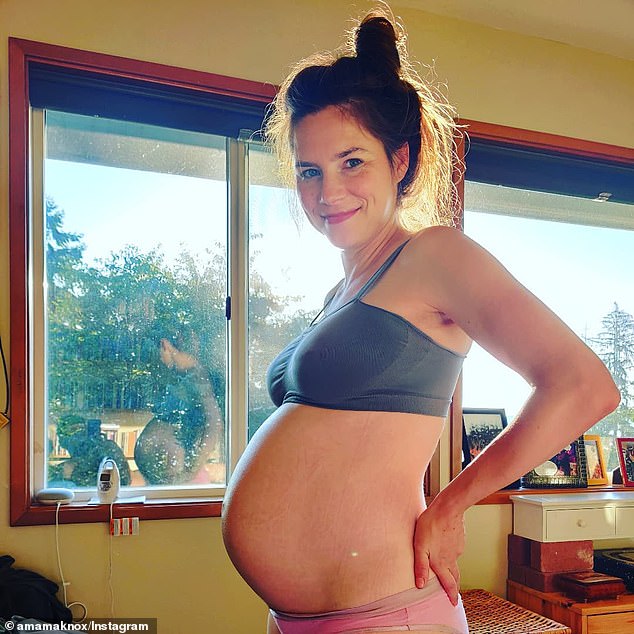 In September, Knox had a baby girl Eureka Know Robinson with husband, Christopher Robinson, who she married in 2018. Pictured: A pregnant Knox (file photo)

Knox said she was speaking out about her ordeal after the release of Stillwater – a Hollywood movie based on a fictionalised version of the events surrounding the murder of Ms Kercher.

When asked by Barnett what she would say to actor Matt Damon, the lead in the movie, Knox said: ‘We should talk. We can have a conversation. I’m not going to judge you. Let’s recognise something real is happening here’.

Knox said the movie was, like the press, guilty of portraying her ‘not really as a human being but as an idea of a person’.

‘They (the press at the time of the case) were making Meredith into this perfectly invisible ideal victim to never name again,’ Knox said. ‘It’s fascinating to me the number of times Foxy Knoxy was in the headline, but Meredith was not.

‘Just the idea of a sexually deviant violent woman was enough to get people so riled up that they didn’t care about the truth anymore.

‘And that is an insane problem, and that is something that I don’t think has really really been addressed. How justice was thwarted because of our obsession with female deviancy and female sexuality.’

Speaking of how the case would have been viewed today – particularly after the MeToo movement, she said: ‘It’s interesting. I think that it would be… I would hope that people would have been more sceptical about that portrayal of events today. 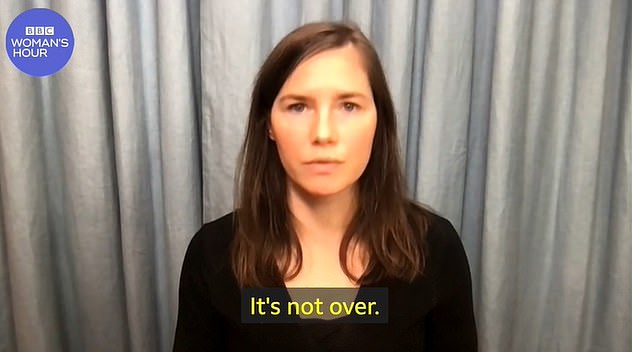 Speaking BBC Radio 4’s Woman’s Hour, Amanda Knox (pictured during the interview) said the media scrum following the conviction and later release made her lose control of her identity

‘That said, I think that social media was already quite active at the time of my case and had a huge impact in how the case played out.

‘And if anything it has become even more about tribalism, which is also a big problem where people vehemently stood for one side or the other and were unable… again there was the sense of confirmation bias you see what you want to see.’

‘So I very much felt like as I was coming into the world I was in conversation constantly with a made-up version of myself that was in people’s minds before they ever encountered me as a real person.

‘And that’s an ongoing problem for me.

‘It’s an ongoing struggle for me that has… it’s not over.’

Investing in Your Health: 6 Reasons Why Meal Delivery is Worth It | Luxury Activist 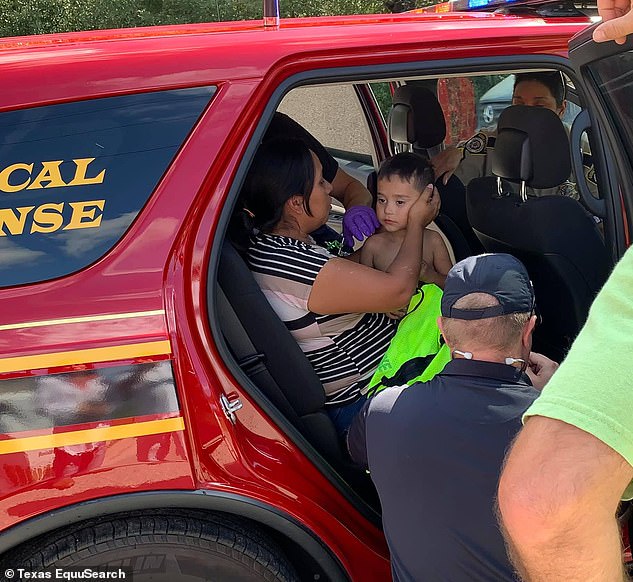 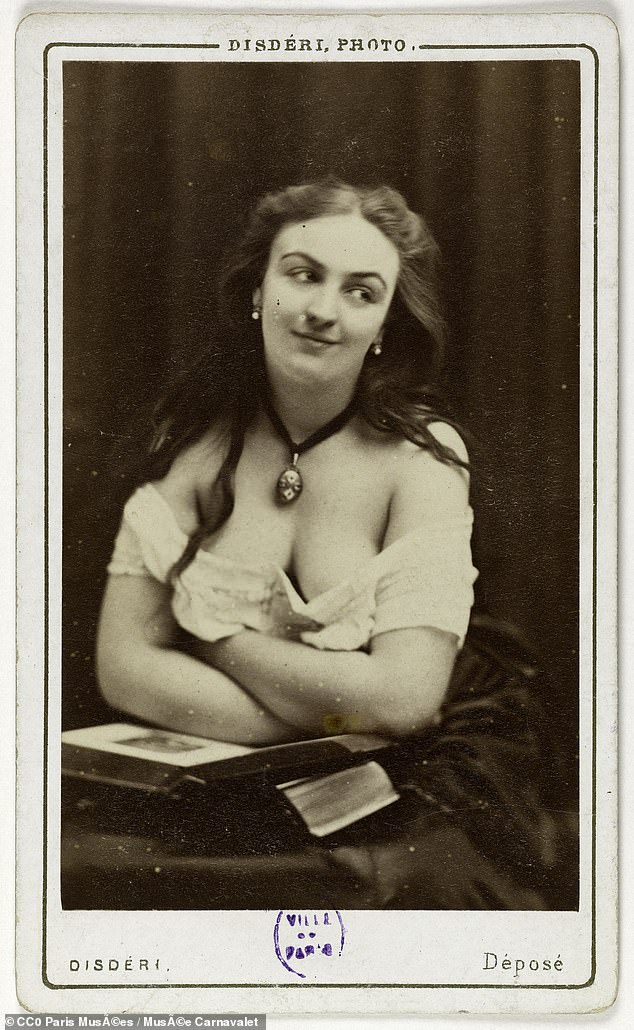 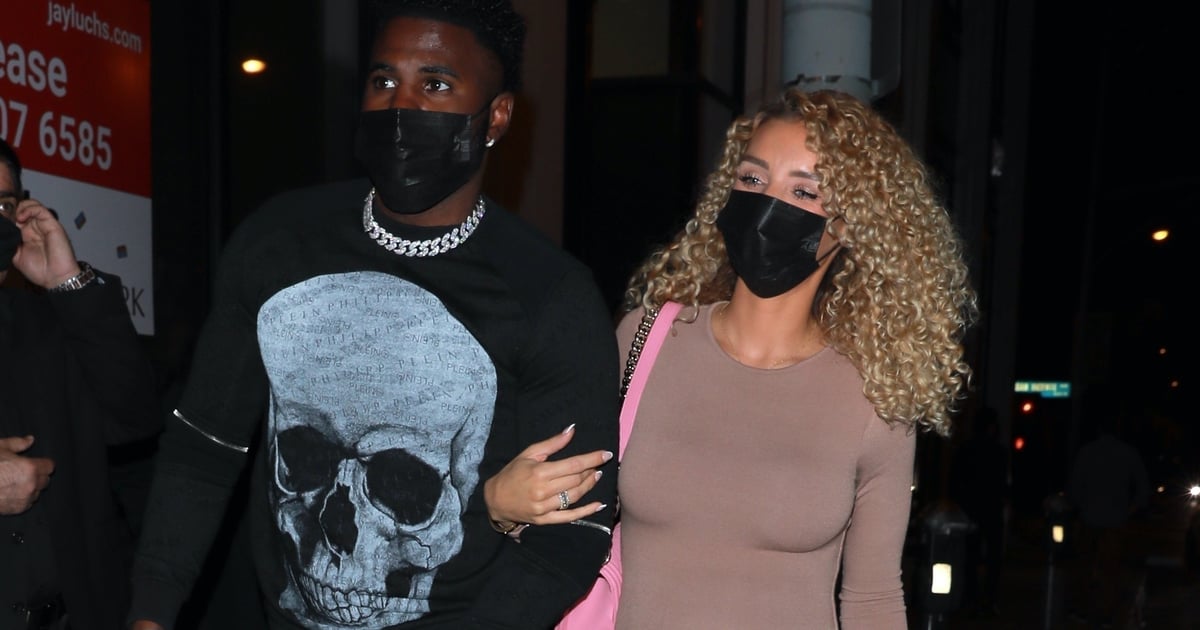 Jason Derulo and Jena Frumes Are Parents! See the First Photos of Their Baby Boy 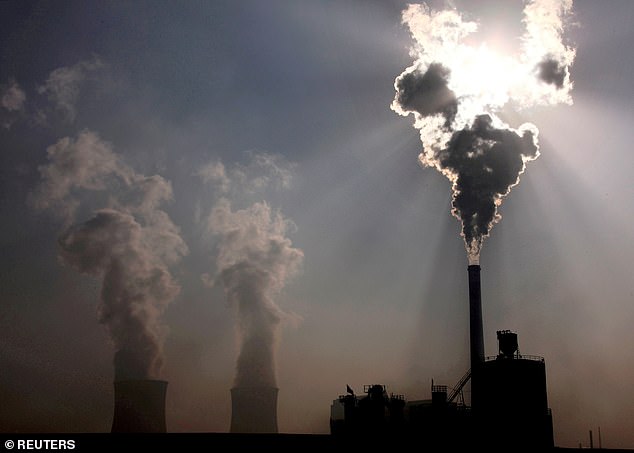 Mother found bludgeoned to death in her bath, her daughter unconscious hours after she called 911
26 mins ago