Infowars host Alex Jones’ wife struck him ‘over 20 times’ – including with a soap bottle – and tried to hit him with a five-pound stone ball causing him to ‘fear for his life,’ according to a police report from their Christmas Eve fracas that was released Tuesday.

Erika Wulff Jones, 43, who looked somber and tearful in her mugshot taken after being arrested for domestic violence last Friday – apparently attacked the right-wing conspiracy theorist for cheating on her.

Pictured with extra long eyelashes, manicured eyebrows and highlights in her hair, Erika was arrested after allegedly assaulting her husband at their home in Austin, Texas.

According to the Travis County arrest affidavit, during an initial 911 phone call with police, Jones told an emergency dispatcher that his wife had struck him over the head repeatedly and was ‘holding a polished club in her hand’ and attempting to ‘hit him with it,’ according to the report.

Jones further claimed his wife had struck him ‘several times’ after police arrived at the house, with an officer noting the far-right radio host’s hair was ‘red’ and ‘wet.’

Jones later told cops that ‘Erika had hit him with both closed fists and open hands on his head in front of their child,’ the affidavit read. 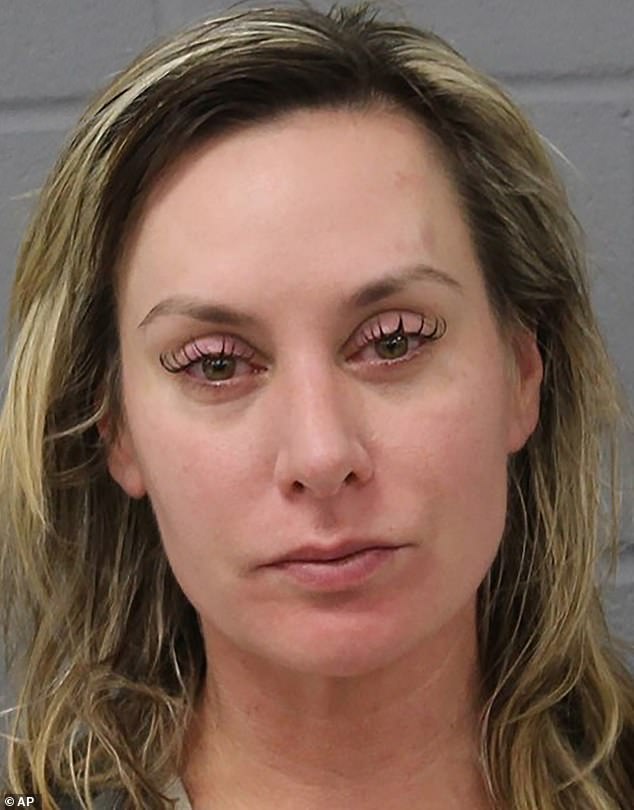 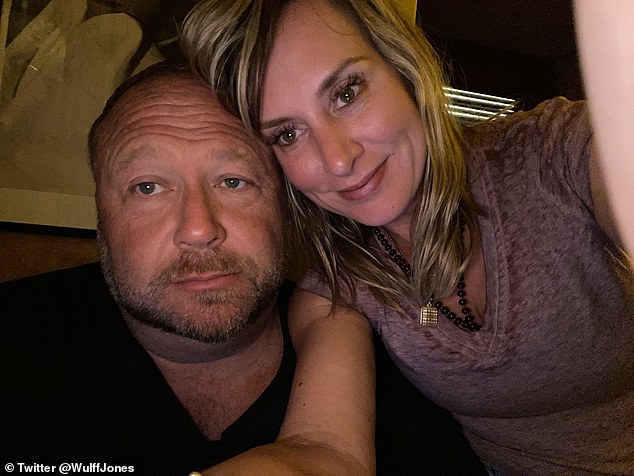 Erika Wulff Jones and husband Alex Jones in better times. He said the incident was caused by a ‘medication imbalance’

Erika allegedly had accused him of ‘cheating on her,’ according to Jones, leading to a violent altercation as the duo bathed their child. Jones also has three children from a previous marriage.

She reportedly struck Jones ‘over 20 times,’ including once over the head with a bottle, ‘possibly shampoo,’ the arrest report stated, causing the contents to get on his face and ’cause burning to his eyes.’

‘(He) stated he tried to get away from her in the master bedroom, and she followed him with a stone ball trying to strike him.’

Jones was at that point ‘in fear for his life,’ he told officers.

Police located a stone, weighing about five pounds, in the master bedroom, which was ‘consistent’ with the alleged weapon.

Jones told police that his wife, who officers noted had ‘a strong odor of alcohol’ on he breath, never hit him with the stone, but ‘threw it at his head, missing by inches.’

Alex Jones, the Infowars founder who faces financial ruin after losing four defamation lawsuits brought by parents of victims of the Sandy Hook school shooting, said after his wife’s arrest that the incident stemmed from a ‘medication imbalance.’

Travis County Sheriff’s deputies took Wulff Jones into custody and booked her into an Austin jail around 8.45pm on Friday.

She faces misdemeanor charges of assault causing bodily injury to a family member and resisting arrest, search or transport.

After spending Christmas in custody, she was released the next day on $3,000 bail for each of the two charges. 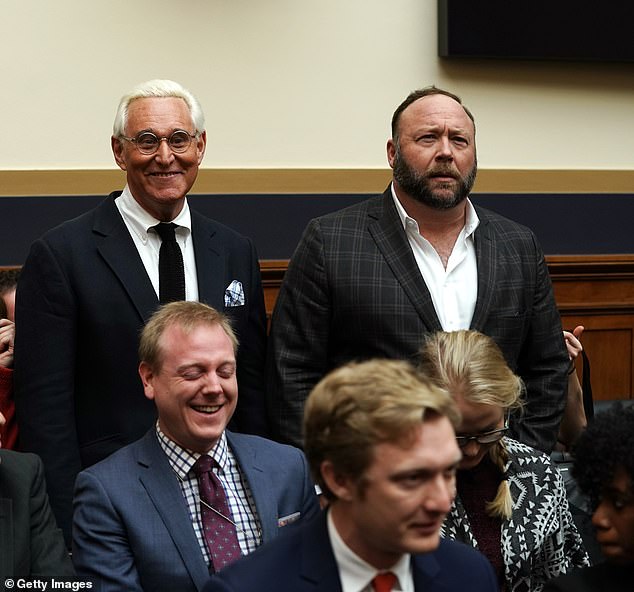 Infowars founder and conspiracy theorist Alex Jones, right, has sued in order to block a subpoena issued for him to testify about the events. (Jones pictured in 2018) 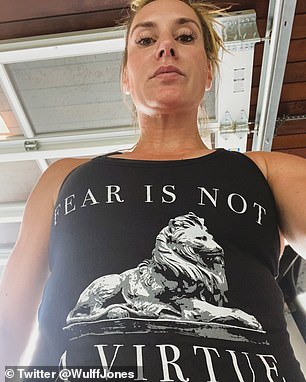 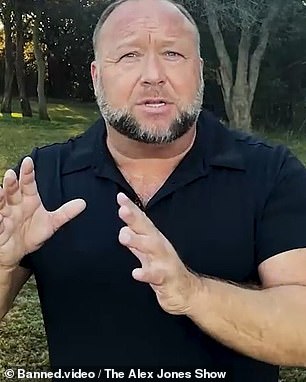 Erika, left, was arrested at the couple’s home in Austin, Texas. Jones did not say who the victim of the assault was and called the episode a private family matter

Jones declined to say whether he’d been injured or elaborate on what happened beyond that he believes it was related to his wife’s recent change of medication.

‘It’s a private family matter that happened on Christmas Eve,’ Jones told The Associated Press in a brief interview on Christmas Day.

‘I love my wife and care about her and it appears to be some kind of medication imbalance.’

An attorney for Wulff Jones did not immediately respond to a request for comment.

The incident comes as the right-wing conspiracy theorist faces financial ruin after being found guilty in November in four defamation cases over his claims that the Sandy Hook school massacre was a ‘giant hoax’ aimed at increasing gun control.

His conviction is a sweeping victory for the parents of eight people killed in the Newtown massacre. On December 14, 2012 gunman Adam Lanza, 20, killed 20 first-graders and six teachers at the Connecticut school. Lanza fatally shot his mother at their home before going to the school, and later killed himself as police arrived.

The conviction combines with three rulings in Texas last month that found Jones liable for damages in defamation lawsuits that stemmed from his statements about the Newtown massacre. A jury has not awarded damages yet.

Though Jones’ finances are murky, with nearly all of his income thought to be derived from the sale of dubious health supplements to his loyal followers, he is thought to have a net worth of roughly $5 million. 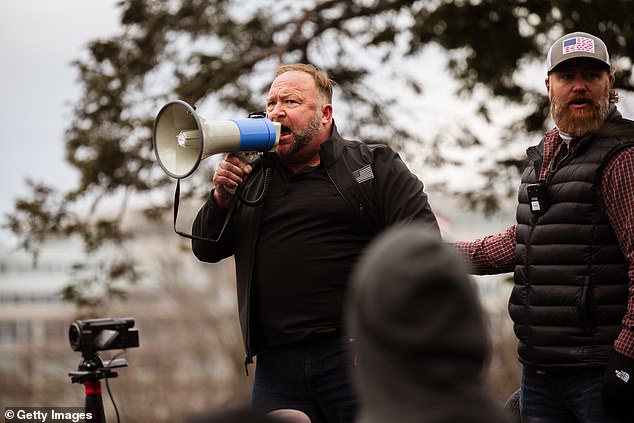 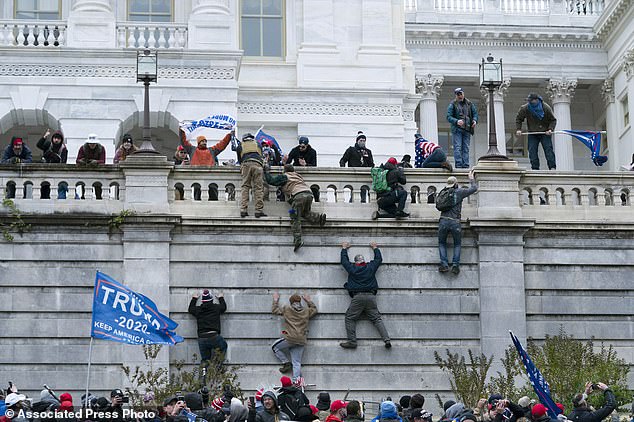 The incident comes as Jones sued last week seeking to block subpoenas he’d been issued by the House committee investigating the January 6 riot at the US Capitol.

He said he did not want to testify before the committee because he fears Congressional leaders will accuse him of lying under oath.

‘I don’t want to testify before them because they will lie and say I lied,’ Jones said.

Jones spoke at a rally in support of then-President Donald Trump that proceeded the riot, and his Infowars colleague, Owen Shroyer, was charged with crimes related to it in August.

Shroyer has said he’s ‘innocent of the charges.’

Jones said his wife’s arrest ‘doesn’t concern my politics’ and that ‘it wasn’t some kind of personal hateful thing or anything.’

New Jersey Gov. Murphy is blasted for traveling to Costa Rica as COVID cases spike in his state 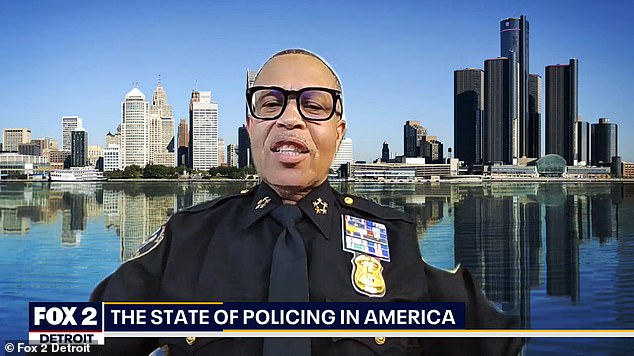 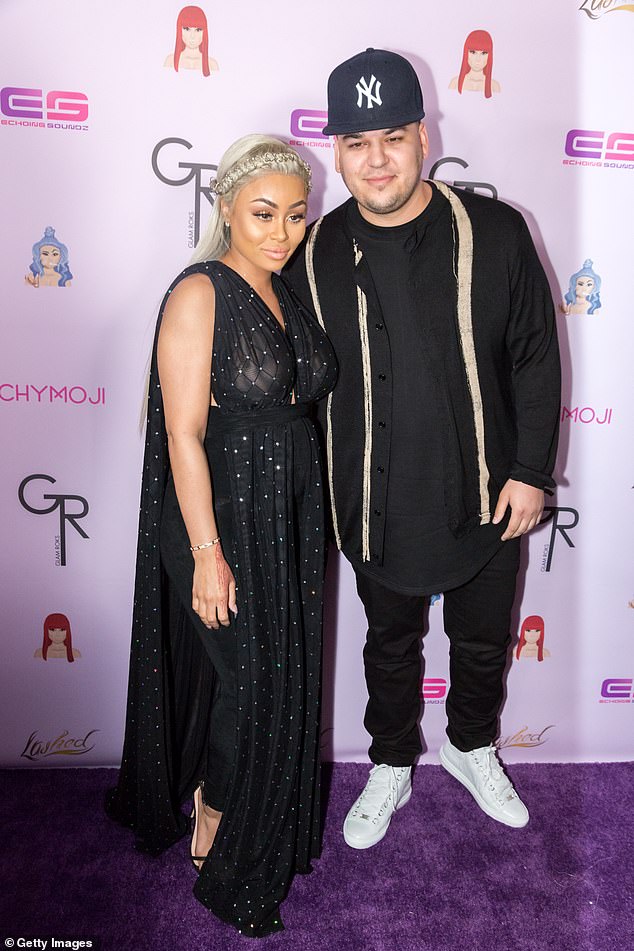 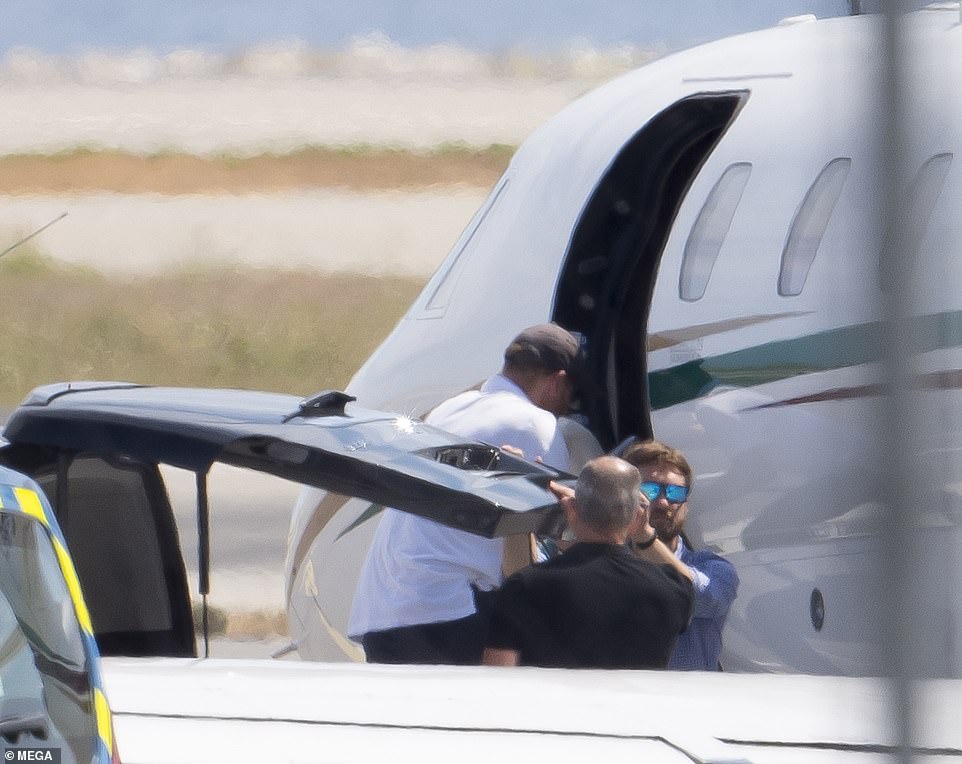 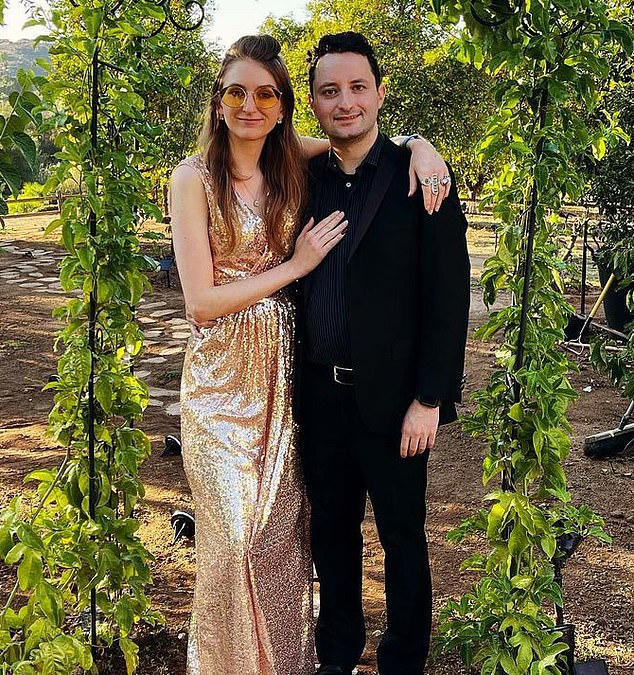 Aave Price Prediction for Today, 30 November: AAVE May Experience a Bullish Reversal at $56 Level
23 mins ago