In May, a group of more than 120 retired military officers wrote to President Joe Biden to tell him his election was less than legitimate – while questioning his mental acuity.

The letter echoes former President Donald Trump‘s claims of widespread election fraud – which have not been borne out in the courts.

‘Without fair and honest elections that accurately reflect the ‘will of the people’ our Constitutional Republic is lost,’ the letter from retired officers says.

The group calls itself ‘Flag Officers 4 America’ and consists of retired military officers including generals and admirals.

‘The FBI and Supreme Court must act swiftly when election irregularities are surfaced and not ignore them as was done in 2020,’ they wrote.

The letter, called an ‘Open Letter from Retired Generals and Admirals,’ was reported by Politico.

It echoes Trump’s claims that absentee ballots are not secure as it goes after Biden, who serves as Commander in Chief of the military.

‘Today, many are calling such commonsense [voter ID] controls “racist” in an attempt to avoid having fair and honest elections. Using racial terms to suppress proof of eligibility is itself a tyrannical intimidation tactic,’ they write.

The retired officers raise doubts about Biden’s mental capacity – and reference Speaker Nancy Pelosi’s move to get assurances about the nuclear codes in the days after the January 6 MAGA riot. 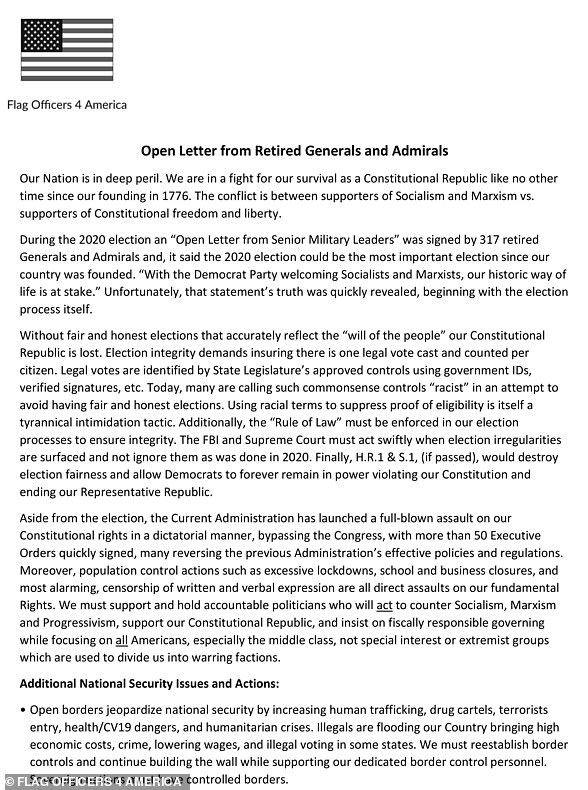 The ‘Open Letter from Retired Generals and Admirals’ blasts Biden for ‘excessive lockdowns’ and ‘censorship of written and verbal expression,’ while questioning his mental acuity 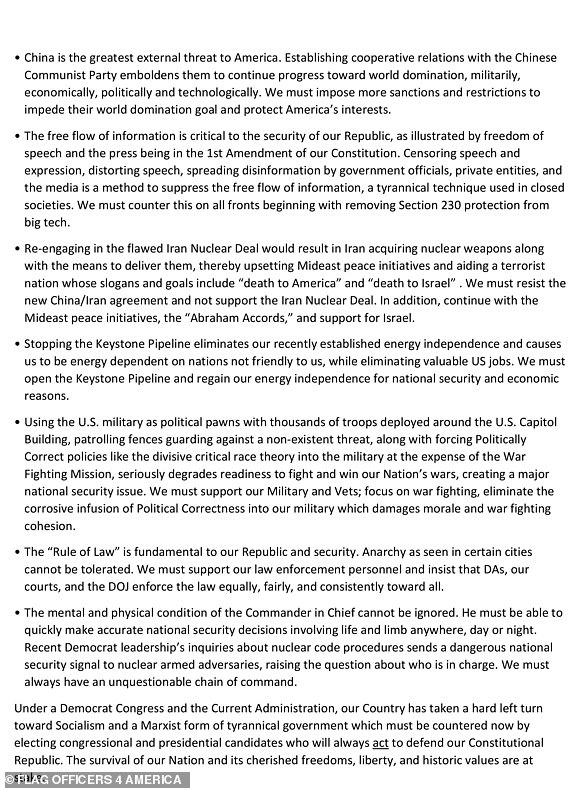 The retired officers hit the Iran nuclear deal and even slap Biden for stopping the Keystone Pipeline project, while saying ‘anarchy’ in cities cannot be tolerated

‘The mental and physical condition of the Commander in Chief cannot be ignored. He must be able to quickly make accurate national security decisions involving life and limb anywhere, day or night,’ they write.

‘Recent Democrat leadership’s inquiries about nuclear code procedures sends a dangerous national security signal to nuclear armed adversaries, raising the question about who is in charge. We must always have an unquestionable chain of command.’

The group Flag Officers 4 America call themselves ‘retired military leaders who pledged to support and defend the Constitution of the US against all enemies, foreign and domestic.’

The letter is a counterpoint to impactful public statements by national security officials who weighed in for Biden during the campaign.

One such effort came when 10 former secretaries of Defense penned an extraordinary op-ed in the Washington Post warning there is ‘no role’ for the U.S. military in the outcome of U.S. elections, and stating the importance of a peaceful transfer of power.

That letter came three days before the Capitol riot.

The signers of the attached their names to the letter. Among them was Maj. Gen. Joe Arbuckle, who served in Vietnam and later commanded the US Army Industrial Operations Command (IOC) at Rock Island, Illinois.

Arbuckle, who organized the effort, told Politico: ‘Retired generals and admirals normally do not engage in political actions, but the situation facing our nation today is dire.’

He continued: ‘We are facing threats greater than at any other time since our country was founded. To remain silent would be a dereliction of duty.’

The effort drew immediate pushback from military members who lamented people who wore the uniform jumping into an organized political effort.

Jim Golby, an expert in civil-military relations, blasted the effort in Politico as a ‘shameful effort to use their rank and the military’s reputation for such a gross and blatant partisan attack.’

Also ripping the effort was retired Adm. Mike Mullen, who served as chair of the join chiefs of staff and outranks those on the letter, said: ‘I think it hurts the military and by extension it hurts the country. He cast it as ‘right-wing Republican talking points.’

‘This is really, to my mind, a classic very bad example of the erosion of civil-military relations in America, which is the bedrock of our democracy,’ another retired military leader, Army Col. Jeffrey McCausland, told HuffPost.

Members of the military vote in elections and have protected constitutional rights, but military leaders have warned of the risks of intruding in domestic politics.

In the run-up to 2020, retired Gen. James Mattis denounced Trump, whom he served as Defense Secretary, in a June response to the events at Lafayette Square. ‘We must reject and hold accountable those in office who would make a mockery of our Constitution,’ Mattis wrote.

Other signers of the anti-Biden letter included include Vice Adm. John Poindexter, who was convicted in the Iran-Contra Affair.

Also signing on was Army Brig. Gen. Don Bolduc, who lost the Republican primary in 2020 to challenge Democratic Sen. Jeanne Shaheen, and is planning another Senate run.

Another signer, Lt. Gen. William G. Boykin, who was termed anti-Muslim for his comments to a Christian congregation, CBS previously reported, after Boykin said of a Somali warlord: ‘I knew that my God was bigger than his.’ 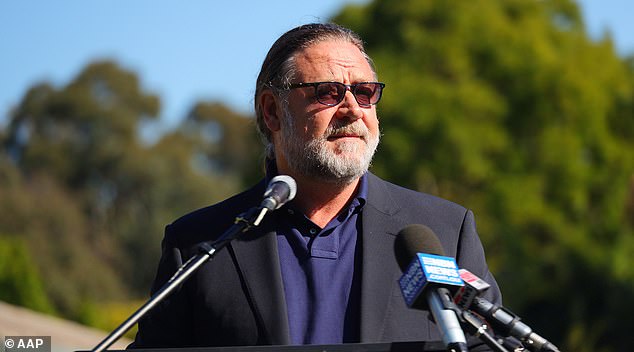 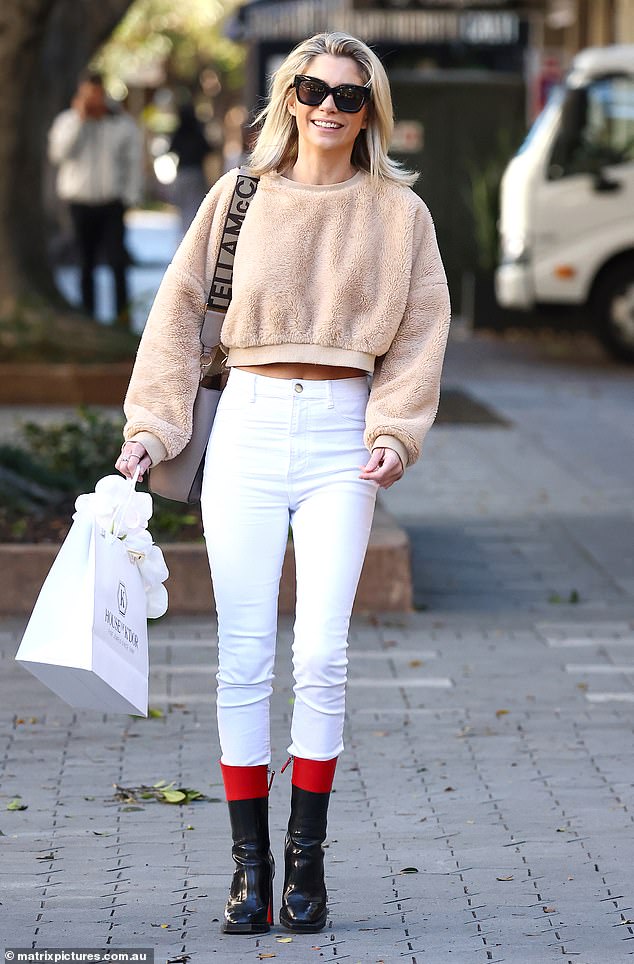 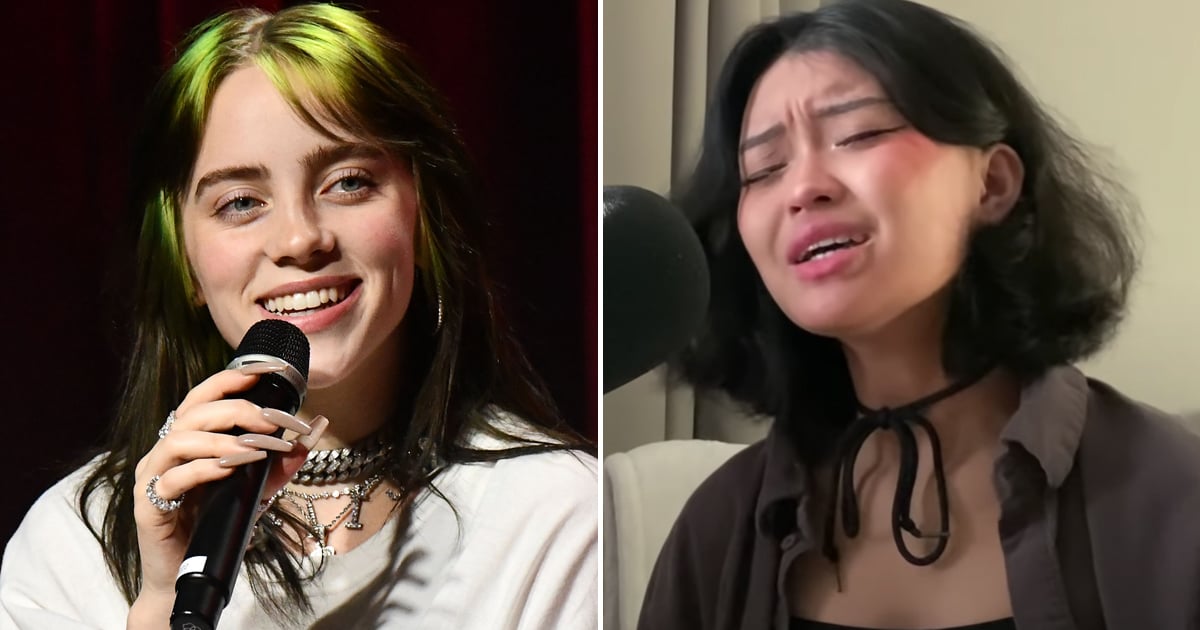 More Please: This Enchanting Cover of Billie Eilish’s “Your Power” Lives in My Head Rent-Free 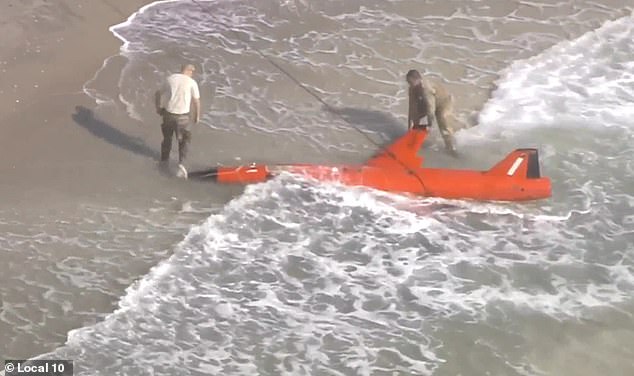